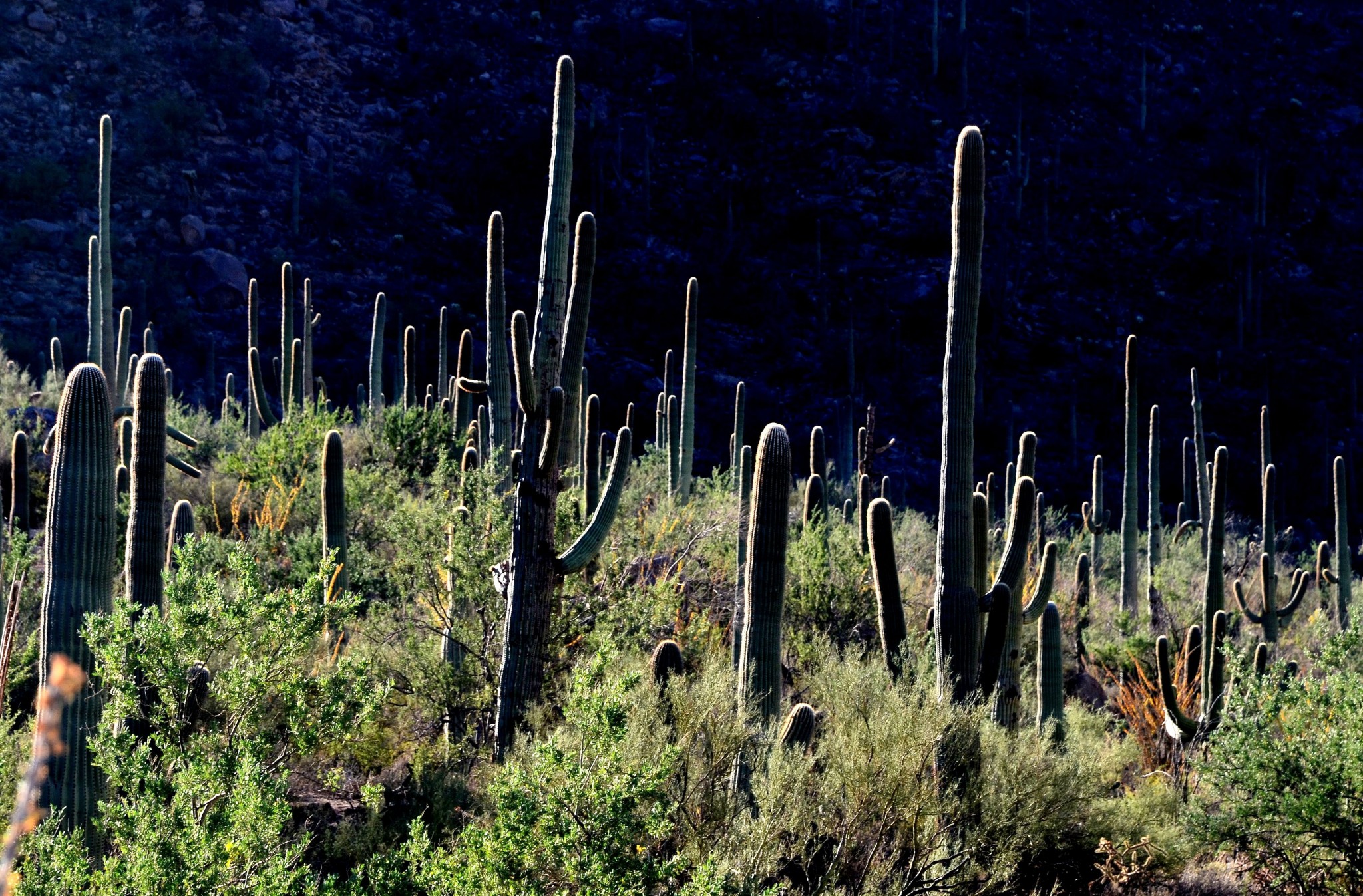 Welcome to Road Trips with Tom’s first vacation guide.  This post offers you an itinerary for a complete road trip vacation.

It’s a four- or five-day trip around southern Arizona, beginning and ending in Tucson.  This is a winter or spring trip you can take any time from December through April.  Here’s more:

Can’t go this year or early 2016?  This post will be archived in Road Trips with Tom under November 2015 so you can take this trip the following year.

Before starting on the itinerary, you’ll need to get to Tucson.  For many of you, that means flying then renting a car.  If you live in Los Angeles, Orange County or San Diego, you’ll probably drive.  I’ve included driving directions to Tucson using the shortest, most interesting route in the Appendix at the end of this itinerary.

You’ll find a wide variety of hotels in the Tucson area.  For this road trip, it will be most convenient if you stay close to Interstate 10.  Hotels near the airport are a good bet.  I would also recommend the Country Inn and Suites at Exit 257, which has extremely high Trip Advisor, Expedia and Yelp review scores.   You’ll find a good selection of restaurants around the University of Arizona.  Check Yelp.

If you’re coming from somewhere cold, you may want to simply relax by the pool and enjoy the desert sunshine before starting out.  That will make this itinerary five days long.

Once in Tucson, exit at Speedway Blvd. and turn west.  Speedway soon crosses Gates Pass and descends into a dense forest of stately saguaro cacti.  The saguaro, the signature plant of the Sonoran Desert, can be found only in western Arizona and northern Mexico.  Follow the signs to the Arizona-Sonora Desert Museum.  This is a combination botanical garden and zoo that showcases the native plants and animals of the Sonoran Desert.  It’s a tremendously popular museum that’s ranked by Trip Advisor as Arizona’s #2 attraction behind only the Grand Canyon.  Plan on spending at least three hours here.  You’ll be doing a lot of walking, and it’s a good idea to protect yourself against sunburn.

Your afternoon destination is Old Tucson, which is practically next door to the desert museum.  Old Tucson is a movie studio and theme park that’s been used as the location for dozens of movies and TV shows.  It also features rides, historic tours, shops, restaurants, live saloon musicals and mock gunfights in the streets.  Kids love this place.  Hours are 10-5 daily during December and January, 10 to 6 February through May.  Admission is $17.95 for adults and $10.95 for children 4-11.  Web:  www.oldtucson.com

This itinerary offers you multiple options.  All the choices are good.

Take Interstate 19 south from Interstate 10.  For some reason that probably makes sense to somebody, distances along Interstate 19 between Tucson and the Mexican border are measured in kilometers.  Not long after leaving Tucson, you also leave the domain of the saguaros.

There are three possible stops along the way, plus one more option at the end.

4.  Dinner and shopping in Nogales, Mexico. I-19 takes you directly to the border, where you can park for $5 or so and walk across.  You’ll find lots of shops selling excellent crafts from all over Mexico, as well as the usual tourist junk.  La Roca is the best-known restaurant, but you can find plenty of restaurant listings and reviews onYelp. Is it safe?  There are arguments on both sides.  It’s your decision whether or not to visit Nogales, Sonora.  Check the latest web reports before deciding.

For overnight lodging, the best places in town are the Holiday Inn Express and the Candlewood Suites.  Both are just west of  I-19 at Exit 4.

From the southern end of  I-19 near the border crossing, take Grand Ave. north about a mile, then head east on SR 82 toward Patagonia.  This is a pretty drive through some of Arizona’s primo cattle country.

Where SR 82 crosses the San Pedro River, a short side road leads to the ghost town of Fairbank, with several intact structures and interpretive signs.  It’s a good place to stretch your legs and learn about the area’s history.

SR 82 deadends at SR 80.  Turn right and go about three miles to the legendary Old west town of Tombstone, known as “the town too tough to die.”  Tombstone was founded in 1879 and made its reputation and fortune from silver mining.  Here you’ll find what use to be a lawless mining town that’s been preserved, rebuilt and tarted up for the tourist trade.

It’s a fun place to visit, with shops, restaurants and historic sites.  Stop in Big Nose Kate’s saloon for a sasparilla, see the gallows at Tombstone Courthouse State Historic Park, or take a stagecoach ride.  Don’t bother with the OK Corral, which has cheesy plyboard cutouts representing the Earps and Clantons.  Tombstone is worth a couple of hours and is a good place to have lunch.  If you want to stay overnight, the Lookout Lodge and Tombstone Grand are the top-rated lodgings.

Stay on SR 80 another 28 miles to incomparable Bisbee, one of the most colorful old mining towns in the West and my favorite small town in Arizona.  Unlike Tombstone, Bisbee was a copper town, complete with the cavernous Lavender Pit on the east edge of town.  The economy rose and fell with the Copper Queen Mine.  When it shut down for good, the town managed not only to survive; it thrived, attracting a hodgepodge of retirees, artists and other free spirits.  Bisbee was first settled in 1880.

Downtown Bisbee occupies narrow, winding streets in Brewery Gulch, with houses perched high above on steep hills.  The architecture includes Victorian houses and Art Deco buildings, including the Cochise County Courthouse and the Copper Queen Hotel, which has been in continuous operation since 1902.   You can stroll the streets and visit several shops, galleries and coffeehouses.  You can also take an underground tour of the copper mine. A distinctive feature of Bisbee is the array of colors used on the town’s public buildings and homes.

There are other, less expensive options, but the Copper Queen is a fun place to stay.  John Wayne was a frequent guest here.  You might even meet one of the resident ghosts.  Another offbeat lodging option is the Shady Dell, whose rooms are vintage Airstream trailers.

From Bisbee, continue east for 20 miles on SR 80, which parallels the Mexican border.  You’ll be turning left on US 191, but first, take a short side trip into the town of Douglas.  Follow Avenue G to 11th St., where you’ll find the Gadsden Hotel, a nondescript double-box structure on the outside that gives no hint about what’s inside its door.  Park and go into the lobby, with its Tiffany-style windows and amazing marble staircase and columns.  Truly spectacular!

Return to US 191, then turn right on SR 181 and follow it to Chiracahua National Monument.  Here, the Chiracahua Mountains’ volcanic rocks have been eroded into fantastic shapes, reminiscent (minus the color) of Bryce Canyon in Utah.  The visitor center is just down the road from the monument entrance.  Stop here to view exhibits and get information.  Then take the scenic drive, which winds six miles to Massai Point (elev 6,870 feet), which has tremendous views.  The monument has lots of hiking trails of varying lengths and degrees of difficulty.  What it doesn’t have are any visitor services other than a campground.  If you’re planning to do some hiking, buy picnic supplies in Bisbee or Douglas, then make use of one of the monument’s three picnic areas, including one at Massai Point.  Chiracahua National Monument currently does not charge an entance fee.

From Chiracahua National Monument, backtrack on SR 181 to SR 186, then turn right for 32 miles to the town of Willcox, where you’ll find full visitor services, as well as the junction with Interstate 10.  From Willcox, it’s about 90 minutes to Tucson.

That completes the itinerary for a four-day road trip.

If it’s March, and you’d like to combine this road trip vacation with a visit to spring training baseball games, continue another 110 miles on I-10 to Phoenix.  The game schedule is published on the internet and in major newspapers.  The venues are scattered all around the metro Phoenix area.  The most popular teams are the Cubs, Dodgers, Angels, Giants and Diamondbacks.  This year, you can add the World Series champion Kansas City Royals to that list.  For those teams, it’s wise to buy tickets on the internet before leaving home.  Simply go to the web site of your favorite team, where you can also get directions to the ballpark.

This section focuses on getting to Tucson.

You can run out of adjectives really fast when describing END_OF_DOCUMENT_TOKEN_TO_BE_REPLACED

Carhenge isn’t the end of the world . . . END_OF_DOCUMENT_TOKEN_TO_BE_REPLACED

Just as the Battle of Little Bighorn was a low END_OF_DOCUMENT_TOKEN_TO_BE_REPLACED