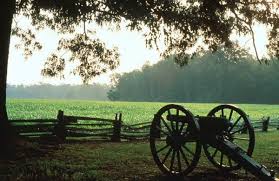 In April of 1862, it wasn’t so peaceful.  This was the site of the bloodiest battle ever fought on U.S. soil.  Today, you can tour the battlefield, view exhibits, visit the Shiloh National Cemetery and try to visualize what happened here over 140 years ago.

The nearest town of any size is Corinth, Mississippi.  Corinth has always been a crossroads.  In the days of the Civil War, it was a railroad junction of critical importance to the Confederate Army.  The Union Army sought to capture the Corinth junction and sever the rebels’ supply chain.

The Battle of Shiloh was one of the first major battles in the civil war’s western theater.  The two-day battle, April 6 and April 7, 1862, involved about 65,000 Union troops under Ulysses S. Grant and Don Carlos Buell and 44,000 Confederates under Albert Sidney Johnston and P.G.T. Beauregard.

The battle resulted in nearly 24,000 killed, wounded, and missing. The two days of fighting did not end in a decisive tactical victory for either side —the Union held the battlefield but failed to pursue the withdrawing Confederate forces. However, it was a decisive strategic defeat for the Confederate forces that had massed to oppose Grant’s and Buell’s invasion through Tennessee. After the Battle of Shiloh, the Union forces proceeded to capture Corinth and the critical railroad junction there.

The park is located on SR 22, just north of the Mississippi border.  For directions, go to www.nps.gov/shil/planyourvisit/directions.  It’s not referenced on the park’s web site, but a visit to Shiloh is easily combined with a driving adventure on the Natchez Trace Parkway.

Shiloh National Military Park is open daily except holidays from sunrise to sunset. 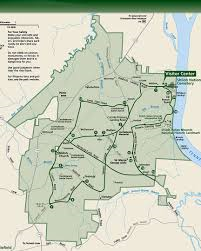 From the entry gate, drive east to Pittsburg Landing on the Tennessee River.  There, you’ll find the park’s Visitor Center (open 8-5 daily except holidays).  View the film and exhibits, and check if any ranger-led events are being offered.  Be sure to get a guide to the 12.7-mile tour road.  There’s also an available cell phone tour.

Now . . . I have a suggestion for you.  Find a quiet spot close your eyes, and try to mentally conjure up the sights,sounds and smells you’d experience on April 6 and 7, 1862.  If you can do this, it can be a powerful experience.  If not, then hop back into your vehicle, drive 110 miles west from Corinth to Memphis for some great barbecue!

Mmmm.  I can visualize that.  How about you?

Welcome to Benefit Street – the most impressive neighborhood of END_OF_DOCUMENT_TOKEN_TO_BE_REPLACED

This week, Road Trips with Tom steams down the mighty END_OF_DOCUMENT_TOKEN_TO_BE_REPLACED