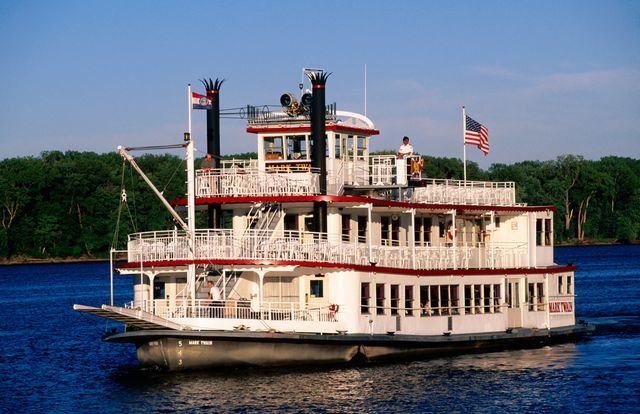 We’ll join Huckleberry Finn, Becky Thatcher and Tom Sawyer, and learn how a rather ordinary river port became a legend that draws visitors from all over the Midwest.

Actually, it’s not hard when one of your native sons is Samuel L. Clemens – later known as Mark Twain.  Clemens had a genius for observing people, then creating some of the best-loved characters in American fiction.

A former riverboat captain, Clemens became one of the top storytellers in the west.   He honed a distinctive narrative style – friendly, funny, irreverent, often satirical, and always eager to deflate the pretentious.  This colloquial style eventually became the distinctive voice of American literature.  For a brief biography of Mark Twain, click here:  https://www.biography.com/people/mark-twain-9512564

Like many towns that depend on visitors’ spending, Hannibal has numerous ways to extract your money, from a haunted house to a wax museum to a motorcycle display, and more.  However, the town also offers some worthwhile attractions most visitors won’t want to miss.

Let’s begin our visit by moseying around town and the nearby Mississippi River.  I suggest the Mark Twain River Cruise as a way to get our feet wet.   This sternwheeler has been operating here for 30 years and looks it.  No one will mistake it for the beautiful sternwheeler with the same name at Disneyland.  Still, the cruise is enthusiastic and fun.  Cruises depart daily at 11, 1:30 and 4, mid-June to early November.  Tickets are $20 for adults and $12 for children.  Phone (573) 221-3222.

Here’s a nice YouTube preview:  https://www.youtube.com/watch?v=t8TCfw-nCvs.  This video won’t win any awards, but it gives you a nice preview of Hannibal, especially the sternwheeler cruise.

Hannibal is relatively remote as a road trip destination.  It’s not on the interstate highway system.  The nearest major city, St. Louis, is two hours away.  Des Moines is three, and Kansas City four.  Chicago, at five hours away, is too far for a weekend visit.

Because of its geographic isolation and the area it draws from, Hannibal has become a weekend trip from nearby midwestern cities.  It’s a short-term destination – people don’t drive far, and they don’t stay long.

Yet Hannibal packs ‘em in, especially on weekends and holidays.

Now let’s get an overview of the town itself.  For that, we’ll ride with the Hannibal Trolley Co.  Hannibal, with a population of 17,000, extends westward from the river up a low bluff, where it meets generally level Missouri farmland.  The two- and three-story business buildings date from the 1870s and 1880s.

From its depot at 220 N. Main St., the trolley does a one-hour loop with 15 stops from 9-5 daily, April 15 to October 1.  Fare for the narrated trip is $10. Riders can also board or depart at Mark Twain Cave, Sawyers Creek and Rockleigh Mansion.

Let’s get to Hannibal’s meat and potatoes, shall we?  I’d guess that the most popular attraction in town is the Mark Twain Boyhood Home and Museum at 400 N. Main St.  Here you’ll find Mark Twain’s boyhood home, as well as Becky Thatcher’s home, Huck Finn’s home, the justice of the peace office of Twain’s father, an interpretive center, and a museum gallery.  The interpretive center has interactive exhibits that bring scenes from Twain’s most popular novels to life.  Also, the gallery features 15 original Norman Rockwell paintings.  Allow an hour to breeze through the complex – two hours to explore in depth.

No doubt the most popular Hannibal attraction with children is the Mark Twain Cave Complex, located just south of town on SR 79.  There are two cave systems here.  The Mark Twain Cave is ideal for families and casual visitors, while Cameron Cave is for serious cavers.  (We’ll stick with Mark Twain Cave here.)

Mark Twain Cave was used as a setting in five of Twain’s novels.  It has been used for cave tours since 1886!  Jesse James hid out here.

Important:  The cave temperature is a constant 52 degrees.  There are no steps, but cave tours are not accessible.

Thanks for joining me on the mighty Mississippi!  Next week, we have a real treat – a detailed program for an amazing fall foliage trip in Colorado (complete with photos you’ll love).

Welcome to Benefit Street – the most impressive neighborhood of END_OF_DOCUMENT_TOKEN_TO_BE_REPLACED