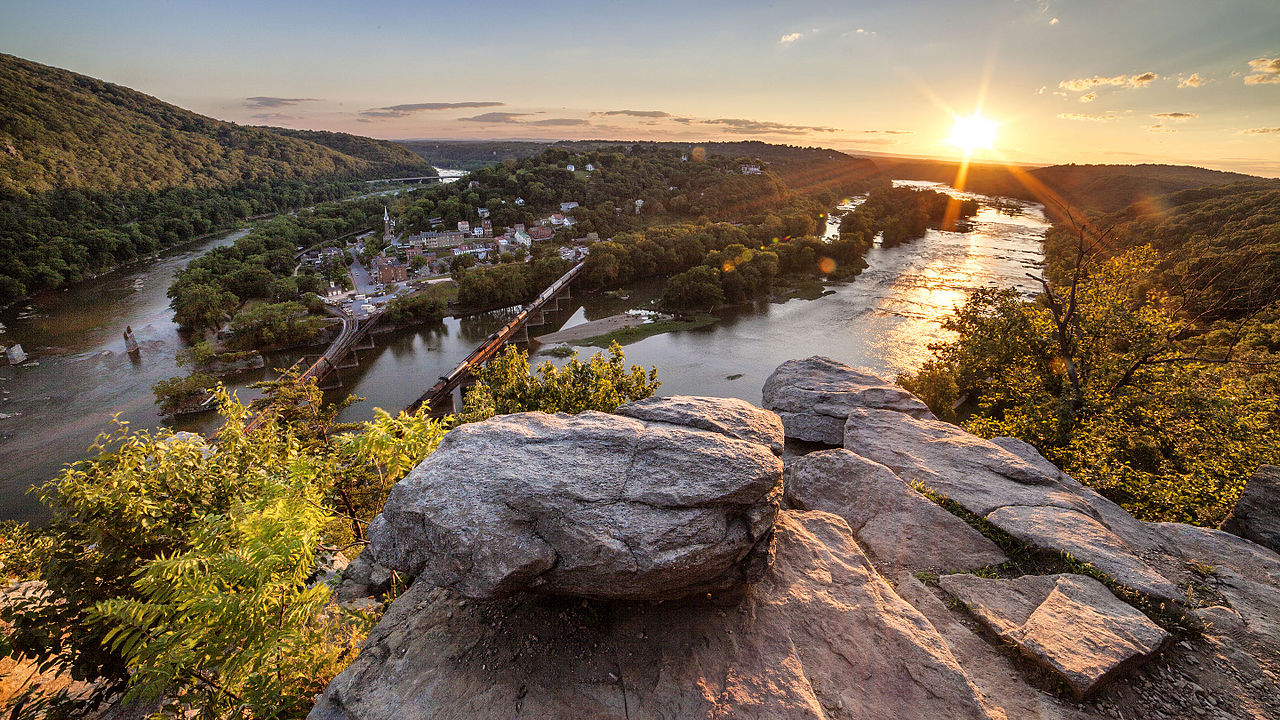 Last week I dragged my readers to dreary, downbeat Little Bighorn Battlefield, which isn’t at all worth the long distances visitors must drive to get there or the $20 per car entry fee.  (Custer isn’t the only one who lost out at Little Bighorn!)

I’ll make it up to you this week. 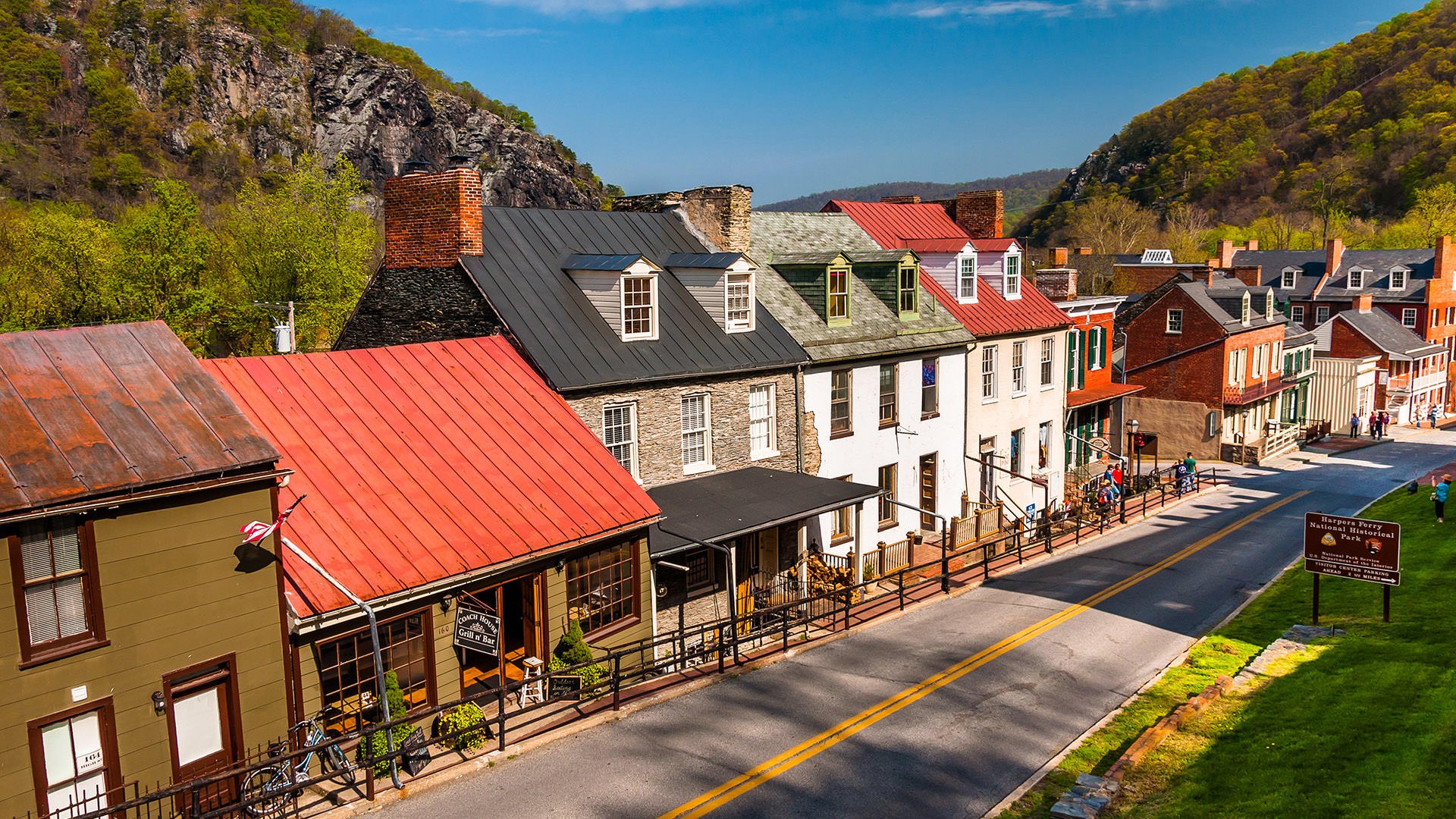 Harpers Ferry, in the far eastern corner of West Virginia, is one of the top-rated historical parks in the National Park System.  It’s scenic, educational, interactive, fun, and only a 50-mile drive from Washington, D.C.  It’s a terrific day trip or weekend destination for couples, families and friends.

I’ll begin by highlighting what’s special about Harpers Ferry.  The park is full of special things, so this section is longer than you might think.  After all, where else can you visit three U.S. states, browse fascinating museums, greet costumed interactors, have lunch in an outdoor café, visit several gift shops or a wax museum, stop for an ice cream cone, or hike through a Civil War battlefield – all in the same day?

Next, I’ll offer up some historical background.  That’s longer, too, because Harpers Ferry’s “15 minutes of Fame” wasn’t just during the Civil War.  Lastly, I’ll wrap it up with all the logistical information you’ll need for a great visit.  Oh, and let’s not forget the photos.  All photos not identified as “Photo by Tom Dell” come from the National Park Service.

The setting is superb.  You can ger a good orientation from our featured photo (top of page), which was supplied by the National Park Service.  From this vantage point, you’re looking west, with the town of Harpers Ferry on the peninsula between the Potomac River (upper right to lower left) and the Shenandoah River (upper left).

The photo was taken from Maryland Heights, looking at Lower Town, which is at the tip of West Virginia.  The ridge on the far left crosses into Virginia.  The entire area is hilly and very scenic.

Unfortunately, it’s not especially defensible in war to have your town surrounded by higher ground.  That’s a primary reason Harpers Ferry changed hands several times during the Civil War.  More about that later.

Before visiting Harpers Ferry for the first time, I recommend you spend some quality time with the park’s excellent web site – www.nps.gov/hafe.  I study a lot of National Park Service sites, and this is one of the best.  In it you’ll find a wealth of useful information presented in a user-friendly, easy-to-navigate setup.

The first two drop-downs are especially deep and useful.  Spend several minutes browsing here.  I want to call your attention to a couple of things in the Plan Your Visit menu.  First, don’t miss the very cool interactive map of Lower Town at the bottom of the Places To Go tab.  Next is the Accessibility tab.  Despite providing lots of details, the Park Service underestimates the challenge of pushing a heavy wheelchair up and down the rocky, hilly streets of Lower Town.  Call the phone number provided if in doubt.

Harper Ferry’s site also provides more than the usual listings for food and drink, because the businesses are, in some cases, right next door to park museums and displays.

Park buildings or not?

There are three types of sites in Lower Town:  Old building sites, park buildings and privately owned building.  This is illustrated by the map below.  The brown outlines are sites or ruins.  Most have interpretive plaques explaining their function and history.  The copper-colored figures represent park building that you can enter.  Most are museums or displays.

The black figures are privately owned buildings.  Many are businesses catering to park visitors – shops, cafes, snack bars – even a wax museum.  This arrangement works well for visitors.

Harpers Ferry’s Civil War battles were fought on higher ground to the north.  You can drive directly to most of these sites.  Go to the Places to Go link on the web site. The most popular of these sites is Bolivar Heights.

Harpers Ferry began as a springboard for westward expansion, thanks to a ferry established here in 1651 by Robert Harper.  His house still stands and is part of the park.

George Washington recognized the area’s potential as a manufacturing center driven by waterpower and began construction of an armory at the site.  Harpers Ferry came into prominence as a manufacturing center specializing in munitions.  In the early 1800s, factories here perfected the development of interchangeable parts.  The armory produced over ½ million muskets and rifles between 1801 and 1860.

It’s most famous event, however, occurred in 1858, when abolitionist John Brown led a raid and captured the armory, hoping to arm the slaves and lead them into a rebellion.  He was captured and hanged by a force of U.S Marines led by Lt. Col. Robert E. Lee.

When the Civil War began, Harpers Ferry found itself on the boundary between the two sides.  Both sides coveted the manufacturing facilities, especially the South, which lacked manufacturing capacity.  After two years during which the site exchanged hands at least eight times, Confederate Maj. Gen. Thomas “Stonewall” Jackson won a major victory and captured 12,5000 U.S. troops – the Union’s biggest loss during the war.

Harpers Ferry National Historic Park is about an hour’s drive from either Washington or Baltimore.  Most visitors come by way of Frederick, Md., which is reached via I-270 from Washington or I-70 from Baltimore and points farther north.  From Frederick, take US 340 21 miles to the park’s entrance gate.   That’s where you pay the $10 per vehicle entrance fee.

Park hours are 9 to 5 daily.  At Harpers Ferry, everyone parks in one big lot, then rides a free shuttle into the heart of Lower Town.  The parking lot also contains the park’s visitor center, which doubles as the shuttle station.  Shuttles run frequently.

Thanks for joining Road Trips with Tom  this week.  We’ll  be back June 11 with a visit to Red Rock Canyon National Conservation Area just outside Las Vegas.  Bring your Elvis suit!

This week’s road trip takes us to Fort Scott END_OF_DOCUMENT_TOKEN_TO_BE_REPLACED

You can run out of adjectives really fast when describing END_OF_DOCUMENT_TOKEN_TO_BE_REPLACED