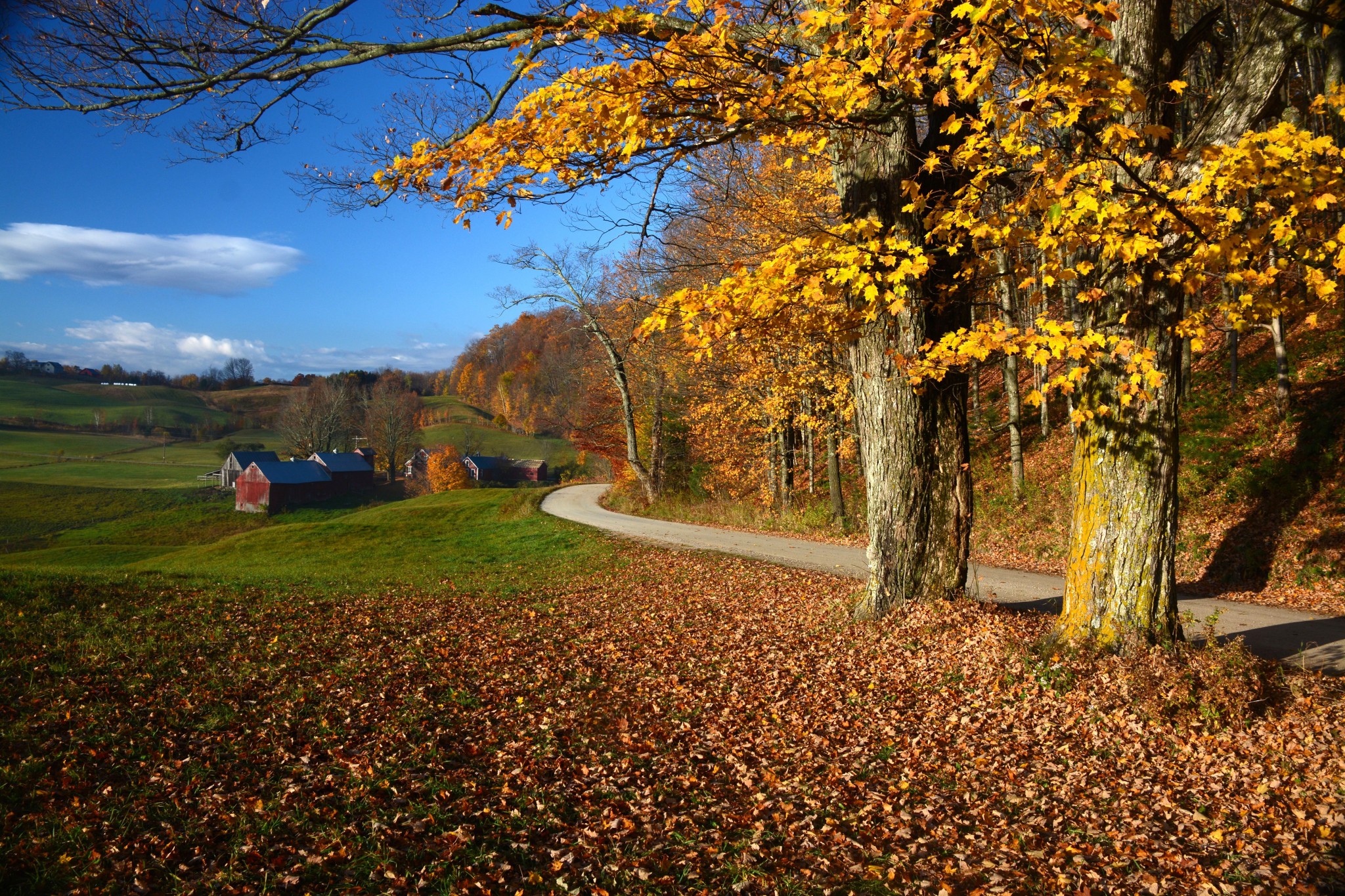 I’m a lover of fall foliage.  I take at least one foliage road trip every year – sometimes two.  One of nature’s greatest spectacles is the annual color change in our deciduous forests.  In a relatively short period of time, bazillions of trees change from green to every possible shade of yellow, gold, orange and red, then lose their leaves for the winter.

The challenge in selecting a fall foliage road trip destination is timing.  The color change varies every year in the timing of peak foliage, as well as the quality of the display.  This can be frustrating if you’re flying to another region, because you have to commit to travel dates (and scheduled vacation time) before anyone can predict with any accuracy when and where the best displays will occur.  I traveled to New England in 2012 and 2013 to catch America’s most spectacular fall foliage display.  In both years, I arrived about October 10.  In 2012, I was early; the peak was at least a week or two away.  In 2013, on the other hand, I was late; the color was fading.

Latitude and elevation are important variables.  Trees change color sooner the farther north you travel and the higher you climb.  The timing can also change from one mountainside or valley to the next.

The good news about planning a fall foliage road trip is that there are some terrific resources on the internet.  If you Google “Vermont fall foliage 2015” in a few weeks, you’ll have more details than you’ll ever need.  In New England, where foliage season is a big business, the states post color coded maps showing which areas are expected to peak at different times.  The foliage reports will start appearing in early September.

I found a couple general models that are available now:

You may have to copy these URLs and paste them into your browser.

You can find good foliage displays in at least 30 of the 50 states.  I’ll leave the detailed research up to you.  In this post, I will offer three of the best for those of you who want to see foliage but don’t want to burn up your eyesight doing Google searches.  The three are Colorado, which has the West’s best fall foliage; northern New England, which has the best foliage displays anywhere; and California, which for most of my readers is closest to home.

Get out your map of Colorado.  The Rockies statewide are ablaze in late September, but I have two special places to suggest:  The Million Dollar Highway (US 550) in the San Juan Mountains between Ouray and Durango; and Kebler Pass (unpaved but no problem in a car) west of Crested Butte.  There are no guarantees in life, but if you’re in one of these places on or about September 25, you’re almost certain to see millions of aspens fluttering their golden leaves in the mountain breeze.  Of course, a road trip is more than looking at trees.  You’ll probably want to stay where there are good accommodations, good places to eat, and good shopping.  I would recommend Durango, Ouray and Telluride in the San Juan Mountains, and Crested Butte to the northeast.  The nearest major airport is Denver, but it’s a 4-5 hour drive.  From California, you can drive it easily in two days.  I usually stay in Ouray, a picturesque old mining town.  While in southwest Colorado, don’t miss a chance to ride the narrow-gauge train from Durango to Silverton.

The foliage displays in Vermont and New Hampshire are more fickle than those here in the West.  Timing it right is a crapshoot, because accommodations are scarce during foliage season.  In fact, you should book them now.  Three good bases for touring are Burlington and Brattleboro, Vermont, and North Conway, New Hampshire.  If you track the states’ foliage websites, you’ll be able to select the ideal routes.  This October, I’ll be there, and I’m staying in Lebanon, N.H., near the junction of Interstates 89

and 91.  From there, I can hit most of Vermont or New Hampshire in less than two hours.  Remember, these are little states, so you can drive across Vermont in less time than my typical commute during my working days at Hyundai.  I recommend you fly into Bradley Airport (Hartford-Springfield) in Connecticut.  It’s right on I-91, which will take you to Vermont in just over an hour.  Please also keep in mind, that the portion of Quebec just over the border has some of Canada’s best fall foliage.  A good touring base is Magog.  Bring your passport and French phrase book.

The Golden State isn’t known for fall foliage, but there’s one region that lights up with golden aspens in October.  That’s the Eastern Sierra, along US 395 north of Bishop.  The ideal touring base is Mammoth Lakes, which is about a 6-hour drive from LA.  Be there on or about October 10.  The best displays will be west of US 395 as you mosey north from Mammoth to Bridgeport.  While there, don’t miss a visit to Bodie State Historic Park.  Bodie is the country’s best ghost town.  I may be making this trip in October, then heading east to Utah’s Wasatch Mountains.

A few other foliage destinations that come to mind are southwest Utah (Mt. Nebo and Brian Head), Michigan’s U.P. (Upper Peninsula) along the Lake Superior shore; New York’s Adirondacks around Lake Placid; the Blue Ridge Parkway near Asheville, N.C.; and the Arkansas Ozarks.  Tom’s favorite that not many people know about is the east side of Glacier National Park along US 89 and SR 49 between Babb and East Glacier Park.  You can even find nice foliage in Iowa, as pictured below.

This week’s road trip takes us to Fort Scott END_OF_DOCUMENT_TOKEN_TO_BE_REPLACED

You can run out of adjectives really fast when describing END_OF_DOCUMENT_TOKEN_TO_BE_REPLACED

Welcome to Benefit Street – the most impressive neighborhood of END_OF_DOCUMENT_TOKEN_TO_BE_REPLACED