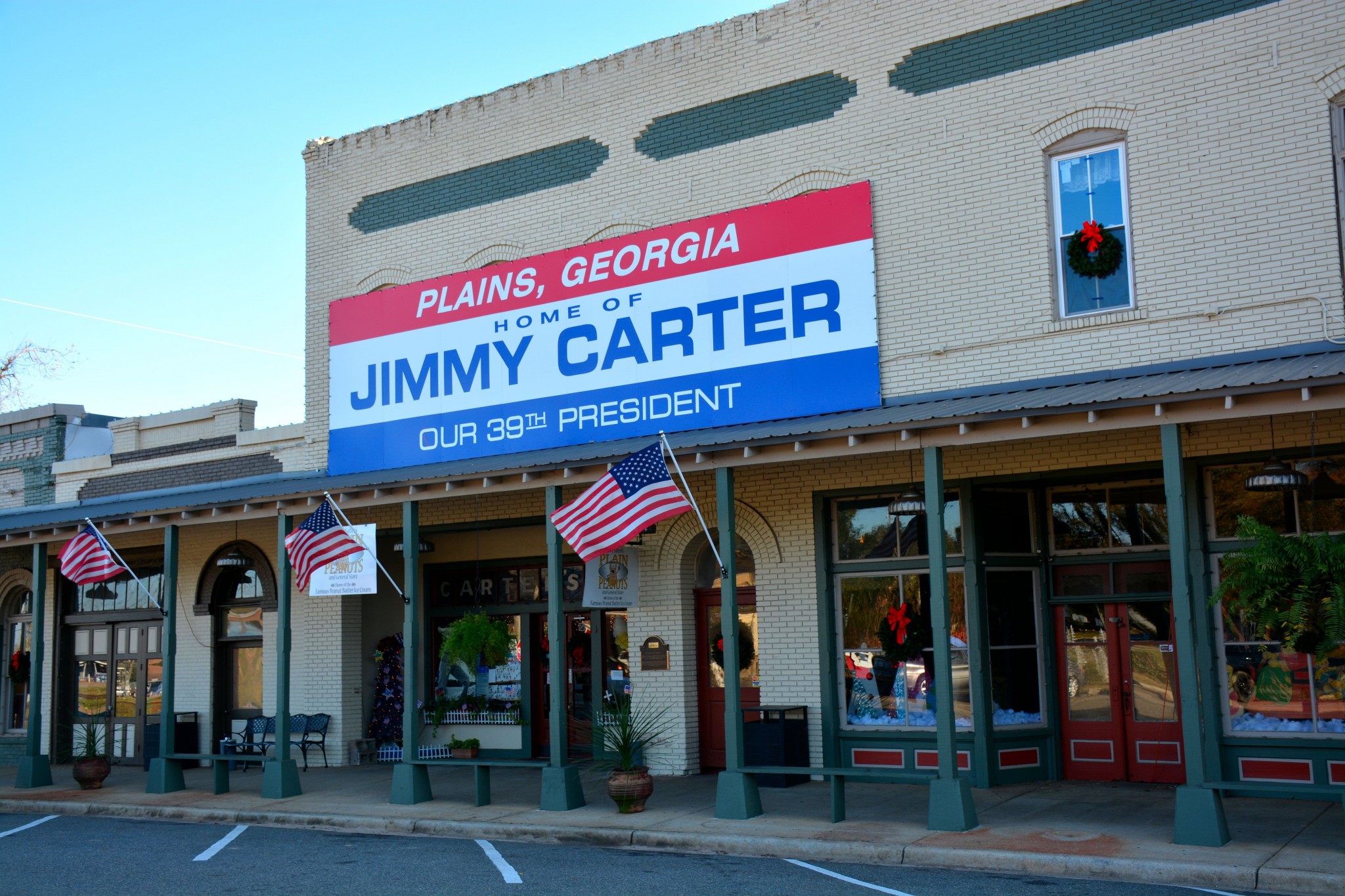 Plains is like a hundred other small towns in Georgia – a block-long business district, a set of railroad tracks, a two-lane main highway, no stoplights, a couple of Baptist churches, and a population that doesn’t hit 1,000.  All in all, it’s another blink-and-you’ll-miss-it kind of place.

But Plains is different. Something remarkable happened here.

Picture two brothers growing up on a farm.  One became  a potbellied, beer-swilling good ol’ boy who ran a gas station.  The other became President of the United States.

Jimmy Carter was President from 1976 to 1980.  Few people would argue that he was a great President.  But since leaving the White House, he has cemented his  reputation as a man of great faith, humility and dedication to peace.  In fact, he was awarded the Nobel Peace Prize in 2002.  Thus, it was a sad occasion last August when the former President, now 91, announced that cancer had spread to his brain.

I was driving from the Florida gulf coast to Atlanta earlier this month when I heard on the car radio that the cancer treatment had been successful, and Jimmy Carter had been pronounced cancer-free.  After checking my map, I decided to adjust my route and visit Plains.

Several sites in Plains are part of Jimmy Carter National Historic Site, administered by the National Park Service.  They include the Carter family farm, Mr. Carter’s campaign headquarters and the Plains historic district.  First stop should be the visitor center, located at Plains High School and just down the street from the church where President Carter still teaches Sunday school.  Signs along US 280 (the main drag) provide directions.

My favorite was the family farm, which has been restored to what it looked like in 1938, just before electricity was installed.  On a self-guided walk around the farm, you can get an audio description of each site using your cell phone; Jimmy Carter did the narration, which makes the descriptions more vivid and poignant.

If you’d like to visit Plains, check the hours of the various sites by accessing the park’s web site:  www.nps.gov/jica.  There’s also a link showing Mr. Carter’s Sunday School schedule.  A limited number of visitors are welcome to join him.  There is no fee for any of the units in the park.  Accommodations can be found in Americus – 10 miles east of Plains.  Annual visitation for Jimmy Carter National Historic Site is about 60,000.

Bottom line:  Jimmy Carter National Historic Site is an interesting stop if you’re in the area. It can be visited as a day or weekend trip from Atlanta.  But  it’s not worth a special trip unless you live in or are visiting Georgia.  I enjoyed my visit, but I wouldn’t have made the detour if I didn’t have a constant need for material for this blog.

This week’s road trip takes us to Fort Scott END_OF_DOCUMENT_TOKEN_TO_BE_REPLACED

You can run out of adjectives really fast when describing END_OF_DOCUMENT_TOKEN_TO_BE_REPLACED