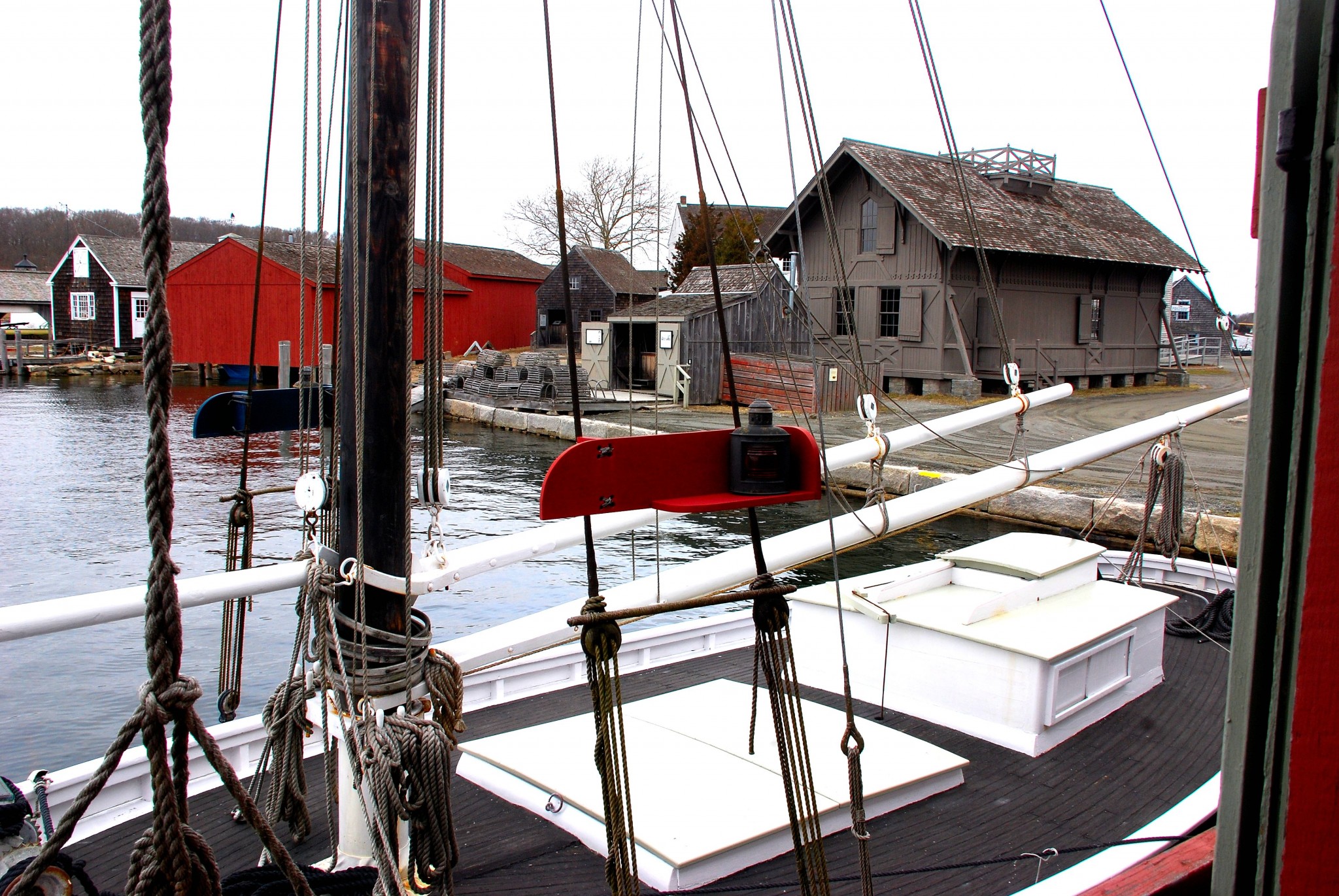 Mystic Seaport in Connecticut is the world’s largest maritime museum.  It rivals Virginia’s Colonial Williamsburg as America’s finest historical restoration.  It’s an outstanding road trip destination – one worthy of a special trip from anywhere in North America.  If Mystic Seaport isn’t on your road trip bucket list, it should be.

I’ve been there twice – once back in the 1980s and once in winter 2010.  That’s when I became the answer to the trivia question:  “What Californian is crazy enough to visit New England in the middle of winter?”  There were more employees than visitors there the day I visited, as you can see in the accompanying photos.  The temperature was in the mid-teens, and there was a stiff breeze blowing up the Mystic River.  The seaport is open all year, but, frankly, there’s a lot more to see between May and October.

I’ll start out with an overview of the museum, followed by directions and details on hours, prices and so forth.

Mystic Seaport recreates a 19th-century seafaring village.  It has 60 buildings on a 19-acre site along the Mystic River just upstream from the Atlantic Ocean.  The buildings are originals – not reproductions.  Many were moved here from other New England locations.  Most of the buildings house the trades and crafts that would have been present in 1870s.  They are staffed by costumed craftspeople, historians and storytellers who interact with visitors.  Other buildings house special exhibits, including a children’s museum.  Many of the buildings are closed in the winter.  The museum begins fully functioning in May.

Let’s not forget the ships.  The seaport’s collection numbers 500 ships – four of which are national historic landmarks.  The star is the Charles W. Morgan, the last wooden whaling ship still afloat.  It was built in 1841 and restored to its original appearance.   It was still in the museum’s shipyard undergoing restoration when I visited.

Many of the ships can be boarded and explored.  Kids especially enjoy this.  Some are also available for excursions on the Mystic River for a few dollars.

Mystic Seaport is open year-round.  Here are the hours:

Mystic Seaport is in southeastern Connecticut, a few miles west of the Rhode Island border.  It’s just off I-95 – the primary north-south interstate highway on the east coast connecting Maine with Florida.  To get to the seaport, take Exit 90, then drive south one mile.  On busy days, get there early for a decent parking spot.

You’ll find plenty of accommodations and other services nearby.  There’s food service inside the seaport all year.  If you’re flying, the most convenient airports are Bradley Airport near Hartford and Green Airport near Providence.  It’s easy to combine a visit to Mystic Seaport with a road trip to Newport, Cape Cod or Boston.

Mystic Seaport draws 250,000 people per year, so it can get crowded in summer.  My advice would be to visit on a weekday in May, September or October, when everything is open but crowds are relatively sparse.  To double-check hours and prices, and to get exhaustive detail on the exhibits, go to www.mysticseaport.org .  You can buy your tickets online and avoid having to wait in line when you arrive.

This week’s road trip takes us to Fort Scott END_OF_DOCUMENT_TOKEN_TO_BE_REPLACED

You can run out of adjectives really fast when describing END_OF_DOCUMENT_TOKEN_TO_BE_REPLACED