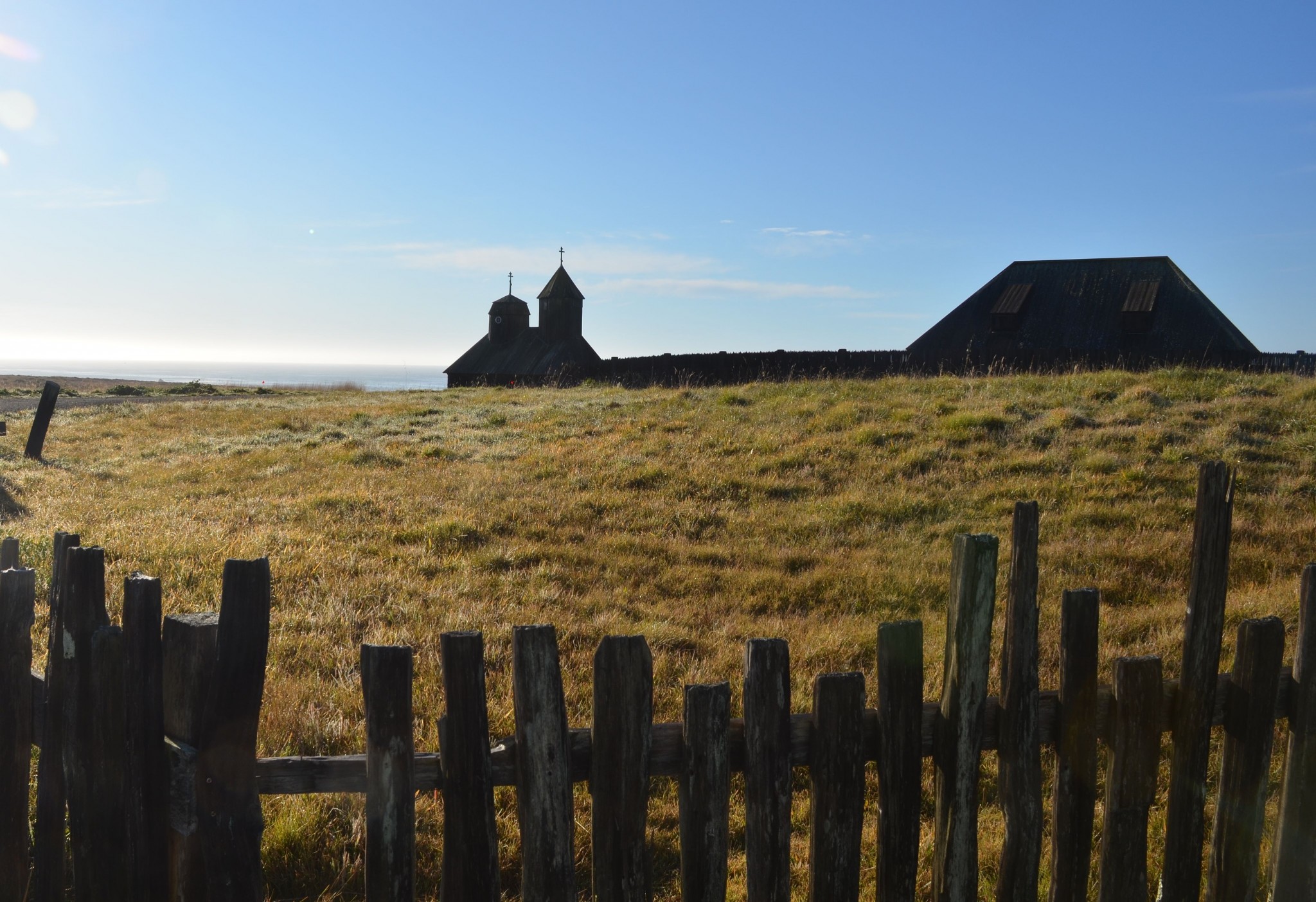 This week, our cyber road trip takes us about two hours north of San Francisco to Fort Ross State Historic Park.  Here, Tsarist Russia established a settlement that operated from 1812 to 1841.  Several of the buildings have been restored or rebuilt, and you can enter them, stroll the grounds and try to envision what life was like in Russia’s most far-flung outpost.

If you’re driving up the coast on Highway 1, you can’t miss Fort Ross.  The entrance is right on the highway, on a terrace high above the ocean.  Your first sight is the handsome Russian Orthodox chapel, made of weathered redwood.  The original was destroyed in the 1906 earthquake and later rebuilt.

Although Fort Ross isn’t worthy of a special road trip, you should definitely stop here for an hour or two if you’re in the area. It’s a great stop on a road trip to Redwood National Park or the Oregon coast.  If you live in the Bay Area, it’s a nice Sunday drive.  You’ll find it 10 miles north of Jenner, which overlooks the mouth of the aptly named Russian River.  The photo that appears just above the Welcome link on our Road Trips With Tom home page was taken just a few miles south of Fort Ross.

The coast between Point Reyes and Mendocino is one of my favorite parts of California.  Highway 1 climbs and dips past grassy hills, thick forests, weathered wooden fences, dairy farms and soul-stirring views of the rugged seascape – all of which, combined with frequent fog, mist, storms and occasional brilliant sunshine, give the land a moody, almost surreal character that’s unlike anywhere else I know. You almost expect to hear a voice in the fog, saying, “Hurry, Watson, the game is afoot.”

When Fort Ross was established, California was a Spanish outpost.  A decade later, when Mexico won its independence from Spain, California changed hands, too.  Neither Spain nor Mexico showed interest in the land north of the Golden Gate, so the Russians were unchallenged.

Fort Ross was actually a commercial enterprise founded, built and operated by the Russian-American Company, which was a de facto arm of the Russian government.  Russia’s first colonies in North America were in Alaska.  Vestiges of these colonies can be seen in Kodiak and Sitka.  (I’ll be visiting Sitka in May and will post an article and photos afterward.)

The primary purpose of Fort Ross was to provision Russia’s Alaska colonies.  That included hunting sea mammals (which provided valuable pelts, as well as meat), farming and stock-raising.  Using local timber, the colony built furniture and tools; it even launched a shipbuilding enterprise. The Russians brought with them about 60 Alaskan Inuits, who were highly skilled sea hunters – so skilled, in fact, that they pretty much wiped out the local population of sea otters.  That, along with the colony’s failure to meet expectations in foodstuff production, spelled the end of Russia’s California outpost.  In 1841 it was sold to John Sutter, the Swiss-born immigrant whose mill east of Sacramento was the site of the discovery that touched off California’s great gold rush.

From now through March, Fort Ross State Historic Park is open Friday through Monday from 10 to 4:30.  It will have expanded hours beginning April 1.  Check the park’s web site for details:  www.parks.ca.gov/?page_id=449.  The entrance fee is $8.00 per vehicle ($7.00 for seniors).  The campground is closed for the season, but you can camp at nearby Salt Point State Park.  Accommodations are in Jenner and Guerneville.  The nearest major hotels are in Santa Rosa.

This week’s road trip takes us to Fort Scott END_OF_DOCUMENT_TOKEN_TO_BE_REPLACED

You can run out of adjectives really fast when describing END_OF_DOCUMENT_TOKEN_TO_BE_REPLACED