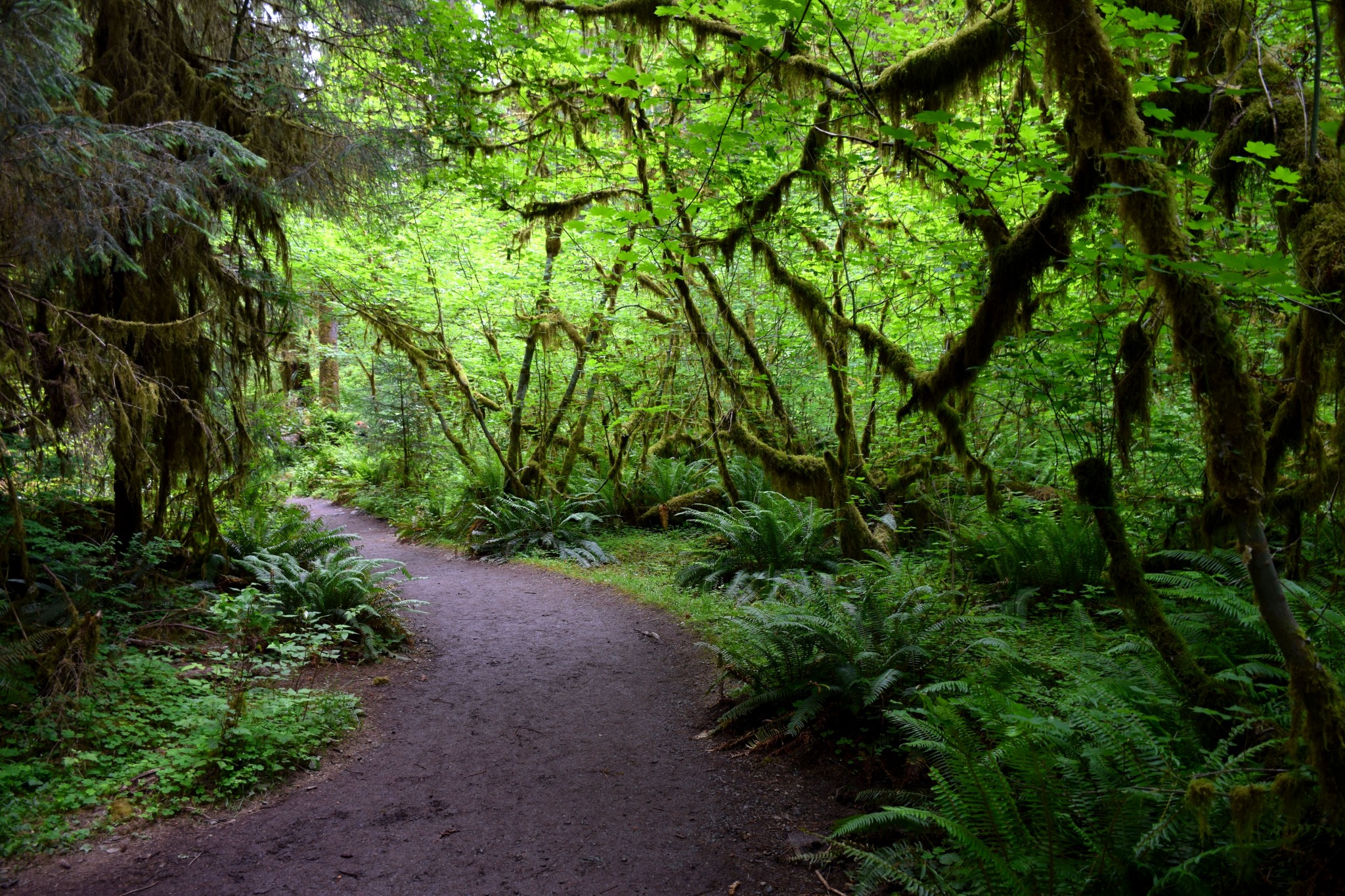 This week, after a side trip to New Jersey, Road Trips with Tom heads back to the Pacific Northwest.  We’ll be visiting the west side of Washington’s Olympic National Park – specifically, the Hoh Rainforest and nearby Rialto Beach.

Olympic is one of the nation’s most popular parks.  More than 3.2 million people visited it in 2015, making it the nation’s seventh most-visited park and the most popular national park in the Pacific Northwest.  Olympic National Park gets crowded in summer, as you might expect.  As a result, you’ll need a mob avoidance strategy if you want to come then.  We’ll provide some guidance near the end of this article.

It’s a big park, and no roads cross its mountainous, glacier-laden interior.  US 101 runs along the edges, and short side roads give you access to the park’s good stuff.  In this post, we’ll focus on the west side, with the old lumbering town of Forks as our hub.  As you circle the park, you’ll mostly be outside its boundaries and will see occasional clear cuts, which look like the earth just got a really bad haircut.

Olympic National Park is a premier road trip destination, as opposed to a place where you do a quick drive-by on your way to somewhere else.  If you’re flying, either Seattle or Portland will work.  I flew into Portland, because I also wanted to visit the Columbia Gorge (see our June 26 post).

An explosion of green

Welcome to the Emerald City!

There’s a reason for all that green . . . and that reason is reflected in its name.  This is one of the world’s most extensive temperature rainforests.  It’s probably the single wettest place you can drive to!  It averages a whopping 140 to 170 inches of rain per year.  That’s 12 to 14 feet!

Why come?  Well, it’s flat out stunningly gorgeous, as you can see in the accompanying photos.  Temperatures are moderate year-round, and you don’t have to worry about a lot of crawling or flying things that will bite you.  So grab your umbrella and raincoat, and enjoy!

The road to the Hoh Rainforest leaves US 101 about 14 miles south of Forks, or about 20 miles north of Kalaloch.  It’s 18 miles of fairly slow driving to get there from 101.  Twelve miles in, you enter Olympic National Park and pay your entry fee ($25 for cars, $15 for motorcycles).  The visitor center, parking area and trailhead are another six miles ahead.  The visitor center is officially open 9-5 in summer, but it closed at 4 the day I was there (June 20).

There are two easy trails that will get you into the forest.  The most popular – and the one I took – is the 0.8-mile Hall of Mosses Trail.  The Spruce Trail is 1.2 miles long.  Both are loops.  For serious hikers, the Hoh River Trail leads deep into the heart of the park.  You’ll need a wilderness permit for an overnight hike.  Whatever trail you take, keep an eye out for Roosevelt elk, which hang out in the rainforest.

Near the visitor center is the 88-site Hoh Campground ($20 per night), which has flush toilets but no showers or hookups.  The sanitary disposal station costs an additional $10 per use.  There are no reservations; sites are first-come, first served.

Our second stop on the west side of Olympic National Park is Rialto Beach.  To get there, go west on SR 110 from Forks.  The road divides after a few miles, with the left fork going to the Quillayute Indian village of La Push.  Bear right for Mora and Rialto Beach.  You’ll soon re-enter the park and arrive at the Mora Ranger Station and Campground.  Continue another mile or so to the road’s end at Rialto Beach.

The theme of Rialto Beach is driftwood – more than you’ve ever seen – huge piles of it.  This is proof of the ocean’s power here.  You’ll find restrooms and a picnic area, but you’ll have to make your way through the driftwood maze to get to the beach.  You’ll see offshore sea stacks in both directions.  This isn’t as stunning a beach as Ruby Beach near Kalaloch, but it’s a whole lot less crowded and still very scenic.

The ocean was relatively benign when I was there in June.  As a result, I’ve included a couple of photos from a prior trip when the wind was howling and the surf was angry. That’s more typical of the Olympic Peninsula’s west-facing beaches.

From here, experienced hikers can travel for miles up the beach.  Tide tables are essential, as is a wilderness permit, which you can get at the Mora Ranger Station.

The 92-unit Mora Campground has similar facilities to the Hoh Campground.

The Hoh Rainforest is a great place for quiet reflection, but good luck with that in summer.  The trails have a steady stream of visitors throughout the day.  Parking can be a problem from late morning to mid-afternoon.  You should plan to arrive in early morning or after 4 p.m.  To score a campsite, arrive by 2 on a weekday or noon Friday.

Rialto Beach is a bit less crowded, although you certainly won’t be alone.  The same advice for Hoh Campground applies to Mora Campground.  By the way, internet reviews rave about what great campgrounds these are.

What about hotel/motel accommodations?  The theme is “book early and bring money.”  There’s the Kalaloch Lodge, along with a few motels in Forks.  Expect all of these to be booked weeks in advance.  You can probably get a room in Port Angeles (expensive, for sure), two hours north of the Hoh Rainforest or Rialto Beach.  I stayed there on last month’s trip and paid over $100 for a real dump.

The main Olympic National Park website is www.nps.gov/olym.  The schedule of ranger-led programs is in the park newspaper, The Bugler.  Access it at www.nps.gov/olym/learn/news/newspaper.htm

NEXT WEEK:  We’ll visit two lesser-known Los Angeles museums that are worthwhile . . . and FREE! Join us on July 17.

Thanks for visiting Road Trips with Tom!

This week’s road trip takes us to Fort Scott END_OF_DOCUMENT_TOKEN_TO_BE_REPLACED

You can run out of adjectives really fast when describing END_OF_DOCUMENT_TOKEN_TO_BE_REPLACED