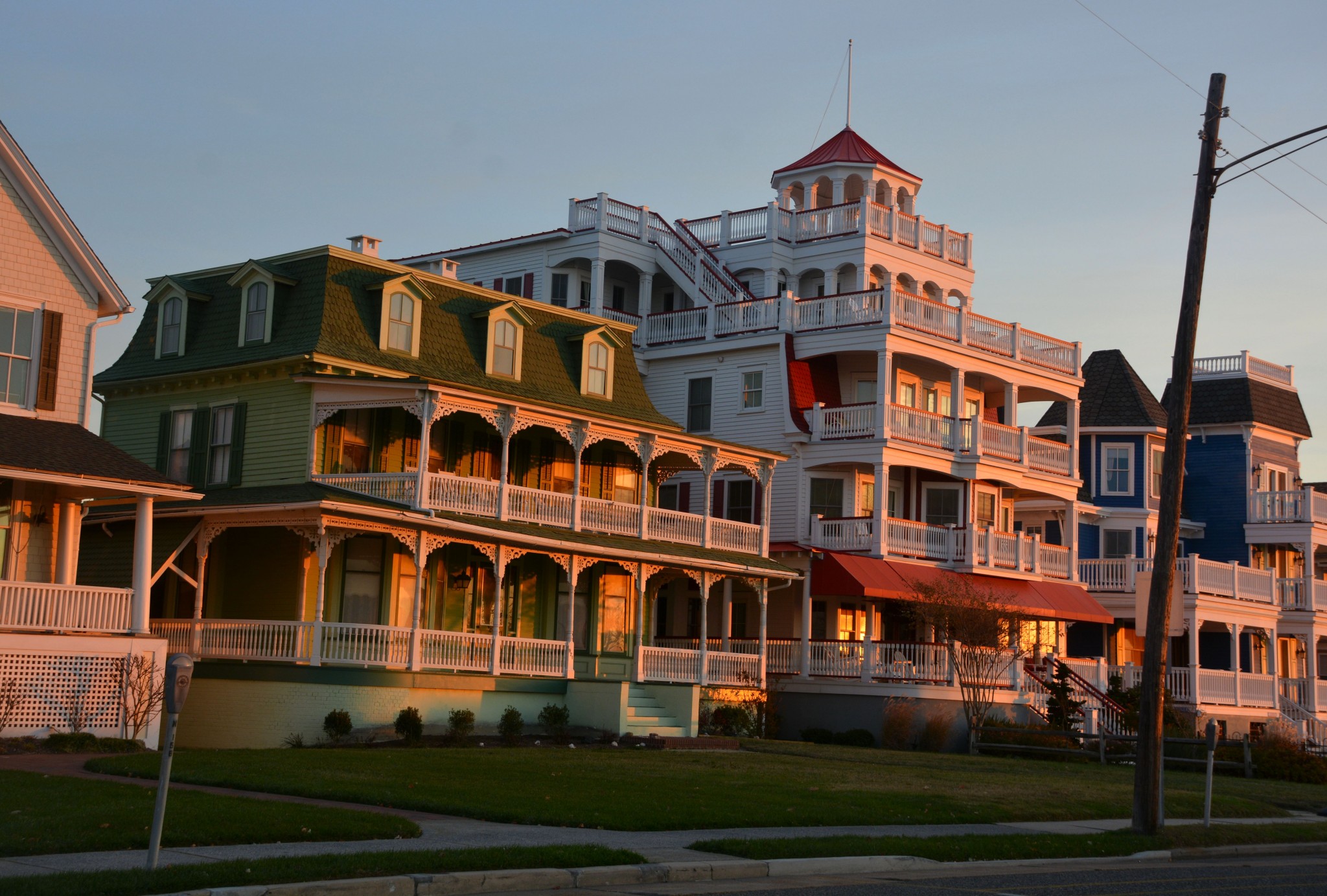 This week, Road Trips with Tom heads to the southern tip of New Jersey and the Victorian seaside resort town of Cape May.  I like Cape May.  It’s my favorite town in New Jersey.

People who live in the Northeast have a somewhat different relationship with the Atlantic coastline than we in California have with the Pacific coast.  For one thing, easterners call it the shore, while we call ours the beach or the coast. Second, while we, more often than not, take day trips to the beach, those on the Atlantic coast head for the shore and stay in one place for several days.

My wife is a Jersey girl who grew up in the shadow of Manhattan’s skyscrapers across the Hudson.  Most summers, her father and his brother rented a house along the Jersey Shore for a week or longer.  This pattern still occurs every summer up and down the New Jersey coast.  Many of the beach towns have boardwalks and amusement parks.  Then there’s Atlantic City, which occupies its own niche.

Obviously, there are exceptions to this pattern.  One that comes to mind is San Diego, which teems with Arizonans in the summer.

From a road trip perspective, then, Cape May is a destination – not a stopover on the way somewhere else.  People come here and stay several days, then return home.

It’s filled this purpose for a long time.  Cape May is the nation’s oldest beach resort, having hosted vacationers from Philadelphia since the 1750s.  Five U.S. Presidents visited Cape May during the 1800s, and Abraham Lincoln was here in 1849, before he became President.  Much more recently, the Travel Channel named Cape May one of America’s top 10 beaches.

One of the city’s greatest attractions (in addition to its beaches) is its architecture.  According to National Park Service architectural historian Carolyn Pitts, “Cape May has one of the largest collections of late 19th-century frame buildings left in the United States… that give it a homogeneous architectural character, a kind of textbook of vernacular American building.”*  In fact, Cape May has the second largest collection of Victorian buildings in the United States, trailing only San Francisco.  The entire city has been designated a National Historic Landmark.  Most of the Victorians date from the mid-19th century to the early 20th century.

Because of the spectacular Victoria architecture and lack of the tacky atmosphere you’ll find in other Jersey Shore locations, Cape May is considered one of New Jersey’s classiest summer destinations.  Of course, that’s reflected in lodging and other costs.

The city’s population is only about 3,600, but on a typical summer day there are many times that many people in town.  The city’s economy is almost completely dedicated to tourism.

What to see and do

Let’s begin our visit with the beaches, shall we?  That’s the biggest attraction for most people.  Unlike other Jersey Shore towns, Cape May lacks the carnival atmosphere you’ll find in Ocean City or Seaside Heights.  The beaches are clean and attractive, with lifeguards on duty throughout the summer.  Because it’s at the southern tip of the state, this is the only place in New Jersey where you can watch a sunset from an Atlantic beach.

Unlike California’s state and city beaches, which soak visitors on parking, Cape May requires each beachgoer to purchase a beach tag.  The cost is $28 for the season, $18 for one week, $12 for three days, or $6 for one day.  This doesn’t include parking, which is typically in metered spaces on nearby streets.  You can buy beach tags at any beach entrance.  As is typical on the East Coast, the surf lacks size, form and definition, making it good for play and relatively safe for kids, but not so hot for body surfing or boogie boarding.  Thanks to the Gulfstream, water temperatures are mild throughout the summer.

Summer temperatures are relatively mild, thanks to the proximity of the ocean.  It rains an average of nine days per month during summer.

Cape May wants to be more than just a pretty face, and the city does a good job on the cultural front.  There’s a whole slew of cultural offerings, including festivals, concerts and theater performances.  Shopping is good, too, with a downtown pedestrian-only mall full of interesting shops and galleries.

If you’re planning a visit, I recommend you spend some time at www.capemay.com – a very useful web site with all the visitor information you might want, including schedules for cultural activities.

A good way to start a visit to Cape May is on a trolley tour.  There are several tours offered.  For details, Google “Cape May trolley tour,” and use that link.  Sorry, I couldn’t get the link to the trolley tour site to go “live” in the blog.

You should make room reservations several weeks in advance.  I looked on Expedia for rooms in mid-August (six weeks from when this was written).  About half the listed properties were already sold out.  If you can’t find a room in Cape May for the dates you want, an alternative is Wildwood, just a few miles up the shore.  That’s what I did on the trip when these photos were taken.  It was in November 2013, and I was quite the oddity:  “Why would someone from California possibly come here in the off-season?”  The answer, of course, is “Why not?”

That’s not all.  A ferry connects Cape May with Lewes, Delaware, across Delaware Bay.  The crossing takes 85 minutes and leaves from a terminal a few miles west of town (follow the signs).  The cost varies with season and type of vehicle.  Reservations are strongly recommended.  For schedules and fares, go to www.capemaylewesferry.com

This week’s road trip takes us to Fort Scott END_OF_DOCUMENT_TOKEN_TO_BE_REPLACED

You can run out of adjectives really fast when describing END_OF_DOCUMENT_TOKEN_TO_BE_REPLACED