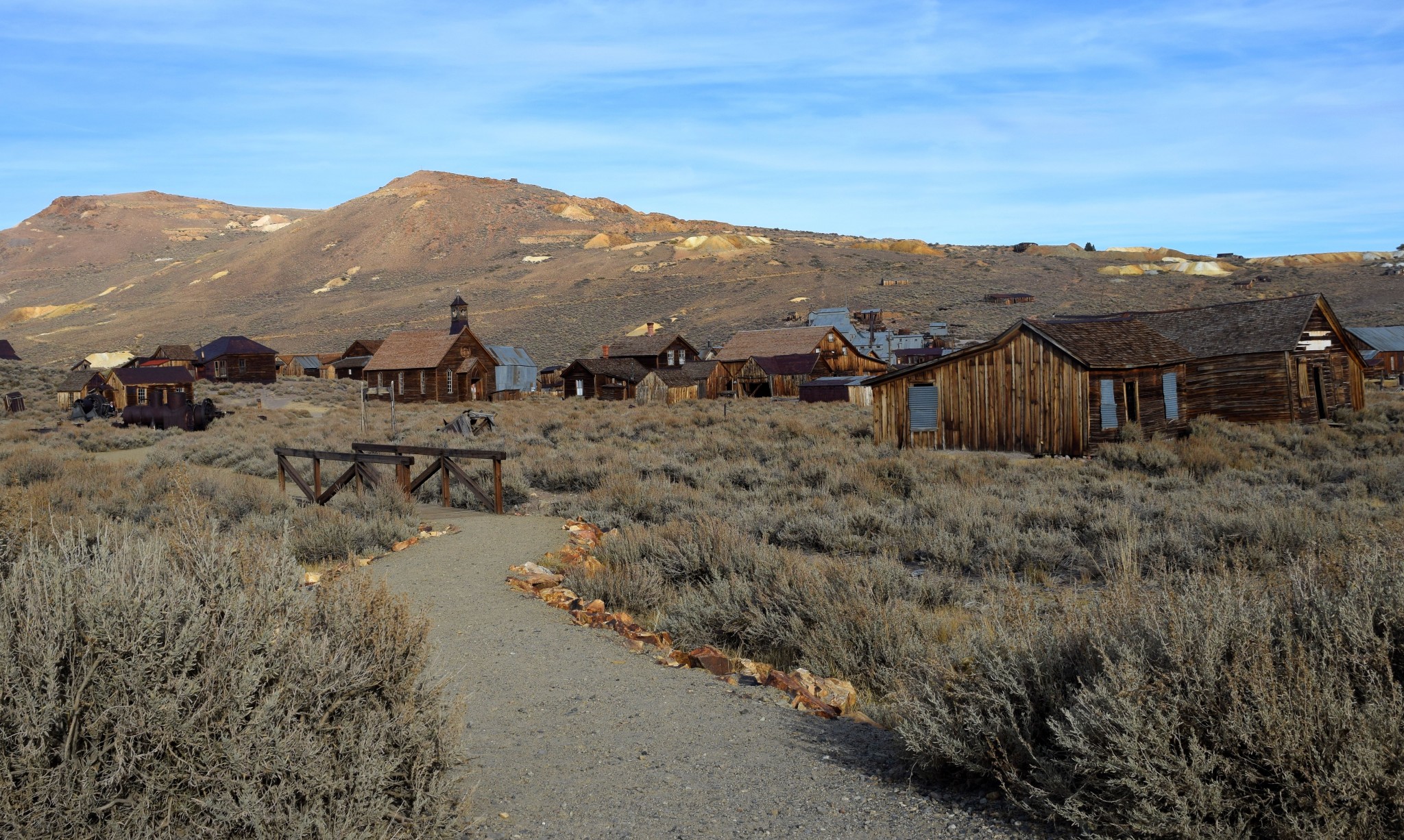 After bouncing down a dirt road so washboarded it seemingly can shake your fillings loose, you come upon a large collection of wooden buildings strewn across sage-covered hills.  You’re miles from anywhere.  The wind is constant.  At an elevation of  8,500 feet, it has a bite to it on all but the warmest summer days.

It once had a population of 8,500 people and featured stores, saloons, dance halls, churches and even a Chinatown.   Even though what you see is only about 10 percent of what once existed here, it’s still America’s best ghost town and one worthy of a visit.

But be warned.  If you’re looking for souvenir shops, B&Bs and mock gunfights in the streets, Bodie isn’t for you.  Go instead to Virginia City, Nevada.  There are no commercial facilities in Bodie – just a restroom and a drinking fountain.  That’s it.

Like a lot of mining towns in the West, Bodie was like a fireworks display that shoots up into the sky, explodes into brilliance, then falls and fades into the night.  Gold was first discovered here in 1859, but there were other, richer mining camp in the area, including Virginia City with its fabulous Comstock silver mines.  In the mid-1870s, however, a major strike in Bodie launched the boom.  By 1879 there were some 2,000 buildings here.  But the boom didn’t last.  By1881 the town began to decline.  A devastating fire in 1892 and another in the 1930s destroyed all but the 10 percent you see today.  Bodie had become a ghost town.  What saved Bodie from becoming a pile of rubble like many other ghost towns occurred when the State of California made it a state historic park and pledged to manage it in a state of “arrested decay,” meaning buildings would not be restored but they would be protected from further decay and vandalism.

You’re free to wander Bodie’s streets and peer into the buildings, many of which still have their original furnishings.  You should allow at least two hours.  Admission is $5 per car.  Keep in mind that the air is thin at 8,500 feet.  There are a few areas roped off because of safety hazards.  One, the stamp mill, can be visited on guided tours during summer for an additional $6 per person.  You’ll find a small museum and visitor center.  For details, including a map, go to www.parks.ca.gov/bodie  and click on “brochures.”

Visiting Bodie takes some work and some planning.  You don’t just drop by.  The nearest town with a full range of accommodations is Mammoth Lakes, about 50 miles away.  Limited services can be found in Bridgeport and Lee Vining, both about 25 miles away.  The nearest airport is in Reno, Nevada – a two-hour drive.

To get to Bodie, you take US 395 to the junction with California SR 270, then drive east for 13 miles.  The last three miles are a jarring, unpaved road that’s okay for passenger cars driven carefully in good weather.  Bodie is about 8 hours from Los Angeles, Orange County or Las Vegas, and 6-7 hours from the San Francisco Bay area.  Coming from points east, the nearest interstate highway is I-80, which meets US 395 in Reno.

Bodie is theoretically open all year.  But unless you have a special snow vehicle, you’ll have to visit between May and late October.  Hours are usually 8-6.  To get the best afternoon light for photography, you’ll want to visit in late September or October.

Most people will enjoy Bodie.  I was surprised to find 60 or 70 other people there on a weekday in late October.  It’s a long drive from major cities, but it can easily be combined with a visit to Yosemite National Park or Lake Tahoe.

This week’s road trip takes us to Fort Scott END_OF_DOCUMENT_TOKEN_TO_BE_REPLACED

You can run out of adjectives really fast when describing END_OF_DOCUMENT_TOKEN_TO_BE_REPLACED