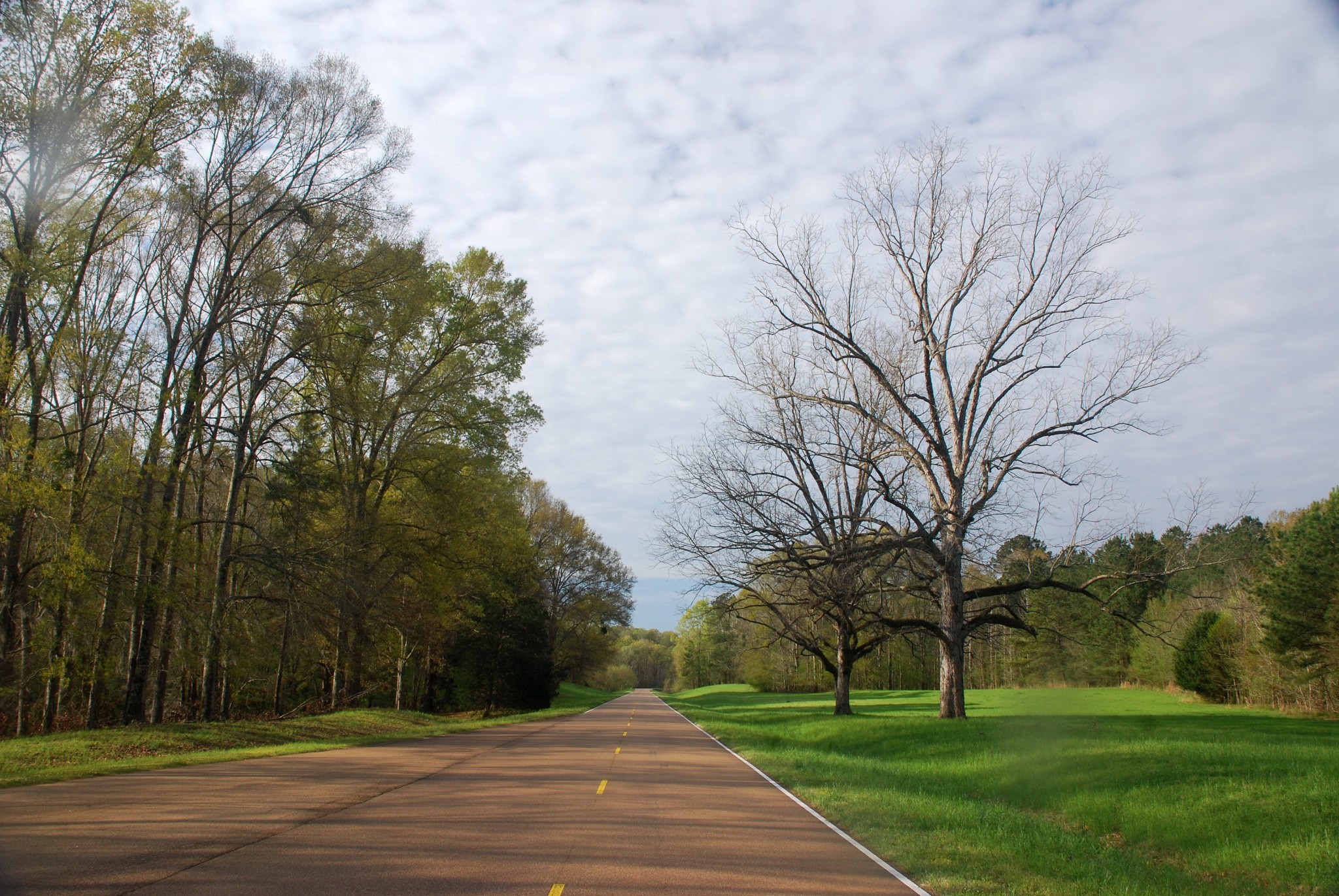 If you’re like a lot of people, you love to drive and you love road trips, but you hate the daily combat of a freeway commute.  Podnuh, I have a treat for you.

Don’t expect rugged countryside here.  It’s just hilly enough that the road is one graceful curve after another.  It’s mostly forested, although you’ll pass several farms and pastures.  You won’t pass through any cities or towns; in fact, there are no traffic signals or stop signs.  I drove good chunks of the parkway in Tennessee and southern Mississippi last month, and I found it mesmerizing to mosey along at the 50 mph speed limit listening to Vivaldi on my iPod.  Traffic is always light.  During my road trip I passed fewer than one other vehicle per mile, on the average.  This is a wonderful route for bicyclists.

The parkway follows the route of the historic Natchez Trace – a trail with great historic significance.  It was first used by native Americans.  Indian mounds at various locations along the parkway are evidence of ancient civilizations.  Later, in the early days of European discovery and settlement, it became the primary route to the Gulf of Mexico ports of New Orleans and Mobile.  In the period after the Revolutionary War, farmers in the Ohio River Valley would build flatboats, load their goods on them, then sell the goods and boats in New Orleans or Natchez and return home via the Trace.  That was one long walk.  Rustic inns or “stands” along the way provided shelter.

The National Park Service has done a marvelous job with the Natchez Trace Parkway.  The entire route is well-manicured.  I’ve never seen litter along the road.  As you drive the parkway, you’ll pass wheelchair-accessible restrooms every 30 miles or so.  You’ll also find numerous historic sites, a dozen or so nature trails, and two dozen picnic areas, all with trash bins. One of the most interesting stops is the site in Tennessee where Meriwether Lewis (as in Lewis and Clark) died under mysterious circumstances.  Another is a cypress swamp north of Jackson, where you can walk the boardwalk trail and maybe see an alligator.

By design, you won’t find gas stations, food or lodging.  Those can be found in nearby towns, often just off the parkway.  There are three primitive campgrounds, including one just for bicyclists.  The NPS map shows the locations of all these services.  You can access the map at www.nps.gov/natr.

I doubt very many people drive the Natchez Trace Parkway from end to end, although I met a retired couple from Virginia doing the end-to-end drive in a rented Mustang convertible.  I would recommend you drive the southern portion in the spring, when the flowers are blooming, and the northern portion in fall, when the trees are ablaze with color.  If you decide to make the full drive, a great place to break it up is Tupelo, Mississippi, near the midway point.  That’s the location of the parkway’s headquarters and primary visitor center.  The city of Tupelo, a few miles off the parkway, has plenty of services for visitors; it’s also where you’ll find Elvis Presley’s birthplace.  There’s another, smaller visitor center just north of Natchez.

The southern end of the Natchez Trace Parkway can be found just north of Natchez via US 61.  The northern terminus is at Tennessee SR 100, just southwest of Nashville.

This week’s road trip takes us to Fort Scott END_OF_DOCUMENT_TOKEN_TO_BE_REPLACED

You can run out of adjectives really fast when describing END_OF_DOCUMENT_TOKEN_TO_BE_REPLACED