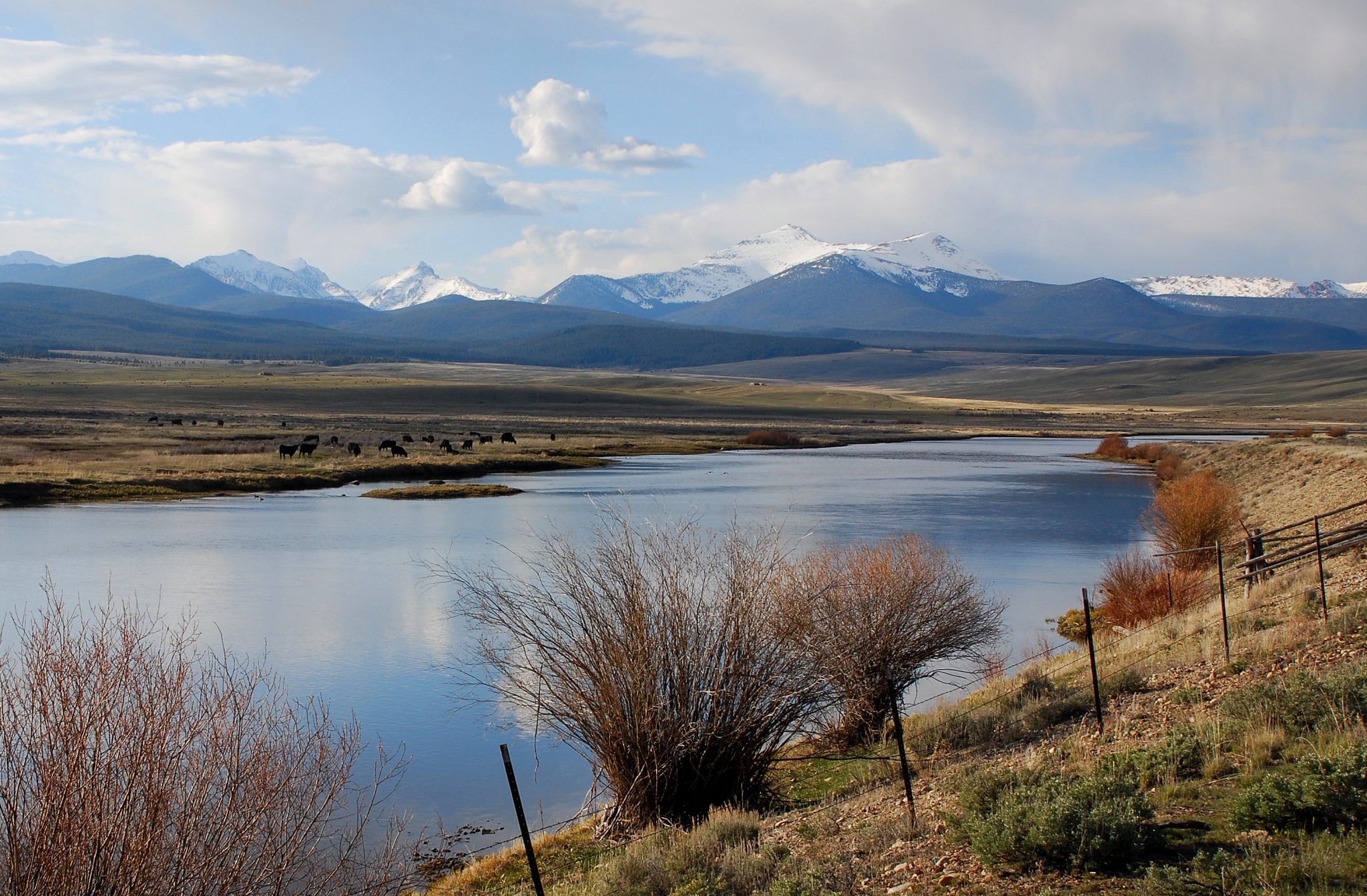 This week, I want to take you to a very special place – Montana’s Big Hole Valley.  Here, you’ll find sublime scenery, great outdoor recreation, one of the West’s best ghost towns, and cattle ranches that have been run by the same families for multiple generations.  You’ll also find an escape from the 21st-century urban lifestyle and all its stresses.

What you won’t find are many people.  The Big Hole Valley is BIG.  At 59 miles by 39 miles, it’s bigger than Delaware and twice the size of Rhode Island.  Yet only about 900 people live here.  Most raise cattle, as well as the hay that sustains their herds during the long Montana winters.

Despite the valley’s size, you’re surrounded on all four sides by mountains that are snowcapped most of the year.  To the north and west the mountains form the continental divide.  The valley is drained by the 150-mile-long Big Hole River, which runs wild and undammed from the great divide all the way to the Beaverhead River near Interstate 15.  Fields and pastures stretch out forever, all the way to the base of the mountains.  The Big Hole is nicknamed “Valley of 10,000 Haystacks.”  Here and there, you’ll spot the giant wooden contraptions called “beaver slides.”  More on those later.

Texture and spirit of The Old West

Chances are, you’ve never heard of the Big Hole — not unless you’re one of the fly fishermen who come from all over the world to fish the legendary Big Hole River.  The Big Hole is one of seven blue-ribbon trout streams in the state.  Its upper portion is the only place in the lower 48 where you can find river-dwelling arctic grayling.  However, most people who fish the Big Hole are after rainbow, brown and brook trout.  The fishermen are concentrated along the river’s fast-moving sections just north and east of the valley.

To me, what’s really special about the Big Hole Valley is that it comes closest, of every place I’ve been, to the texture and spirit of the Old West.  There are no frills here.  No golf courses.  No brewpubs.  If you want to experience the great outdoors while being pampered in luxury accommodations, this probably isn’t the place for you. Instead, I might suggest Big Sky here in Montana or Sun Valley, Idaho.  The Big Hole is where you can breathe deeply, enjoy the views that go on forever, visit a National Park Service unit and a terrific ghost town, and meet genuine Montanans who wouldn’t trade their lifestyle for any other.

The valley isn’t far from I-15.  It’s only about three hours from Yellowstone and makes a great two-day detour. You’ll find motels in Dillon, where you turn off the freeway for the valley’s southern end, and Butte, near the north end.  Butte is an actual city, but it’s the grittiest town in the state – we’ll do a separate feature post on Butte later in the year.

But don’t stay in either.  Get a room at one of the motels in Wisdom, the valley’s unofficial capital, with a population of about 100.  There, in addition to a bed, you’ll find a gas station, a café, a saloon and a few outfitters.  Be sure to head to the saloon and have a cold beverage and conversation with some of the locals. Staying overnight is essential; you can’t catch the valley’s spirit on a quick drive-through.

Camping?  You’ll find plenty of campgrounds in the nearbv national forest and at Bannack State Park. You can even pitch a tent at American Legion Park in Wisdom.

Delta Airlines has two flights daily to Butte from Salt Lake City.  For me, since I hate those 50-passenger regional jets, I’d prefer to fly to SLC, then make the six-hour slog up I-15.  For those hardcore road-trippers who want to drive there from points south, take I-15 to the US 93 exit 22 miles north of Las Vegas, then drive 795 miles north to the junction with Montana SR 43.  From Seattle or the Midwest, follow I-90 to Butte, then I-15 south.

The Big Hole Valley was originally a buffer zone for the Nez Perce, Shoshone and Blackfeet people.  Lewis and Clark were the first non-natives to see the area.  They visited the spot where the Big Hole joins the Beaverhead in 1804.  The latter had a gentler current, so the Corps of Discovery took that route on their way to the Pacific.  They named the river and valley “Wisdom” after one of the attributes of their patron, Thomas Jefferson.  The river and valley, though, later became known as Big Hole; “Wisdom” only stuck to the town.

Fur trappers moved into the valley between 1810 and 1840, followed by homesteaders in the 1870s.  What dictated the valley’s future and drove what you see today was the success of mining and the arrival of the railroad in Butte.  That created a market for beef, dairy products and cattle, assuring the valley’s economic viability.

In 1910 valley ranchers developed and patented a hay stacker known as the “beaver slide.”  This odd-looking contraption stacks up to 20 tons of hay into a pile 30 feet high.  Most have disappeared, but you can still see them around the valley.  If you’d like to see how a beaver slide works and meet some of the people who use them, I highly recommend this short video:  www.youtube.com/watch?v=ORQq97d3a8A&t=36s.

I’m not a fisherman, so I won’t offer any guidance, but you’ll find everything you need to know online.  Here’s a YouTube video you might find useful:  www.youtube.com/watch?v=ARE1iUAmNbI

There are also three other attractions you should consider.  First is Bannack, a former mining boomtown that became Montana’s first territorial capital, then withered when the mines played out.  Fortunately, the State of Montana took over and has preserved Bannack’s ruins as a state park.  Don’t miss Bannack! Only Bodie in California can match it as a genuine mining relic.  A side road leads to Bannack from CR 278 near the southern end of the Big Hole Valley.

We did a feature on Bannack in September 2015.  To view it, type “Bannack” in the search box on the landing page.  For current details, go to www.bannack.org.

Next is the Big Hole National Battlefield, located 10 miles west of Wisdom just off SR 43.  Here, in August 1877, U.S. Cavalry forces fought with a band of Nez Perce trying to escape to Canada after the federal government broke multiple treaties.  Ninety Nez Perce and 31 U.S. troops were killed in the conflict.  After viewing exhibits in the visitor center, you can walk short trails to the actual battlefield.  Go to www.nps.gov/biho/index for details.

Third, you’ll want to drive the Pioneer Mountains Scenic Byway, which runs north-south through the range forming the eastern end of the Big Hole Valley.  The drive connects Wise River (39 miles downstream from Wisdom) with Polaris, located 28 miles west of Dillon off CR 278.

It’s not Montana’s most spectacular mountain drive, but it’s a pleasant cruise on a paved road through forested countryside.  You’ll find several U.S. Forest Service campsites along the way.  None were full when I passed by in late June.  The only crowd I encountered was the cattle drive pictured on this page.

For a nice description of the byway, go to www.distinctlymontana.com/montana-wildlife/09/08/2011/beaverhead-scenic-byway

Thanks for visiting Road Trips with Tom.  I hope I’ve convinced you to put the Big Hole Valley on your road trip bucket list.  It has a permanent place on mine.  Please join me Sunday, July 30, as we go from the Old West to the nation’s birthplace — Independence National Historic Park in Philadelphia.

This week’s road trip takes us to Fort Scott END_OF_DOCUMENT_TOKEN_TO_BE_REPLACED