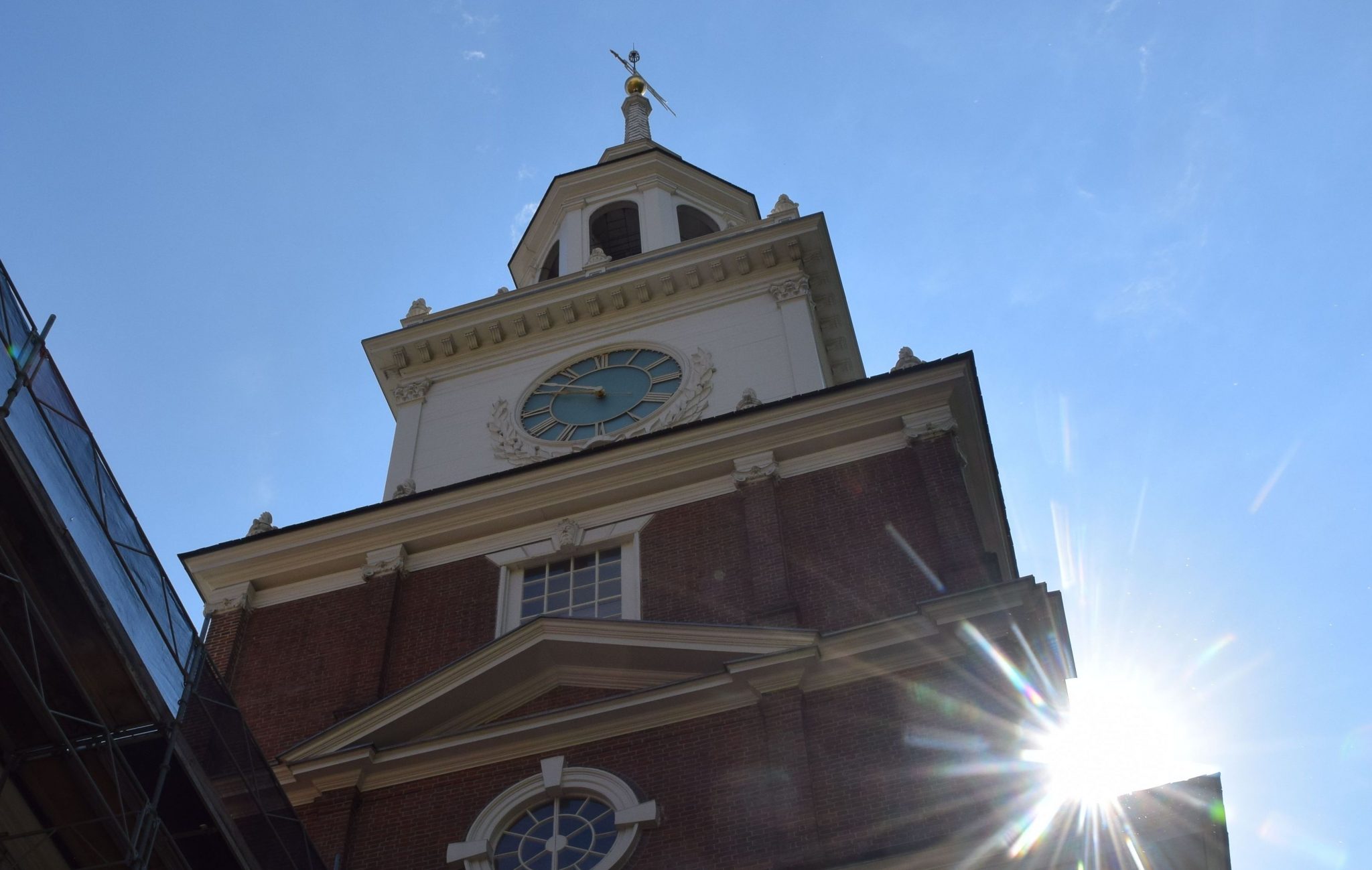 This week’s destination is Independence National Historic Park in Philadelphia.

Like most people, I like its iconic city hall.  I like the boathouses on the Schuykill River.  Along with just about everybody, I like the Rocky statue and steps at the Philadelphia Art Museum.  I like Philly’s raucous sports fans, who ardently support the city’s teams even though those teams are perennial losers.  And, of course, I like the cheesesteaks.

Most of all, however, I like the history.  For someone who grew up in a California beach town, Philadelphia is a history book come to life.  It was founded by William Penn in 1682.  That’s 87 years before the first European settlement of what is now California.

If you like history, you can’t do better than this.  It’s the cradle of American independence and birthplace of our nation.

I would rate Philadelphia among the dozen-or-so “must see” road trip destinations.  No matter where you’re coming from, you’ll find other worthwhile stops along the way – cities, beaches, battlefields, historic sites, and so on.

In this post, I invite you to join me on a half-day visit to the essential sites in Philly’s Independence National Historic Park.  Along the way, I’ll show you what it looks like, explain the procedures and hassles of visiting these shrines (yes, there are some hassles), and try to describe the value of the visit.  The date was Sunday, May 14.

Let’s start with some resources:  The National Park Service explains how and when to get tickets for Independence Hall – the park’s main attraction.  Go to www.nps.gov/inde.  The is the best sources for planning your trip.

The park has 19 YouTube videos about the park.  You’ll find them at www.youtube.com/user/IndeNHP.  I suggest you spend time with these before leaving home for an in-depth perspective on what you’ll see.

Before we begin our visit, I need to give you a couple of heads-ups.  First, you’ll be spending a lot of time standing around and waiting in line.  There’s airport-style security at both Independence Hall and the Liberty Bell Pavilion.  Second, there’s scaffolding on both Independence Hall and Congress Hall.  A security guard told me there’s always scaffolding in that area.

My first stop was the Independence Visitor Center at 6th and Market Sts.  Parking is always an issue in big cities, but there’s an underground garage right beneath the visitor center.  To find it, get on 6th, heading south in the left lane.  Just beyond Arch St. is the entrance.  A flight of stars or an elevator will take you to the entrance to the visitor center.

Lots of waiting around

The visitor center opens at 8:30.  I planned to arrive at 8, because I didn’t know what to expect with regard to parking.  Having checked out my route on Google Street View, I made great time and got there even earlier.  Unfortunately, that meant a 40-minute wait for the VC doors to open.

Tours of Independence Hall begin at 9.  I chose the 10 o’clock tour to allow time for visiting the Liberty Bell and taking photos.  From the VC door, I could see the scaffolding would hinder my photography, so I crossed Market St. to the Liberty Bell Pavilion.  That, too, didn’t open until 9, and there was a line of people waiting for the doors to open.  When they did, we were led to a security station, which took several minutes to get through.

There were a few displays, but mostly it was all about the Liberty Bell, which is mounted on a stand at the south end of the pavilion.  So . . . there it is.  You look at it, take a couple of photos, and you’re done.

The Liberty Bell was installed in the tower in the 1850s.  No one seems to know for certain how it acquired its distinctive crack.  The National Park Service moved the bell to its current location in a separate pavilion in 1976.

Allow time for Congress Hall before the Independence Hall tour

However, there’s a special exhibit in the West Wing called “Great Essentials.”  Don’t miss this!  There, you’ll find original printed copies of the Declaration of Independence, Articles of Confederation and the U.S. Constitution, along with the inkstand used in the signing of the Declaration of Independence.  Flash photography isn’t permitted, and there isn’t enough light for photos.  I dawdled there until my tour time.

Independence Hall was begun in 1732 but wasn’t completed until 1753.  It was built piecemeal as funds became available.  The building served as the Pennsylvania State House until 1775, when it became home to the Second Continental Congress.  Next, it was the site in 1787 of the Constitutional Convention.

The tour of Independence Hall takes in the two main rooms on the ground floor.  First is the courtroom.  I hung toward the back and realized once our group entered that may have been considerate, but it was also stupid.  To get photos, I had to lean around people.  After getting a couple of passable shots, I went back into the corridor, checked out the assembly hall, and selected the spot that was best for photos.  When the ranger started herding his group to the assembly hall, I was the first person through the door and was able to get the photo you see below.

We exited the front door of Independence Hall, where the ranger gave a very nice patriotic talk about what our forefathers created here.  The exit went directly onto Chestnut St.  That meant that taking the tour of Congress Hall would involve going through security again.  The line for that had grown considerably, and the crowd was now backed all the way to the sidewalk.  So I skipped it.

There’s more if you’re up for it

For all the waiting and standing, Independence Hall was well worth visiting.  If this historic shrine doesn’t stir pangs of patriotism in you, I’d be very surprised.  I was impressed with how people with disparate viewpoints worked together to create something bigger than themselves.  That lesson seems to be lost on the current leaders of both parties.

That was it for me, but there’s lots more to see if you’re game.  Check the park’s website to fill out your itinerary.  My parking was $17.50, but entry to the park sites was free.

Thanks for joining Road Trips with Tom.  Next Monday, August 7, we’ll head to beautiful San Diego and visit one of the museums in Balboa Park.

This week’s road trip takes us to Fort Scott END_OF_DOCUMENT_TOKEN_TO_BE_REPLACED