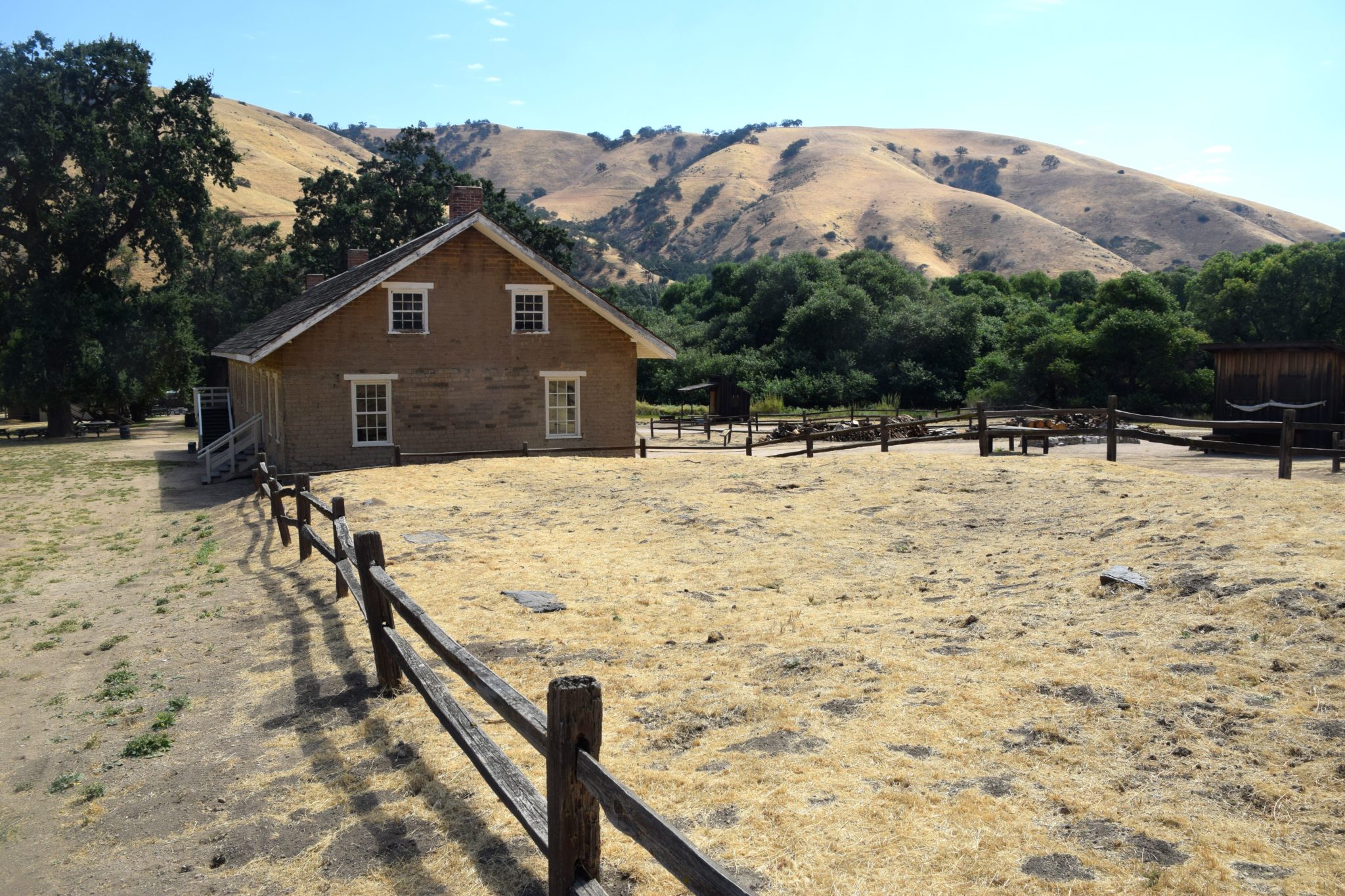 It’s back to California this week for Road Trips with Tom, as we visit Fort Tejon State Historic Park in the Tehachapi Mountains north of Los Angeles.

With this post, I’m going to do you a favor.  As many of you know, driving Interstate 5 – the highway connecting LA with the Central Valley, San Francisco Bay Area, Sacramento and the Pacific Northwest – is a grind.  There’s nothing romantic about a road trip on this route.  The mountains may be attractive, but the traffic is intense and demands your full attention.  The San Joaquin Valley to the north is downright ugly.

From the San Fernando Valley, I-5 traverses country so rugged that at one point the northbound and southbound lanes actually crisscross one another.  No railroad has ever been built along this section, which was historically known as the Ridge Route.  The freeway is a lot easier to drive than the old Ridge Route, but it still makes a steep plunge down the infamous Grapevine Hill to the San Joaquin Valley.

So how about a great rest stop right at the top of Grapevine Hill?  At Fort Tejon, you’ll find the remains of a frontier army post that was active from 1854 to 1864.  Three adobe brick buildings have been restored, and foundations of other buildings are marked and shown on the map you get when you enter.

Fort Tejon has everything you want in a rest area – easy access, convenient parking, restrooms, shade and picnic tables.  Like a rest area, it has its own exit, whether you’re northbound or southbound.  The big plus is the history.  For that, you pay a modest fee of $3 for adults and $1 for kids 7-17.  The distance from downtown L.A. is about 75 miles.

For more information on the park, go to www.parks.ca.gov/?page_id=585sa.  The web site also has a short YouTube video.

Camels and an earthquake

California has only been U.S. territory since the late 1840s and a state since 1850, so this was a remote location when Fort Tejon was established in 1854.  The fort’s job was to protect settlers from attacks by Native American tribes and discontented pre-statehood residents (called “Californios”).  At Fort Tejon the First U.S. dragoons built 40-some buildings and all the accoutrements of a frontier military post.

When the Civil War broke out, the dragoons were sent east to fight.  They were replaced by three cavalry companies of California volunteers, who suppressed violent attacks by Paiutes, which resulted in the natives being relocated to the Tule River Reservation farther north.

Two other significant events occurred here.  In 1857, an earthquake measuring 7.9-8.2 on the Richter Scale – one of the most powerful in U.S. history – shook the area.  (Oh, yes, you’re right on the San Andreas Fault here.)  A couple of years later, the army experimented with camels as a way to cut messenger services.  The experiment failed, and the camels were sent to L.A. and sold.  The army closed the fort in 1864.

From the parking lot, you cross Grapevine Creek, which runs year-round, aned pay your admission fee.  In front of you is a large meadow – the fort’s former parade ground.  Turn left, and you’ll find the restrooms and a small visitor center.  Just beyond that is a very nice picnic area.  This is a lovely, peaceful spot . . . if you can ignore the truck traffic less than 200 yards away.

Come for the monthly reenactment

A half-mile trail loops around the parade ground, providing access to the dragoons’ barracks and officers’ barracks.  The recently restored quartermaster building is a short distance to your left.

Fort Tejon State Historic Park hosts a number of special events year-round.  For example, a reenactment featuring costumed interpreters is held the first Saturday of each month.  I attended this month’s event on August 5.  Highlight was the firing of the cannon.  Also, interpreters were stationed in all the restored buildings to demonstrate what life was like here.

Special events take place from 10 to 3.  Admission on those days is $5 for adults and $3 for kids 7-17.  For details, including a schedule of upcoming events, check the park’s web site.

There’s no food service or vending machines, so bring what you need for your picnic.  You’ll find food, lodging and gasoline at the Frazier Park and Gorman exits.

Thanks for visiting Road Trips with Tom.  Please join me next week as we visit
Theodore Roosevelt National Park in North Dakota.  By the way, in case you missed the Facebook announcement, the blog is now updated every Monday instead of Sunday.

Welcome to Benefit Street – the most impressive neighborhood of END_OF_DOCUMENT_TOKEN_TO_BE_REPLACED

This week, Road Trips with Tom steams down the mighty END_OF_DOCUMENT_TOKEN_TO_BE_REPLACED