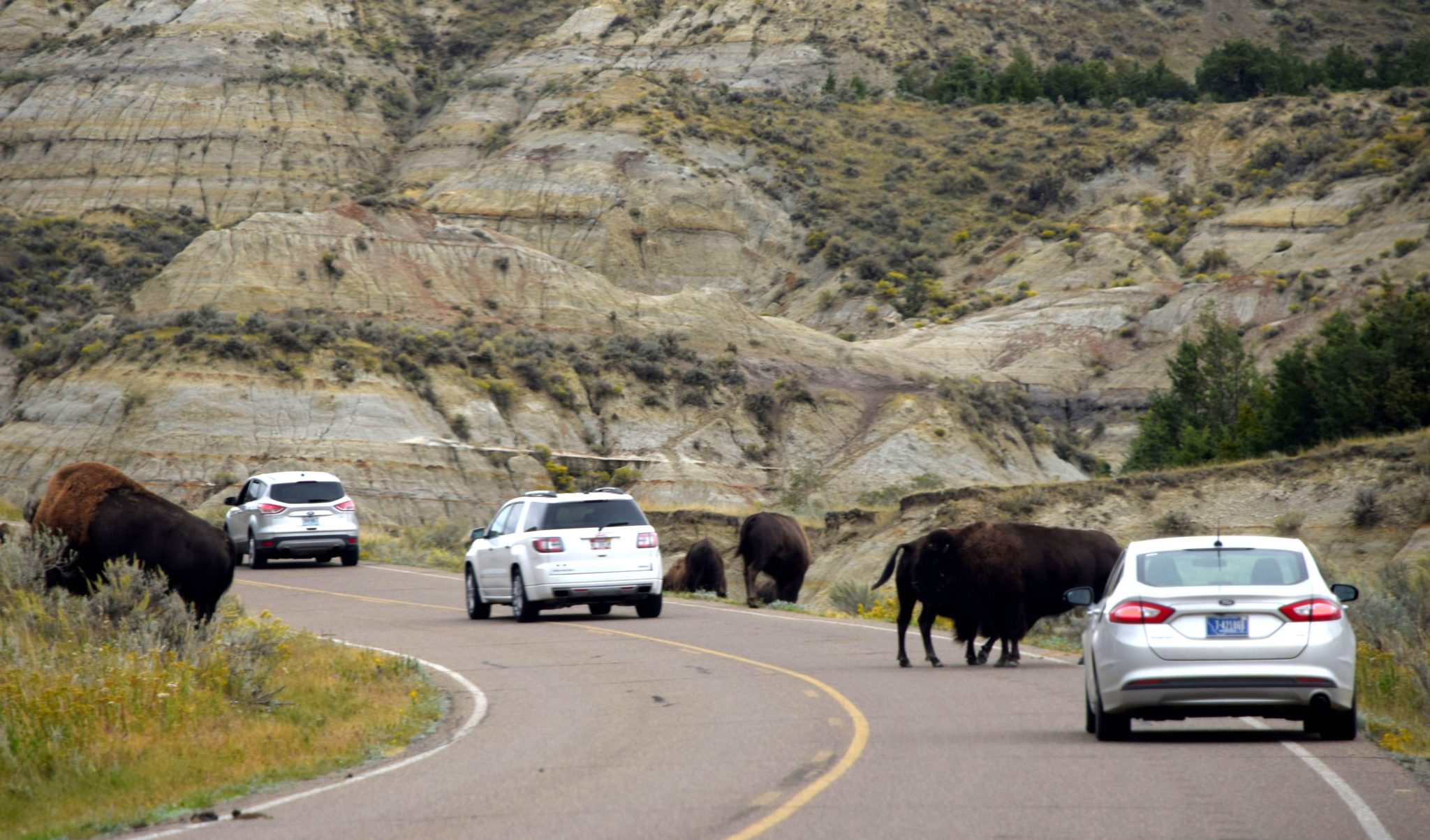 Our destination this week is TR Park in North Dakota.  That ‘s the unofficial name for Theodore Roosevelt National Park.

North Dakota?  Isn’t that a state where the closest thing to a mountain is the ant hill on some farmer’s north forty?  Where the mean temperature is less than that of a glacier?  Sure, the eastern part of the state is mostly level.  West of the Missouri River, however, erosion has created buttes and badlands.  And yes, winters are frigid here, but vacationers don’t visit in winter, and neither should you.

If you ask all Americans what states they’ve been to, North Dakota would be the least-visited among the lower 48.  That’s more because it’s off the beaten travel track than a lack of reasons to visit.  I liked TR Park, and you will, too.  You’ll it in western North Dakota, where the Little Missouri River has eroded bentonite clay and other formations into colorful badlands.

The park has two units.  The south unit – far and away the most heavily visited – is bisected by Interstate 94.  The smaller north unit is about  50 miles distant.  Both units have scenic drives, hiking trails, campgrounds and lots of wildlife.  For a short YouTube video, go to www.youtube.com/watch?v=bLyJNwN1rOY

NOTE:  Some of the direct links to specific areas of the National Park Service website don’t work when I enter them here, even though they worked fine when I tested them in my MS Word original draft.  Instead, I’ve provided the path you can take from the park’s landing page.  Sorry for the inconvenience.

TR isn’t a primary destination, but it’s a terrific half-day or overnight stopover for Midwest-based road-trippers headed for Glacier, Yellowstone or Grand Teton National Parks, not to mention the Pacific Northwest or the Canadian Rockies.   How does TR compare with Badlands National Park in South Dakota?  The badlands here are gentler, less stark and more vegetated.  They also have more wildlife.  You can check out our earlier post on the South Dakota badlands by typing “Badlands” into the search box.  You can also easily combine both parks into a single loop that includes Mt. Rushmore and other Black Hills destinations.

It’s a rare visitor who doesn’t see bison and prairie dogs here.  You might also see elk and wild horses as well.  Pronghorn hang out in and around the park’s north unit.

This is the only U.S. national park named for someone.  Theodore Roosevelt and the Little Missouri Badlands developed a strong relationship that had a lasting effect on conservation in the nation.

TR was a pampered rich kid from New York who traveled in Europe with his parents, graduated from Harvard and served in the New York State Assembly.  At heart, however, this nerdy-looking tenderfoot with thick spectacles harbored a desire to hunt bison somewhere in the West.

In 1883, he took a three-week hunting trip to North Dakota and invested $14,000 in a ranch in the Little Missouri Badlands.  After impressing his hired companions with his energy and drive, TR asked them to build a cabin so he could adopt the western lifestyle he’d fantasized about.  He then returned to New York and his pregnant wife.

Tragedy struck the following year.  His wife and his mother died within hours of one another.  Grief-stricken, TR returned to North Dakota and threw himself into the lifestyle of a rancher.  He named his original cabin Maltese Cross, then established a second ranch, Elkhorn, in a remote location 30 miles north.

Extremely harsh winters – this IS North Dakota after all – as well as a rejuvenation of his political career, led to the end of his ranching days after a few years.  However, his experiences in North Dakota fine-tuned and energized the conservation ethic that made him a champion of the national park system.  For more about Theodore Roosevelt, go to www.nps.gov/thro  then follow this path:  Learn about the park > History and Culture > People > Theodore Roosevelt.

I-94 rest area offers a preview

Okay, let’s get specific about the park.  Just about everybody arrives via I-94.  Here are the important exits.  First is Exit 32, where you’ll find an interstate rest area that’s also a viewpoint overlooking the park badlands.  There’s even the small, ranger-staffed Painted Canyon Visitor Center that’s open May-October 8:30-5:30.  The area is accessible from both directions on the interstate, and there’s no entry fee.  For the north and south units, however, entry costs $25 for cars and $20 for motorcycles.

Want a preview?  Check out the webcam at www.nps.gov/thro/learn/photosmultimedia/webcams.htm

Next is Exit 27, which is the access road for the town of Medora for westbound travelers.  The park entrance is on Medora’s main drag.  Exit 24 is the Medora exit for eastbound travelers.   If you’re one of the rare visitors who wants to go directly to TR Park’s north unit, use Exit 42 and drive about an hour north on US 85.

By the way, the time zone boundary zigzags in this part of the state.  As a result, the south unit is in the Mountain Time Zone, while the north unit follows Central Time.

The south unit entrance is just north of Medora.  The visitor center is open daily, 8-4 (until 6 in summer) except major holidays.  There, in addition to the usual helpful rangers, park movie, exhibits and bookstore, you’ll find Roosevelt’s Maltese Cross Cabin just outside.  Rangers lead tours, but you can enter it anytime.  It gives you a good idea of the rustic life the future President lived in North Dakota.  Most furnishings are period pieces, but a few, including the writing desk, were TR’s.

Beyond the visitor center is the 36-mile scenic drive that loops through the badlands, providing access to hiking trails and almost always giving you a chance to see wildlife.  (Frankly, if you don’t see bison on this drive, you’re not paying attention.)  For a preview and map showing hiking trails, go to www.nps.gov/thro then use this path:   Plan Your Visit > Things to Do > Hiking.

For most visitors who stop at the Painted Canyon Rest Area, visit the main visitor center, check out the Maltese Cross Cabin, take the scenic drive, and hike a couple nature trails, you’re looking at about 4-5  hours.

In the north unit, you’ll find a small temporary visitor center open 9-5 daily, along with a 12-mile scenic drive.

TR Park’s visitation last year was 753,000.  That seems inflated at first glance.  Turns out it includes people who only stop at the Painted Canyon rest area, then continue on I-94.  The ranger at Painted Canyon has a clicker for recording everyone who stops, even it it’s just to use the restroom.

No big crowds at TR Park

My experience, based on a visit in mid-September of 2016, suggests you’ll never experience big crowds TR Park.  In the north unit, you might even have the place to yourself.  What a contrast from the awful overcrowding in Yosemite National Park reported in today’s (August 12) Los Angeles Times.

Each of the park’s units has a campground with sites (no hookups) going for $14 per night.  At the Cottonwood Campground in the south unit, half the sites can be reserved.  For details, click on camping from the park website’s landing page.  You’ll find picnic tables and restrooms near the campgrounds.

Medora has gas, food and lodging, but it’s a tiny town.  For a much bigger selection, go to Dickinson at Exit 61.

Lastly, I’m sorry my photos aren’t better.  The day of my visit was overcast and scuzzy.

Thanks for visiting Road Trips with Tom.  Next week, we’ll head to the very nice San Diego Air and Space Museum.

This week’s road trip takes us to Fort Scott END_OF_DOCUMENT_TOKEN_TO_BE_REPLACED