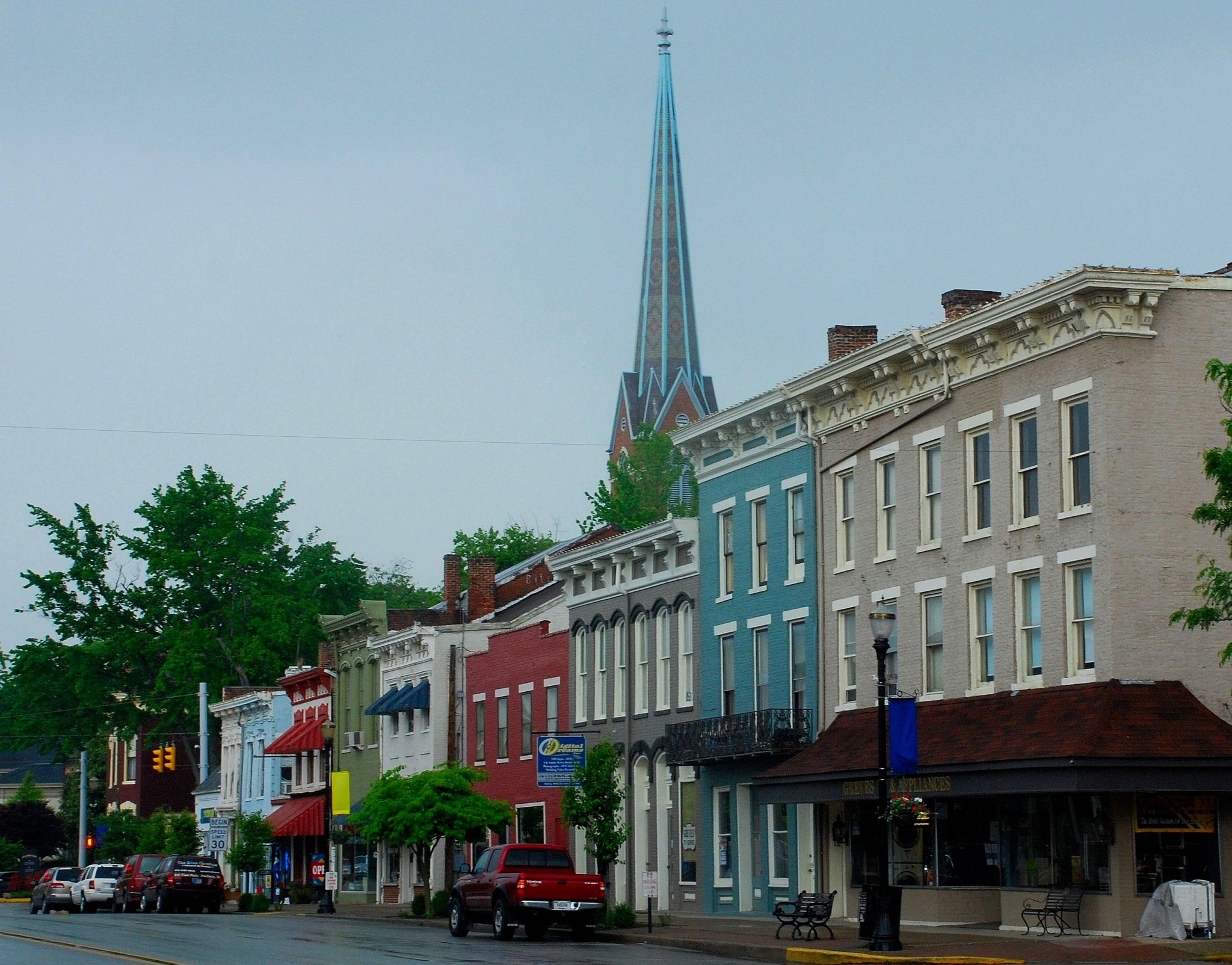 Welcome to Madison, Indiana.  As cool small towns go, this is one of the coolest.  I really like Madison, and you will, too.

Look at any list of America’s best small towns, and there’s a good chance Madison will be there.  It’s an utterly charming collection of 19th-century buildings full of shops, galleries, restaurants and beautiful homes.  The entire downtown is a National Historic Landmark – the largest such contiguous district in the country, encompassing a whopping 133 blocks.  Here you’ll find a vibrant collection of two- and three-story buildings that suggest what America was like prior to World War II.

This was made possible by what you might call a “perfect storm” of history and geography.  Madison was founded in 1809 and became wealthy as an Ohio River port and point of origin for Indiana’s first railroad.  This wealth was reflected in dozens of handsome houses and business buildings.  When its role as a transportation hub declined after the Civil War, Madison continued to grow, although more slowly.  However, instead of constructing new buildings, developers focused on modernizing older ones.  As a result, Madison’s National Historic District now contains examples of all the major architectural styles of the 19th and early 20th centuries, from Federal to Greek Revival to Art Moderne.

Madison’s geography played an important role in creating what you see today.  New development has occurred on top of the bluffs, north of the city.   That’s where you’ll find chain motels, chain restaurants, McDonalds and Walmart.  Driving into Madison, you don’t have to pass through a strip of gas stations and fast food outlets like you do almost anywhere else.  It’s as if the 21st century is out of sight and out of mind.

As you might expect, Madison draws lots of out-of-town visitors, especially on weekends.  It’s a relatively short drive from Louisville, Indianapolis and Cincinnati.  The town’s population of about 12,000 will swell considerably on holiday weekend.  A delightful aspect of Madison is its people.  They love their town, but there’s none of the smugness you’ll find in places like Colorado or Vermont; i.e., “I live here.  Therefore, I’m cooler than you.”  This is, after all, Indiana.  People are genuine here.  You might even run into Floyd the Barber.

Plan on spending at least one full day here.  A good place to start your visit is along the riverfront.  To get there, simply turn south from the main drag on almost any side street.  Much of the riverfront is a nicely landscaped park, where locals stroll, jog, bicycle and walk their dogs.  There’s a marina and a boat launch, as well as benches where you can sit and watch the river slide by.  The Ohio gets lots of traffic, so you won’t have to wait long to see a barge pushing or pulling its cargo.  Madison is also a major site for hydroplane racing, which draws big crowds to the riverfront.

One of Madison’s top attractions is the Lanier Mansion, built in 1844 by a wealthy banker.  Now a state historic site, it’s considered an outstanding example of Greek Revival architecture.  The house faces the river across an extensive landscaped garden.  Both the exterior and interior have been restored to reflect Mr. Lanier’s time.  The house is open 9-5 daily, with tours every hour on the hour.  Admission is $9 for adults, $8 for seniors, and $4 for children 3-12.  To get there, turn south from Main St. on Vine St. There’s a sign to direct you.  The Lanier Mansion is a good place to begin a walking tour of Madison’s old homes.  You’ll find a mix of architectural styles on West 1st and 2nd Sts.

You’ll also want to stroll down both sides of Main St. and visit the shops and galleries.  Treat yourself at Horst’s Bakery, Hinkle’s Sandwich Shop, the Fudge Factory or the JWI Confectionery.

Lastly, if time permits, visit nearby Clifty Falls State Park, where you can stroll a wooded path to a nice waterfall.  The park is on the west edge of town.

Madison is at the junction of north-south US 421 and east-west Indiana SR 56.  It’s about an hour’s drive from Louisville or Indianapolis, and a 90-minute drive from Cincinnati.  Want to spend the night?  You’ll find bed-and-breakfasts in the downtown area and mid-priced motels on top of the bluff via US 421.  If you’re road-tripping across Indiana or Kentucky, it’s well worth a detour to see this cool small town.  It’s also within reach as a weekend destination from Chicago, Detroit, St. Louis and other cities.  You can visit Madison just about any time of year, but I recommend spring and fall.  Summers can be hot and humid in the Ohio Valley, and winter days can be dreary.

For more information, surf to www.visitmadison.org 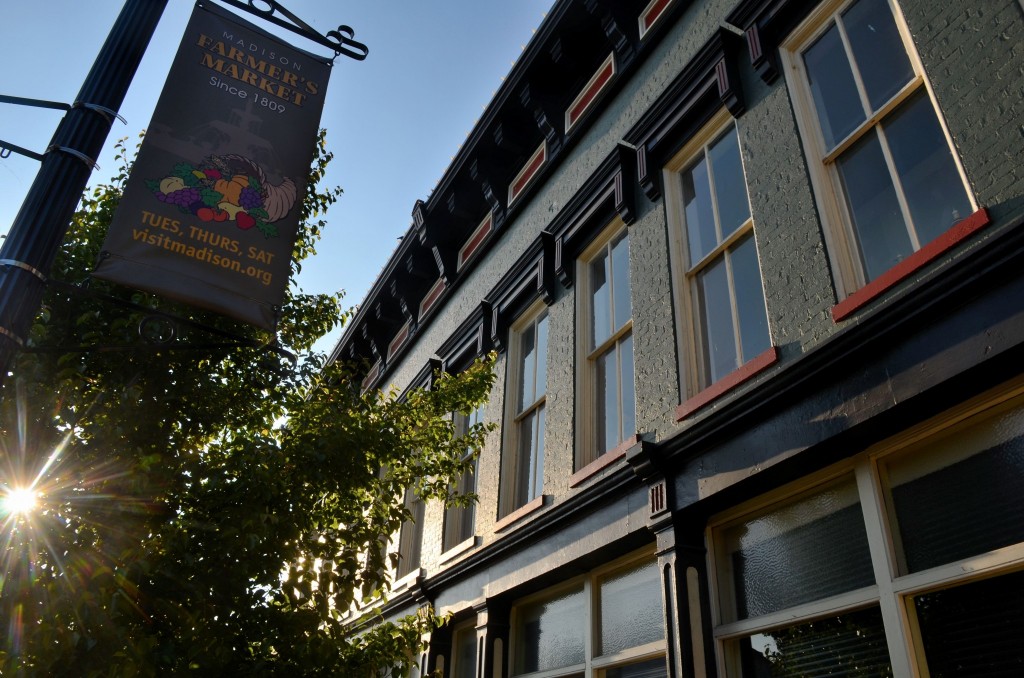 This week’s road trip takes us to Fort Scott END_OF_DOCUMENT_TOKEN_TO_BE_REPLACED

You can run out of adjectives really fast when describing END_OF_DOCUMENT_TOKEN_TO_BE_REPLACED