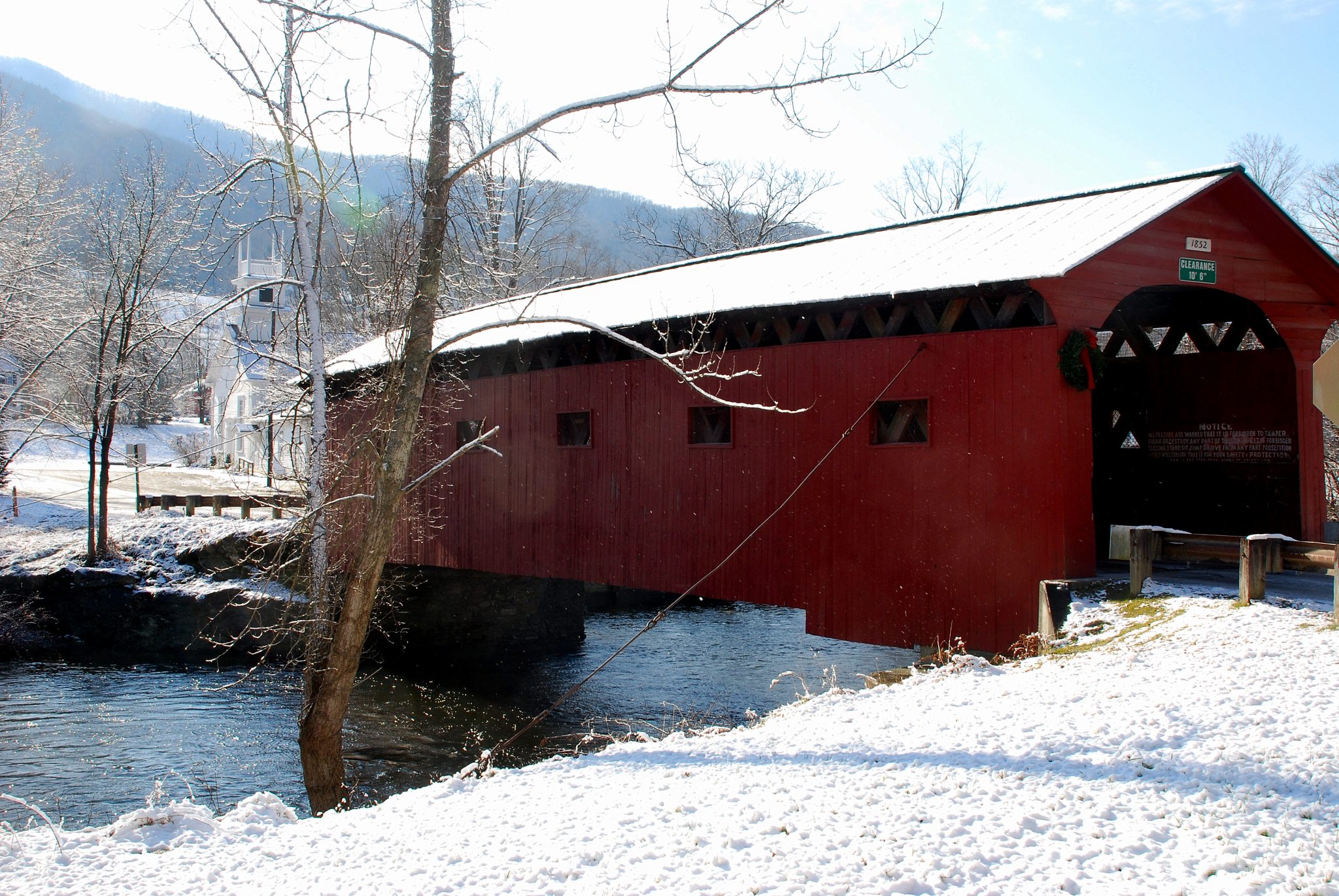 This week, Road Trips with Tom is back in northern New England to visit the Vermont Covered Bridge Museum in Bennington.

You may recognize our feature photo, above.  It’s appeared in this blog before because it’s a favorite of mine.  But this week, it has direct relevance to our topic.  I’ll explain in a few paragraphs.

Covered bridges are interesting.  No two are alike.  They’re colorful anachronisms, although many are still in use by vehicular traffic.  Enough people are hooked on them that there are various preservation groups working to maintain them in parks or historic sites.  You’ll find them in states with plenty of streams that need to be crossed and plenty of timber for building.  California has 11, all of them in the northern half of the state.  You won’t find them in Arizona, Nevada, Utah, Colorado, New Mexico or Texas.  Too dry.  The greatest number are in states like Vermont, New Hampshire, Pennsylvania, Ohio and Indiana.  The best-known bridge is in Iowa, scene of the romantic movie Bridges of Madison County, starring Meryl Streep and Clint Eastwood.

Covered bridges started appearing in the 1830s.  Over 12,000 were built, but only about 10 percent remain.  Some are in museums and parks, while many others are still in daily use.

Why build a covered bridge?  Simple economics.  An uncovered timber plank bridge will last 10 to 15 years of exposure to the elements.  Many of the covered bridges around today were built 150 years ago and are still standing (and in daily use), although some maintenance has helped make that possible.  Another reason for covering the bridge is that horses often shied away when near rushing water.  The covered bridge kept them from being distracted; besides, the bridge looked like a barn.

If you’re going to build a covered bridge museum, what better place than Vermont?  After all, this is a state that attracts huge numbers of tourists to its portrayal of a simpler life – forested mountains, dairy farms, village greens, stately white churches, rushing rivers full of fish, and small towns where everybody knows each other.  The covered bridge fits this vibe like a glove.

It’s also a state with the three necessary ingredients – wood, water and skill.  Vermont has hundreds of creeks, streams and rivers that need to be crossed.  It also has an ample supply of timber.  And finally, it had skilled builders with covered bridge experience, back in the day.  Vermont has 103 covered bridges.  Other states have more (Ohio has the most), but Vermont has the densest concentration within its Lilliputian confines.

Our focus this week is on the state’s southwestern corner, where you’ll find the small-but-bustling city of Bennington and the well-respected Bennington Center for the Arts.  There, instead of a living history museum, is where you’ll find the first museum dedicated to covered bridges.  It’s on SR 9 just a couple of miles west of Bennington’s town center.  (And along the way, you’ll pass what I think is the most beautiful church in New England.)  The Covered Bridge Museum is included with admission to the art museum, which hereabouts is referred to as “The Bennington.”  Hours are 10-5 daily except Tuesday.  Admission is $9 for adults, a buck less for students, seniors and AAA members.  Kids under 12 are free.

Visit The Bennington’s website for more details on the museum complex:  www.thebennington.org/contact/.  Editor’s note:  If this link isn’t “live” in your browser, simply Google “Vermont Covered Bridge Museum, and use the link it provides.

For a nice introduction to the covered bridge museum, watch this video feature from one of Vermont’s TV stations: www.wcax.com/story/30444914/destination-recreation-covered-bridge-museum.

The covered bridge museum is designed to replicate one of the area’s bridges — it’s wider to accommodate the displays.

Lest this begin to sound like a press release, let me tell you about my visit.  It was at 11 a.m. on a Friday in May.  The Bennington appeared to be on skeleton staffing.  There was a young woman at the entrance who was enthusiastic about the museum’s art collection but woefully ignorant of the covered bridge portion.  After not being able to answer several questions, she phoned someone else, then said, “He doesnt know either.”  There was no docent or guide in the covered bridge section and no takeaway.  The displays were excellent, but this is pretty much a “figure it out for yourself” deal.

The museum itself is only part of the attraction.  There are five operational covered bridges within a 10-mile radius, and the museum claims it will provide an audio tour complete with map and directions.  You can check this out in advance by calling (802) 442-7158.  But if you’d like to visit these bridges, here’s how:

Go to www.coveredbridgemap.com/vt/ — map offers thumbnail pix, plus directions (link to Google Maps).  The bridges, listed in increasing distance are:  Silk Road, Paper Mill, Henry (the one the museum’s design is based on), West Arlington, and Chiselville.  You can visit all of them in two to three hours.  Our featured photo for this post is the West Arlington Bridge after a fresh snowfall.

If you’re really into covered bridges, the Vermont Covered Bridge Museum is definitely worth a stop.  It makes a nice weekend trip from Boston or New York.  The nearest commercial airport is in Albany, N.Y.  You’ll find a good choice of accommodations and other services in Bennington. Recommended:  The Blue Benn Diner.

Thanks for spending some time with Road Trips with Tom.  Next week we’re staying close to home and visiting the Bowers Museum in Santa Ana, California.

This week’s road trip takes us to Fort Scott END_OF_DOCUMENT_TOKEN_TO_BE_REPLACED