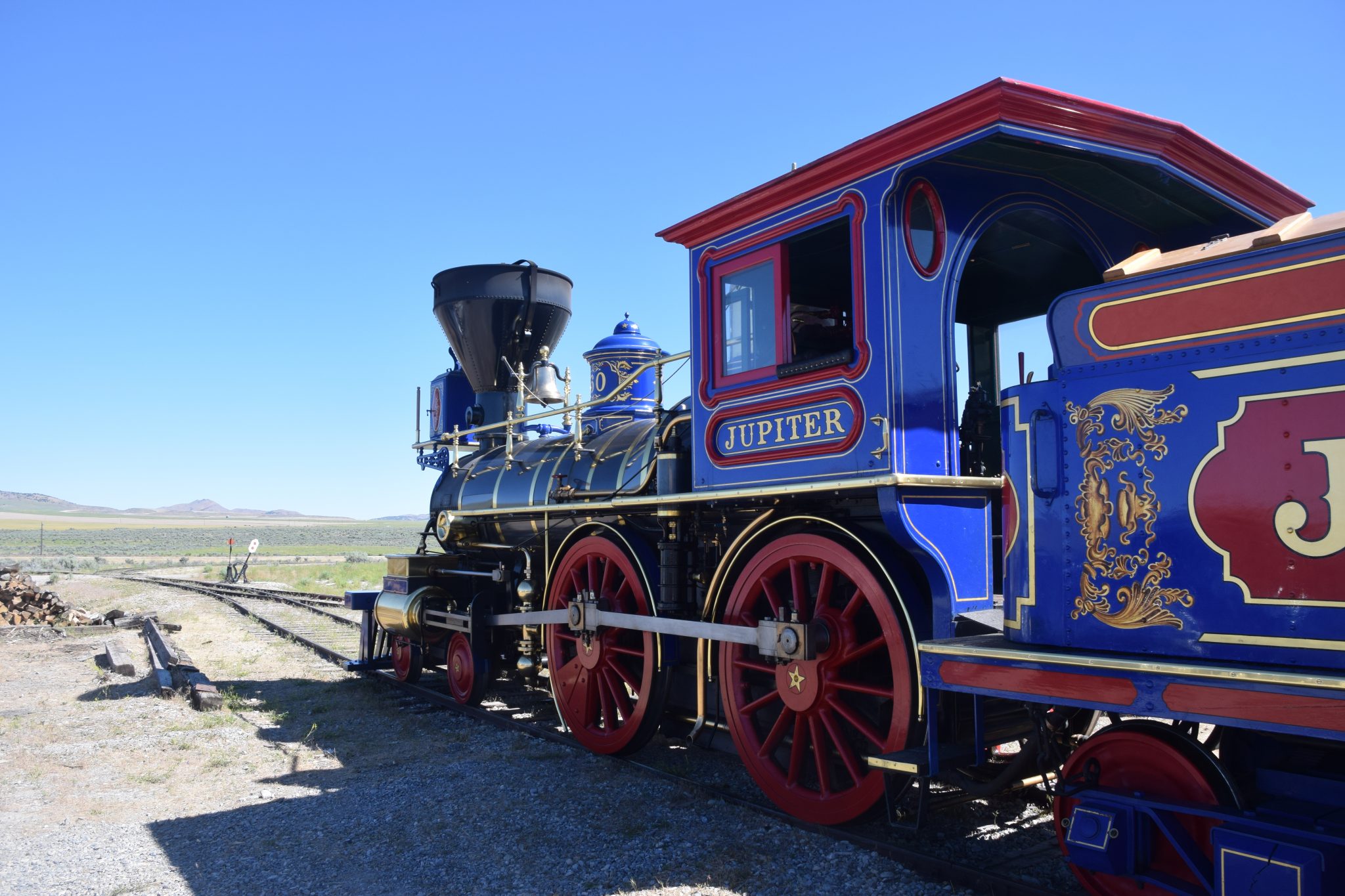 Utah!  Shining mountains, world class skiing, spectacular rock formations, right?  Sorry, Bubba, not this time.  We’re headed to some of the dreariest real estate the Beehive State has to offer.

So why make the 32-mile trek to Golden Spike from Brigham City on I-15?  Because this barren, windswept spot was the scene of an event that literally transformed our country – the completion of the first transcontinental railroad.

A good introduction to the site and its historical background can be found at www.youtube.com/watch?v=XCKiSYp3dSE

Two railroads – the Central Pacific from Sacramento and the Union Pacific from Omaha – met here on May 10, 1869.  After tapping a ceremonial golden spike, they drove the final spike and celebrated an accomplishment that took six long years.

By the beginning of the Civil War, the eastern states had already built 31,000 miles of railroad track.  However, transporting people and goods west of the Missouri River was still done with animals.  As a result, the west had a much lower standard of living.  Political and business leaders envisioned tremendous benefits from linking both ends of the continent.

The biggest challenge, of course, was crossing California’s Sierra Nevada.  By 1862, a route had been planned, and work began the following year.  Progress was slow at first.  Labor was the problem.  Americans were fighting the Civil War in the east.  Out west, the huge silver strikes in Nevada diverted potential workers.  The Union Pacific turned to immigrants, Civil War veterans and ex-slaves, while the Central Pacific hired Chinese laborers.

Once work began in earnest, progress was even better than expected, leading to the May 1869 completion.

Here are just a few of the effects of the transcontinental railroad:

Is visiting this site something that everyone should want to do?  Probably not.  It’s not worthy of being a primary destination unless you’re a big rail fan or history buff.  It works as a day trip out of Salt Lake City or a side trip for road trippers on I-15 or I-84.

What you’ll find here is a visitor center designed to replicate a train station, complete with exhibits and helpful rangers.  Nearby is an engine house, with replicas of the Union Pacific’s “119” and the Central Pacific’s “Jupiter” – the locomotives selected for the golden spike ceremony in 1869.  The replicas were actually built for the National Park Service.  Not only are they fully operational; they’re drop-dead gorgeous.

There are also a couple of unpaved auto trails along the original route (for those who are really into this).  There are no train rides at Golden Spike, and kids are not allowed to climb on the replicas.

What you’ll enjoy most are the reenactment ceremonies and a chance to view the replica locomotives.  Be sure to check the historic site’s website for the latest reenactment schedule.  The website is at www.nps.gov/gosp.

Currently, reenactments of the golden spike ceremony are held at 11 and 1 on Saturdays and holidays early May to mid-September.  The engine house is generally accessible most days year-round.

There are no facilities along the way.  Bring what you need.

Thanks for visiting Road Trips with Tom.  On Sunday, July 9, we’ll head to Bennington, Vermont, and see America’s only covered bridge museum.

This week’s road trip takes us to Fort Scott END_OF_DOCUMENT_TOKEN_TO_BE_REPLACED