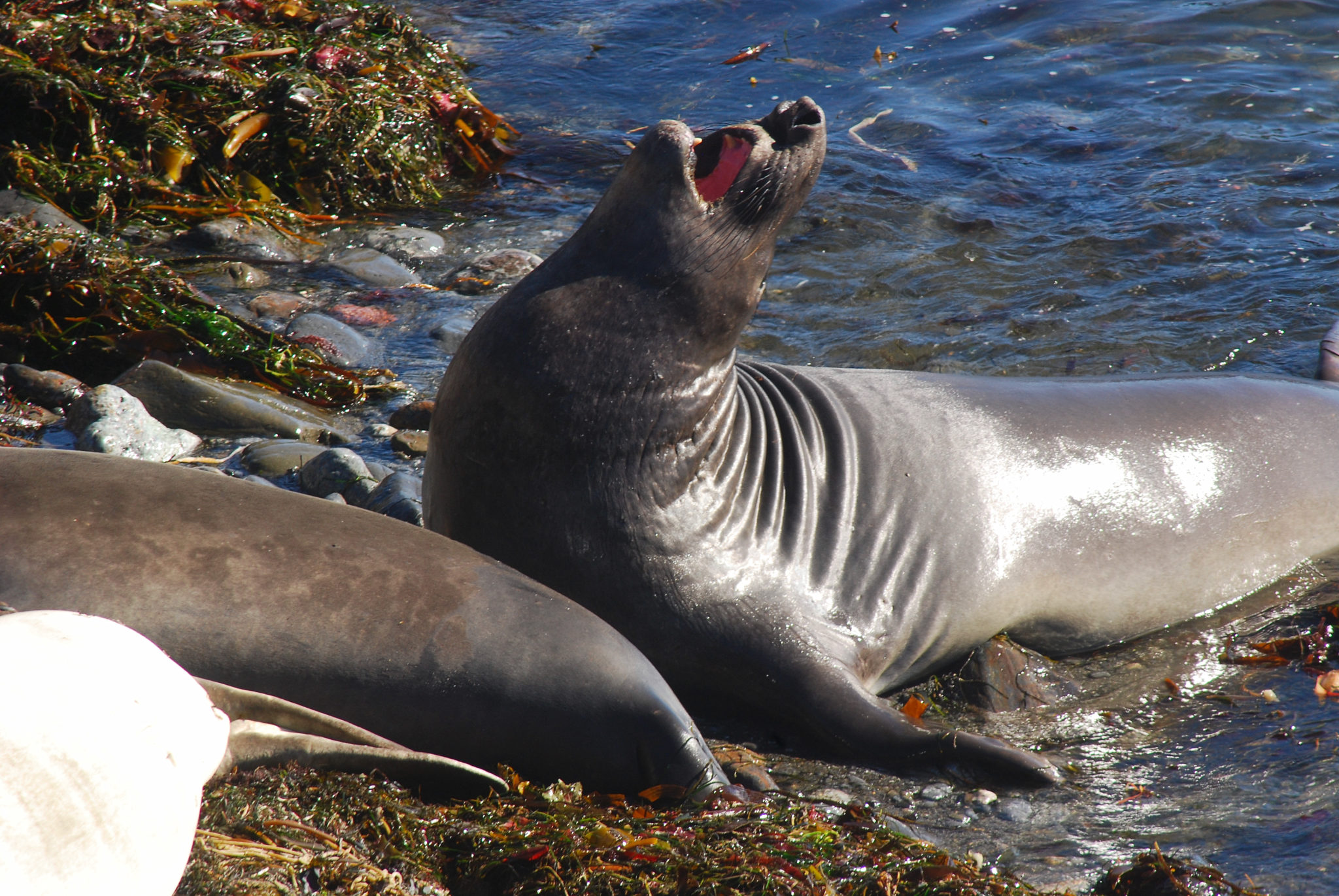 This week Road Trips with Tom heads to the central California coast for an unforgettable wildlife viewing opportunity.  Specifically, we’re visiting the Piedras Blancas elephant seal rookery – one of only three places on the U.S. mainland where you can observe and photograph these magnificent marine mammals.  If you’re interested in wildlife, this is a worthwhile road trip destination no matter where you live.

Piedras Blancas is fairly remote – at least a 4-5 hour haul from any of the state’s major metropolitan areas.  As a result, this isn’t a day trip.  Visiting the site will require at least a full weekend.  But there’s another big attraction:  Hearst Castle is just a few miles down the road, so you can easily combine the two destinations.   You’ll find plenty of accommodations less than 10 minutes away in San Simeon.  The nearest city of any size is San Luis Obispo, 56 miles to the south.

In this post, I’ll tell you a bit about elephant seals and when to visit Piedras Blancas.  The photo below gives you a good idea of what you’ll see there. A special feature is a link to a BBC YouTube video showing two huge males fighting for dominance and the right to mate.  Finally, I’ll go over the logistics of visiting the elephant seal rookery.

Does the alpha male get tired after impregnating 50 cows?

A good starting point for planning a Piedras Blancas visit is the website of the Friends of the Elephant Seal, which you’ll find at www.elephantseal.org . The site has lots of good information about the seals and what you can see during various seasons.  There’s even a web cam.

Elephant seals were hunted extensively for their blubber oil until nearing extinction by 1900.  Only a flipper-ful were left.  But they have since made a comeback and are no longer considered endangered.  Because they’re marine animals who migrate long distances, no one is really sure what their population is.  Best guess is about 200,000.

Northern elephant seals eat a variety of prey, including pelagic deep-water squid, pelagic crustaceans, sharks, rays, and other sea critters.  They live mostly at sea and only come ashore to breed, give birth and molt.  Only dominant males mate; an alpha male can impregnate as many as 50 cows in one season.

The chart below provides an overview of  the rookery’s seasonality.  Males return to the breeding ground between November and early January.    They typically engage in fights to determine who gets the harem.  To view the BBC video showing two males going at it, go to www.youtube.com/watch?v=bpb7Oks5kWI

What you see depends on when you come

Females show up afterward to give birth to the pups that were conceived the year before.  Pregnancy lasts 11 months, and each mother has only one pup. While on shore, males fast for three months.  Females fast for five weeks when they give birth and nurse.  Pups are left to fend for themselves 50 or so days after birth.

If you want to see the males fighting for dominance, I’d suggest mid-December to mid-January.  February and March are good for birthing and nursing.  Actually, you’ll usually find some elephant seals there just about any time.  Check the web cam to find out, or call Friends of the Elephant Seal at (805) 924-1628.  I’m writing this mid-morning on October 2, and the webcam shows about two dozen elephant seals in the camera’s field of vision.

Up to four tons

Elephant seals are BIG.  Males, which are two to three times larger than females, can reach 13 to 16 feet in length and weigh over 5,000 pounds, with the largest going up to 8,000 pounds.  That’s four tons, Bubba!  More than a Chevy Suburban.  The name “elephant” doesn’t come from their size.  Rather, it refers to the male elephant seal’s large trunk-like proboscis, which helps the animal make loud roaring noises, especially when competing for females.  Males look a bit like Jabba the Hut with a big nose. They’re somewhat ungainly on the beach but are agile, athletic swimmers.

Piedras Blancas is one of three U.S. mainland rookeries.  The other two are Ano Nuevo near Santa Cruz Bay and Pt. Reyes in Marin County.  At Ano Nuevo, the most popular site, the rookery is a state park.  Hours are restricted, and visitors must pay a $10 entrance fee, obtain a ticket, and hike 3-4 miles round trip to view the elephant seals.  At Point Reyes, there’s a shuttle bus, and visitors are restricted to 30 minutes’ viewing time.  You can visit Piedras Blancas any time during daylight hours.  Admission and parking are free.

Highway One north of Piedras Blancas closed until next June

Piedras Blancas is by far the easiest to visit, but it’s more remote from population centers than the other locations farther north.  These days, it’s even more remote than usual because coastal Highway One is closed near Big Sur following major flood damage earlier in the year.  It’s not expected to open until June 2018.

That means visitors coming from northern California must take US 101 to Paso Robles, turn west on SR 46, then mosey back north on SR 1.  From the south, take 101 to San Luis Obispo, then SR 1 56 miles to the site.  After your visit, you’ll need to return the way you came.  The good news about the road closure and the site’s remoteness is that it won’t get crowded this fall, winter and spring.  In fact, the upcoming winter season is likely to be the best ever for seal-viewing.

In San Simeon, which is near Hearst Castle, is the visitor center operated by the Friends of the Elephant Seal.  Hours can vary with the season, but for most of the year, the center is open 10-2 daily.  The main rookery is a few miles north of the Hearst Castle turnoff.  There’s more than one viewpoint.  Watch for signs.

Thanks for joining us this week.  Please come back on Monday, October 16, when we head to Everglades National Park in Florida.

This week’s road trip takes us to Fort Scott END_OF_DOCUMENT_TOKEN_TO_BE_REPLACED

You can run out of adjectives really fast when describing END_OF_DOCUMENT_TOKEN_TO_BE_REPLACED