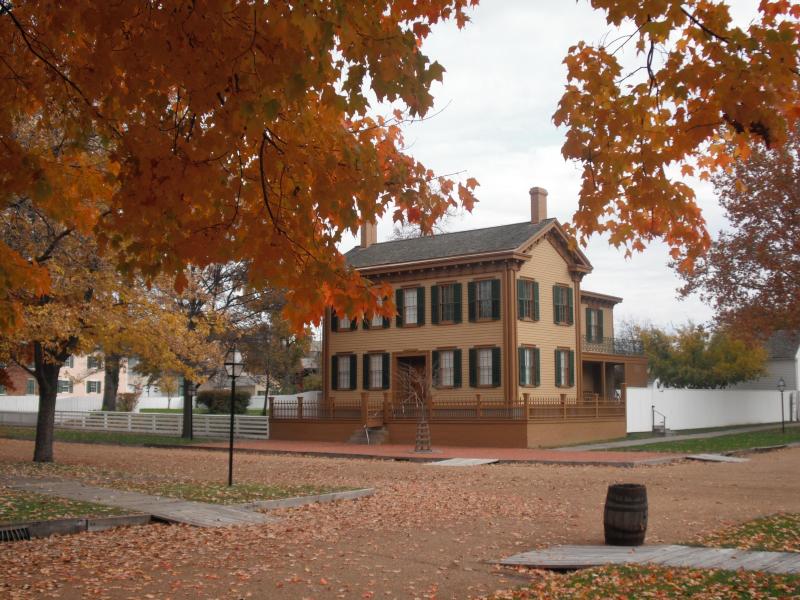 This week we at Road Trips with Tom tear ourselves away from California’s redwood forests and head to Lincoln Home National Historic Site in Springfield, Illinois. Our featured photo is courtesy of the National Park Service.

This is the only home ever owned by the man widely considered to be the greatest U.S. President.  Like Lincoln himself, the house is substantial yet modest – a two-story frame structure at the corner of 8th and Jackson Sts.  It’s part of a four-block residential neighborhood set aside by the National Park Service to honor our 16th President.  In doing so, it gives you a nice picture of how upper middle-class people lived in the mid-19th century.  And yes, they had outdoor privies.

In this post, I’ll give you details on what to see and do, then offer information on other Lincoln attractions in the area.

The biggest attraction is the free tour of the Lincoln home.  The tour is free, but you’ll need tickets, which are available on a first-come, first-served basis at the park’s visitor center.  The tour lasts about 25 minutes and is limited to 15 people per tour.  On busy days, you might encounter a wait until the next available tour time, so it’s advisable to get there early.  Annual visitation is only 239,000 (2016), but it’s concentrated in the summer.  Lots of school groups visit Lincoln’s house as well.

You can’t miss it!

Springfield, Illinois’ capital, is a likable Midwestern city connected by Interstate 55 to Chicago and St. Louis.  The terrain is fairly level, and the city is laid out in a grid pattern.  It’s near the center of the state, but in baseball season, you’ll find more Cardinals fans here than Cubs fans.  The city’s affinity with all things Lincoln is strong.  Back in the 1980s, when I worked at Toastmasters International, I attended a regional conference here.  As the representative of the headquarters staff, I sat at the head table.  My dining companion was Abraham Lincoln.  Not really, but this gentleman’s full-time job was to portray Lincoln at various events in the area.  He certainly looked the part — tall, lanky and a bit homely.

If you’re road-tripping on I-55 between Chicago and St. Louis, a two-hour visit is sufficient for checking out the visitor center, taking the tour of the home, and strolling through the neighborhood.  However, if you’re a true Abe-o-phile, you’ll want to spend the night in Springfield and allow a full day. Springfield offers a wide array of lodging and dining choices.

To get there, take I-55 to Exit 96B, then head west.  Turn left on 7th St. and follow the you-can’t-miss-it signage to the national historic site parking lot.  Admission may be free, but you’ll have to pony up $2 per hour to park Old Betsy.

Abraham Lincoln was born in Kentucky in 1809, spent some time as a youngster in southern Indiana, then moved to the fledgling settlement of New Salem, Illinois, in 1831.  He had little formal education, but was a voracious reader and learner.

Lincoln was also interested in politics and ran for the state legislature in 1834.  He lost.  Two years later, he ran again, and won.  He served four terms, then left to concentrate on his law practice.  During that time, he moved to Springfield and married Mary Todd.  She came from a prosperous background, and her family thought she was marrying beneath her station.

The Lincolns bought the frame house on 8th St. in 1944 for $1,200 and a small piece of land.  There they lived for 17 years, with Lincoln being a husband, father, neighbor and politician.  This was his base when he ran against Stephen Douglas for the U.S. Senate and lost, then ran for President and won.  In 1861, after winning the Presidential election, the Lincolns moved to Washington.

The national historic site visitor center is open daily from 8:30 to 5.  In addition to exhibits and tour tickets, it offers three videos, which are shown on a rotating basis.  Tours run from 9 to 5 – last tour starts at 4:30.

In this section, I’ve provided several links.  Some worked when tested, but aren’t functioning properly now.  You may have to paste the URL into your browser or search on Google.  Sorry for the inconvenience.

The surrounding neighborhood has 12 restored houses.  Two are open for self-guided tours.  For a virtual tour of the neighborhood, go to www.nps.gov/liho/lincoln-neighborhood

Here are a couple of other links that might interest you.  For a virtual tour of the Lincoln home, go to the park’s website – www.nps.gov/liho.  From the landing page, click on the tour link, then scroll to the bottom to find the link to the virtual tour.

For  a variety of YouTube videos, go to  www.youtube.com/channel/UCGYWETpnJkTYQB_y_pUHvPg

The YouTube video of Mr. Lincoln’s bedroom also links to other videos.  Go to www.youtube.com/watch?v=eg1g7lmqafc

There are three other Lincoln-related attractions in and near Springfield that might interest you.  All are well-signed and easy to find.  First is the Abraham Lincoln Presidential Library and Museum on North 6th St.  Open 9-5 daily, admission $15 for adults, $12 for seniors and $6 for ages 5-15.  The parking lot is metered.  The guest comments I read raved about the museum’s interactive exhibits and the high degree of technical sophistication (including a holographic video).  Go to www.lincolnlibraryandmuseum.com

Next is Lincoln’s Tomb on the north side of town.  Follow signs to get there, or go to www.lincolntomb.org/tomb

If you hit all these attractions, you should qualify for the Order of the Stovepipe Hat!

Thanks for reading.  Next week, it’s back to California for an exciting wildlife viewing opportunity.  I’ll show you how to observe and photograph northern elephant seals in the wild.

This week’s road trip takes us to Fort Scott END_OF_DOCUMENT_TOKEN_TO_BE_REPLACED

You can run out of adjectives really fast when describing END_OF_DOCUMENT_TOKEN_TO_BE_REPLACED