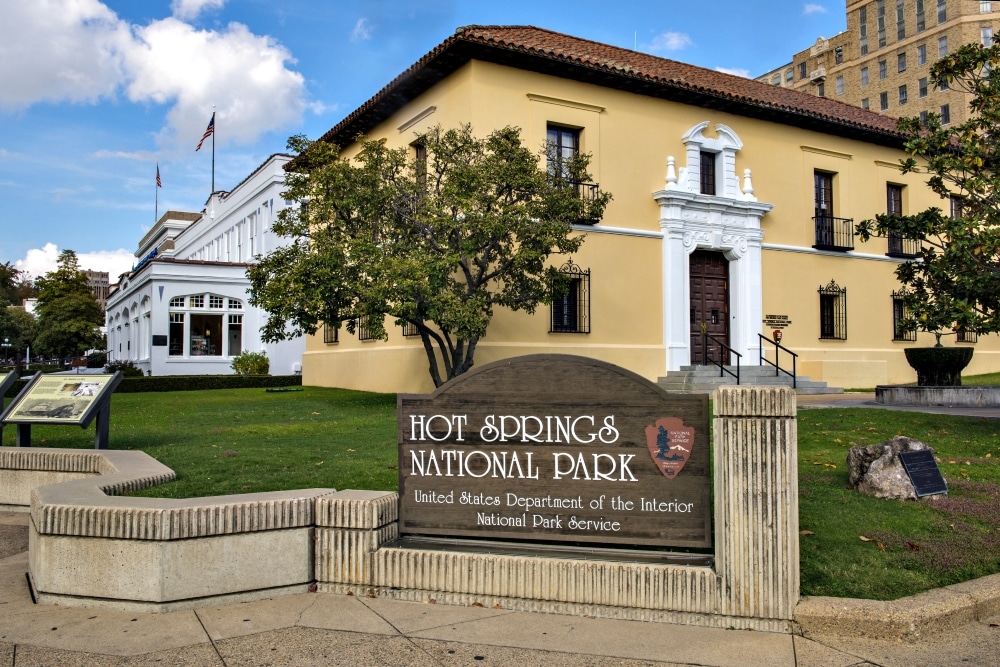 This week we’re headed to Hot Springs National Park in Arkansas.  This is the nation’s smallest national park, but it offers lots to do and plenty to see.

For over two centuries, travelers have come to this spot at the edge of the Ouachita Mountains to bathe in the thermal waters that spill forth on Hot Springs Mountain just north of the city of Hot Springs.

Hot Springs isn’t on the way to anywhere, unless you’re road-tripping on Interstate 30 between Dallas and Little Rock.  There aren’t any major metropolitan areas nearby.  Yet this is a very popular park.  Over 1 ½ million people visited it last year.

The main attraction is the water.  Here 700,000 gallons of water flow daily from 47 springs at a temperature of 143 degrees.  For over two centuries, travelers have come here to experience the waters, which they believed had healing powers.

Hot Springs is a unique park in several ways.  Most notably, it’s smack dab in the middle of a city of 36,000 people, and the city and park boundaries are virtually indistinguishable.  It’s interesting to stroll down Central Avenue, with downtown Hot Springs on one side, and historic Bathhouse Row on the other.

In this post, we’ll briefly look at the area’s fascinating history, then consider how you might spend your time while visiting Hot Springs National Park.  Most people will want to spend 1-1 ½ days here, but you can sample it in half a day.

Shortly after the area became U.S. territory in 1803 as part of the Louisiana Purchase, settlers arrived and quickly recognized the springs’ potential as a health resort.  By the 1830s, a rudimentary town sprang into existence.  Troughs were constructed to carry the water from the springs to the town, and several rustic bathhouses were built to serve visitors.

In 1832 the federal government named Hot Springs a federal reservation, in effect making it the first national park (although there was no National Park Service yet).  This kept the springs public.

However, private interests built and controlled the delivery system.  Thanks to a devastating fire in 1878, the rudimentary bathhouses were replaced by the impressive structures you see today as you stroll along Bathhouse Row.  A total of eight bathhouses were built, most during the early 20th century.  The troughs were replaced by a system of pipes that deliver the waters from the springs.

Fast forward to the turn of the 20th century.  Hot Springs became a hotbed for organized crime and a hangout for a who’s who of mobsters – Al Capone, Lucky Luciano, Bugsy Moran and the like.  It was a wide open town that ran on gambling, bootlegging, prostitution and so on.  In effect, Hot Springs operated largely outside the law and offered Las Vegas-style entertainment long before there was a Las Vegas.

The gangster era lasted until the 1960s, when the federal government cracked down on what it called “the largest illegal gambling operation in the United States.”

That spelled the end for the bathhouses, too.  From the 1960s to the ‘80s, seven of the eight closed. One, the Buckstaff, is still in business, and the beautiful Fordyce Bathhouse is now the national park visitor center. The  Lamar Bathhouse at the south end of the row is now the park’s gift shop.  Lastly, the Superior Bathhouse is now a brewery using the Hot Springs water in its beer.

So what’s there to see and do these days?  For one thing, you have a choice of two bathhouses where you can experience the thermal waters.  Up on the nearby mountain, you’ll find a campground, some nice nature trails, scenic viewpoints and the Mountain Tower.

I recommend you begin at the visitor center in the opulent Fordyce Bathhouse.  It houses a museum and other exhibits.  Ask a ranger about other options to best utilize your time here, including the hiking trails.  Two guided tours are offered – a tour of the Fordyce Bathhouse (don’t miss this!) and a walking tour of the Promenade that runs along Bathhouse Row.

You’ll notice steaming fountains at a couple of locations.  You’re welcome to drink this water and even fill a jug to take home.

How about a bath?  After all, experiencing the waters is what this national park is all about.  You have two choices:

The Buckstaff  Bathhouse, a park concessioner for over 100 years, offers a traditional bath experience, with individual tubs patterned after old-time European spas.  For a description and prices, go to www.buckstaffbaths.com. This site wasn’t operational the day I prepared this copy.  You can call them at (501) 623-2308.

Hot Springs National Park is most easily reached from I-30.  Coming westbound from Little Rock, take Exit 111 to US 70, or if you’re eastbound, take Exit 98 onto US 270.  The route to the park is well-signed and easy to follow.  You’ll have to hunt for parking near Bathhouse Row, and you’ll probably have to shell out a couple of bucks to stable Old Betsy.

Accommodations are plentiful in Hot Springs.  If you’re camping, follow the signs to the Gulpha Gorge Campground.  Sites have water and hookups, but no showers.  The cost is $30 per night, and availability is first-come, first-served.  The park gets quite crowded in summer, and the campground will fill up early.

Thanks for joining me today.  Please come back on Monday, November 13, when we visit historic Rancho Los Cerritos in Long Beach, California.

PHOTO CREDIT:  The featured photo at top is from Arkansas Tourism.

This week’s road trip takes us to Fort Scott END_OF_DOCUMENT_TOKEN_TO_BE_REPLACED