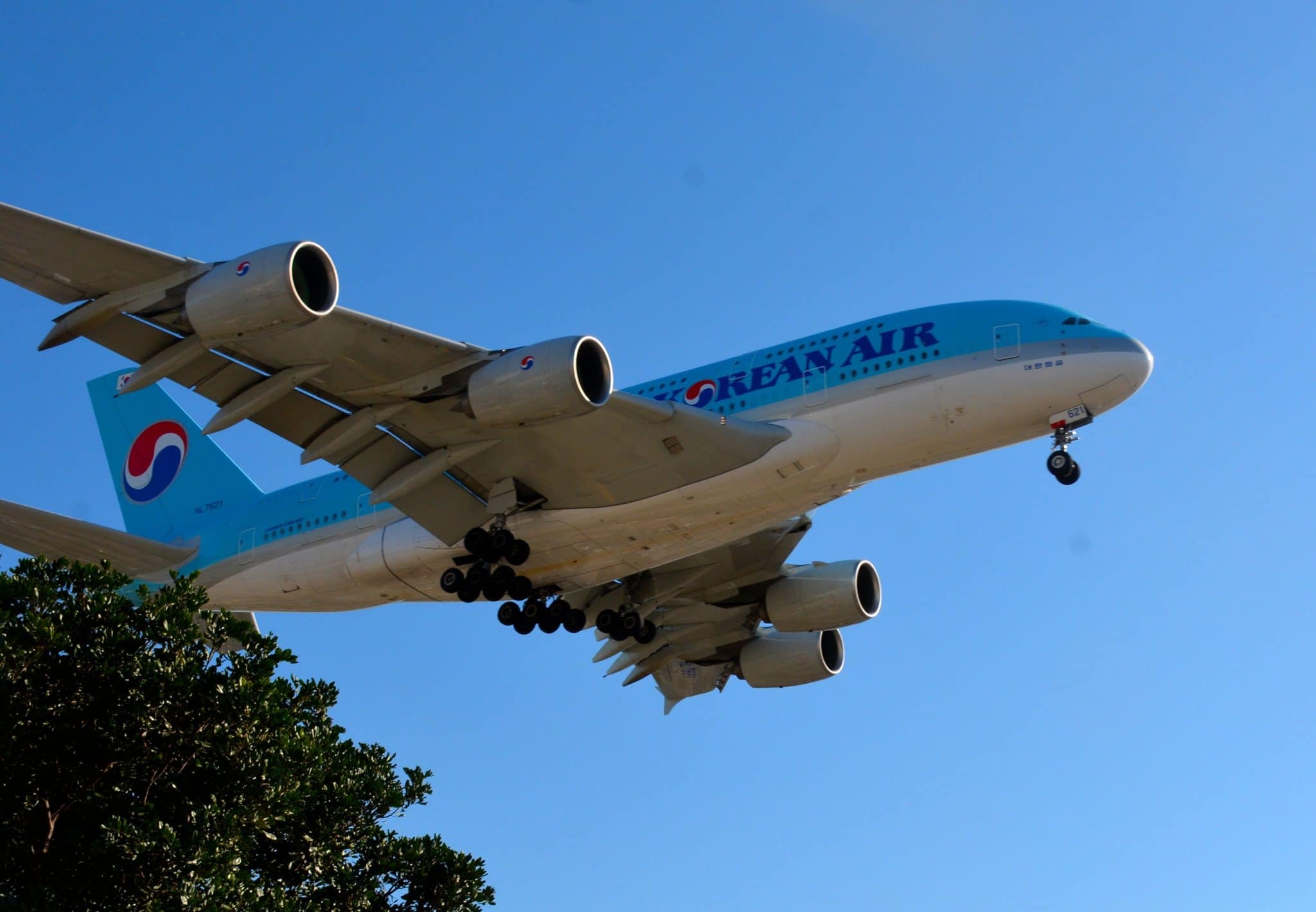 This week we’re not only shifting gears – we’re shifting our focus from driving to air travel, as we go planespotting at Los Angeles International Airport. Planespotting is popular, although nobody keeps track of how popular.  My own observation is that both adults and kids enjoy it   If you’re interested in transportation, you’ll like this, too.

Let me set this up for you.  You’re standing in a grassy plot on Sepulveda Blvd. near LAX, munching on a Double-Double from the LA area’s busiest In-N-Out Burger stand.  Every few minutes, a small commercial jet – a Boeing 737, Airbus 320, Embraer 175 or something similar whizzes by and settles on the runway.

Pretty cool, but that’s not why you’re here.

Suddenly, however, everyone’s heads turn to the east.  In the middle distance, wings dipping and swaying, is an airborne monster as tall as an eight-story building.  Gradually, you begin to hear the roar of its four engines.  Before you know it, the craft is right there in front of you in an awesome display of power.  Its sheer size displaces the air around it, creating wind.  Then, a minute later, it’s on the runway, rolling away and leaving you with a rapid heartbeat and a sheepish grin.

What a rush!  Now that’s why you’re here.

This is the Airbus A380 – biggest commercial jet in the sky.  It’s 79 feet high, 261 feet wide,  double-decked throughout, and able to carry over 500 passengers.  The A380 is mostly used on international routes.  Carriers that fly it into LAX include Air France, Asiana,  British Airways, China Southern, Emirates, Korean, Lufthansa, Qantas and Singapore.  Nearly all the landings are on Runway 24R, right in front of the In-N-Out Burger.

For a quick preview, watch one or two of the landings in this YouTube video”  www.youtube.com/watch?v=xW7WmEmFfRA

Getting that rush is one of the benefits of LAX planespotting.  The other is gaining an overview of operations at one of the world’s major airports.  For these benefits, you have to go to two separate spots, but they aren’t far apart.

We’ll start with the overview, then come back afterward for our burger and thrill at In-N-Out.

LAX planespotting is a weekend activity.  What you see isn’t any different on the weekend, but what you don’t see is –mind-numbing traffic.  I recommend you visit two spotting spots – Cutter Park in El Segundo for the operations overview, then In-N-Out for the 380 rush.

Plan on arriving at El Segundo’s Cutter Park between 9 and 10 a.m. , then moving to the In-N-Out Burger on LAX’s north side about 11.

Below are separate sections on Cutter Hill and In-N-Out with details on directions, parking and facilities.

This hillside park offers an elevated location with a relatively unobstructed view of LAX’s south side.  That includes Terminals 4, 5, 6, 7 and 8, plus the Tom Bradley International Terminal. The Santa Monica Mountains are in the background, and on clear days, downtown LA and Mt. Baldy are visible.

From here, you can observe the full play of a major airport – takeoffs, landings, gate pullbacks, runway taxis, ground vehicles and the like.  You’ll want binoculars here.  You get an especially nice view of takeoffs.

Here’s a YouTube video with random views from Cutter Hill.  (Just watch as much as you want – there’s no narration or story to it:)  www.youtube.com/watch?v=UYow9qjILiE

To get there, take I-105 west from 1-405, continue past the Sepulveda exit, then take the first left turn.  Follow the ramp up the slope, then turn right onto West Imperial Ave.  Continue until you reach the row of tables and benches, then start looking for a parking space.  Everything is free here, but there are no other facilities – no restrooms or water.

The In-N-Out Burger is at the corner of Sepulveda and Lincoln Blvds., literally right across from the runway where the world’s biggest commercial aircraft land.  This is where you get the big rush.

This grassy plot next to In-N-Out Burger is the nation’s most famous and popular planespotting location.  Brett Snyder, respected author of the Cranky Flier blog, last month hosted his annual “Dorkfest” planespotting event there, and people actually flew in to hang out with Snyder and watch airplanes.  FYI:  Check out http://crankyflier.com/

If you’re going directly there from the 105, exit Sepulveda, drive north through the tunnel and past the airport entrance.  Turn left onto Westchester Parkway, then take the first left past the Parking Spot entrance.  As the street curves around, you’ll see the In-N-Out on your left.  Find street parking, buy food, then return to the park to await the planes,

From Cutter Hill, go west on Imperial Highway to the first signal, turn right, then turn right again onto Westchester Parkway.  From that intersection, follow the directions in the previous paragraph.

Facilities:  The only facilities are at In-N-Out Burger.  Buy your lunch there, and you can use them guilt-free.  Warning:  This is a very busy In-N-Out, and there are usually long lines for the restrooms.

To enhance your experience, it would be great to know when the big A380s are due to land.  This requires you to spend some time on various commercial aviation sites.  A tool I’ve found especially helpful is a free phone app called Flight Radar 24.  With this app, you can easily find the airline, aircraft type, flight number, origin/destination, air speed, position and ETA for any commercial flight within 40 miles or so.

Thanks for joining me.  Next week’s destination will be Hot Springs National Park in Arkansas.  Posting date is Monday, November 6.

This week’s road trip takes us to Fort Scott END_OF_DOCUMENT_TOKEN_TO_BE_REPLACED

You can run out of adjectives really fast when describing END_OF_DOCUMENT_TOKEN_TO_BE_REPLACED