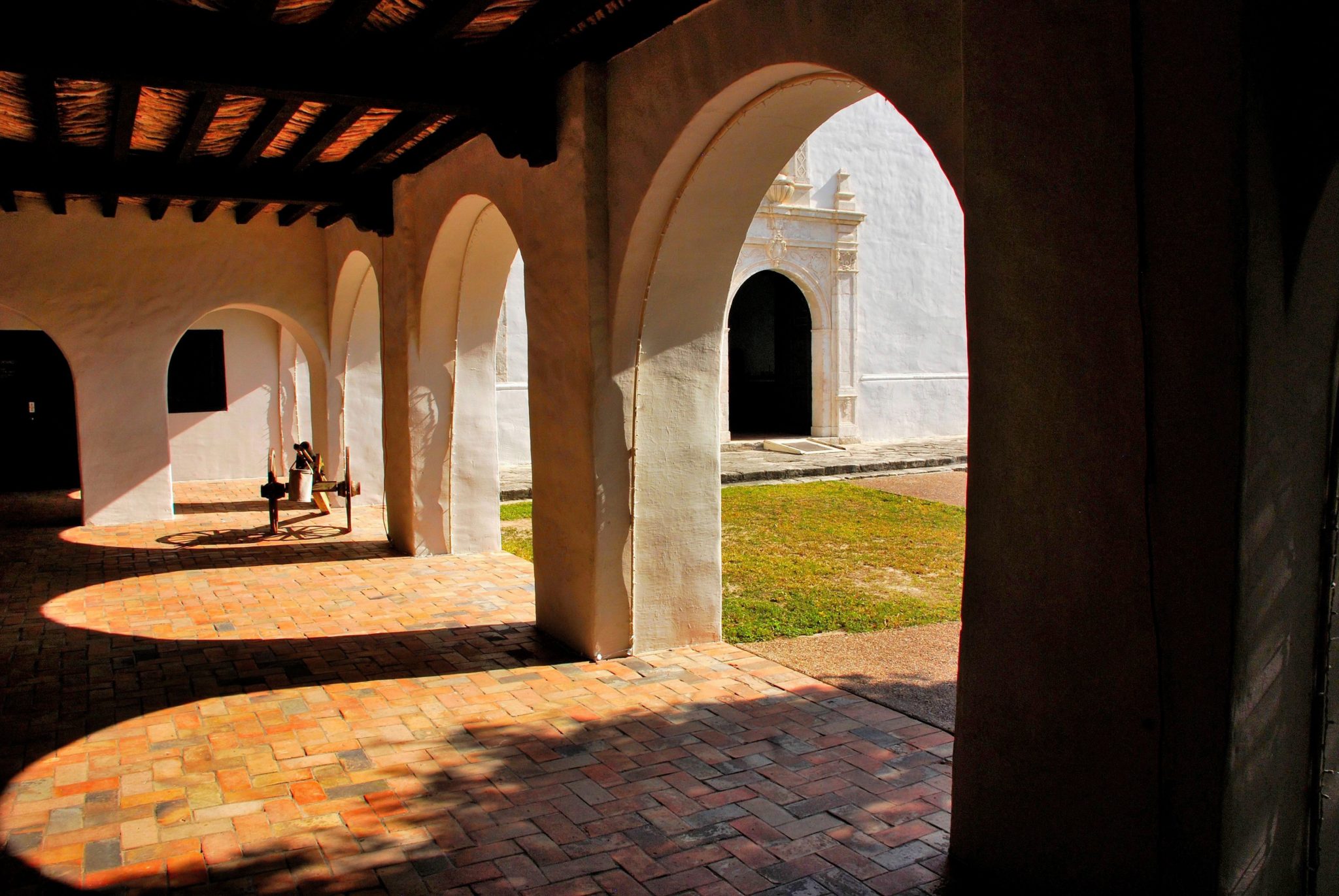 Our destination this week is the tiny South Texas town of Goliad.  You may have never heard of the place if you’re not from Texas.  To Texans, however, Goliad ranks up there with the Alamo, San Jacinto Battlefield and ZZ Top as a Lone Star State icon.

There are three facets to Goliad:  The longest-lived mission in Texas, the oldest military fort in the western United States, and a traditional Texas cowtown with a Victorian downtown and an ornate courthouse.  Two to three hours are enough to do the place justice.

Using the intersection of US Highways 59 and 183 as your dart point (start or stop of a mileage entry on a map), drive just south on 183 to Goliad State Park.  That’s where you’ll find the graceful old mission of Espiritu Santo.  Continue south another tick or two, and you’ll come to Presidio La Bahia on the left.  Goliad’s courthouse square is just west of the dart point via US 59.

The sword and the cross

The mission and presidio were moved here from another location nearer the Gulf in 1749.  This was the far northern frontier of Spanish territory at that time, and the Spaniards were anxious to secure and expand their holdings.  In keeping with Spain’s usual strategy, the sword and the cross worked together.  The military secured the territory, and the friars secured the souls.

We’ll start with the mission, then head over to the presidio.  Each has its own hours and admission.  I know, it sounds silly.  What’s even sillier is that the church is owned by the State of Texas, while the Catholic diocese owns the former military base.

The mission helped develop Goliad as a ranching center, having amassed a herd of 40,000 cattle at its peak.  As a result, Goliad became an important crossroads.  Mission Espiritu Santo was secularized following the Mexican Revolution in the 1820s.

I enjoyed walking around the complex.  The mission really is graceful.  Some rooms are open and contain period furnishings.

Now, for Presidio La Bahia, which was built to protect the mission.  It had a busy life and was considered the most fought-over fort in U.S. history.  In 1835 it was captured by the “Republic of Texas.”  A few months later, the Mexican Army re-took the fort and massacred the usurpers, who were led by Col. James Fannin.

The presidio is open 9-4:45 daily; admission is $4.  In the main building are historical displays that include implements used here.   Nearby is the chapel.  Like the rest of the presidio, it’s been restored to its 1836 appearance.

I also have a YouTube video on the presidio.  Check it out at www.youtube.com/watch?v=rEtoWff_HOk

One last fact about Goliad:  In 1829, it was the birthplace of Ignacio Zaragosa, who became a legendary Mexican army general when he defeated Napoleon III’s French army at Puebla on May 5, 1862.  The victory became famous for its date – Cinco de Mayo.

In the town of Goliad (pop. 1900), you can find a steak, some barbecue and a cold beer.  There are a couple of motels, but I think you’d prefer the La Quinta or Holiday Inn Express down US 59 in Beeville.  Ah, Beeville.  In 2013 I spent four days in the hospital there.  But that’s another story.  Join me next week when we do some planespotting at LAX.

Welcome to Benefit Street – the most impressive neighborhood of END_OF_DOCUMENT_TOKEN_TO_BE_REPLACED

This week, Road Trips with Tom steams down the mighty END_OF_DOCUMENT_TOKEN_TO_BE_REPLACED