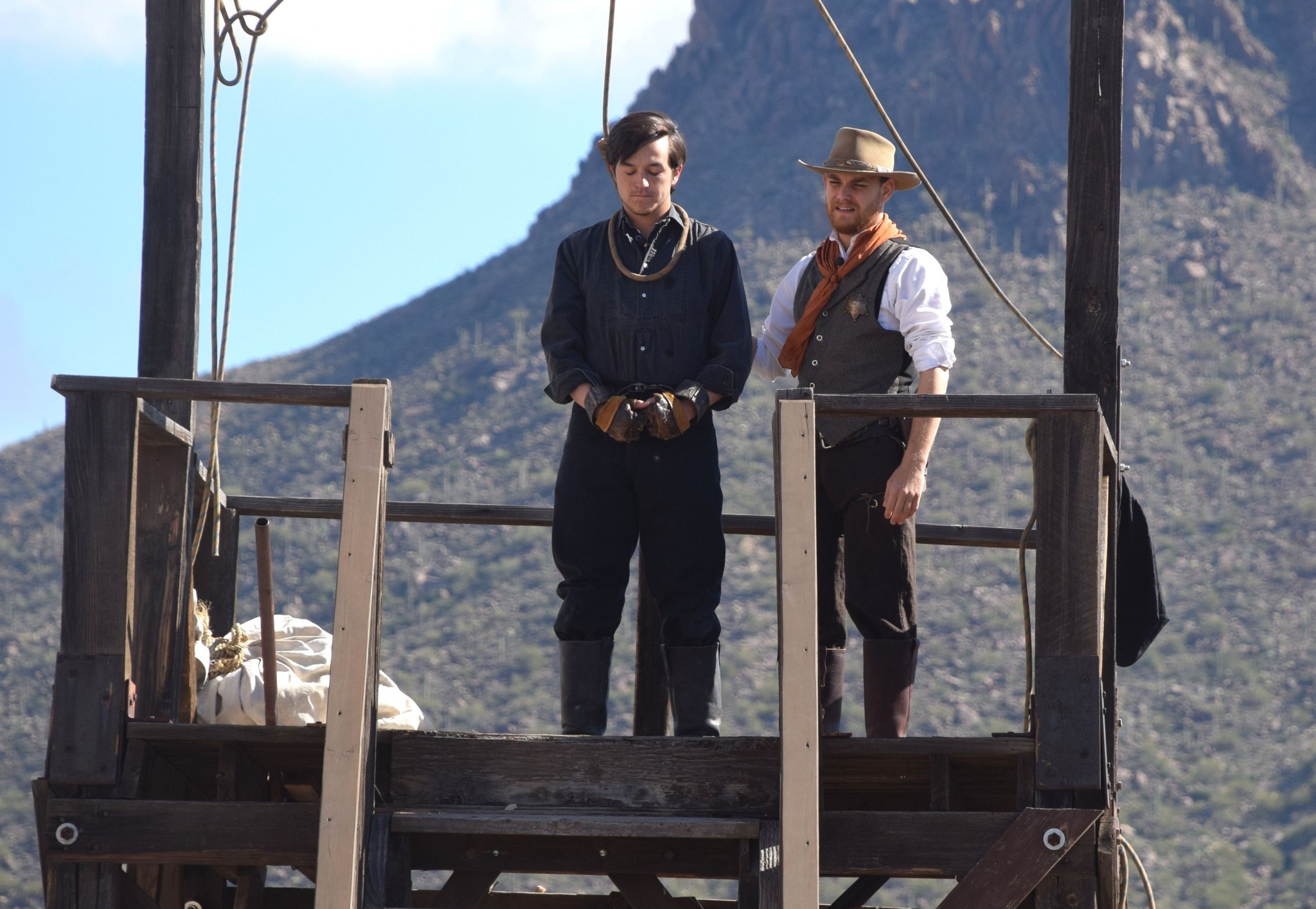 This week, Road Trips with Tom invites you to mosey on over to your computer, sit for a spell, and read about the rip-roaringest Old West experience you can have.

You’ll find it at Old Tucson Studios in Arizona — a great place for a winter or spring road trip.  You might just want to fire up Old Betsy or your favorite airline and head for this authentic Western movie set and theme park in the desert west of Tucson.  Of course, you’ve probably seen Old Tucson many times if you’ve seen some of Hollywood’s classic Westerns.

Here, you can stroll the streets that have been trod by such stars as John Wayne, Glenn Ford, Randolph Scott, James Stewart, Ronald Reagan and many others.  Many of the sets built for these films are still standing and are now used as venues for Western-theme shows, including mock gunfights and stunt demonstrations.

A great thing about Old Tucson is its proximity to other major attractions.  It’s literally just down the road from the marvelous Arizona-Sonora Desert Museum and the Tucson Mountain District of Saguaro National Park.  You’ll want to visit all three, but there’s too much to see in a single day.  Plan on at least two full days.  If you have kids, bring them — they’ll love Old Tucson!

Old Tucson is only a half-hour drive from downtown Tucson, but it’s a world apart.  You cross a range of low mountains to get there, and the attraction is surrounded by desert parkland, complete with stately saguaro cacti.  This gives the Old West movie set an aura of authenticity unmatched anywhere.

To get to Old Tucson, exit I-10 at Speedway Blvd. (Exit 257) and head west.  Speedway becomes Gates Pass Road.  Directional signs will lead you to Old Tucson, as well as the desert museum and national park.  If you’re driving an RV or towing a vehicle, you should avoid narrow, winding Gates Pass Road.  Instead, take I-19 to Ajo Way (Exit 99) and follow it west a few miles to Kinney Road.  Turn right there; Kinney Road leads directly to Old Tucson.  You’ll find plenty of free parking.

I visited Old Tucson in mid-January and wound up spending most of a day there.  It was only a 30-minute drive from my hotel near the Tucson airport, so I was at the gate when the park opened at 10.  A look at the license plates on the other vehicles in the lot indicated that Tucson is a popular destination for people escaping the brutal winter in the upper Midwest.  Winter and spring are the busiest seasons here.  You don’t want to come in summer.

I joined the first guided tour at 10:15, which is a great way to start the visit.  Our guide, Theresa, was decked out in a ten-gallon hat, kerchief, boots and shootin’ iron.  She was a walking encyclopedia of Old Tucson’s film history and pointed out the various shooting locations.

Before the tour, I asked her if she liked her job.  She said, “Oh, yeah.  Where else can you get dressed up like this, act all crazy . . . and get paid for it?”

Old Tucson has a very good web site that’s worth checking out before you leave home.  Go to www.oldtucson.com.  There, you’ll find details on the park’s operating calendar, as well as a map and show schedule.  You’ll also find several videos that give you a preview of what you’ll experience when you get to Old Tucson Studios, as well as a list of the movies and TV shows filmed there.

The show schedule is your day planner.  After my tour, I attended the medicine show, a musical revue, a reenactment of a movie called The Hanged Man (see the featured image at the top of this post), and the cook wagon presentation.  Between shows, I wandered the streets, looked at lots of exhibits, visited the Old Tucson Story museum, went for a train ride, and had a surprisingly good lunch at Jake’s Barbecue.  There were still more shows on the schedule when I left at about 3:30, but I wanted to catch the late afternoon light at the national park down the road.

The Duke was here

A few of the TV shows filmed here were Tombstone, Gunsmoke, High Chaparral and Little House on the Prairie.

Unfortunately, a devastating fire in 1995 destroyed Old Tucson’s sound stage and many of its buildings.  The park wasn’t reopened until 1997. Since then, it’s  focused on being an Old West theme park and site for corporate events.  According to Theresa, literally hundreds of weddings are held there every year.

Old Tucson’s schedule varies with the season.  Winter and spring are the busiest times, and the park is open 10-5 daily.  In May and June, it’s open Friday-Sunday, and in summer it’s open on weekends only.  If you’re planning a visit, check the operating calendar on Old Tucson’s web site.

Admission is $18.95 for ages 12 and over, and $10.95 for kids 4-11.  The show schedule varies; again, check the web site for details.  Admission includes all shows, the guided tour, train rides and the carousel.  Extra-cost attractions are gold panning, stagecoach rides, trail rides and the shooting gallery.

There are several shops, although nothing especially unique or impressive.  You’ll find a few choices for food, plenty of restrooms and lots of benches when you need a rest from walking.

You’ll also find a plethora of accommodations in Tucson.  A public campground is just north on Kinney Road.

That’s our post for the week.  Thanks for hangin’ your hat here at Road Trips with Tom.

Please join us Sunday, February 5, as we motor to the Blue Ridge Mountains of Virginia and visit Shenandoah National Park.

This week’s road trip takes us to Fort Scott END_OF_DOCUMENT_TOKEN_TO_BE_REPLACED