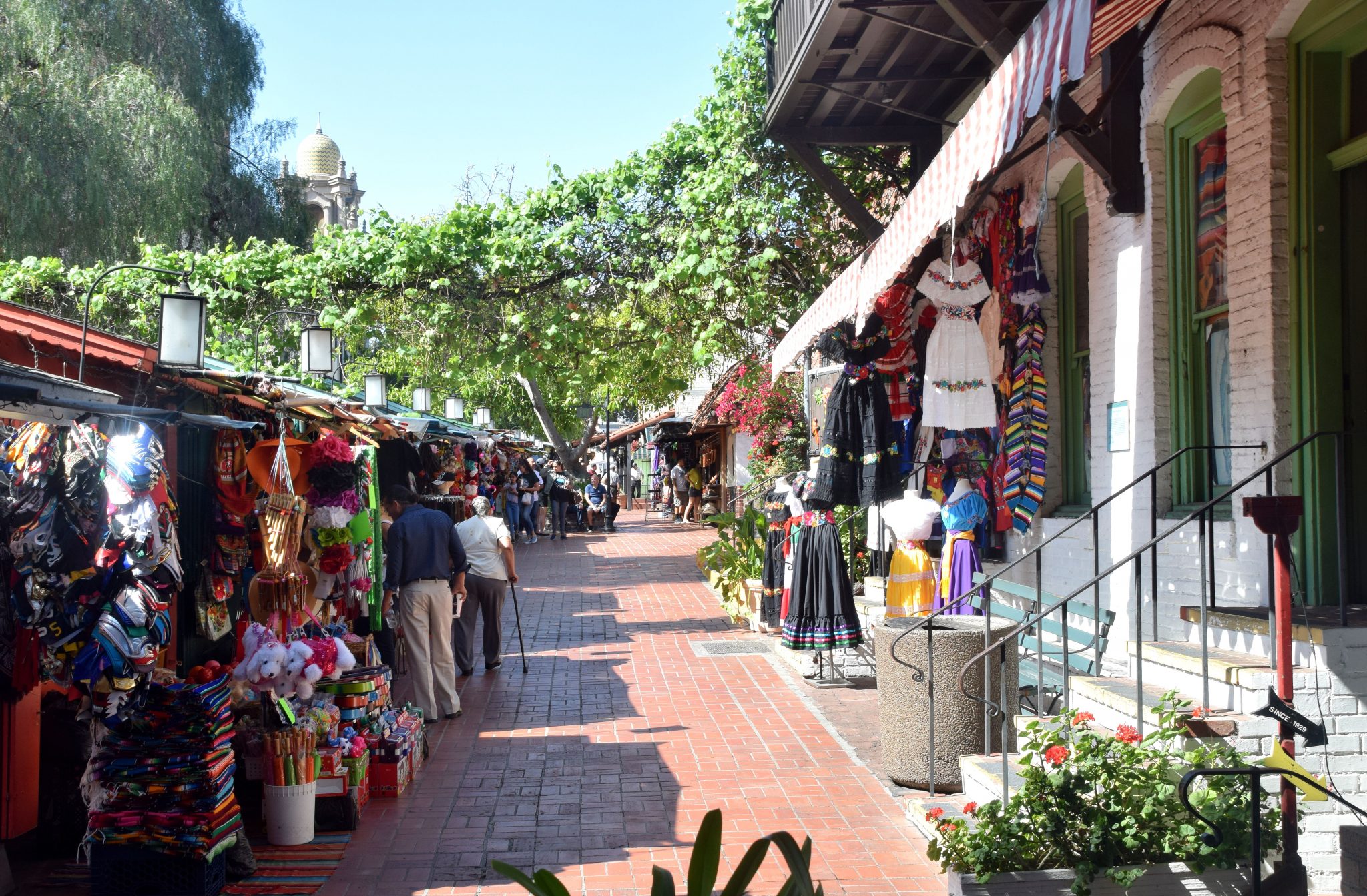 This week, Road Trips with Tom hops on the freeway and heads to the historic heart of Los Angeles – Olvera St.  Or, as it’s officially known, El Pueblo de Los Angeles Historic Monument.

Historic?  Los Angeles?  Sure, why not?

You don’t morph from a rural backwater village of 650 settlers into a world class city of over 4 million in less than 200 years without a lot of history.  For one thing, two other flags flew in El Pueblo’s plaza before the Stars and Stripes were hoisted in the mid-1800s.  Our history is just more compressed than that of most other Western Hemisphere cities.

I’ll give you a brief overview our history in a few paragraphs.  (I’m using the word “our” since I’m a native and lifelong resident of Los Angeles County.)

It’s junk, but the price is right

I’ve been to Olvera St. many times, but my visit in mid-April was my first in at least 25 years.  And you know what?  It’s hardly changed.

There’s the plaza with its fountain, a big church, and narrow, block-long, cobblestone Olvera St. running north.  The street is still lined with shops and stalls called puestas full of colorful, Mexican-flavored merchandise.  There are several open-air and indoor cafes, full of atmosphere but not known for their cuisine.

It’s tacky, but it’s also fun, and the vibe is upbeat.  El Pueblo draws large crowds on weekends — a mix of local, mostly Latino families and out-of-town tourists.  That’s when you want to come – Olvera St. puts its best face on for a big crowd.  Even when the place is hopping, you can move around fairly easily – but watch for strollers!  Shopping is easy, because most of the shops and puestas carry the same stuff.  Another advantage of a weekend visit; parking is easier and less expensive.

As you’d expect, most of the souvenirs are junk.  But prices are reasonable.  You’ll find better quality at Old Town San Diego.  But look closely:  Among the kitsch on Olvera St. are some high-end goods imported from Mexico. 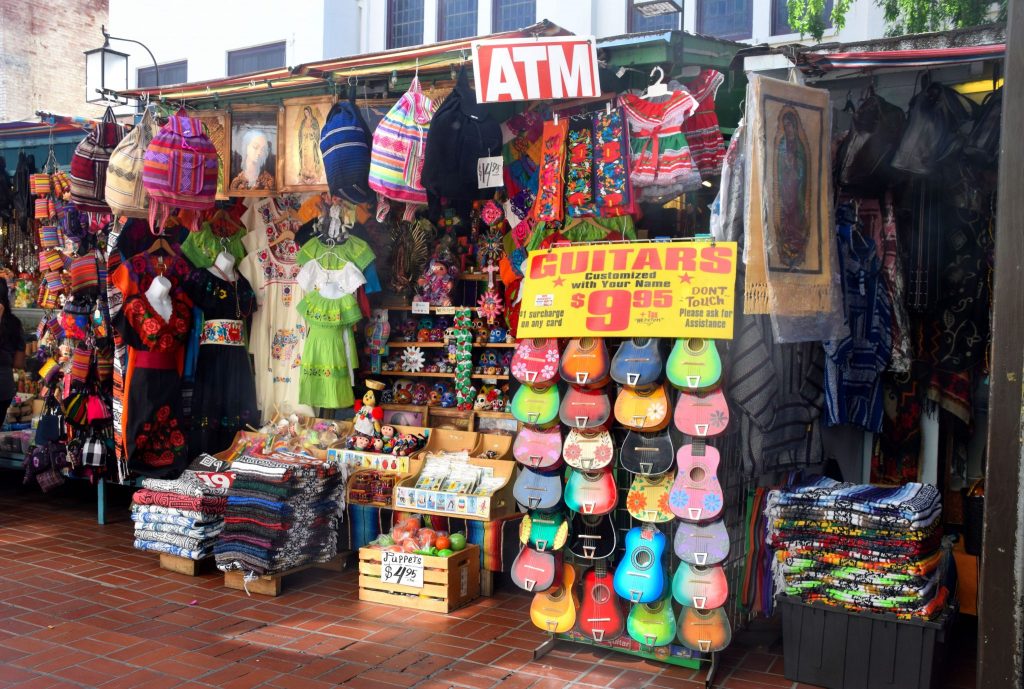 You can get these same guitars, serapes, masks and handbags at any of a dozen puestas on Olvera St.  (I bet you’ll buy some of these souvenirs.)

Let’s press the rewind button and hit the historical highlights.  We’ll start in 1777, the year after the United States declared its independence.  Only eight years earlier, Spain established the first European settlement of what is now California in San Diego.  From there, Don Gaspar de Portola headed north, looking for good sites for settlement.  The first pueblo was founded in San Jose.

In 1777, Governor Felipe de Neve was ordered to establish another pueblo on the Los Angeles River, not far from the newly founded San Gabriel Mission.  Farmers and their families were recruited from northern Mexico.  From the beginning, the new pueblo was designed to be the hub of an agricultural region, and the village was carefully planned and laid out.

Fast forward to 1821.  Mexico earned its independence from Spain, and Los Angeles was the largest settlement of Alta California, with a population of 650.  Large cattle ranches were established via land grants to families whose names now appear on such street signs as Sepulveda, Olvera and Pico.

The United States forcibly annexed California in 1848, the year before the height of the great Gold Rush.  California became a state in 1850.

After the takeover, L.A.’s core moved south a mile or two.  From the plaza, you can see the Civic Center across the busy 101 freeway.  This mirrored what happened in San Diego.  In both cities, the historic core avoided destruction by being more or less abandoned until a push for restoration occurred.

If you’re interested in a more detailed history, you’ll find a good one on Wikipedia; go to https://en.wikipedia.org/wiki/History_of_Los_Angeles.  For details on El Pueblo de Los Angeles Historic Monument, go to elpueblo.lacity.org/.  (Oops, I couldn’t get this link to go “live,” so you’ll have to paste it in your browser.  Sorry for the inconvenience.)

Shopping and eating aren’t the only attractions.  There are also a few historic buildings described in the El Pueblo website.  The best, and the one I recommend as a must-see, is the Avila Adobe.  Built in 1818, this is L.A.’s oldest house.  It’s been nicely restored and furnished with period pieces; a few are original, while the rest are replicas.  It’s a great chance to view the lifestyle of a wealthy landowner and his family.  You can tour the house for free, and there’s a docent on hand to answer questions.  Open 9-5 daily.

Take the train to Olvera St.?

Olvera St. is best reached from the US 101 freeway.  From northbound 101, take Exit 2B for Alameda St. and continue on frontage road to Main St.  Turn right; you’ll find parking lots on your left.  From southbound 101, take Exit 2C for Broadway, continue to Main St., then turn left.  Parking on weekends is a $9 flat fee, but you’ll want to arrive by 10 on weekend days to get a space.

Here’s a revolutionary idea for L.A.:  Take Metrolink or Amtrak to Union Station, then walk the two blocks to Olvera St.  For lunch, you can get passable Mexican food at the Olvera St. places, or you can walk two blocks north on Alameda to Philippe’s The Original, one of the city’s oldest and most famous restaurants.  Chinatown is also just a few blocks north via Broadway.

Thanks for visiting Road Trips with Tom.  Please come back Sunday, May 7, as we visit Chiracahua National Monument in Arizona.

This week’s road trip takes us to Fort Scott END_OF_DOCUMENT_TOKEN_TO_BE_REPLACED

You can run out of adjectives really fast when describing END_OF_DOCUMENT_TOKEN_TO_BE_REPLACED