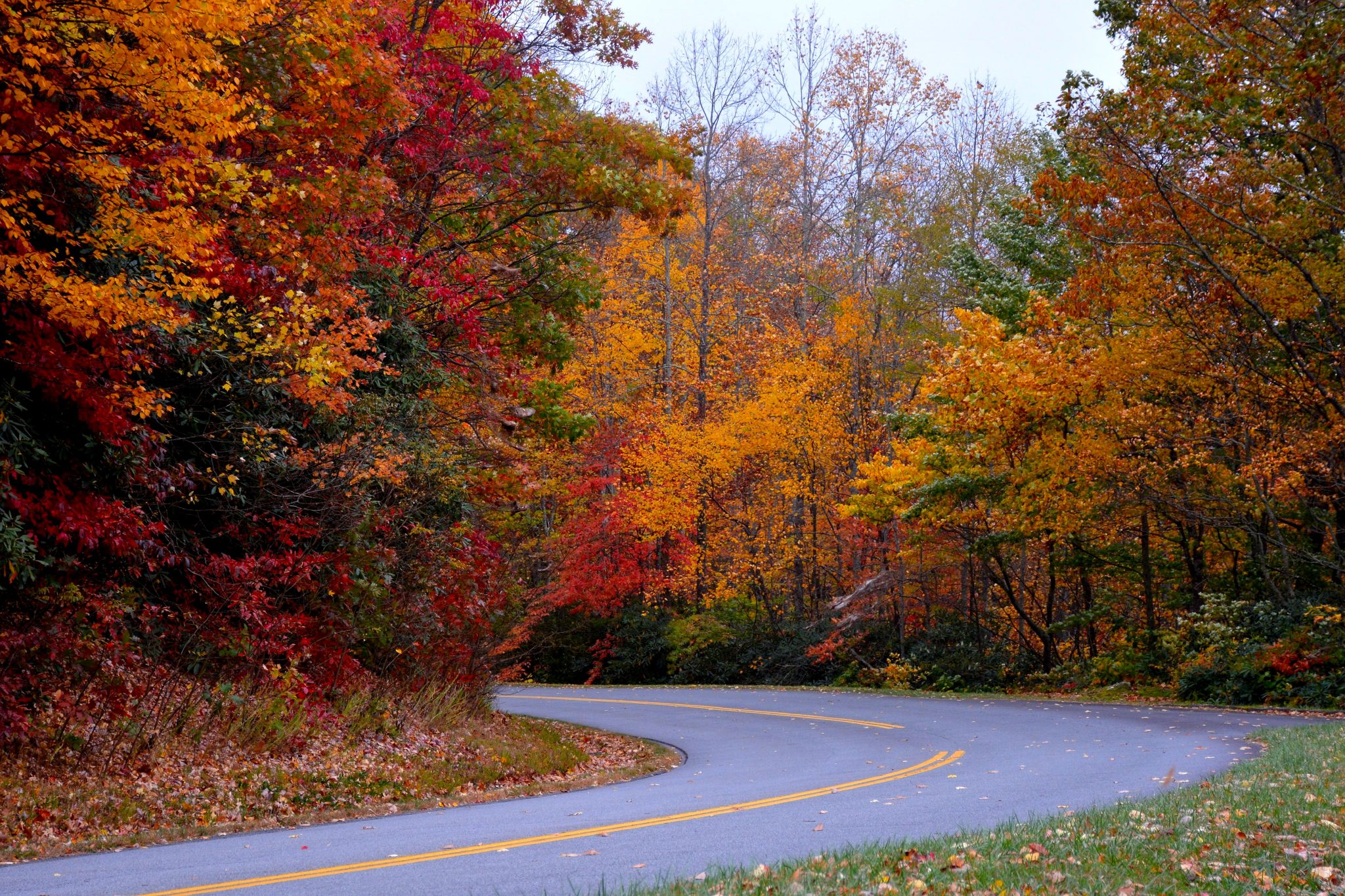 For this week, it’s the Cherohala Skyway and more.

Some of the handsomest mountain landscapes east of the Rockies are in the far western reaches of North Carolina.  I’m talking high ridges with summits above 6,000 feet, rushing streams ideal for fishing or whitewater rafting, sparkling waterfalls and dense hardwood forests that wear dazzling colors in the fall.

If that sounds like an area you’d like to visit, I have good news and bad news.  Bad news first:  The region isn’t exactly a secret.  The spectacular Blue Ridge Parkway is the most heavily visited unit in our national park system.  It gets 15 million visitors a year!  And Great Smoky Mountains National Park attracted over 11 million visitors in 2016.  That’s more than Grand Canyon and Yosemite combined!  We’re talking major crowds, gridlocked roads, smog, overused trails, litter, lines for restrooms and full parking lots — all the nasty things you came to a national park to escape.

Okay, enough bad news.  Here’s the good news:  There are places in the same region offering similar scenery, good highways, including highly acclaimed motorcycle routes, and adequate visitor facilities.  Of course, there’s nothing like those monuments to bad taste, Gatlinburg and Pigeon Forge, but you won’t mind missing them . . . trust me.

In this post, I’ll show you how to find amazing scenery with a fraction of the RVs and minivans that clog the Blue Ridge Parkway and Great Smokies Park.  Interested?  Read on, podnuh.

In the list of North America’s 25 most scenic highways that I posted in 2015 are three that are so close together you could combine them into a single road trip that’s barely 100 miles start to end.  The three are the Cherohala Skyway, Nantahala River Gorge, and Cullasaja River Gorge.  The Cherohala is an up-and-over mountain pass that looks very similar to the Great Smoky Mountains park road.  The Nantahala Gorge features a legendary whitewater raft and canoeing stream, and the Cullasaja has a concentration of beautiful waterfalls right alongside the highway.

The route begins at Tellico Plains, Tennessee, and ends in Highlands, North Carolina.  I’ll provide general directions, as well as links you can use to plan your road trip.

The only major city within three hours of our route is Atlanta.  It’s also where visitors arriving by air will land.  From Atlanta, follow I-75 to Marietta, then take I-575, which ends after 27 miles and becomes SR 5.  Stay on SR 5 to the Tennessee border, where your route becomes SR 68.  That will take you to Tellico Plains.

Tellico Plains ain’t much, but it does have the basic services travelers need.  Before setting out, make sure you have what you need, because there aren’t any services for 45 miles or so.

Turn right here onto SR 165, and you’re on the Cherohala Skyway.  The name is an amalgam of the two national forests traversed by the Skyway – Cherokee in Tennessee and Nantahala in North Carolina.  Just after your turn, on the left, is the Cherohala Skyway Visitor Center, open daily 9-5.  My best recollections from stopping here were a big souvenir shop, racks full of brochures for various “tourist attractions,” and a very nice, very helpful lady behind the counter.  You’ll find picnic tables and clean restrooms here.

For a good general introduction from National Geographic, go to ww.nationalgeographic.com/travel/road-trips/cherohala-skyway-road-trip/

The Skyway heads east alongside the amiable Tellico River.  After 5.1 miles, turn right on the road to Bald River Falls – a must-see side trip.  The road to the falls is paved but narrow and winding.  It’s also a beautiful drive, especially in spring.  The falls are about six miles upstream.  Return the way you came to SR 165, and turn right.

The Cherohala Skyway has 15 overlooks, with ample parking.  The road twists and turns enough that it’s been named one of the nation’s top 10 motorcycle roads.  The speed limit is mostly 40-45 mph.

The Skyway climbs steadily, reaching the North Carolina state line after 18 miles.  You’re now on NC SR 143.  There are overlooks with sweeping views on both sides of the road.  Two miles beyond the state line is Santeetlah Overook, elevation 5,390 — the Skyway’s high point.  The overlook here has restrooms.  The highway now begins to descend.  At the bottom of the grade is the turnoff to the Joyce Kilmer Memorial Forest, one of the largest tracts of virgin hardwood forest anywhere.  Kilmer (a man named Joyce) wrote the poem Trees.

About 10 miles farther east is the junction with US 129.  This is the end of the Skyway.  Follow US 129 south another 10 miles to a T-junction with combined US 19/74, then turn left.  You’re now in the Nantahala Gorge.

After two miles, the Nantahala River tumbles into the gorge and joins the main highway heading east.  For a scenic drive, turn right on paved Wayah Road and follow it upstream for a few miles.  You’ll have nice riverside views (including whitewater raft groups) fishing holes and launch areas.  Watch for dogwoods and azaleas in spring.

The Nantahala is one of the best whitewater rafting destinations in the East.  Its flow is dam-controlled, which makes it runnable all year.  Soon you’ll come upon the headquarters of the Nantahala Outdoor Center, the nation’s largest outdoor recreation company.  Go to www.noc.com for more information.  Also in Nantahala Gorge is the Great Smoky Mountain Railroad, which runs excursion trains here April through October.  Go to www.gsmrr.com for details.

Next comes the Cullasaja Gorge, which runs from Franklin to Highlands.  Your first objective is to get to Franklin.  Drive a few miles on US 19/74, then turn right at the well-signed junction with SR 28.  Stay on 28 when you arrive in Franklin after 17 miles.  You’ll be joined by US 64, then follow the combined 28/64 another 17 miles to Highlands.

The Cullasaja Gorge is also known as the Mountain Waters Scenic Byway.  After a few miles, the highway narrows.  Traffic is steady and constant.  Driving this section requires your full attention.

About 7 miles south of Franklin, you arrive at Cullasaja Falls. You can’t miss it; it’s 250 feet high and right next to the highway.  There’s a small turnout with room for two, maybe three vehicles.  Six miles farther, you come to 65-foot-high Dry Falls.  There’s a mini-park here with a parking lot and restrooms.  It took a long time to build, and the area was closed for two or three years.  When I returned last October, the lot was jam-packed, and forest rangers were directing traffic.

What makes Dry Falls special is that you can walk down a trail that takes you behind the falls.  The photo accompanying this post was taken before the construction.  It’s not a great photo, but you can clearly see the trail.

Next up, less than a mile farther on, is Bridal Veil Falls, which plunges from a rocky outcrop on your left.  An arc-shaped drive leads behind the falls.  That’s right; you can drive behind this waterfall.

Drive another couple of miles, and you enter the town of Highlands.  This is the end of our Cherohala-Nantahala-Cullasaja road trip.  At an elevation of 4,118 feet, this is the highest incorporated community east of the Mississippi.  It’s also very upscale, as you can see from the small downtown.

US 64 turns west here and runs through a large area with upscale developments – second homes and retirement communities.  There are numerous lakes and golf curses.

To return to Atlanta, continue south on SR 28, which slices through the far northeast corner of Georgia, then takes you into South Carolina.  Stay on 28 for 15 miles or so, then turn right onto SR 11.  After several miles, that will land you on I-85 just east of the Georgia border, then whisk you to downtown Atlanta and Hartsfield Airport.

Thanks for spending some time with Road Trips with Tom.  Please return Sunday, April 30, as we visit El Pueblo de los Angeles — where LA began.

This week’s road trip takes us to Fort Scott END_OF_DOCUMENT_TOKEN_TO_BE_REPLACED