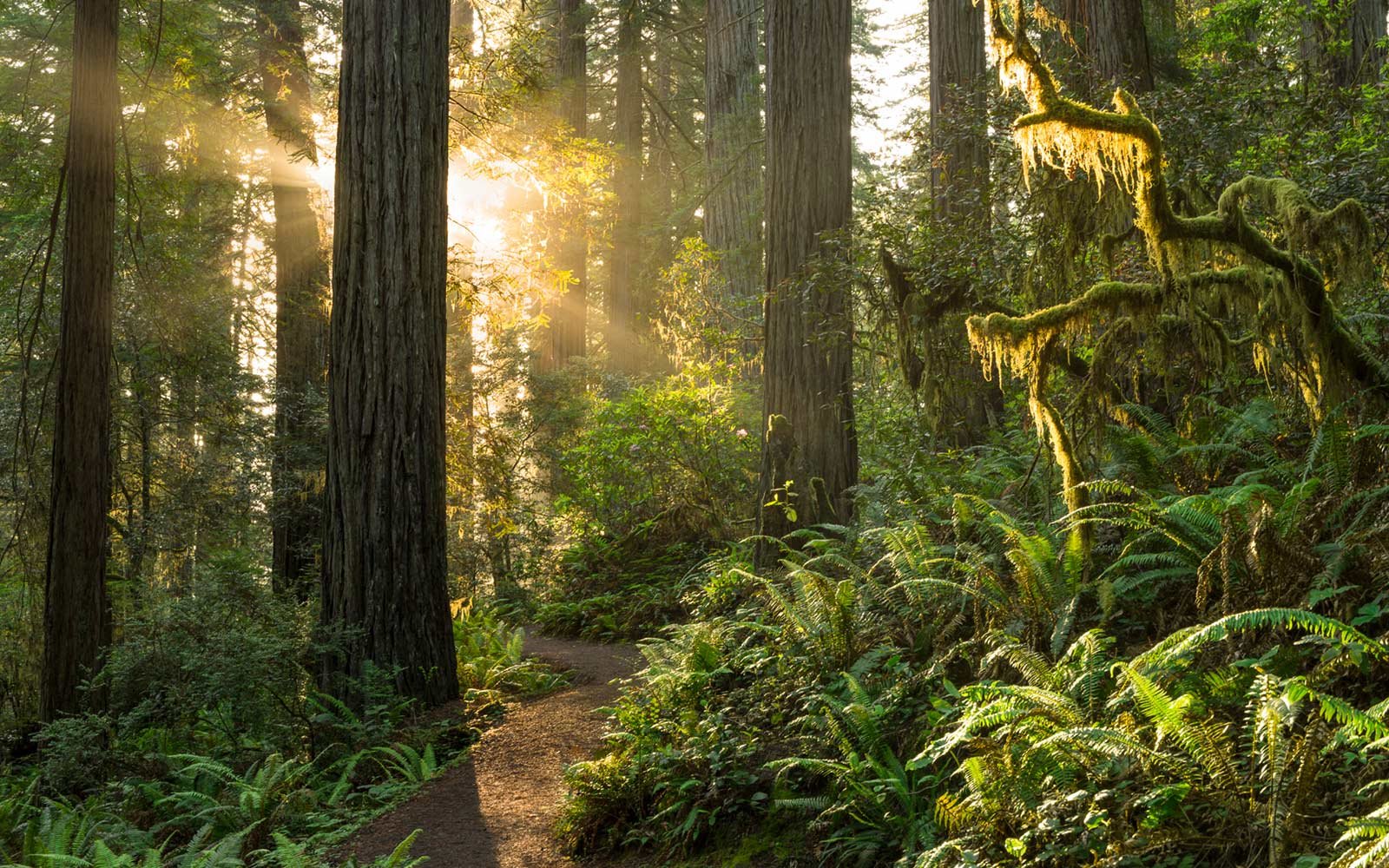 This week Road Trips with Tom heads to Redwood National Park, which is as far north as you can go and still be in California.

There’s so much to cover about this fantastic area that I’ve divided it into two posts.  Part Two will be published Monday, September 25.  In today’s post, I’ll give you the lay of the land and outline the things most people coming here will need to know.   In Part Two, I’ll lead you on a joyride through the park from south to north and offer suggestions on how you can have a memorable visit.

The Forest Moon of Endor

This park, as you might suspect, is all about trees.  These aren’t just any trees, but the world’s tallest trees, which live in the lushiest, most luxuriant forests anywhere.  It’s so lush, in fact, that it appeared as the Forest Moon of Endor in Return of the Jedi.  Who knows?  You may see some Ewoks. Bring your speeder.

You can see this explosion of cinnamon-colored bark and green understory in the photo at the top of this post, which, by the way, was sourced from Travel and Leisure.

First, a clarification:  The official name of our destination is Redwood National and State Parks.  It’s jointly managed by the National Park Service and the California Department of Parks and Recreation.  I’ll explain why in a paragraph or two.  For convenience, in this post I’ll use the singular word “park” to refer to this mishmash.

But let’s get back to those trees.  After all, that’s why people come here, although the redwoods aren’t the only attraction.  In Redwood National Park they find the largest concentration of old growth coastal redwoods, which grow in a narrow belt near the Pacific coast between Big Sur and the Oregon border.  The biggest are over 370 feet tall – way taller than the Statue of Liberty – and can live over 2,000 years.  They’re stately and dignified, and the forest is so peaceful and cathedral-like you’ll want to speak in a respectful whisper.

Because the park is so far from major population centers, visitation is only moderate – just 536,000 last year.  As a result, finding solitude in the forest and on the trail is relatively easy to do, even in summer.

If you’ve never seen these redwoods, block out some time, gas up Old Betsy and hit the road.  As a bonus, you can experience 40 miles of rugged coastline, wonderful hiking trails and the park’s elk herds.

When to come?  The area gets up to 100 inches of rain yearly.  Fog is common, especially in summer.  In fact, the coast redwoods get almost half their needed moisture from fog.  Spring and fall are ideal.  Spring has a bonus of pink rhododendrons, which usually bloom mid-May to mid-June.  Allow yourself at least two days here.

SIDEBAR:  For the uninitiated, the coast redwoods (sequoia sempervirens) are a different species than the giant sequoias that grow in the Sierra Nevada.  These are the world’s tallest living things, but the giant sequoias are more massive and can grow older.  If you’d like a comparison from Oscar-winning documentarian Ken Burns, click here:  www.youtube.com/watch?v=CWrNMyR30GM&t=103s

In the 19th-century, the tremendous influx of people into California generated a big-time demand for wood.  At first, the redwoods were just too massive for early lumbermen.  But by the turn of the century, technology caught up.  In a short time, most of the two million acres of virgin redwood forest was decimated.  In response, conservationists formed the Save the Redwoods League, and the State of California created three state parks to preserve a remnant.

However, it became clear that the redwoods were still at risk from lumbering taking place nearby.  The federal government in 1968 created Redwood National Park to preserve 100,000 acres of forest. Driving on US 101 you’ll transition between a national park and Prairie Creek Redwoods, Del Norte Coast Redwoods and Jedediah Smith Redwoods State Parks.  If it’s confusing to you, imagine how confused the people who manage it must be!

Redwood National Park has a very useful website – www.nps.gov/redw — where the landing page has a link to the official video shown at the park’s visitor centers.  It will also link you to a list of scenic drives and hiking trails, as well as basic information on hours, fees, directions and campgrounds.

The national park has no entry fee.  However, the state parks charge entry fees at campground entrances and at Gold Bluffs Beach. Since it’s as state fee, your federal senior pass, if you have one, is invalid, and you’ll have to pony up.  Camping is a steep $35 per night, and reservations are needed in summer.  The website has a link for reserving a site.

This is the end of Part One of our two-part post on Redwood National and State Parks.  In Part Two, which will appear on September 25, I’ll lead you on a tour of the parks and offer suggestions on how you might spend your time.

Thanks for visiting.  See you next week!

This week’s road trip takes us to Fort Scott END_OF_DOCUMENT_TOKEN_TO_BE_REPLACED

You can run out of adjectives really fast when describing END_OF_DOCUMENT_TOKEN_TO_BE_REPLACED