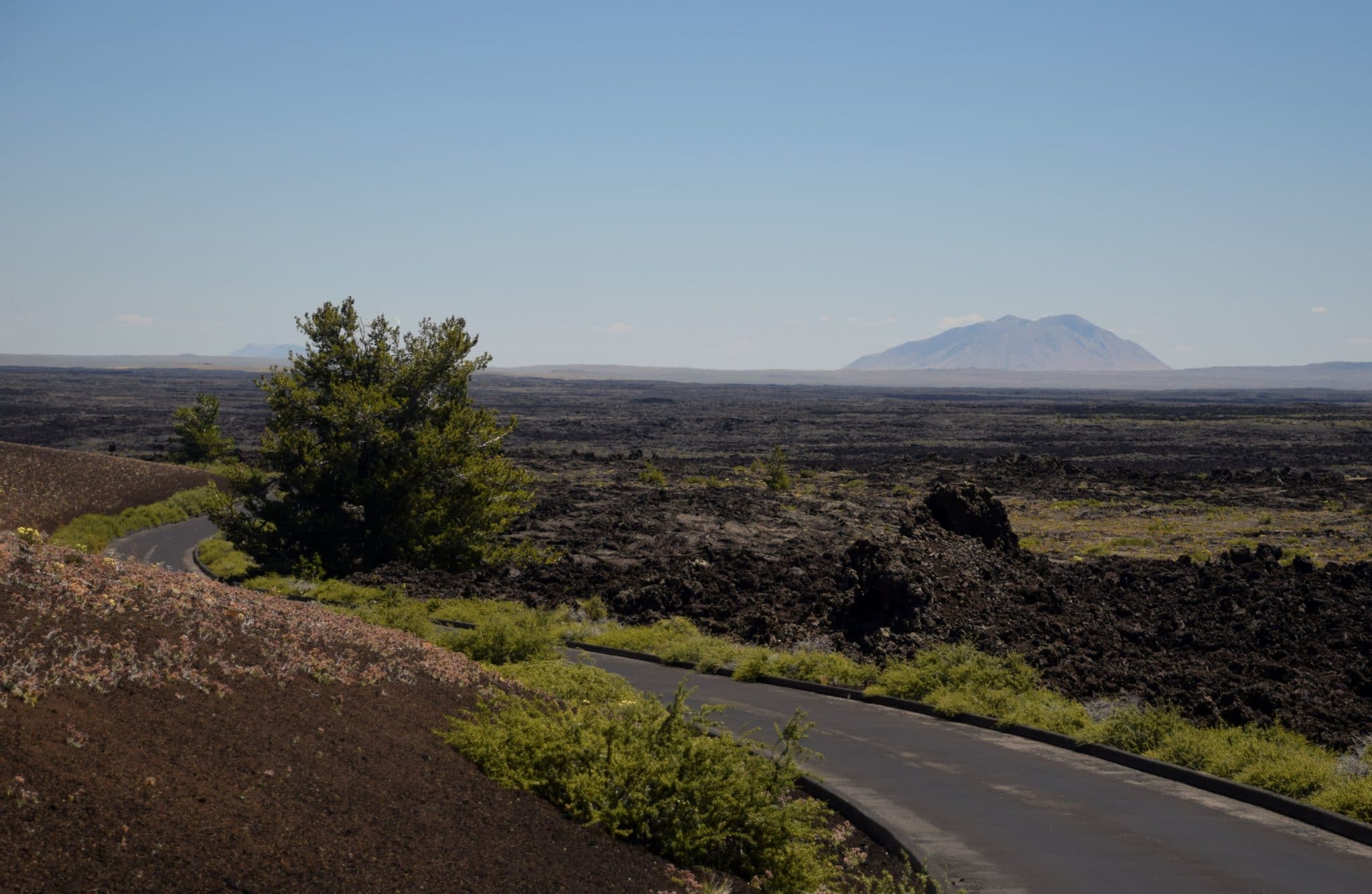 This week, we’re headed to the Craters of the Moon in Idaho.  It’s not a pretty place, and it’s a long drive from just about anywhere.

First, it may not be pretty, but it’s fascinating.  It’s one of the best examples you can find of a volcanic landscape.  It’s downright eerie to see hundreds of square miles of devastation – a scene that suggested to early scientists what the surface of the moon might look like.  Second, even though it looks remote on a map, it’s easy to visit  It’s just off the main travel routes to and from Yellowstone and Grand Teton National Parks, which attract gazillions of vacationers and road-trippers every year.  And third, you can see what most people want to see in about two hours, making it a convenient stopover between major road trip destinations.

The official name is Craters of the Moon National Monument and Preserve.  It’s located 18 miles southwest of Arco and 64 miles northeast of Shoshone on combined US highways 20, 26 and 93.  The nearest towns of any size are Twin Falls on I-84 and Idaho Falls on I-15, both of which are about a two-hour drive and the nearest places you’ll find the travel services most people want.

A doorway to Yellowstone

Despite its relatively remote location, over a quarter of a million people visited the monument last year.  I was there in June and, while not what you’d call crowded, it was fairly busy, and the campground was full.  Just about everyone I met there was headed to or from Yellowstone.

The monument is open all year, but winter weather usually closes the scenic loop drive between November and April or May.  To check current conditions, surf to www.nps.gov/crmo

If you’re camping, you’ll find the monument’s campground just beyond the visitor center.  All sites are first-come, first-served and cost $15 per night.  They have water, restrooms and charcoal grills.  Wood fires are prohibited.

For most of us, lava is associated with volcanoes like Mt. St. Helens, which literally blew its top in 1980 and sent molten lava flying for thousands of square miles.  Craters of the Moon’s lava didn’t form in a single massive eruption.  Instead, lava oozed from a series of fissures called “The Great Rift” in a series of eight events beginning 15,000 years ago and continuing to 2,000 years ago.  The lava flowed then cooled, leaving such features as lava caves, spatter cones and fields of smooth lava looking like rivers of black stone.  Even though we now know that the moon’s craters were caused by meteorites, NASA in 1969 brought Apollo 14 astronauts here to get a feel for a lunar-like landscape.

You can get a good glimpse of the lava fields’ extent by using the satellite view function on Google maps.  Or you can watch a nice YouTube preview at www.youtube.com/watch?v=JBxADn0znaY

Your first stop should be the visitor center, where you can learn more about the monument’s geologic history.  While there, check the schedule of ranger-led programs.   If you’d like to explore one of the lava caves, you can get a free permit at the visitor center.  For more information, go to www.nps.gov/crmo/planyourvisit/cave-permits

You may have to copy and paste the link above and the one in the next paragraph.  They didn’t work properly when I tested them.  Sorry for any inconvenience.

Next, set out on the 7-mile scenic drive, which gives you a good sample of the monument’s volcanic landscape.  Most of the seven numbered stops have short trails that will let you get up close and personal with the formations.  For a description and map of the scenic drive, go to www.nps.gov/crmo/planyourvisit/loop-road

You might be surprised at how much vegetation grows here.  You’ll see trees, sagebrush and a variety of shrubs.  There’s even a wildflower display in late spring.

Thanks for visiting Road Trips with Tom.  Next week we’ll visit Redwood National and State Parks in the far northwest corner of California.  I hope you’ll join me again for that on Monday, September 18.

Welcome to Benefit Street – the most impressive neighborhood of END_OF_DOCUMENT_TOKEN_TO_BE_REPLACED

This week, Road Trips with Tom steams down the mighty END_OF_DOCUMENT_TOKEN_TO_BE_REPLACED