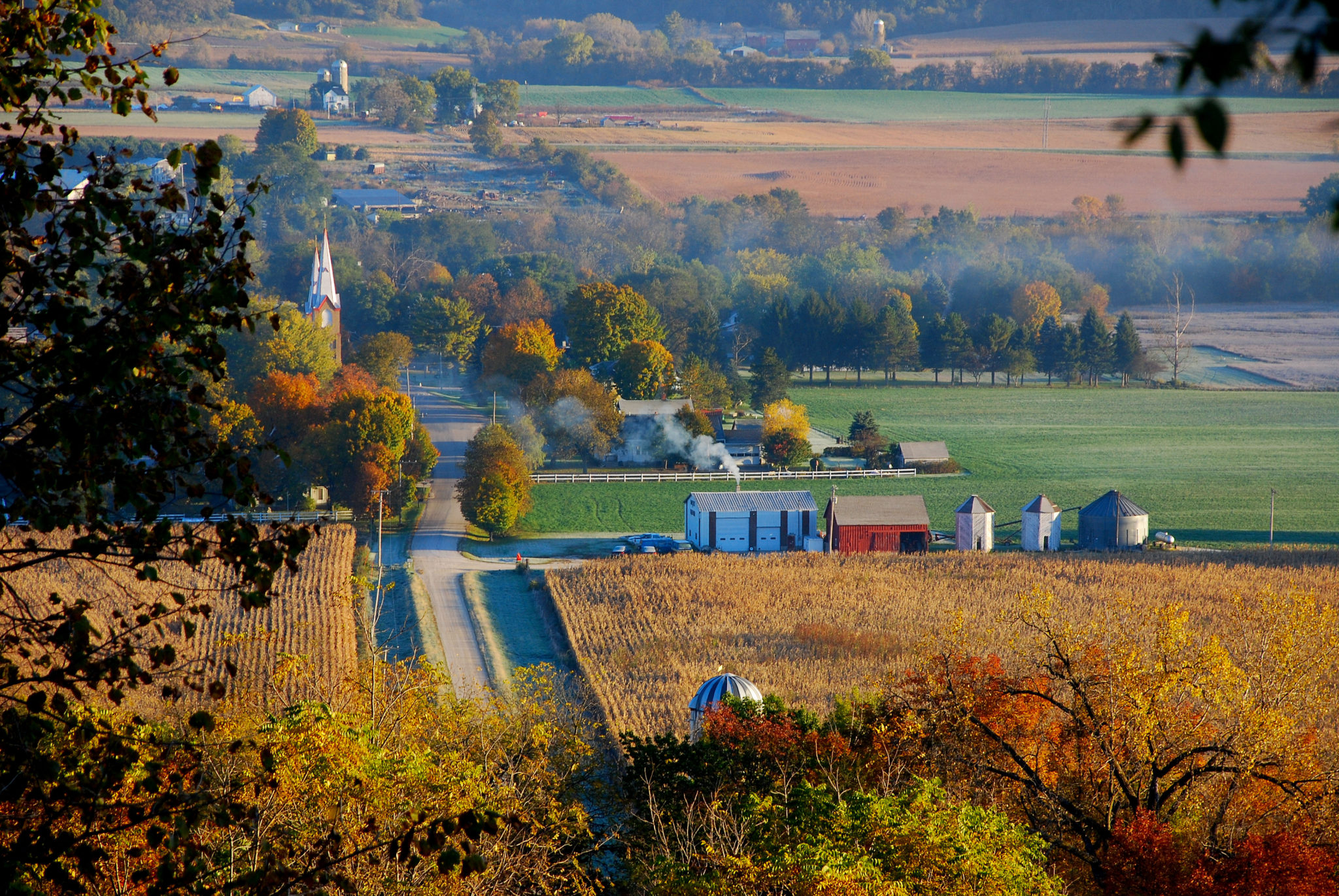 Thanks for joining me.  This week, we’re taking a road trip around northeastern Iowa.

Wait – don’t touch that mouse.  Don’t be one of those people who assume all of Iowa is one big table-flat cornfield.  The part we’ll be visiting is hilly, with high ridges, deep valleys, and beautiful streams, including Old Man River, the Mississippi.  This is what’s known as the “Driftless Area” – an area that wasn’t buried under a giant continental glacier.  In northeastern Iowa, northwestern Illinois, southwestern Wisconsin and southeastern Minnesota, you’ll find the most rugged scenery in the Midwest, as well as delightful small towns and wonderful byways for road-tripping.

Our route is about 200 miles long and makes for a great weekend if you live in Chicago, Milwaukee or the Twin Cities.  It’s also a terrific road trip for motorcycles.

Start in Dubuque, then hit the road

Our starting point is Dubuque, located on the Mississippi River where Iowa, Illinois and Wisconsin meet.

This funky city of 58,000 is unique among Iowa cities.  It’s wedged between high bluffs and the river, and the city has climbed from the river plain up the bluffs and beyond.  It’s an old river town, and it retains just enough seediness and 19th-century architecture to make it interesting.

The location was first settled in 1785 by Julien Dubuque and was officially chartered in 1833.  The town’s original economic engine was lead mining, but it eventually became an important river port and center for diversified manufacturing.

I’m not going to spend much time in Dubuque.  I’d rather get going on our loop trip, because there’s a lot to show you.  But if you’d like to tarry in Dubuque, you’ll find lots of information at www.traveldubuque.com

To begin our scenic loop, drive north out of town on US 52.  After a few miles, you’ll come to the village of Sageville.  Turn right on Shirley Road, which is the local name for the Great River Road.

For the next 30 miles or so, you’ll climb and wind through some of the most beautiful farm country you’ll ever see.  It’s on a high plateau, which offers occasional views of the Mississippi below and to your right.

The county road rejoins US 52 a few miles south of Guttenberg – a cute little river town with limestone buildings housing shops, cafes and galleries.  Guttenberg was originally settled by German immigrants during the 19th century.  From here, a ferry will take you to Cassville, Wisconsin, where you can take a side trip to  the Stonefield historical recreation.

Continuing on our Iowa route, turn right at Guttenberg onto County Road X56.  Your destination is Pikes Peak State Park.  It’s obviously not in the Rocky Mountains, but it was named after the same guy – Lt. Zebulon Pike – as its Colorado namesake.

Like its more famous cousin, Iowa’s Pikes Peak is all about the views.  The viewpoint at the end of the entrance road is the highest point along the entire Mississippi.  The view is awesome (see photo below).  You’ll also find a campground here.  Sites can be reserved; for information, go to www.iowastateparks.reserveamerica.com/camping/pikes-peak-state-park/r/campgroundDetails.do?contractCode=IA&parkId=610141

The road quickly descends to river level and the twin towns of  McGregor and Marquette.  The word “twin” isn’t exactly accurate. McGregor is another picturesque 19th-century village with handsome stone buildings.  At Marquette, on the other hand, you’ll find a big riverboat casino and a bridge to Prairie du Chien, Wisconsin.

Continue north along the river after crossing the bridge approach, and you’ll be on SR 76 headed to Effigy Mounds National Monument.  There, native Americans built over 200 burial mounds.  There are two groups of trails – the North Unit and South Unit.

As a westerner, I wasn’t hugely impressed by these grassy mounds, especially in comparison with the ruins that dot the Four Corners region.  However, Effigy Mounds is an exceptionally scenic location with a mix of deciduous trees and tallgrass prairie.  Fall foliage is spectacular here.  It’s a great place for a quiet stroll.  You’ll find the visitor center right on SR 76 in the north unit.  It’s open 8-6 from Memorial Day to Labor Day, 8:30-4:30 the rest of the year.  The park’s trails are open from dawn to dusk daily.  There’s no entry fee.  For more information, go to www.nps.gov/efmo

Our next stop is Decorah, a city of 9,000 and the home of Norwegian culture in America.  To get there, follow SR 76 to Waukon, then head west on SR 9.  The main attraction in Decorah is Vesterheim – the national Norwegian-American museum and heritage center.  It houses the world’s most extensive collection of Norwegian-American artifacts.  Hours are 9-5 daily May 1-October 31 and 10-4 the rest of the year.  Admission is $10 for adults, $8 for seniors and $5 for ages 7-18.  Website:  www.vesterheim.org

A few miles north via US 52, almost to the Minnesota border, is Burr Oak – childhood home of Laura Ingalls Wilder, author of Little House on the Prairie.  The Laura Ingalls Wilder Park and Museum has a varied schedule.  Go to www.lauraingallswilder.us  for details.  I did not visit this attraction and don’t have any photos to show you.  It was under construction when I last visited the area.  P.S.  You may have to copy the above link and paste it into your browser.

To continue our road trip tour of northeastern Iowa, drive south from Decorah on US 52 for a few miles, then take the signed county road on your right to Spillville.  In this tiny hamlet founded by Czech immigrants is an unassuming house with a remarkable history.  Look for the sign that says “Bily Clocks.”

Two bachelor farmers, sons of Czech immigrants, spent the long winters building fantastic clocks – you have to see them to believe them.  Fortunately, you can.  Despite having gotten an offer from Henry Ford for $1 million, they never sold any of their clocks,

That’s not all.  Before the Bily boys moved in, the legendary Czech composer Antonin Dvorak spent a year living in the same house, where he wrote music that inspired his famous “New World” symphony.  The house, which contains Dvorak-related artifacts as well as the Bily brothers’ magnificent clocks, is open May through October 9-5 Mon.-Sat. and 12-5 Sun.  Admission is charged.  Go to www.bilyclocks.org for details.

From Spillville, head south on US 52, then proceed on SR 150 from Calmar. After passing the turnoff to tiny Eldorado, the road climbs a hill, and a sign directs you to Goekin Park.  If you enter the park and drive to the end of the circle, you’ll be where I took the featured photo at the top of this post.

What a small town should be

Continue on SR 150 to West Union, then turn left onto SR 56.  We have one more destination on our northeastern Iowa loop – the small town of Elkader.  I found this little gem by accident several years ago.  There’s no specific attraction.  Rather, this is what many people would say a small town should  be.  It’s the kind of place Norman Rockwell would paint.  I recommend you park your car and stroll down the main street.  Everyone you pass will smile and say hello.  There are no boarded-up businesses.

When you’re able to tear yourself away from Elkader, drive south on SR 13, then go left on SR 3 to return to Dubuque.

When you take this road trip, you’ll find plenty of accommodations in Dubuque.  A few can be found in Decorah and Prairie du Chien.

Thanks for joining me.  Next week, I’ll be on a road trip to gather information and images for future posts.  The blog will be pre-programmed with a visit to Idaho’s Craters of the Moon National Monument.  Happy travels!

This week’s road trip takes us to Fort Scott END_OF_DOCUMENT_TOKEN_TO_BE_REPLACED

You can run out of adjectives really fast when describing END_OF_DOCUMENT_TOKEN_TO_BE_REPLACED