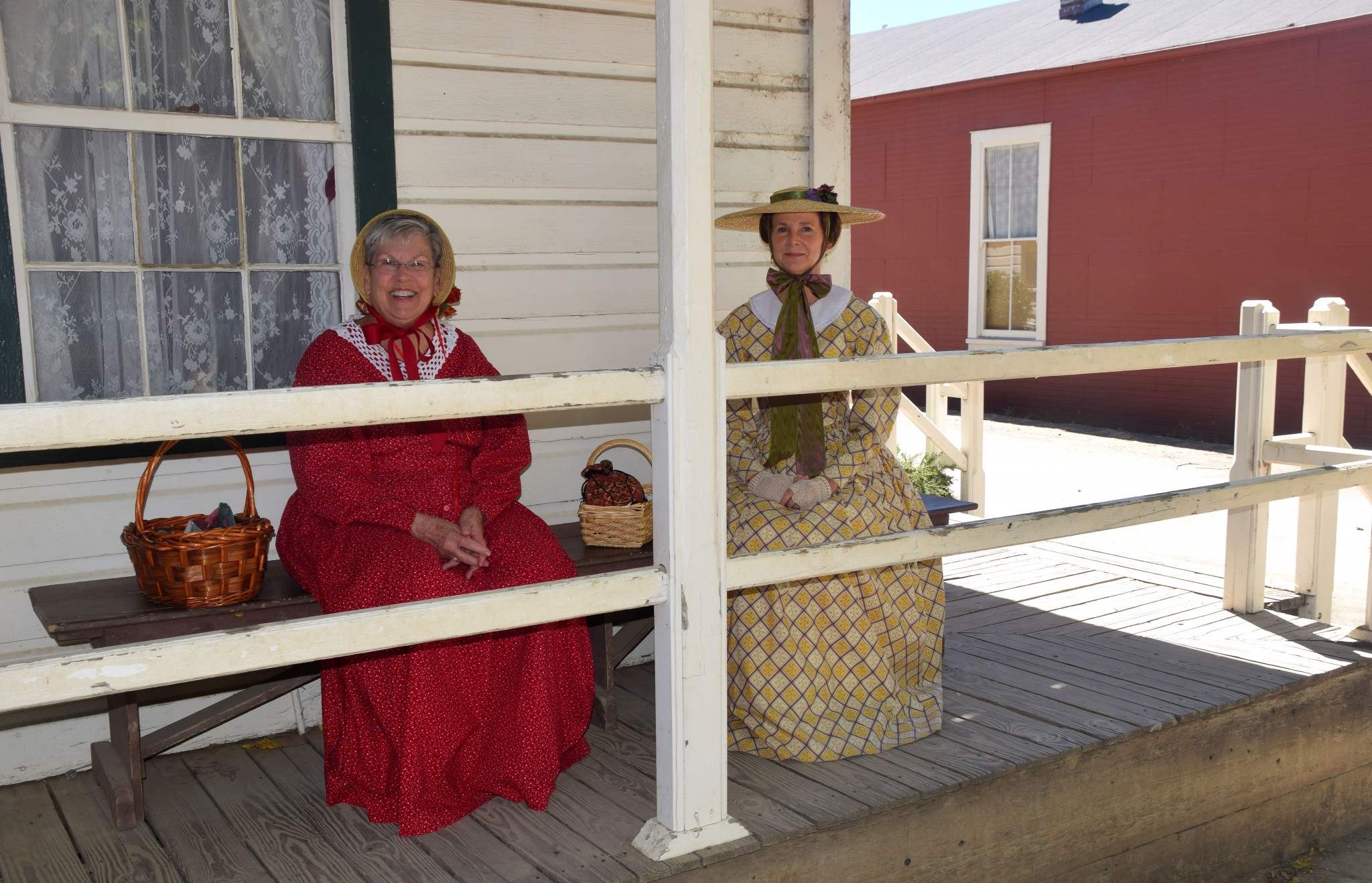 Columbia was one of the dozens of mining camps that sprang to life in the early 1850s, following James Marshall’s discovery of gold along the American River farther north.  Like several others, it rapidly mushroomed in population after gold was discovered nearby.  It quickly acquired the trappings of boomtown civilization, including churches, stores, schools, a newspaper, numerous stores, saloons and whorehouses.  There was even a Masonic Lodge.

I visited Columbia on a hot Saturday in late July.  It was a work day – gathering information and photos for this blog, then driving north to Old Sacramento to do the same.  I figured I was heading for a tacky tourist trap with hordes of other people and a tough time finding a place to park.  Not fun.

Well, surprise!  I had a good time at Columbia State Historic Park, and I think you will, too.

It combines historic authenticity with a fun, upbeat atmosphere.  Columbia is like an aging dowager who, despite living in reduced circumstances, wears her best frocks and a smile.

My mood improved considerably when I found a great parking spot just a short mosey from the main street. The historic area was fairly crowded when I visited, but all the people added rather than detracted from the overall vibe.

I recommend Columbia as a half-day destination.  That includes time to take a docent-led walking tour, check out the museum and displays, take a stagecoach ride and browse the shops.  You could easily stretch that to a full day without getting bored.  It’s a two-hour drive from Sacramento and 2 ½ hours from San Francisco, making a day trip possible.  A weekend would be better.  From Southern California, even a weekend trip would be a tad too hectic.  Columbia would be ideal for a three-day weekend or as a stop for people heading to or from Yosemite National Park.  Got kids?  They’ll love this place, especially the stagecoach rides, the ice cream store and the candy shop.

Let’s start with some background.  Gold was discovered in January 1848.  At that time, California was a remote agricultural backwater and technically a possession of Mexico.  It took time for the word to get out, but the following year saw an influx of over 300,000 people from around the world.  These were the Forty-Niners who changed California forever.  By September 1850, California was the 31st U.S. state and hasn’t looked back since.

The Gold Rush focused on what became known as the “Mother Lode” – a narrow, 200-mile-long belt of gold-bearing ore in the foothills of the Sierra Nevada.  Early strikes were stream deposits – placer gold – that were downstream from the Mother Lode itself.  The countryside where the Gold Rush took place is typical California foothill country, with grassy hills dotted with graceful oaks.

Still alive after all these years

Columbia wasn’t the richest Mother Lode camp, although it produced as much as $100,000 in gold per week during the early 1850s.  Overall, its mines accounted for over $150 million.  Columbia’s population peaked at over 25,000, making it one of California’s biggest cities for a time.  What really made Columbia special is survival.  It’s still here 150 years after the mines played out.

Columbia began when placer gold was discovered here in March 1850.  By 1852 it boasted over 150 stores, shops and other business enterprises.  Like many other Gold Rush towns, Columbia was ravaged by fire, but in 1857 the town was rebuilt using locally produced red brick and iron shutters.  That’s what you see today – the state’s largest collection of Gold Rush-era buildings.

Lots of free things to do

Like all mining towns, bust followed boom, and Columbia was left to wither. It never became a ghost town, although its historic structures decayed over the years and were in pretty bad shape when the State of California acquired the town’s historic core.  After it became a state historic park in 1945, the town’s buildings were restored.

Columbia is more than a state park.  People live here, so the town never closes.  Most businesses are open 10-5 daily except major holidays.  One very cool aspect of Columbia is the cost.  Admission is free.  Parking is free.  The museum and exhibits are free.  Guided tours are free.

So what’s there to do here?  The historic core is a three-block stretch of Main St., with spillover onto a few cross streets.  This is where you’ll find just about everything you want to see.  The heart of the historic park is the intersection of Main and State.  Here you’ll also find the Columbia Museum, which serves as the park’s visitor center.  Just outside the museum’s door is the starting point of docent-led walking tours, which are conducted daily at 11 a.m.  While visiting the museum, be sure to pick up a park brochure, which has a very useful map to help you find your way around.

Within a short walking distance are shops displaying the types of merchandise that was sold during Gold Rush days. Shopkeepers dress in period costumes, as do docents who lead tours, staff the exhibits and welcome visitors.  The exhibits include a schoolhouse, blacksmith shop, dentist office, assay office, firehouse, jail, drug store, Chinese store, bowling saloon, livery stable, wagon barn and more.  All are free.   (There’s that word we all love to hear!)

If you have kids, you’ll want to take them for a stagecoach ride.  These start next to  the Wells Fargo building a block south of the museum.  The cost is reasonable; go to www.qmcarriage.com for details.  How about panning for gold?  Visit the Hidden Treasure Gold Mine at the south end of Main St.  At another shop on Main St. you can have your photo taken wearing an 1850s-era costume.

I wasn’t impressed with the state park’s website.  A better one is produced by the local chamber of commerce.  Go to www.visitcolumbiacalifornia.com, where you’ll find lots of information about the town, plus a rather cool interactive map.

What about food and lodging?  Two historic hotels – the City Hotel and Fallon House — will rent you a room with antique furnishings (that means no TV) and baths down the hall.  If you’d rather eschew the rustic trappings for something more modern, you’ll find plenty of lodging choices in nearby Sonora. As for food, the only real restaurant is the City Hotel Dining Room, where you can get a $15 hamburger.  The state park has a dozen picnic areas, so you might want to plan on a picnic lunch.  You’ll find a deli on Parrott’s Ferry Road, as well as two Subways and a Togo’s in Sonora.

Columbia is on State Route 49, which runs from one end of the Gold Rush country to the other, its number honoring the Gold Rush.  (By the way, did you know that California’s green highway shields represent miners’ shovels?)  To get there, you’ll want to find your way to Sonora, which is at the junction of SRs 49 and 108.  Directions are a bit complicated, so I’ll let you use your map or GPS to figure out your route.

From Sonora, go 4 miles north on SR 49, then turn right onto Parrott’s Ferry Rd., which becomes Broadway St. when you enter Columbia.  The largest parking lots are near the south end of town.  There are others; look at the interactive map on the chamber of commerce web site for their locations.  I arrived about 9:30 on a Saturday morning and was able to score a space in the lot on Broadway between Fulton and State.

It gets hot here in the summer (102 degrees the day I was there), but there’s plenty of shade (not to mention ice cream).  Spring is probably the nicest time in the Sierra foothills.  It rains in winter, and it’s been known to snow.  Of course, you can go broke really fast by betting it’s going to rain or snow in California.

Thanks for visiting Road Trips with Tom.  On Sunday, October 16, we’ll take you to Devils Tower National Monument in northeastern Wyoming.  Meanwhile, you can prepare by watching Close Encounters of the Third Kind.  Unfortunately, you won’t find it on Netflix or Amazon Prime.

One thought on “Road trip to the Gold Rush”

This week’s road trip takes us to Fort Scott END_OF_DOCUMENT_TOKEN_TO_BE_REPLACED

You can run out of adjectives really fast when describing END_OF_DOCUMENT_TOKEN_TO_BE_REPLACED