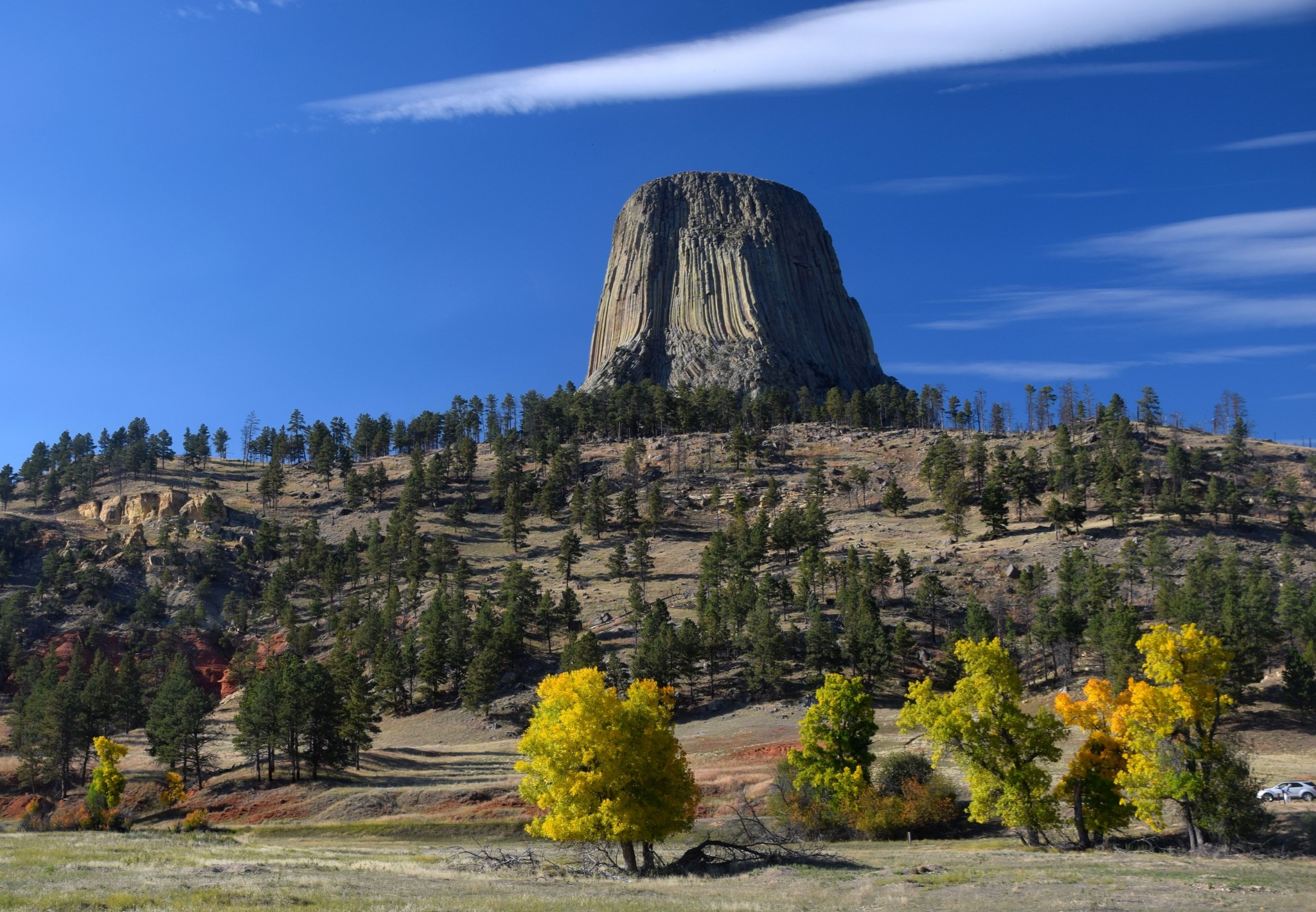 The first time I saw Devils Tower was in the 1977 film Close Encounters of the Third Kind.  It was used as the site of the alien mother ship’s landing.  My favorite memory from the movie was when Richard Dreyfuss made a model of the tower out of mashed potatoes.

Devils Tower is an amazing formation that looks like a gigantic tree stump rising 1,200 feet above the rolling countryside on the western edge of the Black Hills.  It’s really a surreal sight.  It’s the nation’s oldest national monument, having been designated in 1906 during Theodore Roosevelt’s administration.

A short visit is enough for most people

How did it get here?  No, it wasn’t brought by aliens.  Way back in geologic time, which is measured in millions of years, molten magma was pushed upward from way below the surface.  As it cooled, it hardened into stone and contracted into columns.  Eventually, the surrounding land was eroded, and the tower was exposed, creating the formation we see now.  Think of it as a geologic striptease.

Despite its out-of-the-way location, nearly half a million people visited the monument in 2015.  Most stayed only an hour or two.  There’s a good reason for that.  Five thousand people climb the tower every year.  Unless you’re crazy enough to be one of them, there’s not a whole lot to do here other than look at the tower from different angles.  It’s an impressive sight, but it doesn’t take long to feel you’ve been there and done that.

So Devils Tower is definitely worth seeing, but it’s best visited as a stopover on a road trip between the Black Hills and Yellowstone.  It’s only a 30-mile detour from Interstate 90.

Most people’s first stop is at the large prairie dog town just inside the monument’s entrance gate.  From there, the park road winds around the tower to the visitor center.  The center is in an old, very cramped log building that has space for only a few displays and the usual bookstore.  This is the starting point for the 1.3-mile Tower Trail, which circles the tower and lets you get up close and personal.  Trust me, except for shadows depending on the time of day you visit, it looks just about the same on both sides.

Before we get into the logistics of visiting Devils Tower, let’s talk about crowding, which is an issue here. The vast majority of visitors come in summer.  The visitor center’s small parking lot is jammed – sometimes the overflow lot down the hill fills up as well.  Forget being able to move around inside the visitor center.   Even the turnout next to the prairie dog town is often filled with vehicles.

The monument has a very nice campground just west of the prairie dog town.  When I was there in late September, the trees were turning gold for fall, and there were mule deer grazing among the campsites.  Only a few campsites were occupied.  That tranquil scene is anything but in midsummer.  Sites are first-come, first-served, and the campground fills up early.  The most crowded time is early August, when over a million bikers converge on Sturgis, S.D., an hour east of here.  Next year’s Sturgis rally will take place August 7-13.

You’ll find a Best Western and a couple of iffy-looking motels in the nearby town of Hulett.  The little town is pretty much taken over by motorcyclists before, during and after the Sturgis rally.

Thanks for visiting Road Trips with Tom.  Next Sunday I’ll be on the east coast for my annual fall foliage trip.  The blog will be pre-programmed with a short visit to the Lyon Air Museum in Orange County, California.

This week’s road trip takes us to Fort Scott END_OF_DOCUMENT_TOKEN_TO_BE_REPLACED

You can run out of adjectives really fast when describing END_OF_DOCUMENT_TOKEN_TO_BE_REPLACED