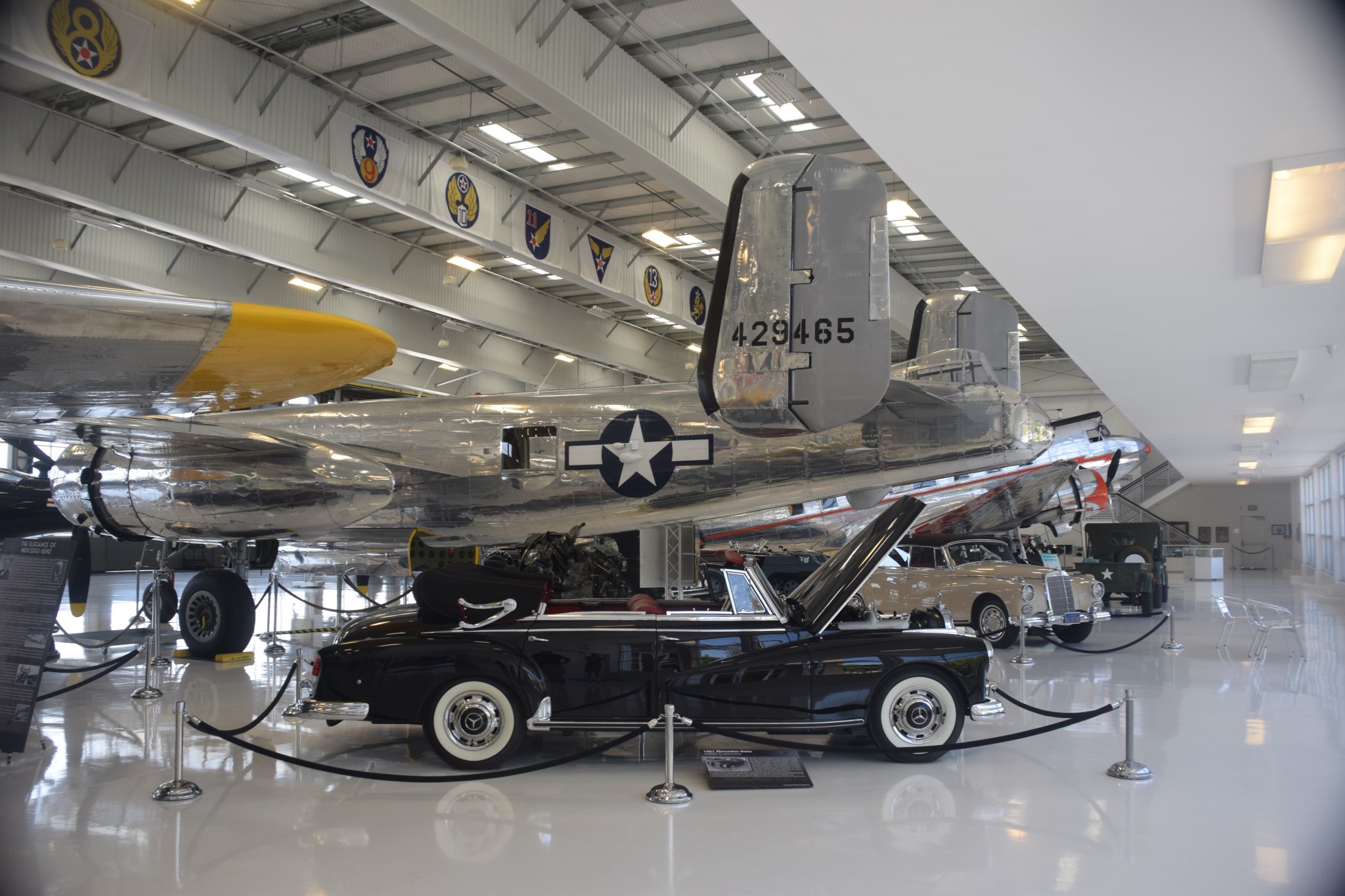 Our destination this week is the Lyon Air Museum in Santa Ana, California.  For the many Road Trips with Tom guests who live in Orange County, this is one of the shortest road trips you’ll find.  It’s located just across the tarmac from John Wayne Airport.

I’d never heard of this museum until my friend Bill Gordon told me about it.  He agreed to come with me on a visit last month.

What we found is a large hangar with an eclectic collection of aircraft and vehicles, ostensibly with a World War II military theme.  I say “ostensibly,” because one of the vehicles was a Helms bakery truck, and another was a ’62 Mercedes-Benz.

A small but very cool collection

The collection is small but impressive.  Among the aircraft is a Boeing B-17 Flying Fortress used as a VIP transport near the end of the war.  It once carried General (and later President) Dwight D. Eisenhower and appeared in the movie Tora!  Tora!  Tora!  There’s also a Douglas A-26 Invader fighter.  The A-26 fought in more wars than any other aircraft of its era.  All in all, you’ll see about a dozen aircraft here.

If you want to see a bigger aircraft collection, you’ll have to drive to the March Field Museum near Riverside.  Or, for one of the world’s biggest collections, head for the Pima Air and Space Museum near Tucson, Arizona.

The vehicles at the Lyon Museum include, in addition to the bakery truck, such military vehicles as a 1943 Ford military Jeep, a German staff/field command car, and a couple of military motorcycles.  Also on display the day we visited was Steve McQueen’s 1931 Panther motorcycle.

The most impressive thing about the Lyon’s collection is the condition of the exhibits.  They’re sparkling clean and appear to be in mint condition.  We were told that all the aircraft and vehicles are operational.  That’s not the case at the other museums I mentioned above.  The museum itself is spotless.

The other thing I liked was the free guided tour we received from a volunteer docent.  This gentleman guided Bill and I through the collection, told interesting stories and answered our questions.  We were there on a weekday, so you won’t necessarily get your own private docent if you visit on a busier day.  Instead, one-hour guided tours are provided.

Plan on an hour to 1 ½ hours for your visit.

The museum and the entire collection is owned by Maj. General William Lyon (US Air Force, Retired).  He has personally flown all the aircraft.  General Lyon also was a big success in business, having founded Lyon Homes – one of the nation’s largest homebuilders.  He’s now in his 90s and visits the museum from time to time.

For more on General Lyon and the museum’s collection, go to www.lyonairmuseum.org.

To get to the museum, exit I-405 at Bristol St., then go south for ½ mile to Baker St.  Turn left onto Baker, which ends at Airway Ave.  Go across the intersection to what looks like an alley and continue straight.  That’s Ike Jones Rd.  Follow it around a 90-degree turn to its end, which is the museum’s parking lot. My Garmin GPS didn’t show it, but Siri knew the way.

Thanks for visiting Road Trips with Tom.  Next week’s post will be from the East Coast; subject TBA.

This week’s road trip takes us to Fort Scott END_OF_DOCUMENT_TOKEN_TO_BE_REPLACED

You can run out of adjectives really fast when describing END_OF_DOCUMENT_TOKEN_TO_BE_REPLACED