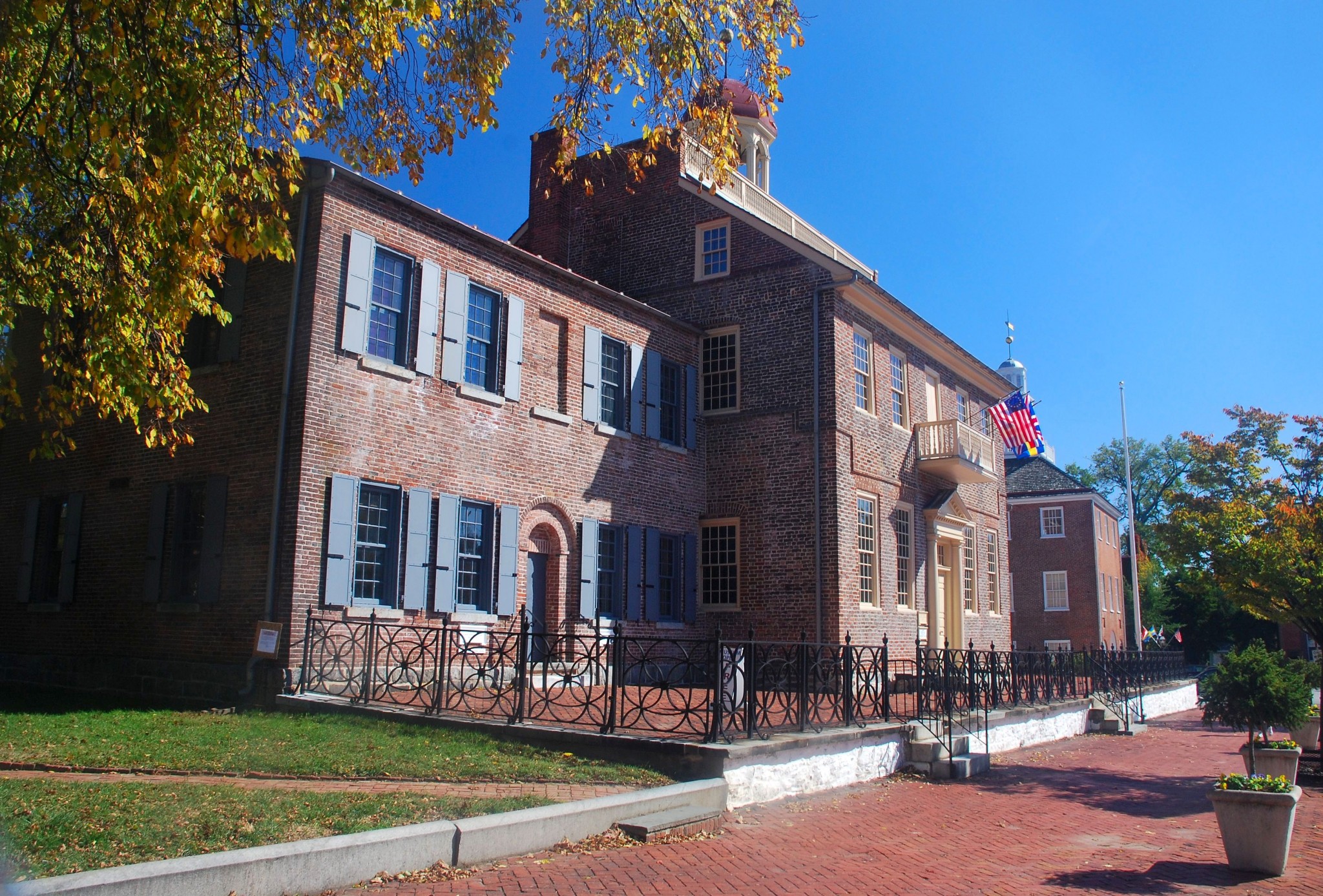 This week, Road Trips with Tom heads for the small colonial village of New Castle, Delaware.

Most people visiting Delaware see it from Interstate 95, which connects Philadelphia with Baltimore.  Or they arrive via the Delaware Memorial Bridge, which marks the southern end of the New Jersey Turnpike.  Either way, it takes less than 30 minutes to cross this tiny state.  They pass the forgettable city of Wilmington, a mall or two, and a couple of industrial zones before leaving Delaware for Maryland, Pennsylvania or New Jersey.

Most don’t realize that just a few miles off the busy interstate is something very special — the historic riverfront village of New Castle.  If Wilmington is Delaware’s economic heart and Dover its capital, New Castle is its soul.  This is where the key events in Delaware’s history played out during the 17th and 18th centuries.

New Castle is best reached from Interstate 295, the highway connecting I-95 with the Delaware Memorial Bridge.  Take the exit for SR 9, which is either the first or last Delaware exit, depending on which way you’re headed.  Follow SR 9 south a few miles.  Where Route 9 veers to the right, continue straight ahead on 6th St. – there’s a sign showing the way to the historic district.  Go three blocks, then turn left onto Delaware St.  Your destination is “The Green.”  In a few short blocks, you’ll be transported back in time nearly 300 years.

When you arrive at the stately courthouse – you can’t miss it – find a parking place and set off on foot.

New Castle’s history is very eventful and a bit complicated.  I’ll try to oversimplify it, in the hope you won’t get bored.  It was essentially a big game of “Capture the Flag.”

Delaware was first settled by the Dutch (and Swedes at the same time) back in the 1630s.  It was named for Thomas West, the 3rd Baron De La Warr, who was governor of Virginia from 1610 to 1618.  The first permanent settlement was along the Delaware River in 1651.  The Dutch named it Fort Casimir, but they didn’t have it for long.  It was taken over by a Swedish colony in 1654, but the Dutch took it back a year later and named it Nieuw Amstel.  That, in turn, was seized by the British in 1664, who changed the name to New Castle.

But wait:  There were more flag changes.  The Dutch reclaimed New Castle in 1673, only to lose it to the British a year later.  The monarchy conveyed the little colony to William Penn in 1675.  They were anxious to get rid of him and his annoying Quaker brethren, and figured that sending Penn to this remote outpost was an ideal way to put him out of sight and out of mind.  He arrived soon afterward and founded Philadelphia several miles upstream.

This transfer, however, was contested by Lord Baltimore (a.k.a. George Calvert, head of the Maryland colony), and a survey was commissioned to establish the boundary.  The surveyors were Mason and Dixon, and their boundary is still known as the Mason-Dixon Line.  The spire on New Castle’s courthouse was the center of a 12-mile arc marking the boundary.  You can see this arc if you look at a map of the state.

Enough history?  Not hardly.  It seems that the original Delaware settlers (Dutch, Swedes and English) found Penn’s Quaker colony a bit too strict.  They petitioned for separation, which was finally granted in 1704, making Delaware a separate colony, with New Castle as its capital.  This is where the Declaration of Independence was read in 1776 – three of its signers were from New Castle.  A year later, the capital was moved to Dover.  Later, Delaware became the first state to ratify the U.S. constitution, earning its nickname, “The First State,” which is on its license plates.

After losing the capital to Dover, New Castle’s economy floundered.  The town was too poor to build new structures and instead kept its existing buildings and fixed them up.  That’s to our benefit, because New Castle looks much the way it did more than 200 years ago.

Despite its crucial role in U.S. history, this river town of 5,000 people is a quiet place.  It’s not overly touristy – no zip lines, no mini-golf courses, water parks or other tacky tourist trash.  It’s the real deal, with a genuine aura of history.  Plan on 2-3 hours for your visit.

Your first objective is the courthouse.  This is (or will be) a key element of First State National Historic Park, a new National Park Service site that’s still under development.  Eventually, there will be an NPS visitor center next door at the Sheriff’s House.  For now, however, the courthouse is operated by the State of Delaware.

I was the only visitor on Tuesday afternoon, October 18.  An enthusiastic and remarkably well-prepared young woman gave me a personal tour.  The courtroom is the highlight (see accompanying photo).  It’s open 10-4:30 Tuesday-Saturday and 1:4:30 Sunday. There’s no admission charge, but you should leave a $5 per person donation.  Delaware has no sales tax, so you’re still getting a good deal here.  Be sure to grab a copy of the New Castle walking tour map.  You’ll also find a nice guide map on the interpretive sign in front of the courthouse.

There are a few other historic sites nearby.  Ask at the courthouse for details.

None of the web sites covering New Castle were particularly helpful, so I’m not going to waste your time by giving you a link.

Next, check out the George Read house a couple of blocks away (separate admission charged), the home of a wealthy citizen and a signer of the Declaration of Independence.  It was closed the day I was there.  Hours are Wednesday-Friday and Sunday, 11 to 4, Saturday 10 to 4.  It’s also closed from January to March.  Admission is $7 for adults, $6 for seniors and students, $4 for ages 6-12.

You’ll find some nice shops and galleries near the green, along with a couple of cafes.  Accommodations are easily found in the Wilmington area, just a few miles away.  I stayed at the Red Roof Inn near the University of Delaware in Newark; it was quite nice and good value.

Thanks for visiting Road Trips with Tom.  Join us again on Sunday, November 6, as we look at a very different historic perspective from the Oregon Trail in western Nebraska.

This week’s road trip takes us to Fort Scott END_OF_DOCUMENT_TOKEN_TO_BE_REPLACED

You can run out of adjectives really fast when describing END_OF_DOCUMENT_TOKEN_TO_BE_REPLACED