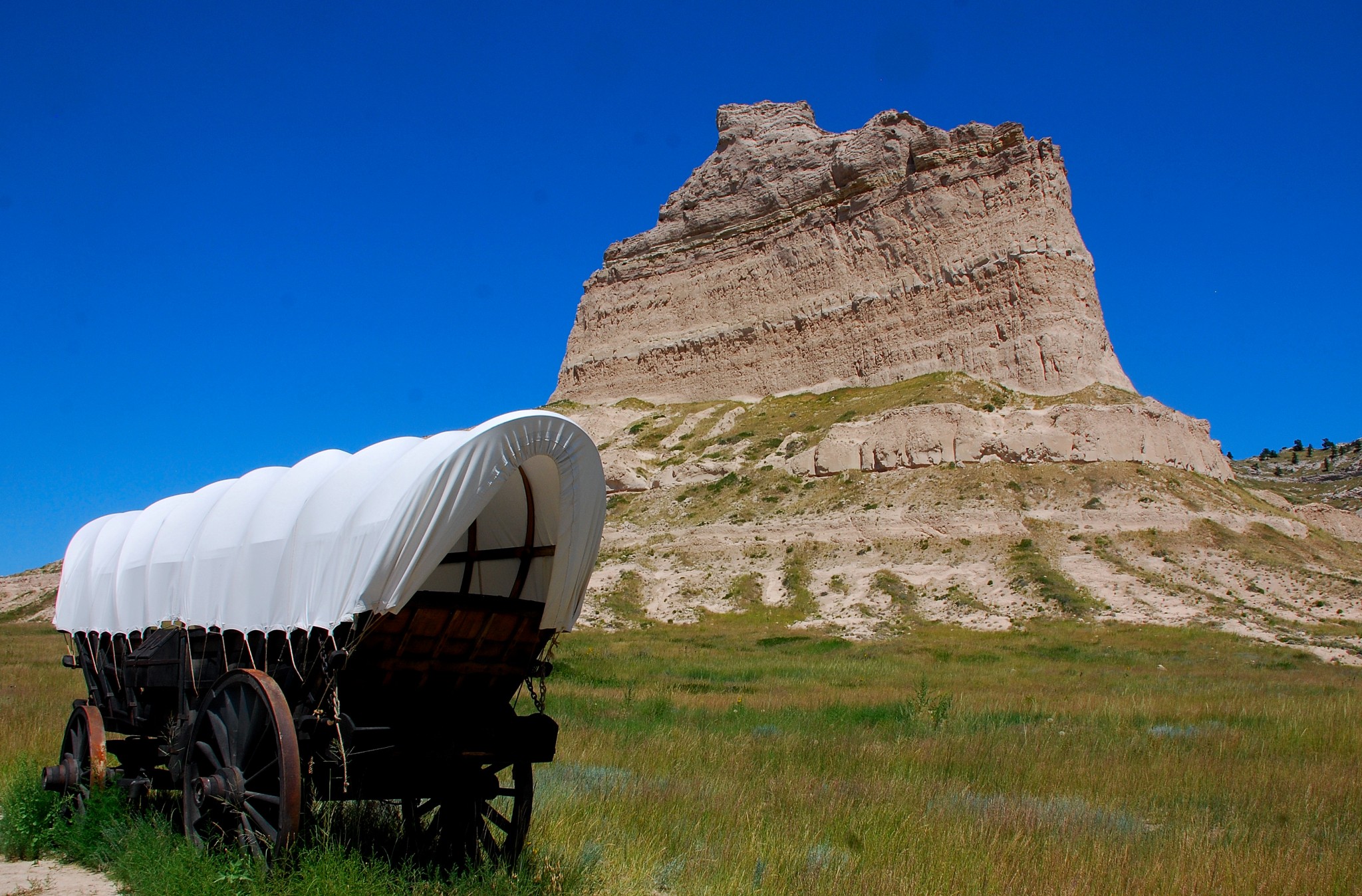 This week Road Trips with Tom follows the route of the Oregon Trail as it crosses what is now Nebraska.  Specifically, we’ll be traveling west from North Platte, Nebraska, to Fort Laramie, Wyoming — a distance of 230 miles.  While that’s an easy day’s drive, you should plan two days, including stops along the way.

Consider this:  It’s the 1840s.  You’re a farmer in the Midwest.  Would you walk away from the life you know and travel over 2,000 miles on foot or in a wagon to a place you’ve never seen in the hopes of finding a better life?

Between 1843 and the Civil War, over 400,000 people did just that.  They included pioneers headed for Oregon, gold-seekers going to California, and Mormons escaping persecution for a haven in Utah.

The Oregon Trail has a fascinating history.  Of course, this is a road trips blog, so I’ll give you just enough historical background to provide a context for your travels.  It will help you visualize the past as you whoosh along at 60 mph on a two-lane asphalt ribbon through country that looks decidedly different from what the pioneers saw 160-some years ago as they traveled at a walking speed.  For them, every creek crossing and small hill was an adventure.

If you’d like a detailed summary of the Oregon Trail’s history, go to Google, type “Oregon Trail” in the search box, then open the Wikipedia Oregon Trail article.

Lewis and Clark’s epic voyage of discovery ended in 1806.  Within a few short years, hundreds of fur trappers working for John Jacob Astor’s Pacific Fur Company headed west, thoroughly exploring the territory and identifying the best routes.  They included such famous names as Kit Carson, Jedediah Smith and Jim Bridger.  These mountain men trapped on just about every stream that might hold beavers, so they could satisfy the demand for beaver hats in the East and Europe.  This lasted until about 1840, when beaver hats went out of fashion.  By then, thanks to the trappers’ reports, people in what was then the United States knew what was out West and how to get there.

The main reason settlers didn’t follow during this period was uncertainty over who owned what’s now the Pacific Northwest.  After the War of 1812, the U.S. and Great Britain decided on joint ownership and agreed to figure out the details at some future date.  The Brits lost interest when the fur trade declined and signed a treaty that moved the boundary north to its present location on the 49th parallel.  Not long afterward, Congress passed an act offering free land to settlers who traveled to Oregon.

Free land for the taking

Meanwhile, the U.S. in the late 1830s was in an economic depression.  By 1841 word had reached the United States that a viable route to Oregon existed.  Oregon was ideal:  Free land for the taking, fertile soil, ample water and forests.  Folks in the Midwest heard the stories and asked “Why not?”

Thus, starting in 1843, began the largest internal migration in U.S. history, abetted and intensified by the California Gold Rush in 1849.  By 1869 over 400,000 pioneers had set out overland along the Oregon Trail on a journey over 2,000 miles long and fraught with hardships.  The trail was difficult. Wagons broke in the arid climate.  Horses and oxen wore out.  Cholera epidemics claimed as many as 10 percent of the emigrants.  Possessions had to be discarded.  While pioneers feared Indian attacks, those were very rare.

Despite the hardships, by 1852, the peak year on the trail, there was an unending flow of travelers.

Beginning in 1847, Mormons fleeing persecution joined the exodus, following Brigham Young to Utah.  They were better organized than the other traveling parties, building bridges and making trail improvements for those who followed.  Some of the Mormons were so poor they couldn’t afford wagons and pushed hand carts all the way to the Salt Lake Valley.

So there were three trails following the North Platte in Nebraska — the Oregon Trail, California Trail and Mormon Trail.

Independence, Missouri, was the main jumping-off point for the trail, but it wasn’t the only one.  In reality, though, the real starting point was a dinner table in Illinois, a front porch in Iowa or maybe a general store in Wisconsin.   In those places, people made the momentous decision to walk away from the life they knew and risk everything on a new life out west.  It was a decision that required a huge amount of courage and determination.

The various trails converged in Nebraska and followed the Platte River, and later the North Platte, into what is now Wyoming.  There, the Oregon, Mormon and California Trails split up and went their separate ways.

North Platte is home to the world’s largest rail yard, the Bailey Yard.  Be sure to visit the Golden Spike Tower and visitor center at 1249 N. Homestead Rd.  From I-80, take Exit 177 north.  Turn left onto A St., then right on Homestead.  There are directional signs along the way.  What does a railroad yard have to do with the Oregon Trail?  It was the completion of the first transcontinental railroad in the 1870s that put an end to the trail.

Leaving North Platte, drive 50 miles west on I-80 to Ogallala, the starting point of US 26, which you’ll be following for most of this road trip.  You’ll be driving westward, crossing the North Platte at Lewellen and again at Northport.  This is typical Nebraska pasture and farm country.  Eventually, you’ll begin to see low, chalk-colored bluffs on both sides of the valley.  Then, after crossing the river at Northport, you begin to see a unique landform – Chimney Rock – a solitary formation with a sharp spire pointing skyward.  This was a major landmark on the Oregon Trail.  Of course, the pioneers were traveling only a few miles a day, so Chimney Rock was in view for days before they arrived at its base.  For them, it signified the transition from the Great Plains to the rugged west.

Take the signed turnoff for the Chimney Rock visitor center.  Even though Chimney Rock is a national historic site, it’s managed by the Nebraska State Historical Society, which charges $3 admission.  The center, which has exhibits and a film on the Oregon Trail, is open 9-5 daily.  You can see what there is to see in 30-40 minutes.  Web site:  www.nebraskahistory.org/sites/rock/

SIDEBAR:  Northport, where you turned left to cross the North Platte, is the junction with US 385, which leads 34 miles north to the town of Alliance.  Just outside Alliance on SR 87 is one of America’s most amazing pieces of offbeat roadside art – Carhenge.  This is a must-see for anyone interested in cars.  If you’ve never been there, this may be your closest opportunity.

We now return to the 19th century and the Oregon Trail.

Back on US 26, you’ll soon arrive at a junction.  Turn there onto SR 92 and follow it 17 miles into Gering.  Where SR 92 turns off at an overpass, continue straight on M St. through the town.  Soon you’ll see a massive formation rising to the west.  This is Scotts Bluff.  M St. takes you right into Scotts Bluff National Monument.

The monument has a visitor center with the usual video, plus exhibits on the Oregon Trail.  It also has a road (not for RVs) that climbs to the top of the bluff, offering tremendous views of the Platte River Valley.  Just past the visitor center entrance, the main road passes between Scotts Bluff and another formation to your left.  This is Mitchell Pass, where the Oregon Trail bypassed a section in which Scotts Bluff crowds the banks of the North Platte.

The monument and visitor center are open 8-7 daily in summer and 8-5 the rest of the year.  The summit road closes 30 minutes earlier.  The entrance fee is $5 per car, $3 for motorcycles.  The monument’s web site is found at www.nps.gov/scbl

Follow signs to US 26, then continue westward through Mitchell and Morrill into Wyoming.  Thirty miles past the border is Fort Laramie National Historic Site.  Fort Laramie was built in the 1830s to serve the fur trade, then became an important supply point for the Oregon, California and Mormon Trails.

The park grounds are open daily from sunrise to sunset.  Stop first at the visitor center, open 9-7 from Memorial Day to Labor Day and 8:30-4:30 the rest of the year.  Admission to the site is free.

You can easily spend a couple of hours wandering the grounds.  In summer, you’ll see costumed interpreters, and rangers lead guided tours and give presentations on the fort.  Fort Laramie NHS has an excellent web site containing the entire park brochure, plus a link to a very cool virtual tour. Go to www.nps.gov/fola

The total length of this road trip is about 230 miles.  If you want to split it into two days, the city of Scottsbluff is the best place to spend the night.  This area doesn’t get crowded, so the season is spring through fall.  In fact, summer is probably the best time for this trip.  That’s when you’ll find living history demonstrations and other ranger programs at Scotts Bluff and Fort Laramie.

Thanks for visiting Road Trips with Tom.  Next week we’re off to the legendary Comstock Lode mining town of Virginia City, Nevada, where a good time can be had by all.  Happy traveling!

This week’s road trip takes us to Fort Scott END_OF_DOCUMENT_TOKEN_TO_BE_REPLACED

You can run out of adjectives really fast when describing END_OF_DOCUMENT_TOKEN_TO_BE_REPLACED