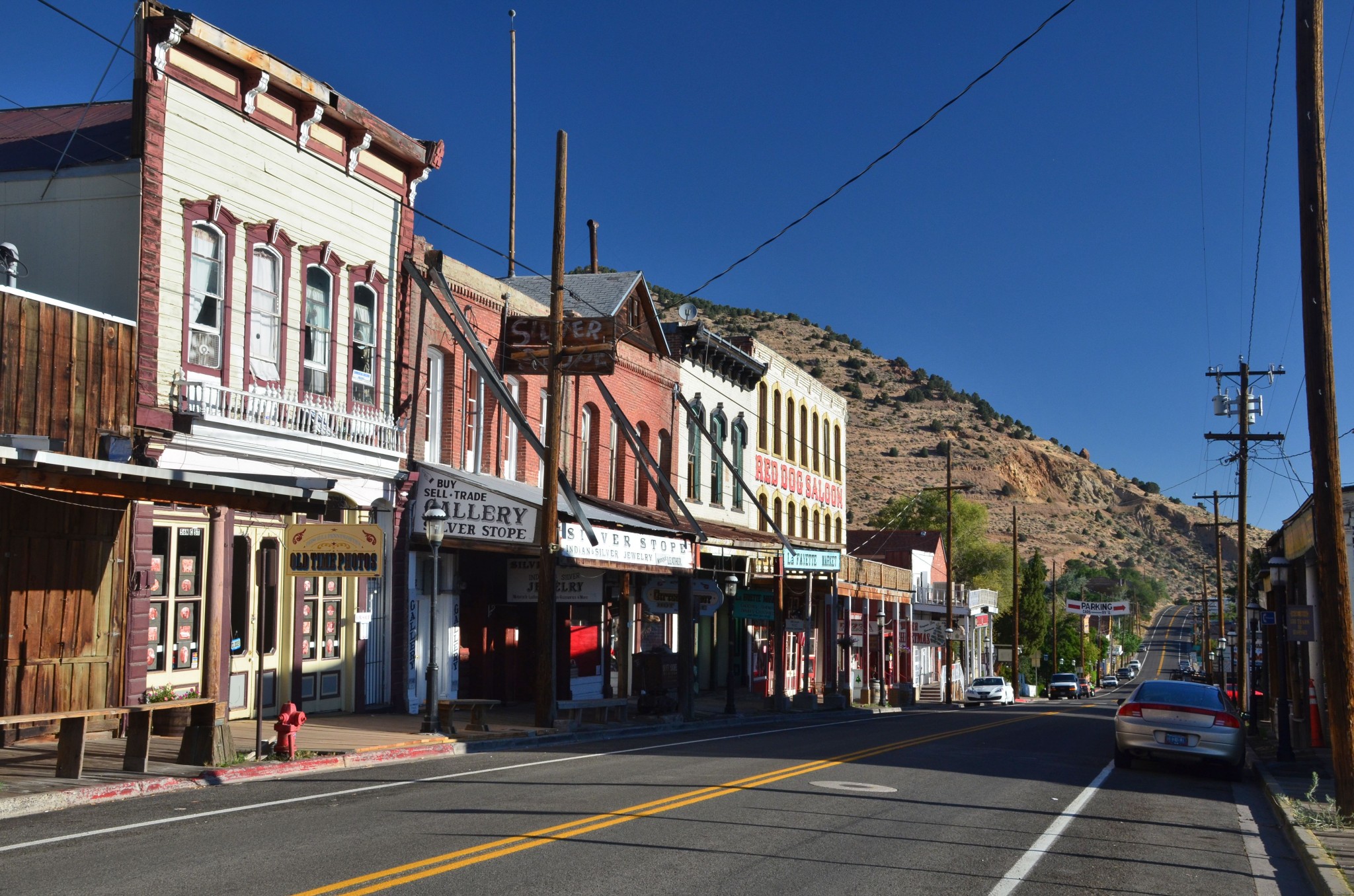 Historically authentic, cultured, outrageously commercial, gaudy, tacky, an Old West theme park – Virginia City is all of those things.  It brings to mind the line from a Jackson Browne song:  “I could be just around the corner from heaven or a mile from hell.”

It’s also a fun place to visit that attracts over 2 million tourists each year.

There are lots of mining boomtowns in the West that thrived when their mines were producing then died when the mines petered out.  A few survived the inevitable bust as shadows of what they once were.  Virginia City is one.  Thanks to its commercial façade, it’s thriving as a tourist destination.  You might call it a parody of itself.

Unlike places like Tonopah, Bodie and Columbia, Virginia City is less than an hour’s drive from a major city (Reno) and the country’s most popular alpine resort (Lake Tahoe).  Since it’s in Nevada, it also offers legalized gambling.  Two things you’ll find aplenty here – slot machines and silly T-shirts.  You’re never more than 100 feet from either as you stroll down the covered boardwalks along C St.  Just down the hill on US 50 is the brothel featured in HBO’s “Cathouse” series.

They mined for gold and found silver

Virginia City is precariously perched on the slopes of Mt. Davidson at 6,200 feet.  Back in the 1850s, this area had been thoroughly explored by miners looking for gold.  They found bits here and there, but nothing spectacular.  The miners kept getting bogged down by blue-gray mud that seriously impeded their work.  One miner carried a chunk of this stuff to Placerville in California and had it assayed.  The mud was found to contain $3,000 per ton in silver.

The rush was on.  The boom had begun.  Virginia City became the largest, richest mining town in U.S. history.  It propelled Nevada to statehood and helped finance the Civil War.  During its heyday, Virginia City’s mines generated more income than the entire California Gold Rush!  By 1864, Nevada was admitted to the union and is still known as “The Silver State.”

The Comstock Lode, as it was called, was the nation’s first major silver discovery.  Miners dug furiously to extract the riches.  Unfortunately, the mines soon outgrew the technology available available at the time.  By 1861, the problem was solved, and the Comstock silver mines were being worked at unheard-of depths.  Virginia City became an incubator of technology that revolutionized mining.

Miners who arrived penniless became millionaires.  Even richer were the stock swindlers who manipulated the claims.  It’s been said that the Comstock was “owned” three or four times over.  The newly wealthy transformed the rustic (to say the least) mining camps into the most important city between Denver and San Francisco.  The population was over 25,000.  The silver millionaires built mansions, churches, schools, opera houses and hospitals.  The Virginia and Truckee Railroad was built to carry ore to Carson City.  From 1862 to 1864, Samuel Clemens wrote for the Territorial Enterprise and adopted his nom de plume of “Mark Twain.”  One of his famous quotes was “Even the devil would be homesick in Nevada.”

By the early 1870s, it appeared the Comstock was running out of silver.  However, in 1873, the Consolidated Virginia Mine, operating 1,200 feet below the surface, hit what was named the “Big Bonanza,” an even bigger and richer body of silver ore.  By 1876, Nevada was producing over half the precious metals in the United States, and most of that came from Virginia City.

Thus, when a huge fire burned the downtown in 1875, the Big Bonanza’s money financed the rebuilding, creating the framework for what you see today.  By around 1879, it was pretty much over, and Virginia City was left to wither and die.  But it didn’t.  Enough minor discoveries kept the town alive until the 1930s.  After World War II, someone hit on the idea of luring tourists here, perhaps inspired by P.T. Barnum’s quote, “Nobody ever went broke underestimating the taste of the American people.”

Where the Cartwrights went to town

The success of the TV series “Bonanza,” which was set nearby, contributed to Virginia City’s popularity.  This is where Ben, Adam, Hoss, Little Joe and Hop Sing headed when they “went into town.”

Earlier, I referred to Virginia City as “an Old West theme park.”  That’s not entirely true.  People live here – several hundred of them.  Virginia City is still the seat of Storey County.  The population has remained steady for several decades.

To get to Virginia City from Reno, follow I-580 south to Exit 57B, then take SR 341, also known as the Geiger Grade.  This is a steep, twisty road not recommended for RVs.  From Lake Tahoe, take US 50 to Carson City, then continue east to the southern junction with SR 341.  At the junction with SR 342, bear right if you’re driving an oversized vehicle; stay left to go through the interesting mining towns of Silver City and Gold Hill.  Driving time is about 45 minutes from Reno and an hour from Tahoe.

There are some good internet resources to help you prepare for your visit to Virginia City.  The local tourist commission’s site is www.visitvirginiacitynv.com.  This site has links to many of the town’s attractions.  Also, I liked www.gonewiththewynns.com/virginia-city-nv — a site containing an enjoyable homemade video.

I recommend you plan to arrive early in the day, especially in summer.  That will land you a decent parking space, along with a chance to stroll along C St. to preview the shops and saloons, most of which open at 10.  Allow at least half a day here; a full day would be even better.

What’s there to do in Virginia City?  Actually, there are way too many attractions to list here.  Check out the tourist commission web site for listings and links.  You should also stop at the Virginia City Visitor Center at 86 S. C St.; open 9-5 daily.

Here are a few of the highlights:

Then there’s shopping.  Rodeo Drive this ain’t.  But if you look hard enough, you can find some interesting items among the kitsch.  All the shops are on C St., as are places selling fudge, candy and ice cream.

What about accommodations?  You’ll find a couple of motels and B&Bs in Virginia City, but the selection is much better in Carson City, just down the hill.  There are plenty of places for lunch in Virginia City.

Thanks for visiting Road Trips with Tom.  On Sunday, November 20, we’ll take you to western Maryland, site of the Civil War’s bloodiest battlefield — Antietam.

Welcome to Benefit Street – the most impressive neighborhood of END_OF_DOCUMENT_TOKEN_TO_BE_REPLACED

This week, Road Trips with Tom steams down the mighty END_OF_DOCUMENT_TOKEN_TO_BE_REPLACED