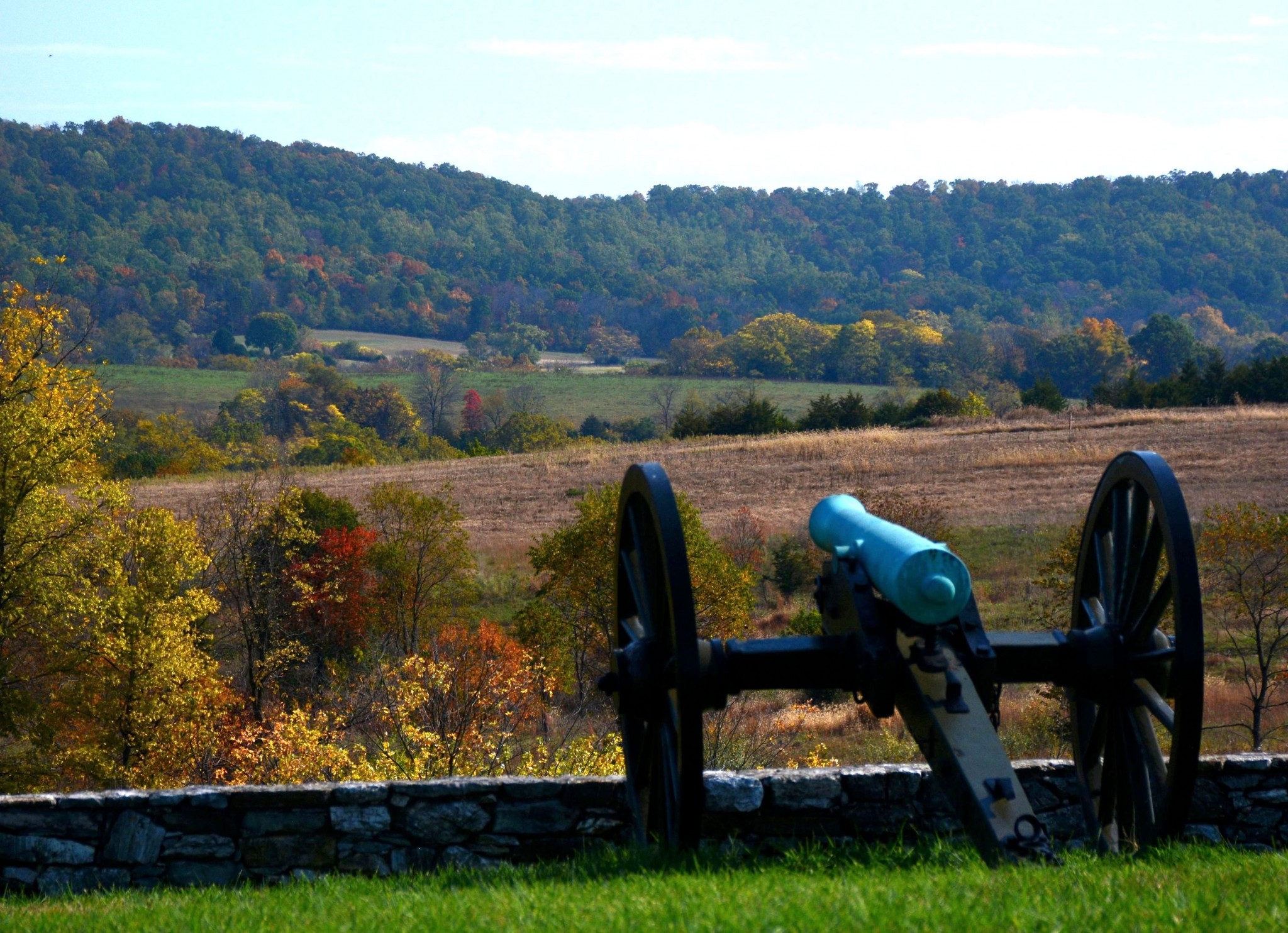 In this week’s post, you’ll join Road Trips with Tom as we visit the historic village of Sharpsburg, Maryland.  Sharpsburg is nestled in a valley between the Blue Ridge and the Potomac River, midway between Frederick and Hagerstown.

The countryside here is beautiful and bucolic, as you can see in the accompanying photos.  Some were taken last month and others in May 2009, offering you glimpses of the area in both fall and spring.

The village was founded in 1763, but we’re here because of what happened 99 years later.  This was the site of the bloodiest one-day battle of the Civil War — the battle of Antietam.  It was named for the creek that meanders through the valley. Today, it’s known as Antietam National Battlefield and managed as a national park.

A bucolic background for a bloody battle

My last visit to a Civil War battlefield was at Vicksburg, Mississippi.  There, I was able to mentally visualize, hear and even smell what that battle must have been like.  Antietam, which I visited in mid-October, was different for me.  I found it hard to separate the beauty of the Maryland countryside from the events that took place September 17, 1862.  It was incongruous to consider Americans killing other Americans in a peaceful setting like this.

Here, the monuments commemorating the battle are superimposed on an area that otherwise is relatively little changed from over 200 years ago.  Most of the farms and structures you pass on the self-driving battlefield tour were already here when the Confederate and Union armies bloodied each other.  In fact, many of the homes were appropriated by the armies.  They served as headquarters for the generals leading their troops into harm’s way.

I’m reminded of the line by the late comedian Redd Foxx, who served in World War II.  He said he ran when people started shooting at him.  “I ran so far back, I ran into a general!”

Like other battlefield parks, Antietam offers details on battle strategies and troop movements.  You know, like General X was over here, and he attacked General Y’s flank, and so on. If those details interest you, you’ll find plenty of explanatory signs, plaques and diagrams. Frankly, I’m much more interested on why the battle took place here in Maryland and how it affected the larger picture of the Civil War.  The one detail that shouts out to me is that nearly 23,000 soldiers died on that September day.

After the Confederate Army won a victory at Manassas, Virginia, Jefferson Davis and Gen. Robert E. Lee decided to push northward into Union territory.  Their targets were Maryland and eventually Pennsylvania.  Their hope was to convince England and France to formally recognize the Confederacy as a legitimate nation.  In addition, the rebels had pretty much exhausted the available supplies in Virginia.  They either had to move north into Maryland or retreat.  Lee divided his army in half, with one part, led by Thomas “Stonewall” Jackson successfully capturing the Union garrison at Harpers Ferry.  President Lincoln ordered Gen. George McClellan to block the invasion.

At Sharpsburg, Lee’s forces had their backs to the Potomac, while the Union troops stationed themselves across Antietam Creek on the east side of the valley.  The two armies then went at it for 12 straight hours.  Although the battle was tactically inconclusive, the next day Lee withdrew his army into Virginia. Lincoln used this opportunity to issue the Emancipation Proclamation.  Two months later, he sacked McClellan for dithering instead of pursuing Lee into Virginia.  McClellan also mismanaged his command by failing to provide the overall battle strategy to his commanders.

Antietam Battlefield is only about a 1½-hour drive from either Washington or Baltimore.  From the Maryland cities of Frederick or Hagerstown, both of which are on I-70, take US 40 Alternate to Boonsboro, then turn west on SR 34 to Sharpsburg.  The visitor center is on SR 65 just north of the village.

The park grounds are open daily during daylight hours.  The visitor center, which is open 9-5 daily, offers exhibits, displays, a gift shop, and a 26-minute film narrated by James Earl Jones.  Rangers offer interpretive talks daily – more frequently during the summer.  The park entry fee is $5 per person (16 or older) or $10 per vehicle.  A map of the self-driving tour is in the brochure you get when you pay your fee.  It’s also on the National Park Service’s web site, which you’ll find at www.nps.gov/anti.  The web site also offers lots of details on the battle itself.

Be sure to allow time for a leisurely drive through the battlefield site.  There are 10 marked stops, with interpretive exhibits along the way.  One stop is an observation tower offering a tremendous view of the battlefield and the valley.  A highlight for me were the historic farms along the way.  Another highlight is the Burnside Bridge, where Union Gen. Ambrose Burnside fumbled an opportunity for a decisive victory.  The bridge is currently under reconstruction, but the work should be completed in early 2017.

The road is open to and ideal for bicycling.  You can also fish in Antietam Creek provided you have a Maryland license and stay at least 500 feet from the Burnside Bridge.  The park has 10 hiking trails.  Details are on the park’s web site (look under “Things to Do” >> Outdoor Activities).  The tour road crosses SR 34 just beyond the observation tower.  Two additional sites of interest are available if you make short detours at this point.  To your left, you’ll find a turnoff for the beautiful Pry House, which was commandeered by the Union Army as McClellan’s headquarters and as a field hospital; it’s now a medical museum.  To the right is Antietam National Cemetery.

After Stop 10, the tour road comes to a T-intersection at Harpers Ferry Road.  A left turn here will take you in 12 miles to US 340, just west of the entrance to Harpers Ferry National Historic Park, also worth a visit.  You can easily visit both parks in a single day.  You’ll find a good choice of accommodations in either Frederick or Hagerstown, and food is available in Sharpsburg, Boonsboro or Harpers Ferry.

Because of its proximity to major cities, Antietam’s visitation spikes on weekends.  If you must visit in summer or on a weekend, plan on getting there early.

Thanks for visiting Road Trips with Tom.  On Sunday, November 27, we’ll head back to the West Coast to visit the cool small town of Astoria, Oregon.  Until then, happy road-tripping!

Welcome to Benefit Street – the most impressive neighborhood of END_OF_DOCUMENT_TOKEN_TO_BE_REPLACED

This week, Road Trips with Tom steams down the mighty END_OF_DOCUMENT_TOKEN_TO_BE_REPLACED