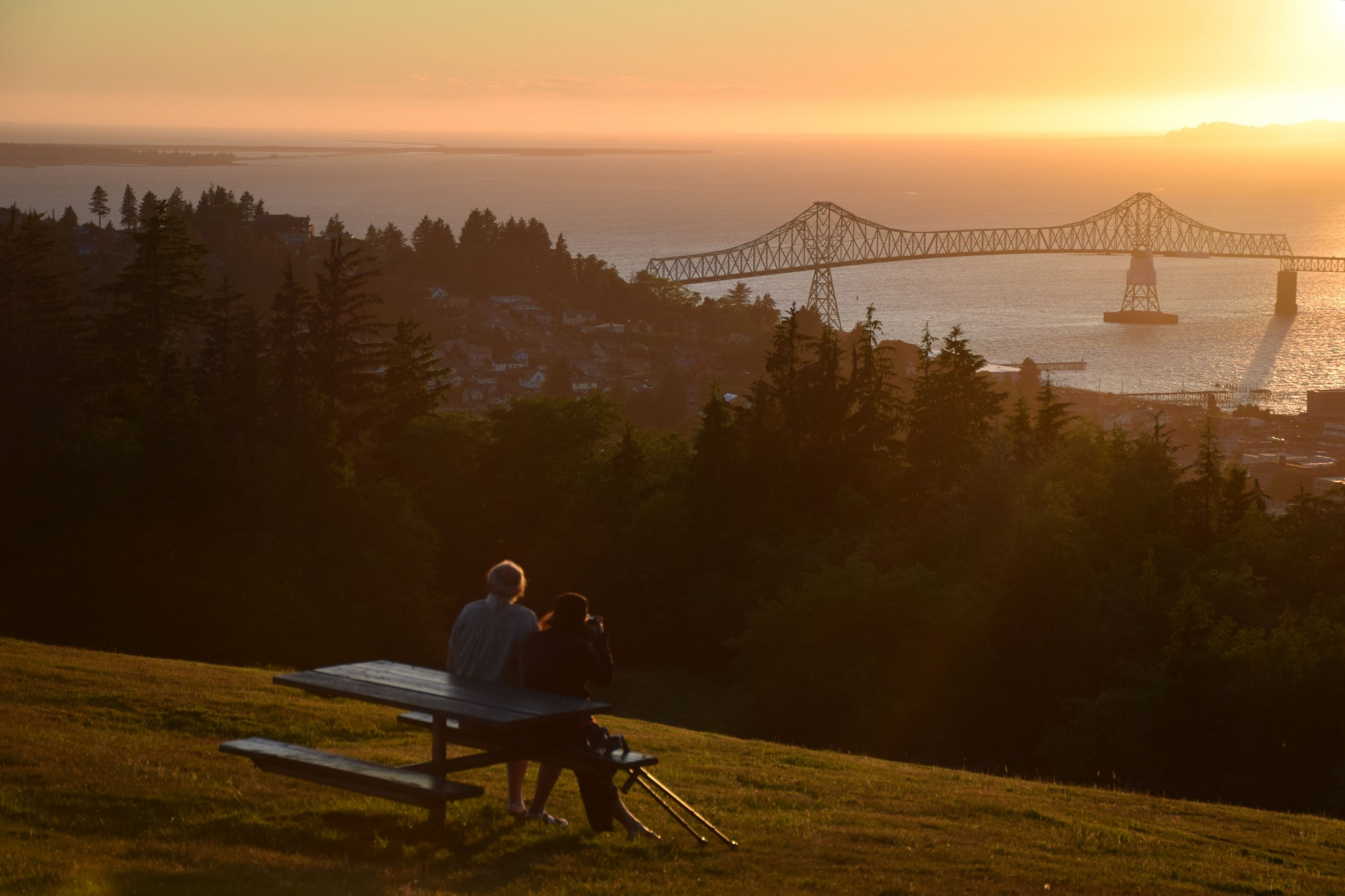 If you look at a map of Oregon, you’ll find Astoria in the upper left-hand corner.  You might logically assume it’s a beach town.  After all, you can clearly see the Pacific Ocean on the horizon in the photo above.

And you’d be wrong.

Astoria is a river town, located just upstream from where the West’s biggest river, the Columbia, finds the ocean.  It’s also close to the point where Lewis and Clark ended their epic journey to the Pacific and spent the winter of 1804-05.  Just six years later, John Jacob Astor’s Pacific Fur Company established a fur trading post here, making Astoria the first permanent non-native settlement on the Pacific Coast and the oldest town in Oregon.

Tourism is a moneymaker these days, but Astoria isn’t what you’d call a resort.  It’s always risen and fallen with a resource-based economy based on fishing, lumbering and shipping.  The fur trade went away when beaver hats went out of style in the 1840s.  Salmon fishing became a mainstay in the mid-19th century, attracting Nordic immigrants who worked on the fishing boats and Chinese immigrants who worked in the 30-odd canneries.  At one point, the population was 22 percent Chinese.

The last cannery closed in 1980, and you’d be hard pressed to find a decent Chinese restaurant here.  Lumbering was big, too, but the last plywood mill (the city’s biggest employer) closed in 1989.  The port has also declined.  From Astoria’s riverfront, you can watch the big cargo ships steaming upstream to Portland.  The railroads discontinued service to Astoria in 1996.

What’s left is a town of 9,500 people – less than half what it was at its peak.    Despite its spectacular setting, Astoria at its heart is a gritty riverfront town that’s clearly seen better days.  There’s nothing cute or quaint about it.  Lately, though, it’s become something of an art center, and the town is working very hard to be hip.  And unemployment is actually a bit less than the national average.

A plethora of pier pilings

There’s a lot to see and do here – enough to hold your interest for a day or two, provided the weather cooperates.  That’s a big if, because Astoria’s weather is awful for much of the year.  Temperatures are mild, but it rains 191 days per year, on the average.  Humidity is high.  Cloud cover is omnipresent, and the wind can howl up and down the Columbia.  During Lewis and Clark’s four-month stay, it rained every day except three.

I visited Astoria on a spectacular sunny Saturday in mid-June of this year.  On the drive from Portland Airport I had great views of Mts. Hood, St. Helens and Rainier.  Little did I know that was the only day on my weeklong trip those peaks weren’t hiding behind clouds.  The photos you see in this post were taken on that sunny Saturday and on the next morning, which was overcast but pleasant.

My impression is that Astoria has three tiers.  First is the riverfront, which has a plethora of picturesque pier pilings, warehouses, a terrific museum and a wood-plank trail that’s popular with walkers and bicyclists.  There’s even a hotel in a converted salmon cannery.

A few blocks south is the slightly seedy downtown area, where dive bars and tattoo parlors are intermixed with a sprinkling of very nice art galleries.  This being the Northwest, espresso kiosks are everywhere.  At the west end of town, the graceful Astoria-Megler Bridge carries US 101 across the Columbia into Washington.

What’s there to see and do in Astoria?

Here are four must-see places you can visit in a day.  For more, visit www.travelastoria.com

Getting to Astoria is easy.  If you’re driving on US 101, turn right on US 30, which is the city’s main drag.  From Portland and I-5, take US 30 west for about 1 ½ hours.  Portland has the nearest commercial airport.

Accommodations are plentiful.  They fill up on weekends from spring to fall, and they can be expensive.  Make reservations well in advance if you’ll be visiting Astoria on a summer weekend.  In winter . . . well, don’t come then, unless you like nonstop rain.

Ever eat in a Bosnian restaurant?  Me neither, at least until I visited Astoria.  There aren’t many in this country, but there’s one in Astoria.  It’s called Drina Daisy, and it’s in a nondescript storefront at 915 Commercial St. in the downtown area.  I loved it!  They have a tomato salad that’s one of the best things I’ve ever eaten; I also had a beef goulash-type dish.  Highly recommended.

Thanks for visiting Road Trips with Tom.  On November 27, we’re headed underground to Mammoth Cave National Park in Kentucky.  Until then, happy traveling!

This week’s road trip takes us to Fort Scott END_OF_DOCUMENT_TOKEN_TO_BE_REPLACED

You can run out of adjectives really fast when describing END_OF_DOCUMENT_TOKEN_TO_BE_REPLACED