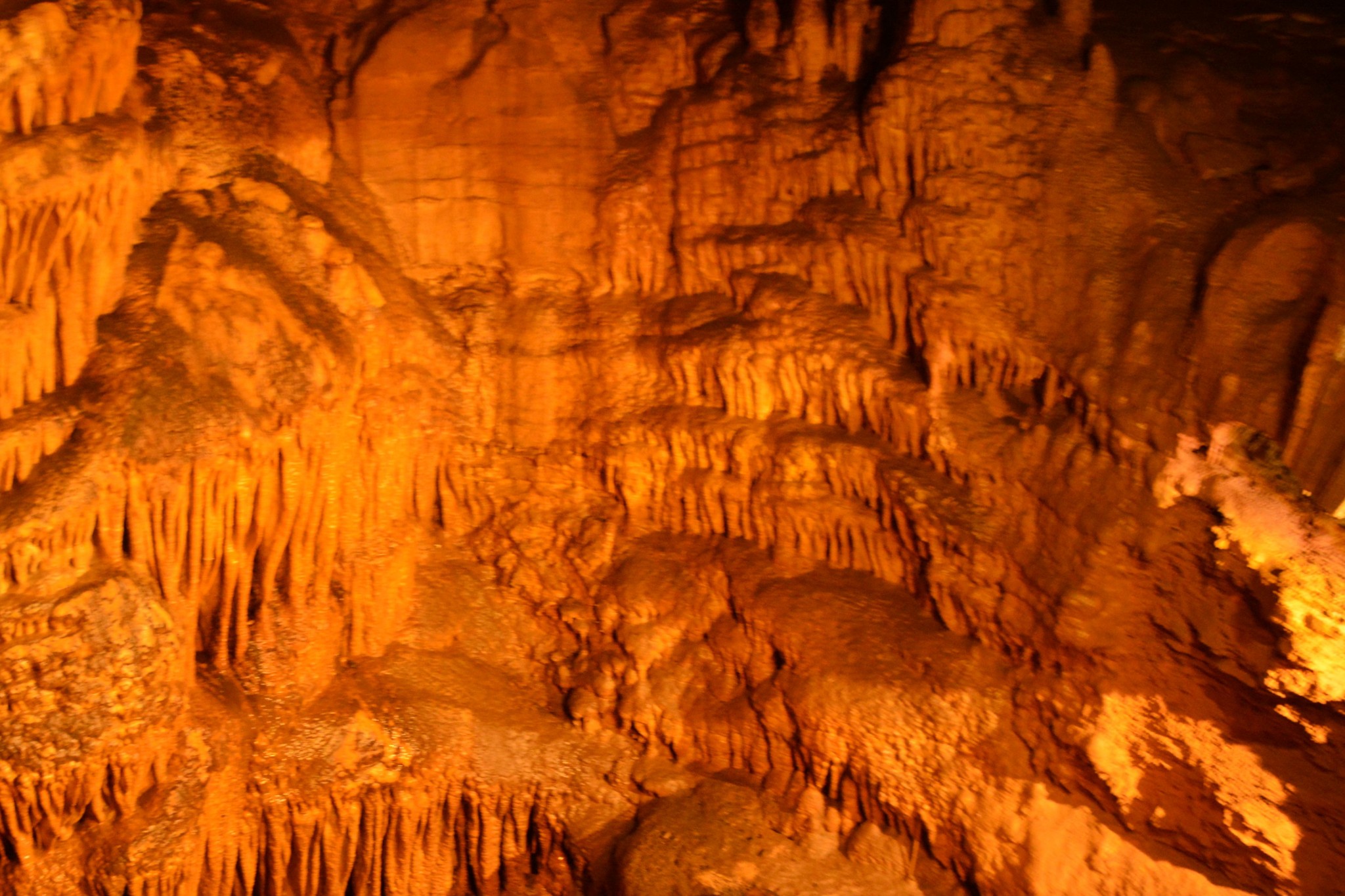 This week Road Trips with Tom becomes an underground publication as we take you to Kentucky’s Mammoth Cave National Park.

Mammoth Cave is the world’s largest cave system, with 408 miles of mapped passageways.  It’s more than twice as big as the second-largest cave.  Mammoth Cave is still being explored, and more passages are being discovered just about every year.

It’s located just off I-65, about halfway between Nashville, Tenn., and Louisville, Ky.  If you’re on an east-west road trip on I-40 or I-64, it’s about a 90-mile detour.  You’ll find plenty of visitor services in the area – I’ll provide details near the end of this post.

Most people visiting Mammoth Cave stop at the visitor center and take one of the several ranger-guided cave tours.  Figure on at least half a day in the park.  By taking additional tours or hiking some of the park’s 70 miles of trails, you can easily stretch your visit to a full day or longer.

I made my first visit to Mammoth Cave in late October.  Having made several visits to Carlsbad Caverns in New Mexico, I used that as a point of comparison.  To me, there are four major differences:  First, Carlsbad’s cave formations are more spectacular, although Mammoth Cave’s are impressive.  Second, the countryside in and around Mammoth Cave National Park is more attractive and inviting.  It’s in a forested area, whereas Carlsbad Caverns is in the downright homely Chihuahuan Desert.  Third, Mammoth Cave is easier to get to and offers more services for visitors.  And fourth, you can only enter Mammoth Cave on a guided tour, whereas you can visit Carlsbad Caverns at your own pace without a ranger.  I recommend you have both on your road trip bucket list.

Don’t step in the sinkhole

Like most large caverns, Mammoth Cave was formed in limestone.  The limestone was deposited some 350 million years ago when this was a shallow sea.  Next, mud settled above that layer and eventually turned into sandstone and shale, which acted as an umbrella that prevented the limestone from dissolving.

The park sits on a plateau that’s what geologists call karst topography.  Instead of flowing into streams, water creates sinkholes, which act as leaks in the sandstone/shale layer.  The water then erodes the limestone below, creating caverns.  There are about 10,000 sinkholes in Mammoth Cave National Park, most of which are small and hardly noticeable.

Okay, enough geology.  You’re much more interested in actually seeing the cave.  The National Park Service offers a menu of tours, which vary in how long, how strenuous and how expensive they are.  The full menu is on tap in summer, when over half the park’s annual visitation occurs.  For my late October visit, there were five tours being offered.  Only three are available in winter.

The park’s website only lists the current schedule, so be sure to check before you head there.  Go to www.nps.gov/maca.  You can find a list of all tours (with prices) by following this path:  Plan Your Visit >> Basic Information >> Fees and passes.

I had a flight home out of Louisville later the day of my visit, so I took the first tour on the schedule – Frozen Niagara.  This is the best tour for families, seniors (like me) and people who want a relatively quick tour that takes in some of the cave’s best underground scenery.  It involves about 1/4 mile of walking, plus some stair climbing.  The Frozen Niagara formation is made of flowstone, which was formed when mineral-rich water flowed across a limestone surface.  This tour costs $13 for adults, $9 for “youth” (age range not given) and $6.50 for old geezers like me with a senior pass.  Duration is about 75 minutes, including a 10-minute bus ride to and from the entrance.

A big bump on the head

Mammoth Cave isn’t especially friendly to photographers.  Neither tripods nor flash is permitted, and the cave’s lighting is fairly dim.  I’d met a professional photographer a few days earlier, who suggested I push the camera’s ISO (sensitivity to light) from the default setting of 100 to 1600.  It sort of worked, although, as you can see, my cave photos aren’t as sharp as I’d like.  This also means you can’t photograph Mammoth Cave with your cell phone.

In addition to some fairly fuzzy photos, I got a bonus souvenir.  The roof of the passageway we used was low in places, and I bumped my head . . . hard.  I was bleeding when we returned to the bus.  Luckily, I carry a first aid kit in my laptop case.  But I still, more than a month later, have a bump on my head.  And, no, it didn’t make me smart.  When you go, please be sure to duck when the ceiling is low.

All tours originate at the visitor center.  You can make reservations, which are a good idea if you’ll be coming during a busy time of year.  From the NPS web site, follow this path to get the reservations link:  Plan Your Visit >> Basic Information >> Permits and Reservations.  I made a reservation for my tour on October 24, but I didn’t need it.  Tickets are available the day of your tour on a first-come, first-served basis.  Even if you reserve a tour, you must go to the visitor center to pick up your tickets.

While there, allow extra time to check out the exhibits.  This is one of the best NPS museums I’ve seen.  The corridors are designed to look like cave passageways, and the displays are very well done.

To get to Mammoth Cave National Park, take I-65 to Exit 48 if you’re northbound or Exit 53 if you’re southbound.  Signs will direct you to the park and the visitor center; it’s only 10-15 minute drive from the interstate.

There’s a hotel right next door to the visitor center.  You’ll find better values in Cave City (Exit 53).  The main campground is also near the visitor center.  Sites cost $20 per night.  Reserve your site during summer and spring/fall weekends.  Use the same reservations link provided above for cave tours.

Expect it to be hot and humid in summer, chilly and damp in winter, and pleasant in spring and fall.  The temperature in the cave is a constant 54 degrees, so bring a light sweater or jacket even if it’s summertime.

Thanks for visiting Road Trips with Tom.  Join us again on Sunday, December 11, when we visit Old Town San Diego.

This week’s road trip takes us to Fort Scott END_OF_DOCUMENT_TOKEN_TO_BE_REPLACED

You can run out of adjectives really fast when describing END_OF_DOCUMENT_TOKEN_TO_BE_REPLACED