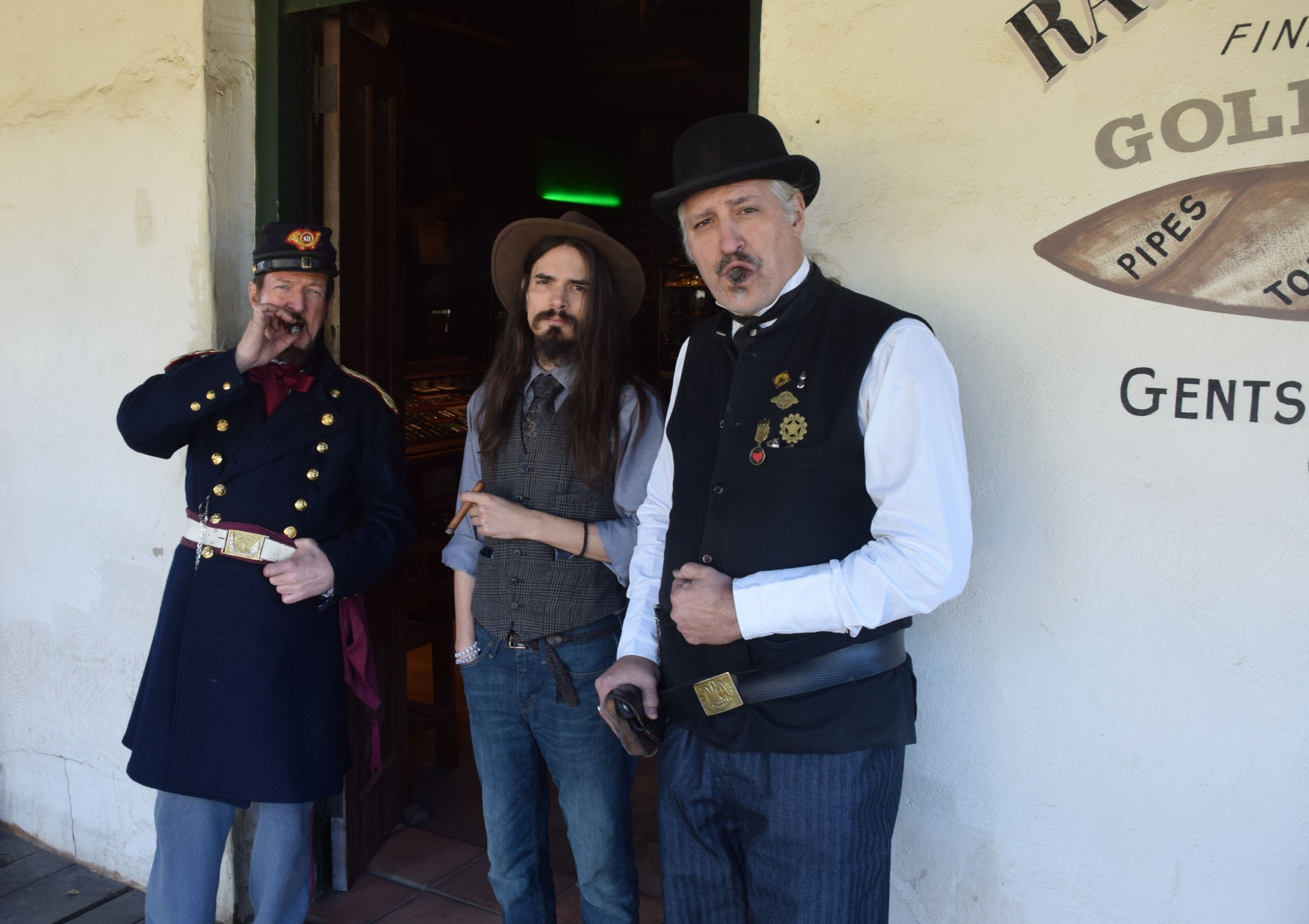 This week, Road Trips with Tom makes a two-hour run from our L.A. County home base to Old Town San Diego State Historic Park.  This is a fun place to spend a day.  It has lots of history, excellent shopping, entertainment and plenty of good restaurants . . . provided you like Mexican food.  It’s touristy, sure, but the commercial element is good-natured and tasteful.

You’ll also like the price.  Park admission is free.  Parking is free.  Exhibits and museums are free.  How cool is that?  If you’ve targeted San Diego as a road trip destination, you’ll want to allocate at least half a day to Old Town.

One of the things that contributed to Old Town’s attractiveness is its location.  In most cities, the historic core is part of the downtown area and surrounded by high rises.  In Los Angeles, for example, what’s left of the historic pueblo is a square block or two.  Not so in San Diego.  Old Town is remote from the city’s downtown.  Why?  Well, in 1870 or so, the city’s core up and moved to another location a few miles south.

While that caused Old Town to languish in the short term, it was a big advantage when preservationists decided to restore Old Town to what it looked like 150-plus years ago.  The site hadn’t been paved over, and many buildings, or at least their foundations, were still in place.  What you see now is a mix of adobe buildings from the Mexican period and frame buildings originally constructed after San Diego became part of the United States.  Some have been restored, and others were completely rebuilt.

San Diego has a fascinating history.  To help you understand what you’re seeing here, I’ll give you some of the highlights.

San Diego is the birthplace of California.  Its European discovery came in 1542, when Juan Rodriguez Cabrillo landed here and claimed the area for Spain.

Not until 237 years later, in 1769, did the Spanish found the first European settlement in what is now California.  The Spanish, as they did in Mexico, Central America and South America, were looking for gold.  The native Kumeyaay people didn’t have any – they didn’t know what it was.  The Kumeyaay, like most native people along the California coast, had a subsistence lifestyle based on hunting, fishing and gathering.

The Spanish founders were an uneasy partnership of the sword and the cross.  Gaspar de Portola led the military force, which built a fort on Presidio Hill, just east of Old Town.  He was accompanied by Junipero Serra (now Saint Serra), founder of California’s chain of missions.  According to my guide on the Old Town walking tour, Portola and Serra hated each other.  Portola considered the Kumeyaay to be savages, while Serra looked at them as people.

Relations with the Kumeyaay were strained.  In 1774, the padres moved the mission to its present location six miles inland, commandeering the natives’ traditional area for food-gathering for growing crops and raising cattle.  This resulted in a violent attack in which Kumeyaay warriors burned the mission to the ground.

Over time, native resistance waned, due in part to diseases brought by the Spaniards for which they had no defense.  The mission was rebuilt.  It supplied food, goods and labor for the little settlement that grew up on the plain below Presidio Hill.  The only contact San Diego had with the rest of New Spain was an annual supply ship.  In fact, San Diego was so remote that when Mexico won its independence from Spain in 1821, few people knew it had happened.  There was no newspaper, and most San Diegans at the time were illiterate.  Life went on with little or no hiccup.

Thanks to its sheltered harbor, San Diego eventually became an important trading post and developed an economy based on ranching.  The government secularized the mission, and large landowners controlled both the economics and politics of the region.  Still, when the Mexican War ended in 1848 and the U.S. flag was raised in Old Town’s plaza, the population was only about 700.

During the Gold Rush, San Diego became a major stopover for gold seekers headed for the Mother Lode.  Many Americans settled here and built wood-frame houses and stores.  After the Gold Rush, however, the economy went into the tank, and San Diego nosedived.

In 1867, a land developer named Alonzo Horton decided the city should be moved to a location a few miles south.  He bought up much of the land that’s now downtown San Diego for next to nothing.  Eventually, most business owners and professionals were persuaded to move to Horton’s “New Town,” leaving Old Town to wither away.  Fires and earthquakes pretty much finished the job.

In the early to mid-20th century, preservationists began to rebuild and restore Old Town.  This led in 1968 to the site becoming a California state historic park.

Your first task in visiting Old Town San Diego is to find a place to park.  I’ll provide more on that later in the post.

I suggest you begin your tour at the historic plaza, which has been the center of life since San Diego’s Spanish days.  The plaza is a grassy square block with a big flagpole.  From the plaza you’ll be surrounded by historic buildings.  On the west side is the Robinson-Rose House, built in 1853.  Here you’ll find the state park’s visitor information center.  Stop in to view the handcrafted diorama of Old Town.  This is also the starting point for guided walking tours ($10).  If you don’t take the tour, at least shell out of couple of bucks for the booklet entitled Brief History and Walking Tour Guide.

Bear right after leaving the visitor center, and walk east.  You’ll see a row of restored buildings – five adobe buildings from the Mexican period and one wood-frame structure.  Most of the historic structures now house commercial enterprises, but you’ll also see recreated rooms.  Most of the staff in the shops are in period costumes.

Walk behind the cigar store, and you’ll find the Casa de Machado y Stewart, a restored adobe home that’s been turned into a museum.

Next is the Colorado House, which was built in 1851, burned in 1872 and rebuilt in 1992.  Today it houses the Wells Fargo History Museum.  Inside is a beautifully restored Wells Fargo stagecoach.  Next door is the building that served as San Diego’s courthouse from 1849 to 1869.  You’ll find display rooms inside and the original jail out back.

How the upper crust lived

Turn left onto Mason St. and enter the first building on your right.  This is the Casa de Estudillo, one of Old Town’s highlights.  It’s not pretty from the outside – just a high adobe wall with a cupola on the roof.  Inside, however, it’s impressive.  The Estudillo family was probably San Diego’s richest, and their home reflects their status.  The U-shaped adobe structure surrounds a beautiful courtyard with a fountain and garden.  Several rooms have been restored, with authentic-looking furnishings.  A costumed docent is on hand to welcome you and answer questions.

Just beyond the Estudillo house is the Cosmopolitan Hotel.  Despite the wooden balconies, this is an adobe building.  It began as the single-story Casa de Bandini, the home of another prominent citizen.  The second floor was added in 1869 by Albert Seeley, who turned it into a hotel.  You can still get a room and a meal here.  To your right just beyond the hotel are the Seeley Stables, which house an impressive collection of horse-drawn wagons.  Behind the stable is a blacksmith shop offering demonstrations of the craft.

There’s more to see, including dozens of shops, many of which are in colorful arcades.  Just beyond the big church on San Diego Ave. are several restaurants.  My tour guide recommended the Café Coyote.  Turn around and walk west, and you’ll pass more shops and the Fiesta de Reyes complex.  In addition to shops, it offers an outdoor patio restaurant featuring strolling mariachis and other live entertainment.  Another concentration of shops is the Bazaar del Mundo on Taylor St.  Old Town’s shops, in general, offer a much higher quality of good than you’ll find in most tourist areas.

To get to Old Town from I-5 southbound, exit at Rosecrans.  Turn left onto Rosecrans, which becomes Taylor St. and takes you to Old Town after a few blocks.  From I-8 westbound, exit Taylor St./Hotel Circle, then follow Taylor St. west.  To get a parking map, click here:  www.oldtownsandiego.org/wp-content/uploads/2013/11/parkingmap.pdf.  If you’re visiting Old Town in summer or on a weekend, get there early to find a decent parking spot.

If you’re coming from Los Angeles or Orange Counties, Amtrak’s Pacific Surfliner is a nice alternative that eliminates the need to find parking.  Ten trains a day stop at the Old Town Transit Center.  You can board it at L.A.’s Union Station, Fullerton, Anaheim, Santa Ana or Irvine.  A pedestrian underpass leads you to the plaza.  The transit center also offers a large parking lot.  From Rosecrans, turn south onto Pacific Hwy., cross under the freeway, then turn left at the entrance.

The state park’s web site is helpful; you’ll find it at www.parks.ca.gov/?page_id=663

Most of the park’s features are accessible, and restrooms can be found in several locations.  There are handy maps posted at every entry point and here and there within the park.  Want to stay overnight?  There are a half dozen hotels in the area, and Hotel Circle is just east via Taylor St. Restaurants and shops abound.

Thanks for visiting Road Trips with Tom.  Join us on Sunday, December 18, as we visit Hoover Dam near Las Vegas.

Welcome to Benefit Street – the most impressive neighborhood of END_OF_DOCUMENT_TOKEN_TO_BE_REPLACED

This week, Road Trips with Tom steams down the mighty END_OF_DOCUMENT_TOKEN_TO_BE_REPLACED