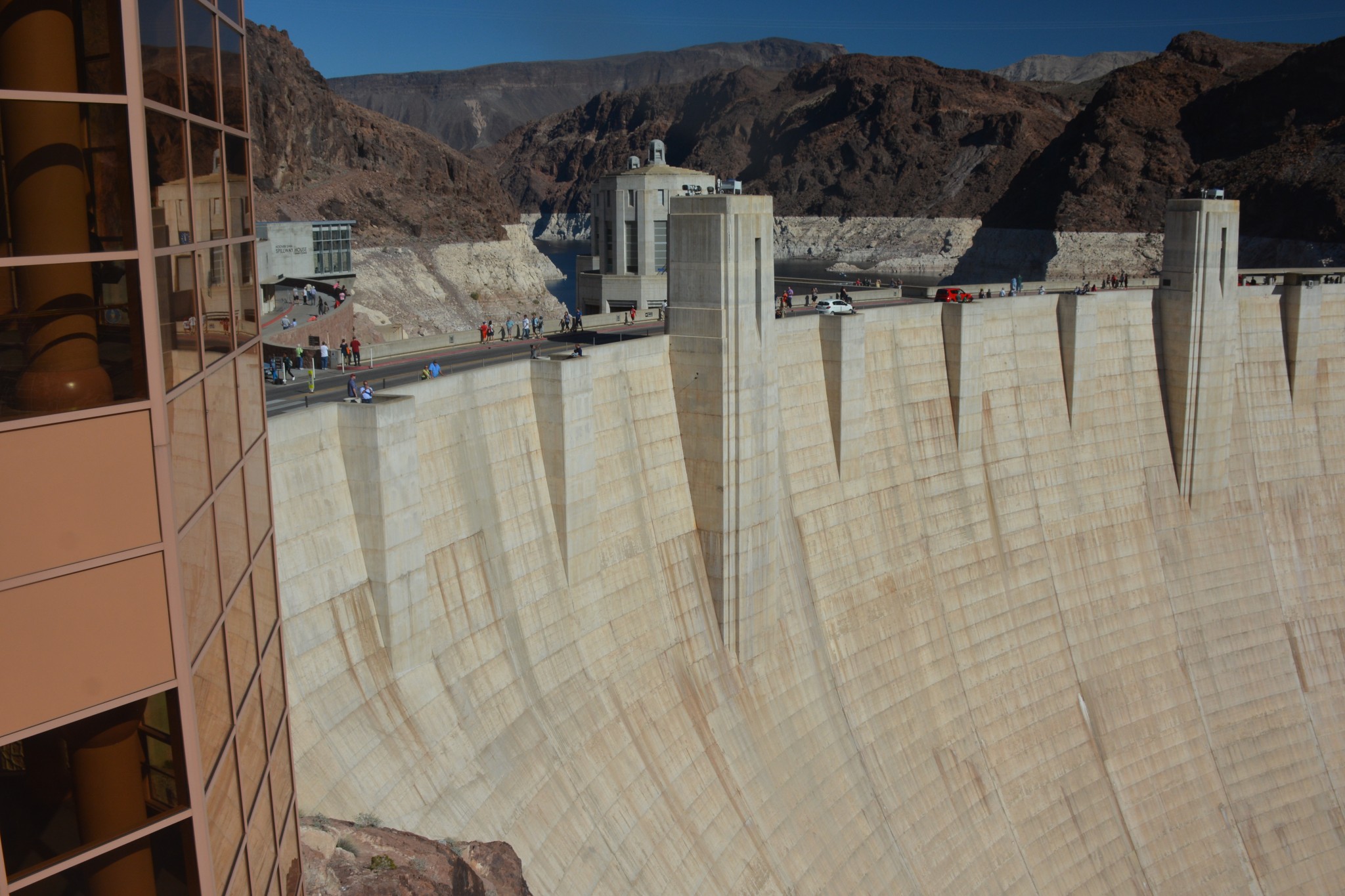 This week’s destination for Road Trips with Tom is Hoover Dam, located on the Arizona-Nevada border just southeast of Las Vegas. Here, a gigantic concrete barrier harnesses the Colorado River, generating electricity for three states and creating the largest man-made lake in the country.

Las Vegas is one of America’s top tourist destinations, and Hoover Dam is, by far, the most popular excursion for Vegas visitors.  I recommend you put Hoover Dam and Lake Mead on your road trip bucket list.  Ideally, you’ll take one of the tours provided by the U.S. Bureau of Reclamation, which operates the dam.  Over one million people tour Hoover Dam every year, so you’ll need a strategy for an enjoyable visit.

Strategy for a dam fine visit

Hoover Dam was built in the 1930s and was the world’s largest dam back then.  It’s still an engineering marvel.  Here are a few vital statistics:

Before Hoover Dam was built, the Colorado River alternated between flood and drought stages every year.  In spring, snowmelt from the Colorado Rockies raged through the Grand Canyon and flooded the farmland downstream.  In late summer and fall, it dried to a mere trickle.  Now, the river’s volume is controlled, allowing a steady supply of water that irrigates farms as far south as Mexico.  Some of the water is siphoned off to provide water for cities in three states, including the water that reaches my home in Whittier, California.

If you take the Hoover Dam tour, you’ll view a movie that explains how the dam was built.  You can also view similar videos on YouTube, but you’ll still have to sit through the tour video.

However, there are two YouTube videos I recommend you watch.  Both are short.  First is a Discovery Channel video that explains how Hoover Dam works.  Go to www.youtube.com/watch?v=sV1i2EuRvL0.  It’s just 4:45 long, and it will give you a much better picture of the dam’s operations than I can give you in writing.

The second video was shot by a visitor taking the Powerplant tour.  In it, the tour guide’s narration explains how 17 gigantic turbines generate electricity.  Go to www.youtube.com/watch?v=rbojuQw62ls.  Running time is 6:56.

How to get to Hoover Dam

From downtown Las Vegas, drive east on I-515 to its end, then continue on US 93 through Boulder City to the signed exit for Hoover Dam.  Expect to be slowed down by traffic and signals in Boulder City.   After exiting, you’ll follow a narrow, winding two-lane road to a security checkpoint, then on to the dam itself.  On your left you’ll see a parking structure.  It costs $10 to park, but it’s by far the closest parking to the tour entrance.  The alternative is to continue across the dam to the Arizona side, where parking lots are in tiers.  It’s a great view from there, but it’s also a long walk to the tour entrance (and uphill all the way back to your vehicle).

From the Strip, drive east on I-215, which merges with I-515 after a few miles.  Then follow the directions above.  This is the best route if you’re northbound on I-15 from California.

Coming from Laughlin?  Take Nevada SR 163 west to US 95, then head north through Searchlight to the junction with US 93.  Turn right there and follow the directions above.

From the dam’s observation deck, you’ll see the Mike O’Callahan-Pat Tillman Memorial Bridge, which carries US 93 from Nevada to Arizona.  Prior to its completion in 2010, this busy highway connecting Las Vegas and Phoenix, used that winding two-lane road that crosses Hoover Dam.  It was a traffic mess much of the time.  The bridge has a pedestrian walkway that offers what’s probably the best view of the dam.  Before you approach Hoover Dam, you’ll see a parking area for those who want to walk out on the bridge.

Lake Mead is worth a look, too.  The contrast of deep blue water against the barren terrain surrounding it can be stunning, especially early and late in the day.  It’s easy to get a nice look at the lake when returning to Vegas from Hoover Dam.  After a few miles, you’ll see a turnoff for Lakeshore Dr. on the right.  Just beyond the turn, you’ll find the entrance to the visitor center for Lake Mead National Recreation Area.  There, you find the usual National Park Service setup, including an interesting relief model of the lake.

Expect to get nailed for a $10 per vehicle entrance fee at a kiosk just beyond the visitor center.  After a dozen or so miles, turn left onto SR 564 to return to I-515 and Las Vegas.

Thanks for visiting Road Trips with Tom.  Next Sunday, December 25, we’ll keep with the season by heading to Mission San Juan Capistrano in Orange County, California.

Welcome to Benefit Street – the most impressive neighborhood of END_OF_DOCUMENT_TOKEN_TO_BE_REPLACED

This week, Road Trips with Tom steams down the mighty END_OF_DOCUMENT_TOKEN_TO_BE_REPLACED