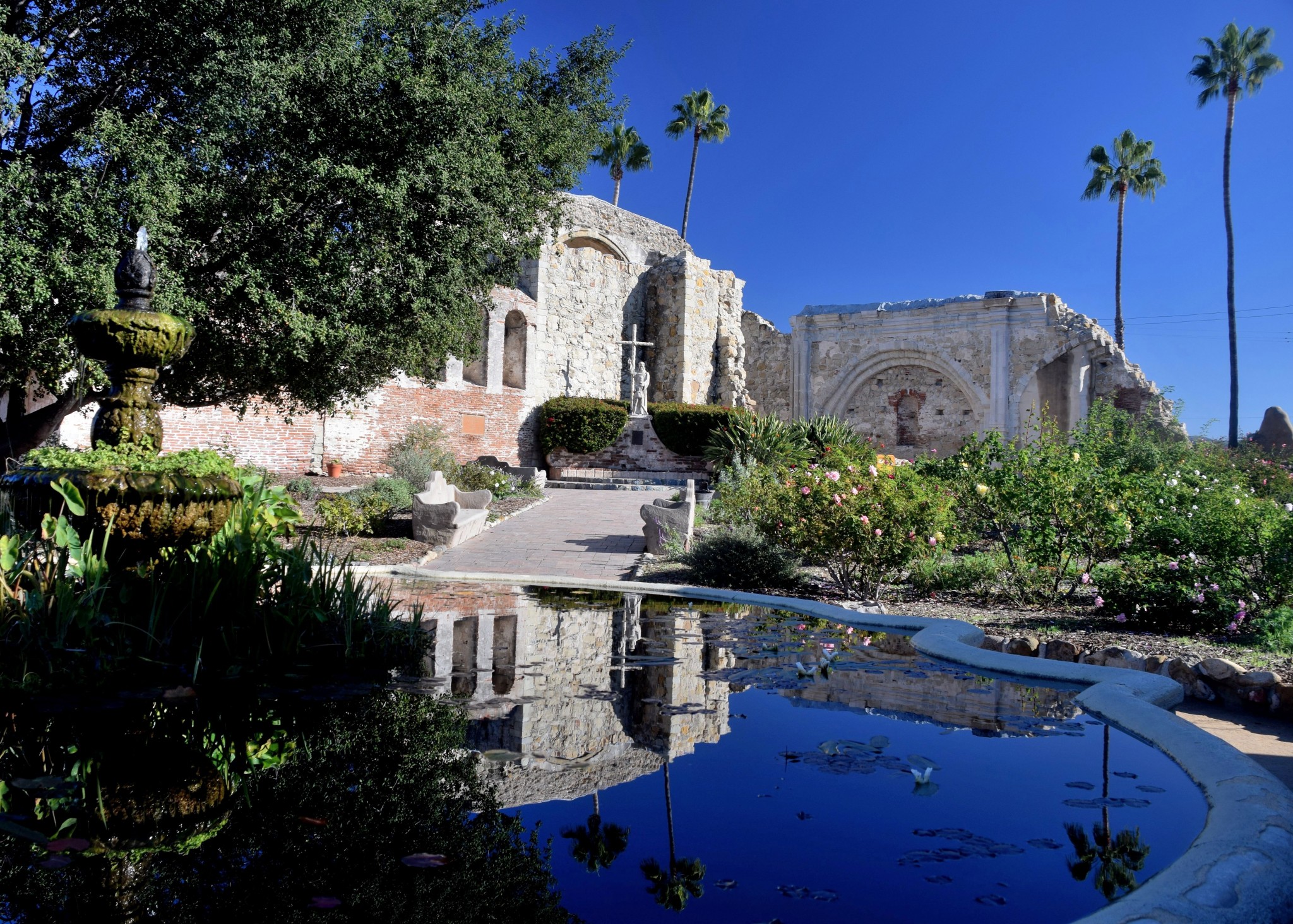 Capistrano is located just off Interstate 5 in south Orange County, about midway between Los Angeles and San Diego.  It’s about an hour’s drive from either, provided you’re making the trip at 3 or 4 a.m.  Otherwise, it’ll take just a bit longer; okay, it can take a lot longer if the traffic gods are angry,

Of course, you can avoid the traffic by taking the train – either Amtrak or Metrolink.  But . . . this is a road trips blog, so c’mon, let’s fire up Old Betsy and hit the freeway.

San Juan Capistrano is a great day trip if you live in Southern California.  If you’re coming from elsewhere, this is a nice place to visit during a SoCal trip at a fraction of the cost of other popular attractions.  Figure on two hours to explore the mission and grounds, plus time to shop and have lunch in adjacent Old Town San Juan Capistrano.

Half a million people visit Mission San Juan Capistrano every year.  I suggest you come on a weekend, for two reasons:  First, the traffic will be manageable, or at least only moderately awful.  And second, you’ll avoid the hundreds of fourth-graders who arrive in a flotilla of yellow buses every weekday. (California’s fourth-graders study the state’s missions.)  I also recommend you arrive by 10 to get a good parking spot and avoid large crowds.  When to come?  The gardens are at their best in April and May. The mission isn’t far from the ocean, so temperatures stay mild in summer.

There are several special events here.  The most famous, of course, is the return of the swallows every March 19.  Hundreds of cliff swallows build hive-shaped nests under the eaves of the Great Stone Church (see below) after migrating all the way from Argentina.  How do they know when it’s March 19?  Great question.  Not even the Shadow knows.  If you’d like to visit the mission that day to witness the return of the swallows, expect a mob scene.

Mission San Juan Capistrano was founded by the legendary Junipero Serra in 1776.  It was 7th in California’s chain of Spanish missions.  To put this into perspective, this same year saw the United States win its independence from Great Britain, while California was still a remote outpost of Spain.  The mission’s purpose was to convert the indigenous people to Catholicism and thereby secure Spain’s claim to Alta California.

Capistrano was a successful operation.  At its height, the neophyte population was about 1,500.  They grew crops and established California’s first winery.  Later, under Mexican rule, however, the missions were secularized, their lands gobbled up by wealthy rancheros, and the neophytes dismissed.  In the 1860s, President Abraham Lincoln returned the missions to the Catholic Church.  The last century saw Capistrano rebuilt and restored.

Do the free audio tour

From southbound I-5, exit at Ortega Highway (SR 74) and turn right.  If you’re coming north from San Diego, turn left after exiting I-5.  Take the first right turn, then go about two blocks to the mission entrance.  There’s a fair amount of parking at the corner of El Camino Real and around the Old Town area.

Mission San Juan Capistrano is open 9 to 5 daily.  Admission is $9 for adults, $8 for seniors and $6 for ages 4-11.  Included in your admission is a free audio tour.  You get a phone-like headset.  Just press the appropriate buttons that match the locations shown in the map-guide you’ll get when you enter.  The audio program is quite well done.  You return the headset when you leave.

Nine years to build, a few seconds to destroy

Okay, let’s get started.  After passing through the gatehouse, you’ll be in a courtyard with a fountain and garden.  Look to your right, and you’ll see the view in the featured photo at the top of this page.  The view is dominated by the ruins of what’s called the Great Stone Church.  This was a huge church – 120 feet by 40 feet with 50-foot walls and a bell tower 120 feet high.  It was built in the shape of a cross (which you can clearly see if you view the mission using Google Satellite View.  Unlike virtually all of California’s mission buildings, the church was made of sandstone.

Work began on the church in 1797.  The entire neophyte population labored to build the church, which was completed in 1806 and was the largest building in California.  The tower was visible from 10 miles away, and its bells could be heard from even farther away.

It lasted all of six years.  An earthquake estimated at 7.0 to 7.6 trashed the place.  Services were being held at the time, and 42 people were killed.  It was never rebuilt.  The original designer had died, and the mission lacked the expertise (and the money) for the project.

After checking out the ruins, retrace your steps and follow the path toward the arched passageway, then enter the relatively new exhibit on Junipero Serra and his legacy.  Just beyond the exhibit is the beautiful Serra Chapel, built in 1782.  This is California’s oldest building still in use.  From there, head west into another arched passageway, beyond which is the central courtyard.

From here, you’re on your own.  The courtyard, which doubles as a garden, is surrounded by arched passageways.  The west and south wings have several rooms filled with exhibits that depict what life was like here during the mission period.  From the size of the rooms and furniture, it’s obvious that people were much smaller in those days.  Take the time to explore the exhibits.

When you’re done, you’ll return your audio set at the gatehouse, then exit the mission through the gift shop.  It’s a nice shop, and I dare you to avoid spending money here. You’ll find plenty of places nearby to have lunch.  The Mission Grill right across the street serves killer burritos.

That concludes our visit to Mission San Juan Capistrano. For more information on the mission, its history and your visit, go to www.missionsjc.com

Next week’s Road Trips with Tom update will be a bit different.  It’s the blog’s second anniversary.  So on Sunday, January 1, I will share my favorite travel photos of 2016.  Please come back then!

Welcome to Benefit Street – the most impressive neighborhood of END_OF_DOCUMENT_TOKEN_TO_BE_REPLACED

This week, Road Trips with Tom steams down the mighty END_OF_DOCUMENT_TOKEN_TO_BE_REPLACED