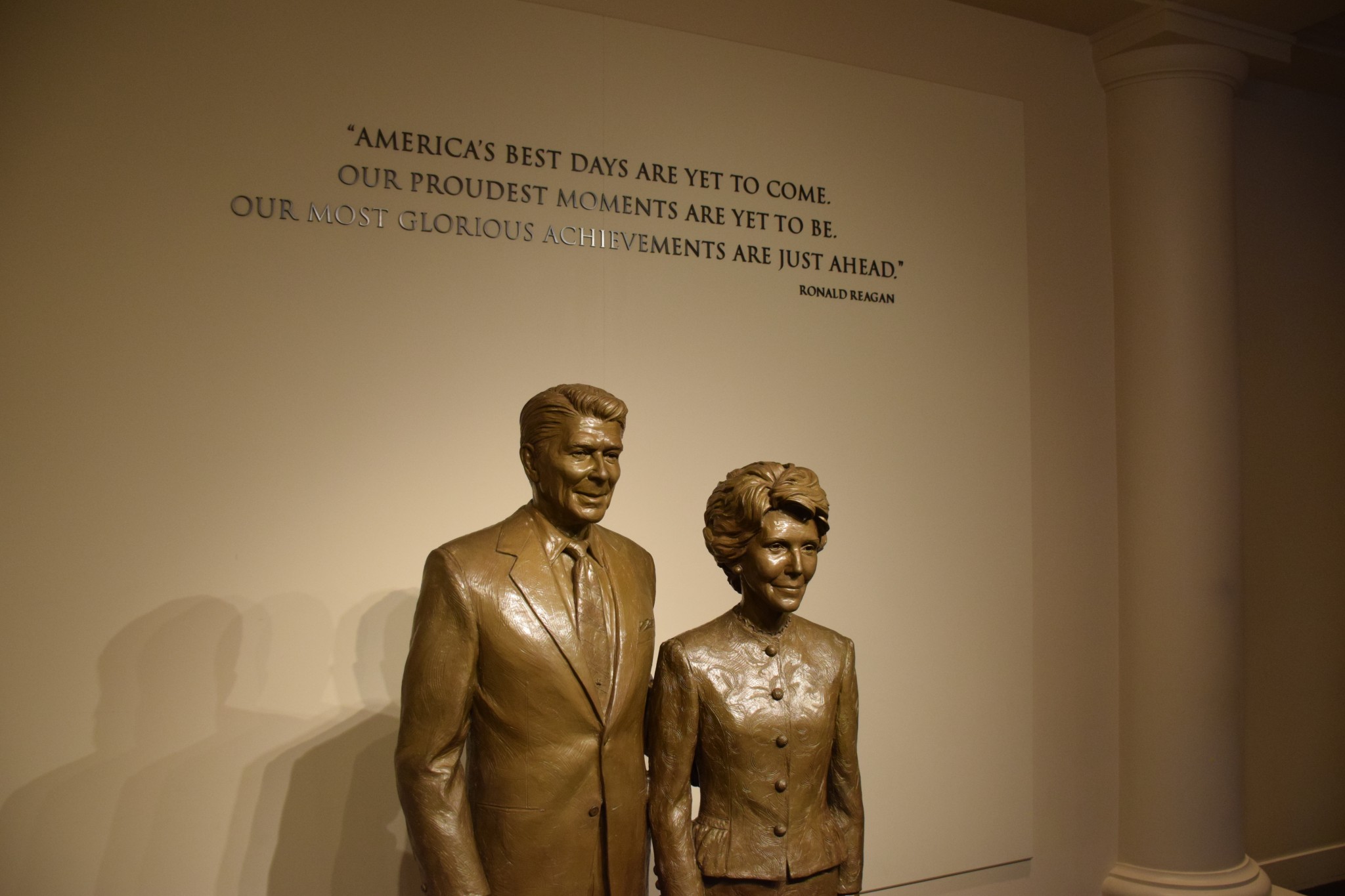 This week Road Trips with Tom pays a visit to the Ronald Reagan Presidential Library and Museum in Simi Valley, California.

As you’d expect, the museum covers our 40th President’s life in exhaustive detail.  But it also offers a fascinating look at the Presidency itself.  I enjoyed it immensely.

This blog isn’t the place for political observations, but I’ll say this:  My view of President Reagan is much more favorable than it was before my visit.  His love of our country and its freedoms was clearly genuine, and unwavering, inspiring courage and resolution.  I think history will put him among our most effective Presidents.

Whatever your view, I think you’ll enjoy a visit here.  I spent two full hours but could have stayed longer.

While its location in Simi Valley would seem to make this a slam-dunk destination for Southern California residents, it’s not.  Visiting the Reagan Museum takes planning and preparation.  I’ll walk you through the details in a few paragraphs.  First, however, let’s look at what’s here and how a visitor’s time will be spent.

Important:  For details on your visit, including online ticket sales, go to www.reaganfoundation.org

In 1955 Congress passed the Presidential Libraries Act, which required each outgoing U.S. President to build a library to house artifacts and documents reflecting that Presidency and its times.  The Reagan library opened in 1991, two years after he left the White House.

The setting is impressive – a 100-acre site atop a hill with great views in all directions.  For visitors, there are three main elements:  The museum, the Air Force One pavilion, and everything else (including the memorial site and Rose Garden).  You start with the museum, which is a maze of 24 separated but connected galleries covering every aspect of Reagan’s life, including his boyhood, the Hollywood years, California governorship, election campaigns, assassination attempt, and the Reagan Presidency itself.  There are lots of audio and video displays you can activate with push buttons.  There’s also a wealth of genuine artifacts and documents for you to examine.  Docent-led guided tours are available, but I found the self-guided tour to be just fine.

The museum’s highlight is a full-size replica of the Oval Office, furnished exactly as Mr. Reagan had it when President, right down to the jar of jelly beans on the desk.

One theme that clearly shone through was his relationship with his wife, Nancy Davis Reagan.  The President was obviously besotted with her, and their relationship was a key to his success.  Mrs. Reagan passed away earlier this year.  Another highlight is President Reagan’s daily diary, which he kept on his desktop and updated daily.  The handwritten pages have been scanned, and you can leaf through them, page by page.

Detour to Air Force One

Midway through the museum tour, you can take an optional side trip to the Air Force One Pavilion.  Don’t miss this!  Inside a gigantic three-level building is the Boeing 707 that served Ronald Reagan and six other U.S. Presidents.  This is no replica – it’s the actual aircraft!  Visitors board the aircraft in front and walk its length, exiting the aft door.  Docents are stationed along the way to explain what you’re seeing.

While the aircraft is impressive, it’s reflective of the times.  Air Force One is now a huge 747 with much nicer facilities.  Some airlines offer first class accommodations that are more luxurious than President Reagan’s personal cabin on this 707 aircraft.

Before returning to the museum, be sure to visit the Marine One helicopter and Presidential Motorcade.

After completing the self-guided museum tour, you’ll find yourself at the gift shop and café.  You can also tour a separate section with rotating exhibits. The gift shop has all the Reaganabilia you could ever want.  I had lunch at the cafe; it wasn’t bad at all, and the prices were reasonable.  There’s an outdoor deck with a nice view.  Outside is the memorial site and a piece of the Berlin Wall, which came down during Reagan’s presidency, largely due to his efforts and persistence.  The replica of the White House Rose Garden is in the front of the museum; it’s most easily viewed when you leave.

From my home in Whittier, the distance to the Reagan Library and Museum was exactly 70 miles.  Driving time on a Saturday morning was 1 ¼ hours.  Had I made the drive on a weekday, the driving time would have doubled . . . at least.

Here are directions:  Take the Ronald Reagan Freeway (SR 118) into Simi Valley and exit at Madera St.  Follow the signs south about three miles to the entrance road.  You can access the 118 from the 5, 405 and 210 freeways.

If you live outside Southern California and are an avid admirer of Mr. Reagan, the library and museum are a worthwhile travel destination.  I recommend you stay overnight in the area; you’ll find a Best Western and Courtyard by Marriott just down the hill toward the SR 118 freeway.  There are no doubt other choices nearby.

Here are my tips for your visit:

Once you get past the entry gauntlet, it’s a piece of cake.  The museum never felt crowded, even though it was.  Oh, also:  If you want to have lunch at the Reagan café, get there a few minutes before noon.  When I left the café at 12:15, there was a long line waiting to get in.

Lastly, photography is permitted, but flash is not.  In theory, you can’t take photos on Air Force One, but the docent in the aft cabin didn’t mind.  So I did.

This week’s road trip takes us to Fort Scott END_OF_DOCUMENT_TOKEN_TO_BE_REPLACED

You can run out of adjectives really fast when describing END_OF_DOCUMENT_TOKEN_TO_BE_REPLACED

Welcome to Benefit Street – the most impressive neighborhood of END_OF_DOCUMENT_TOKEN_TO_BE_REPLACED