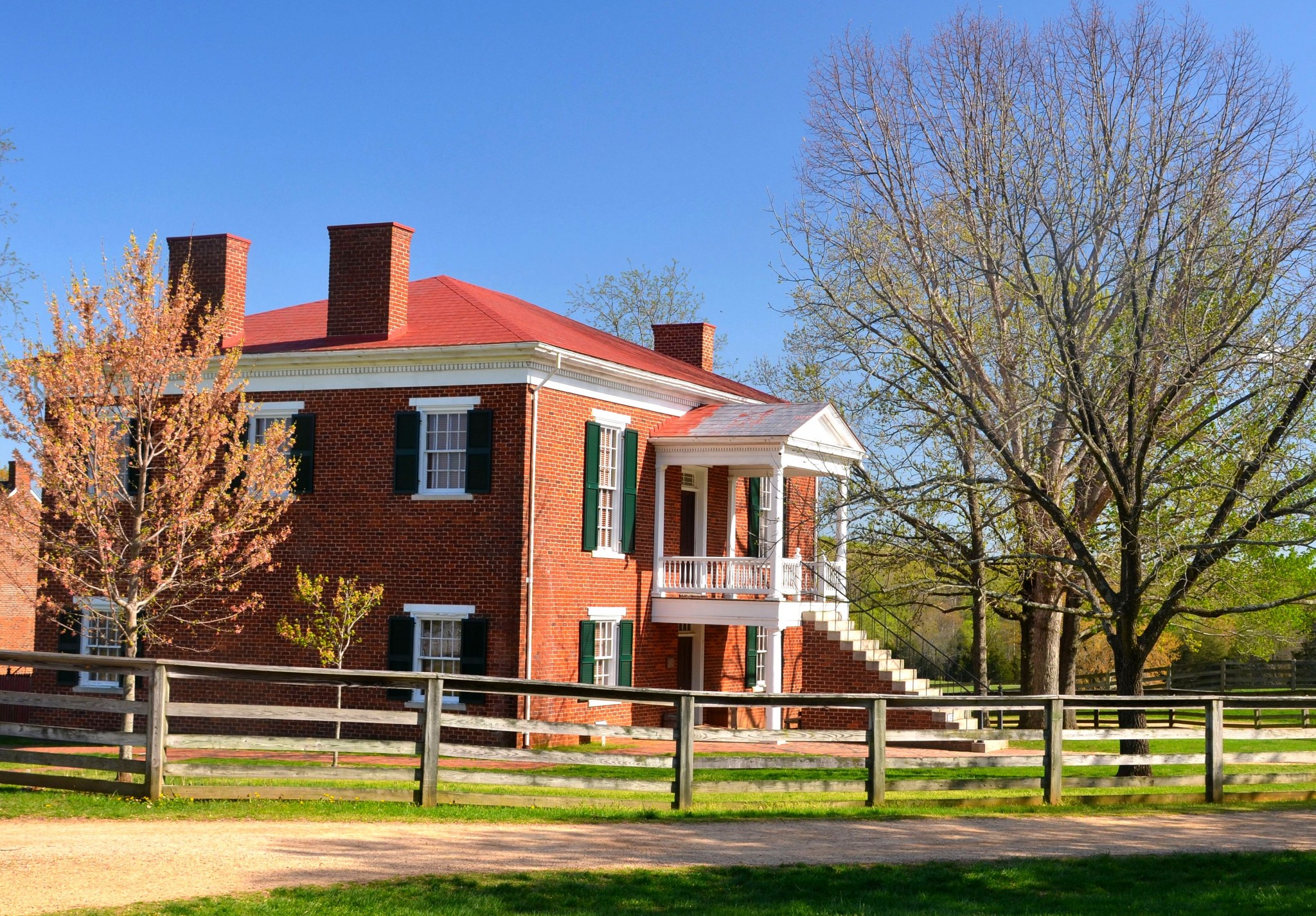 This week Road Trips with Tom takes you to the pleasant central Virginia hamlet of Appomattox Court House, which played a Civil War role way out of proportion to its modest size.

Every Civil War battlefield I’d ever visited had a bucolic appearance, with cannons and monuments positioned  among the verdant fields and hills – to remind us, I suppose, of the carnage inflicted by Americans upon other Americans.  This seems to be the standard presentation of an area ravaged by war in the mid-19th century.  The contrast worked on me.  I always left those battlefields feeling a mixture of bittersweet sadness and outrage.

But I didn’t see any cannons at Appomattox Courthouse . . . no monuments to those who died.

What I saw instead was a restored, healthy-looking, 19th-century rural community – probably the kind of place the thousands who died in this most un-civil war thought they were fighting for.  Maybe that’s appropriate, because this tiny hamlet in central Virginia’s tobacco country was where the war finally ended.  After all the battles, bullets and bodies left strewn across sites over a thousand miles apart, it was stopped right here by the signatures of two old men.  So it’s perhaps fitting that what you see at Appomattox sets a tone of recovery, of hope, of a young country headed into an exciting but uncertain future.

Was that the emotion that filled me on the sunny April afternoon when I visited Appomattox Courthouse?  Nah, I was seriously annoyed because the National Park Service was closing down the park at 5 and was shooing visitors away just as the light was getting good for photography.  It may be a silly question, but why would you close a park where dozens of visitors are enjoying the experience you spent millions to create?  At 5 p.m.?  If nothing else, it gave me some practice in the fine art of curmudgeonry.

There were casualties here.  In fact, Appomattox was where the Confederate Army of Robert E. Lee and the Union Army led by Ulysses S. Grant happened to be when Lee realized he had no winning cards in his hand.  They fought on the morning of April 9, 1865, resulting in 8,000 Confederate deaths, including eight generals.  When the generals start dropping, you really have a problem.  Afterward, knowing when to fold ‘em, Lee responded to Grant’s overtures regarding surrender, and a meeting was hastily arranged for that afternoon.  A local farmer named Wilmer McLean offered his home, so that’s where the surrender took place.

If you’re interested, you can get more details on the history and the military situation online. The Wikipedia site www.wikipedia.org/wiki/Battle_of_Appomattox_Court_House)  is actually better than the National Historic Park’s website, which you’ll find at www.nps.gov/apco./

Note:  In testing this link, the Wikipedia link failed to connect.  Instead, Google Appomattox Courthouse, and use that link.  The NPS link worked fine.

This is pretty country, as the accompanying photos show.  None of the original buildings or furnishings survived intact, so most of the village was restored and rebuilt.  The Park Service spent lots of our tax dollars to show you what a 19th-century Virginia hamlet looked like.  The buildings are handsome and feature reproductions of original furnishings.  In summer, costumed interpreters are available most days.  There’s also a cell phone tour with designated locations where messages will play on your phone.

Your first stop should be the visitor center, housed in the actual courthouse (pictured at the top of this week’s post).  It’s open 9 to 5 daily.  In addition to displays, it offers a pair of films on the area’s history.

The highlight is the restored McLean House, where you can enter the room where the Civil War surrender ceremony took place.  Furnishings are accurate reproductions of the originals.  A costumed interpreter is stationed in the parlor to explain what happened and answer questions.  That’s where I was when the Park Service started herding visitors toward the exit at 5.  I walked to the parking lot with the costumed interpreter and got my questions answered, along with a photo of him.  He turned out to be a local guy who did this gig on a volunteer basis.  Can’t blame him for wanting to get off work.

The national historic park’s entry fee is $10 per vehicle.

Appomattox Courthouse National Historic Park is well worth visiting, but you’ll have to work for this one.  It’s not close to any major cities and not on interstate highways or other major travel routes.  The nearest city is Lynchburg, about 25 miles west.  That’s where you’ll find the nearest accommodations and other travel services.  From Lynchburg, take US 460 east, then turn north on SR 24.  From Richmond, drive 63 miles west on US 60, then 15 miles south on SR 24.  Allow two hours for your visit.  And get there well before 5 p.m.!

This week’s road trip takes us to Fort Scott END_OF_DOCUMENT_TOKEN_TO_BE_REPLACED