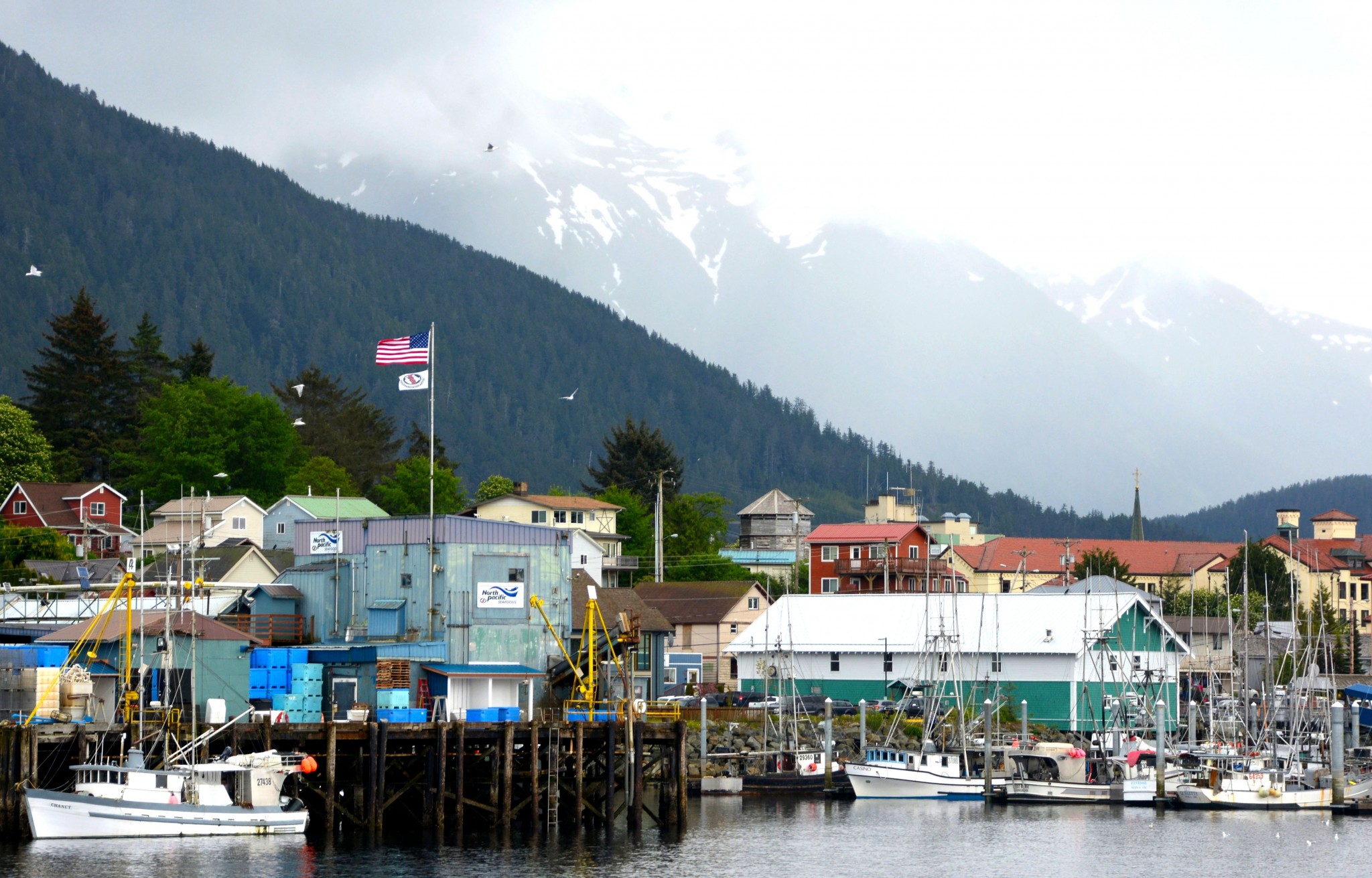 People who come for the halibut and salmon fishing like it a lot.  A radiology tech at my local hospital told me he’d gone to Sitka for the fishing every year for the past 10.  My former Hyundai colleague Myung Suh, who’s quite the world traveler, once told me Sitka was one of his favorite places.  Everyone who visits on a cruise ship likes it.  Thanks to Sitka’s out-of-the-way location, it gets far fewer cruise ships than Juneau or Ketchikan.  As a result, it’s much less hectic and crowded when cruise ship visitors are in port.  Everything they want to do while here is easily accessible.

And residents – those who brave 100 inches of rain a year to live in an isolated island town of 8,000 with no roads in or out — appear to really love it.

“I’m like a barnacle on the pier,” said a Tlingit woman I met at the airport.  “I’m not going anywhere.  This is the best place to live and raise a family.”

So I had high expectations when my 22-minute Alaska Airlines flight from Juneau landed at Sitka’s tiny airport and taxied up to the one gate.  Those expectations were tested immediately, however, when I was greeted by a dreary day with gray skies and drizzle.  By the morning of the second day, though, the place had started to grow on me.  And by the afternoon of the third day, I didn’t want to leave.  And now that I’m home, I want to go back, drizzle and all.  Did the sun ever show up?  Yes, as I was sitting in the boarding lounge waiting for my flight back to Juneau.

What does Sitka have that Juneau doesn’t?  In a word, charm.  The charm comes from a rich history (see below), a spectacular setting, interesting architecture, fantastic totem poles, and genuinely friendly, mellow people.  As for the weather . . . well, you can’t have everything.

Sitka is on the west coast of Baranof Island.  It’s not part of the Inside Passage.  Instead, Sitka’s island-dotted sound faces directly on the open ocean.  This has kept it isolated from much of southeast Alaska’s cruise ship and ferry traffic, but it’s made it easily accessible from the west.  This had a direct effect on the town’s history, which is very different from those of all other southeast Alaska towns.

Sitka was colonized beginning in 1799 by Alexander Baranof, head of the tsar-sponsored Russian-American Company,  and for several decades was New Archangel – seat of the Russian empire in North America.  The company was lured by the fur trade, especially sea otter pelts.  The Russians arrived in a location that had been home to the native Tlingit people for as much as 10,000 years.  The Tlingits drove the Russians out in 1802, but the Russians returned two years later with soldiers and cannons, and took their colony back.  There was an uneasy peace between the two groups for many years, but the Russian Orthodox Church, led by a remarkable Bishop named Innocent, took the lead in healing the division.  Innocent learned the Tlingit language and created a Tlingit-Russian dictionary.  Prior to that, the Tlingits didn’t have a written language.

In 1867, the United States purchased Alaska for $7.2 million and took possession at a ceremony atop Sitka’s Castle Hill.  The Tlingits mistrusted the Americans and remained close to the Orthodox Church.  Even today, most church members in Sitka are natives.

That may be more history than you wanted to read, but it’s interwoven into everything you see when you visit Sitka.

Lay of the land

Sitka’s compact downtown is about six square blocks.  The center of activity is a large parking lot at the corner of Harbor Dr. and Lincoln St., site of one of Sitka’s two traffic signals.  When a cruise ship lands at the dock 6 miles to the north, a succession of green buses efficiently transports the tourists to this lot, where they transfer to whatever shore excursions they’ve chosen.  Many tour operators are here, too, for visitors looking for activities or tours.  There’s a marina next door, so people taking whale watching or other waterborne tours can board right there.

If you’re on your own, you’ll find that just about everything you want to see is within walking distance, including trailheads for those who want to hike.

Even with a rental car, which I had, you can’t go far.  Three blocks north of Lincoln St. is a traffic circle (and the very nice Super 8 where I stayed).  From the circle, Halibut Point Rd. runs 7 miles north, and Sawmill Creek Rd. runs 7 miles south.  That’s pretty much it.  Both roads are scenic.  Beyond the roads, Baranof Island’s 4,700 square miles are wild.

Here are the sights and attractions I recommend for Sitka visitors.  For more information on what to see and do in Sitka, go to the Convention and Visitors Bureau website at www.sitka.org.

Sitka National Historic Park.  While the park focuses on history, its greatest value is as a balm for your soul – a place to detox yourself from life’s stresses.  After watching the 20-minute video in the visitor center, look outside the door, and you’ll find the starting point for a one-mile trail looping through a spectacular rainforest, occasionally giving you glimpses of Sitka Sound.  Along the trail are several amazing totem poles that were originally carved for the 1904 St. Louis world’s fair.  I loved this place so much I went back the next day and did the hike again!  Website:  www.nps.gov/sitk.

Fortress of the Bear.  This is the only attraction I’m listing that’s not within walking distance of downtown Sitka.  No worries, though:  There are shuttle buses.  Fortress of the Bear is a wildlife rescue organization that adopts cubs when their mothers are killed.  Prior to the organization’s establishment, cubs were typically euthanized, because they couldn’t survive in the wild.  These aren’t wussy little pooh bears.  They’re Alaska Coastal Brown Bears.  Only the brown bears on Kodiak Island are larger.  The bears you’ll see here weigh up to 1,200 pounds!  The rescue organization has transformed part of an abandoned factory into a bear habitat.  Visitors pay the $10 admission fee, then climb to a sheltered catwalk from which they can observe and photograph the bears.

Alaska Raptor Center.  This is another wildlife rescue outfit.  It focuses on birds of prey, including our national symbol, the bald eagle.  These are birds that have been injured.  Those whose injuries heal are trained to fly, then released to the wild.  Others remain here permanently.  Admission is $12 per person.  I was disappointed at not being able to get a close-up photo of an eagle.  When larger groups and tours arrive, they bring one out with a handler, but there was no cruise ship in port the day I was there, and I was the only visitor.  I had to shoot through a metal mesh.  An extension of the rainforest trail at Sitka National Historic Park will bring you here in style.

Russian Bishop’s House.  This is part of the national historic park.  It contains displays downstairs, but the good stuff is upstairs and costs $4 for a ranger-guided tour.  Pay it.  The National Park Service spent $5 million to restore the house to its 1853 appearance, complete with original furnishings and artifacts.  In addition to viewing the impressive goodies inside, you’ll learn about the amazing Bishop Innocent.  You can read about him and this house at www.nps.gov/sitk/planyourvisit/upload/SiteBulletin_RussianBishopsHouse.pdf

Dance groups.  Two very different dance groups perform for visitors, and both are worth seeing.  I took the city tour from Sitka Tours, part of which was a performance by the New Archangel Russian dancers.  The 34 women in this troupe have performed all over the world.  Also, Tribal Tours takes its customers to a performance of authentic Tlingit dances that are reputedly excellent.   Go to the Convention and Visitors Bureau website for details.  Again, www.sitka.org.

Waterborne adventures.  Want to fish?  See whales and other marine wildlife.  Rent a kayak?  Several operators can help.  Contact the Convention and Visitors Bureau for details.

St. Michael’s Cathedral.  This onion-domed edifice is the mother church of the Russian Orthodox Church in Alaska.  You can’t miss it; it’s right in the middle of Lincoln St.  Inside, you’ll find precious icons and other items.  The church is still used for services.  Donation is $5.  (They call it a donation, but I doubt you’ll get in without paying it.)

Sheldon Jackson Museum.  This museum focuses on native American history.  While the collections are extensive and intrinsically interesting, I felt they were disorganized, and I got bored after about 20 minutes.  Admission is $5.

Shopping on Lincoln St.  On the 3-block stretch of Lincoln St. north of the traffic signal is Sitka’s downtown, where you’ll find shops selling everything from museum-quality native art to cheap souvenirs.  (Although this is Alaska; nothing’s cheap here.)

The easiest way to get to Sitka is to fly via Seattle.  Alaska Airlines and Delta (seasonal) make the trip; some flights connect via Juneau or Ketchikan.  Avis rents cars at Sitka’s airport.  You can also get there by state ferry; the southern departure point is Bellingham, Washington.

The Westmark and Super 8 are the best-known hotels, but there are others.  Be aware that all of them sell out a month or more in advance during summer.  You also have several B&Bs to choose from, many with ocean views.

On cruise ship days, downtown restaurants can get crowded at lunchtime, but you’ll mostly find locals at dinner.  Why?  Last buses back to the cruise ships leave at 6.  You can eat fairly well in Sitka, but you’ll pay for the privilege.  Actually, I can generalize by saying that everything is expensive here.  Use Yelp to find something you like.

Need gas?  There are two stations.  Groceries?  Sitka has two markets; one, on Baranof St. north of Lincoln, is within walking distance of downtown.  McDonalds?  Yes, but it’s some distance out Halibut Point Rd. and expensive.  Subway?  Yes, and it’s right downtown on Seward St.  Nightlife?  There’s not much.  Sitka pretty much rolls up the sidewalks early.

Sitka is a great place for bicycling.  You can rent a bike from Yellow Jersey on Harbor Drive.

This week’s road trip takes us to Fort Scott END_OF_DOCUMENT_TOKEN_TO_BE_REPLACED

You can run out of adjectives really fast when describing END_OF_DOCUMENT_TOKEN_TO_BE_REPLACED