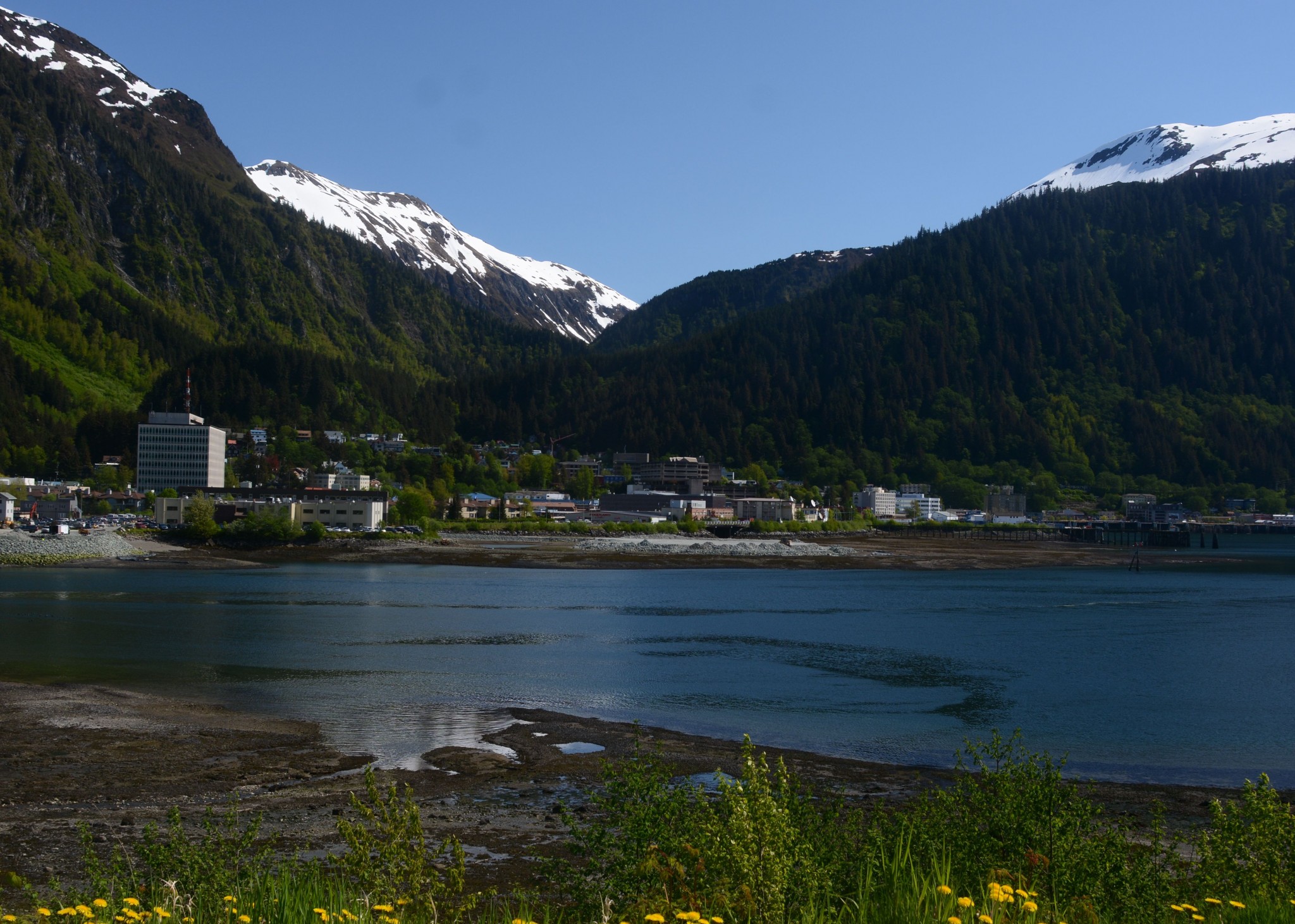 I’ve just returned from a 10-day trip to Juneau and Sitka, Alaska.  This week’s post will feature Juneau.  Sitka will be the featured destination on Sunday, May 29.

So why, you might ask, would a road trips blog focus on two destinations you can’t drive to?  Three reasons:  First, you can take Old Betsy to these places by driving to Bellingham, Washington, and putting her on the Alaska State Ferry.  Second, there are a few roads you can drive once you’re there.  And third, both are worthwhile destinations that belong on every road-tripper’s bucket list.

For the trip, I flew on Alaska Airlines to Juneau via Seattle, stayed there six days, then flew to Sitka for three days, back to Juneau for another day, then home.  I was able to use my American Airlines frequent flier miles to cover the cost.  Given Juneau’s normal weather (100 inches of rain per year), I was blessed with gorgeous sunshine and temperatures in the 70s the whole time I was there.  Sitka was another story – heavy overcast and constant drizzle.

Let’s start with Juneau, shall we?

On my first full day in Juneau, I was sitting on an outdoor deck having a lunch of ridiculously expensive (but typical for Alaska) crab cakes.  Alaska’s capital was sunny and peaceful.  Seaplanes landed in the channel and taxied to the dock.  Fishing boats and a few pleasure craft passed by.  Roller skaters, people walking their dogs, and joggers used the boardwalk along the Marine Park shoreline.  Office workers sat on benches and ate their brown bag lunches – only tourists eat $28 crab cakes.  It was all very mellow, peaceful and relaxing.

Then I noticed a building bigger than any structure in Juneau floating up the channel.  As it got closer, I could tell it was a gigantic cruise ship – Princess Cruises’ Ruby Princess.  Shortly after it docked, it disgorged over 3,000 people, mostly seniors or couples over 50, many using wheelchairs or walkers.  As this happened, Juneau was transformed.  Every shop on Franklin Ave. flung open its doors and turned on the lights.  Ditto for the cafes and bars.  Booths manned by touts selling city tours, glacier flights, whale watch cruises, fishing trips (the halibut fishing here is world class, followed later this summer by the salmon season) and other enticements, were ready to go.  A dozen tour buses pulled into a designated lot, and tour company representatives held up signs identifying themselves.  Suddenly, Juneau was in the “shore excursion” business, and it became a mob scene.  And that was with just one shipload of visitors.

This is a typical scenario every year from May to September.  Juneau is the top port of call for the highly popular Alaska Inside Passage cruises.  All the big ships come here, as many as five at a time.  That can add 10,000 or more people to a city of just 29,000.  Most passengers have already purchased shore excursions through their cruise companies before leaving home.  But for those who didn’t, there’s no shortage of operators ready to fix them up.

I was one of the customers.  I’d booked a two-hour “city and glacier” tour, on which I was the only non-cruise ship passenger.  It was fun to talk to the others; the consensus appeared to be that they were really having a great time.  Our driver was a Tlingit native, and he told us a lot about the tribe’s history and culture. 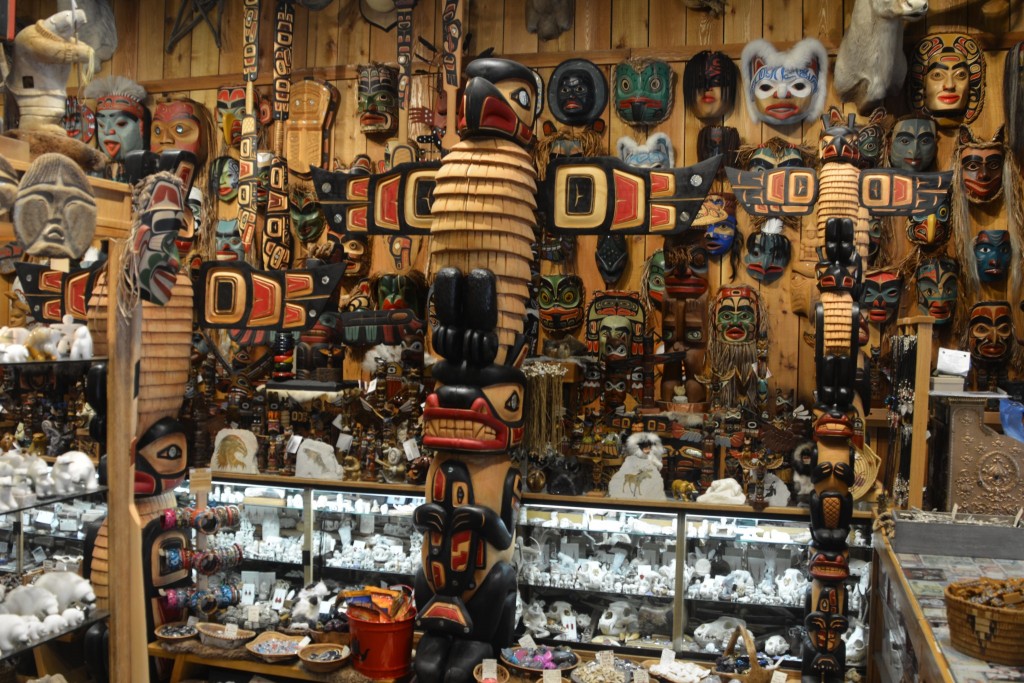 Juneau began as a mining town that boomed in the late 19th and early 20th century, during which time it became Alaska’s capital.  Mining mostly ended by World War II, and government became Juneau’s main economic engine.  People will tell you it still is, but don’t believe it.  Juneau is defined by tourism.   Not all visitors arrive on cruise ships.  Many come on the ferries and on Alaska or Delta Airlines.

Juneau is on the mainland – not an island.  It’s squeezed between Gastineau Channel and mountains that rise almost vertically up to 3,000 feet.  Behind them is a massive icefield that extends well into Canada.

The city has three main sections:  Downtown, with government offices, older housing, tourist shops and cruise ship docks; Douglas, on an island reached by a bridge across the channel; and Mendenhall Valley, several miles north, which contains the airport and Juneau’s suburbia.  In addition, the ferry terminal is at Auke Bay, beyond Mendenhall Valley and 12 miles from downtown Juneau.

Here are a few things I noticed about Juneau.  The people are very active in outdoor pursuits, despite the rainfall.  A high percentage are hikers, runners, kayakers, and fisherpersons (is that a word?).  They’re also casual; I didn’t see anyone I’d consider well-dressed by California’s workplace standards.  Gas is expensive, but no more so in than Southern California.  People drive nice, late model vehicles, but I didn’t see a single Mercedes, BMW or Lexus.  There’s an inordinate number of Subarus, including my rental car.  There are also lots of pickups and big SUVs suitable for towing boats.  Juneau has a sedate, family-oriented vibe.  People are very friendly.  Oh, and let’s not forget the prices:  Everything costs more here.  As an example, the McDonalds doesn’t have a one dollar extra value menu; it’s a $1.59 extra value menu.

Mendenhall Valley also has Juneau’s number one attraction – Mendenhall Glacier.  What other city has its own municipal glacier?  Juneau does, and it’s spectacular.  The drive to the glacier was only 4 miles from my hotel next to the airport!

What about roads?  Well, there are some, but not many.  On Douglas Island, North Douglas Rd. runs about 12 miles, with two spectacular viewpoints along the shore.  It also leads to the Rainforest Trail, a popular path near road’s end.  But the serious drive runs north along Glacier Highway (Alaska SR 7) for about 38 miles.  It’s a stunningly gorgeous drive offering glimpses of the Inside Passage, with high, snowcapped peaks lining the far shore.  The highlight for me was Eagle Beach State Recreation Area, where you’ll probably spot eagles and perhaps humpback whales.  The population of Alaska coastal brown bears is large; hikers are urged to use caution on the trails.

How you spend your time in Juneau depends on your interests, naturally.  But here’s my list of what I consider “must see” things:

Mendenhall Glacier.  It’s close, and it’s amazing!  It’s part of the Tongass National Forest, which has a very nice visitor center overlooking the glacier and iceberg-dotted Mendenhall Lake.  Don’t miss the video, which will tell you everything you ever wanted to know about glaciers.  There’s a viewing pavilion, a 1/3 mile trail to a photo point, a one-mile trail to big Nugget Falls, and other hiking trails.  On cruise ship days, get there early in the morning or late in the afternoon; the visitor center can get crowded.  If you’re downtown and don’t have a vehicle, there are shuttle buses.  To learn more, go to www.fs.usda.gov/detail/tongass/about-forest/offices/?cid=stelprdb5400800

Alaska State Museum.  I’m taking this on faith, because the museum was closed for relocation and renovation while I was there.  It’s expected to open June 6, This was considered an outstanding museum before it closed, and it should be even better after it reopens.  If you’re going to Juneau, you can get details, including hours and admission prices, at www.museums.alaska.gov/address

Downtown and Marine Park.  If you’re driving, park in the structure next to the library on Marine Dr. (75 cents/hour).  The shoreline area and main shopping area are easily reached on foot from there.  Want to see Juneau’s rather crummy-looking state capitol and other downtown buildings?  The streets are narrow and steep, and parking is nonexistent.  Take a taxi or the city shuttle from the Transit Center on Main St. and Marine Drive.  Along Franklin St. are shops selling everything from museum quality native American art to tacky souvenirs.  You’ll also find plenty of places to eat.

Glacier Highway.  As I mentioned earlier, this is an awesome drive.  Bring a picnic lunch, and spend half a day.  Traffic is light on weekdays.  If you’re camping, you’ll find nice campgrounds at Eagle Beach and at Echo Cove at the end of the road.

If you’re familiar with Juneau, you’ll notice I didn’t include the Mt. Roberts Tramway.  After reading the Yelp reviews, about half of which said it was way overpriced at $36 per pop, I skipped it.

The highlight of my trip was an all-day cruise to Tracy Arm – a fjord about 45 miles south of Juneau.  Picture Yosemite Valley or Zion Canyon only much longer, with near-vertical granite walls rising 2,000 feet on both sides.  There are icebergs and waterfalls everywhere – more than you can count.  Wildlife abounds:  We saw eagles, black bears, humpback whales, harbor seals and mountain goats.

Tracy Arm forks about halfway in; each fork ends at a massive tidewater glacier.  We only visited one of them, because there was too much ice for our boat to get through in the other fork.

It was a long day.  We left the Marine Park dock at 7:45 a.m. and didn’t get back until after 6 p.m.  But wow!  This is easily the most spectacular place I’ve ever been, and I recommend it highly.  I went with Adventure Bound Alaska – www.adventureboundalaska.com  The cost was $160.  Advance reservations are essential.

This week’s road trip takes us to Fort Scott END_OF_DOCUMENT_TOKEN_TO_BE_REPLACED

You can run out of adjectives really fast when describing END_OF_DOCUMENT_TOKEN_TO_BE_REPLACED