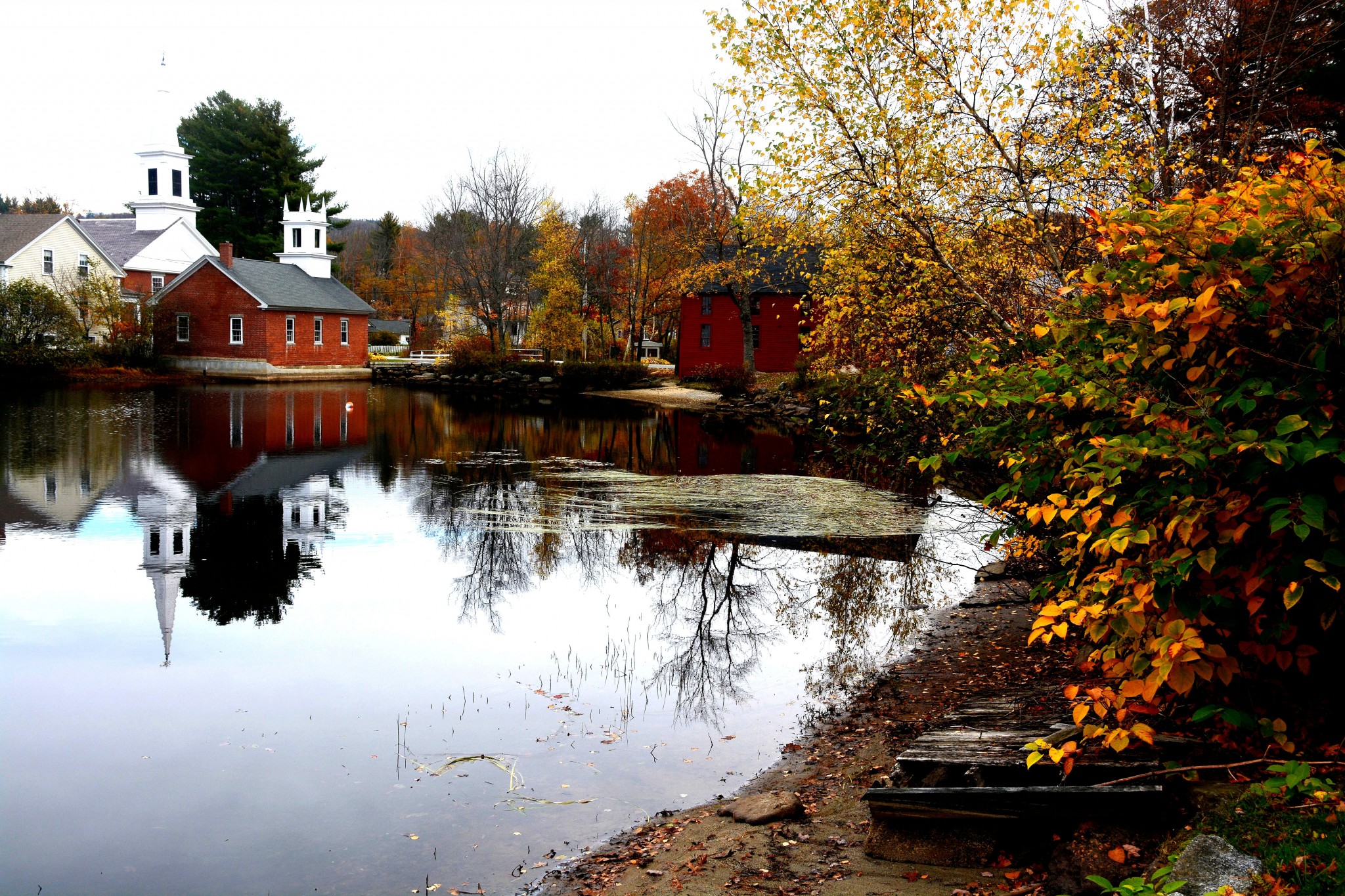 This week we’ll visit 10 of the most attractive and picturesque villages in New England.

As this is being posted, I’m in Alaska.  It’s not technically a road trip, because I’ll be in Juneau and Sitka – two cities you can’t drive to.  So this week’s post was prepared last week and pre-programmed to appear on May 15.

This post is a tour of my 10 favorite New England villages.  I especially enjoy visiting New England in fall and winter.  That’s why you’ll see colorful foliage or snow in each of the photos.

This is a fairly long post, but it’s mostly photos.  There’s not a lot of reading for you.  NOTE:  The post has a few web links.  For some reason, web links in pre-programmed posts aren’t usually “live,” meaning you’ll have to paste them into your browser. 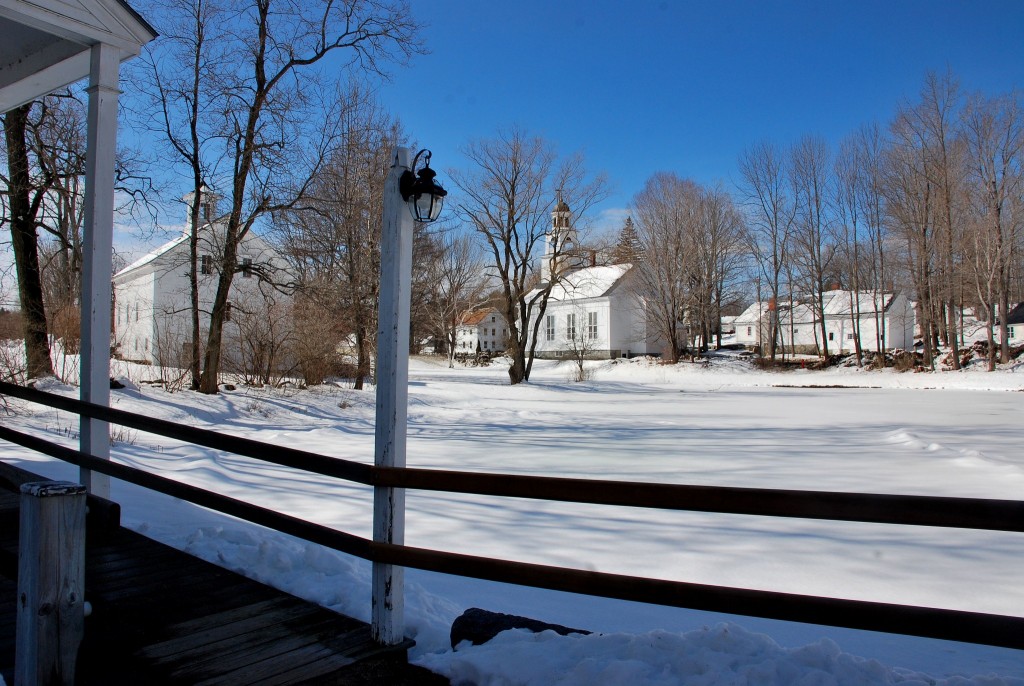 This is an out-of-the-way village just south of the White Mountains.  It’s a tiny place and mostly residential, but I think it’s one of New England’s most attractive villages. You have to go a few miles to nearby Tamworth to find gas and groceries.  Nearby is Squam Lake, where the movie “On Golden Pond” starring Henry and Jane Fonda was filmed.  You’ll find Center Sandwich on SR 113 midway between SR 25 and US 3.

Center Sandwich began as the site of a grist mill in 1763.  It’s the main village of the town of Sandwich, which was founded in 1763 and named for the Earl of Sandwich, inventor of the . . . you know what. 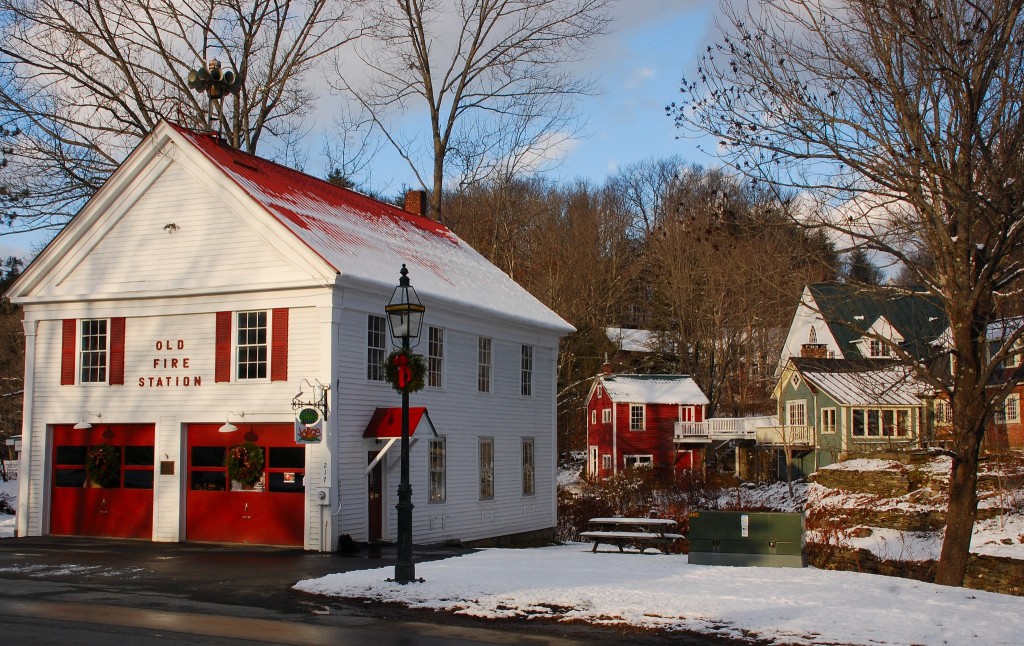 In a state where cuteness is the main tourist draw, Grafton just may be too cute.  There’s a reason for that:  It’s what happens when a down-on-its-luck village gets a big infusion of investment from a nonprofit corporation started by a rich New Jersey investment banker who fell in love with the place.

Grafton was founded in 1791 as a wool center.  When that industry declined, so did the village.  Now, thanks to the Windham Foundation, the old inn that had fallen into disrepair is a spiffy lodging that charges a pretty penny for a room and dinner.  The Grafton Cheese Co. just down the road, is also a going concern.  Residences and other businesses have likewise given Grafton the look of what a New England village should be.  Is it artificial?  You decide.

To get to Grafton, take Exit 5 from I-91, then go north on US 5 and west on SR 121 about 10 miles.  You’ll find more about Grafton at www.graftonvermont.org. 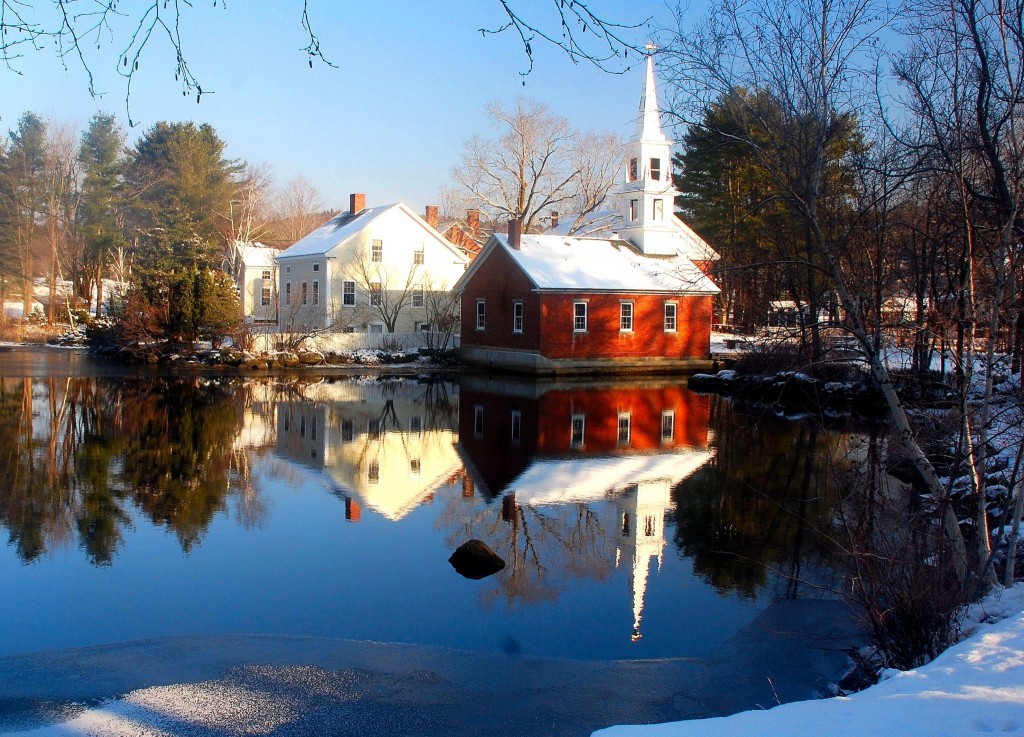 Harrisville is an old textile town in southwestern New Hampshire’s Monadnock Region.  It’s a largely intact 19th-century industrial mill complex – the only one of its kind in the United States.  Remarkably, thanks to a company called Harrisville Designs that makes thread for weaving, the village has kept its textile heritage alive.  Its brick church was built in 1797, and its general store has been in operation since 1838.  Photographers will love the way the village is reflected in the adjacent pond.

For more information, go to www.harrisville.com.

The village of Newfane is little more than a wide spot in the road, even though it’s the seat of Windham County.  Next to SR 30 is one of New England’s handsomest greens, whose centerpiece is the beautiful county courthouse.  Facing it are a couple of churches, large residences and the stately Four Columns Inn.  Directly across SR 30 is the Newfane Country Store, where you can buy a refreshment, then sit on a bench outside the courthouse and contemplate a classic New England scene — one of New England’s prettiest villages.

Rockport isn’t a sleepy New England village.  It’s just 40 miles from Boston and can be reached on a commuter train.  But it’s so darned attractive I’ve included it here.  It sits at the easternmost end of Cape Ann.  Nearby Gloucester has been around since the 1600s, but Rockport began in 1743.  It grew as a result of fishing and nearby granite quarries.  It has since become an artist colony.

The town is focused on an attractive harbor, which hosts a mix of working boats and pleasure craft.  You’ll find shops and galleries nearby, most of which are seasonal.  Interestingly, the town was “dry” until 2005 and still only allows liquor to be served in restaurants.  To get there, take SR 128 east from I-95 or US 1 to Gloucester, then follow SR 127 to Rockport. 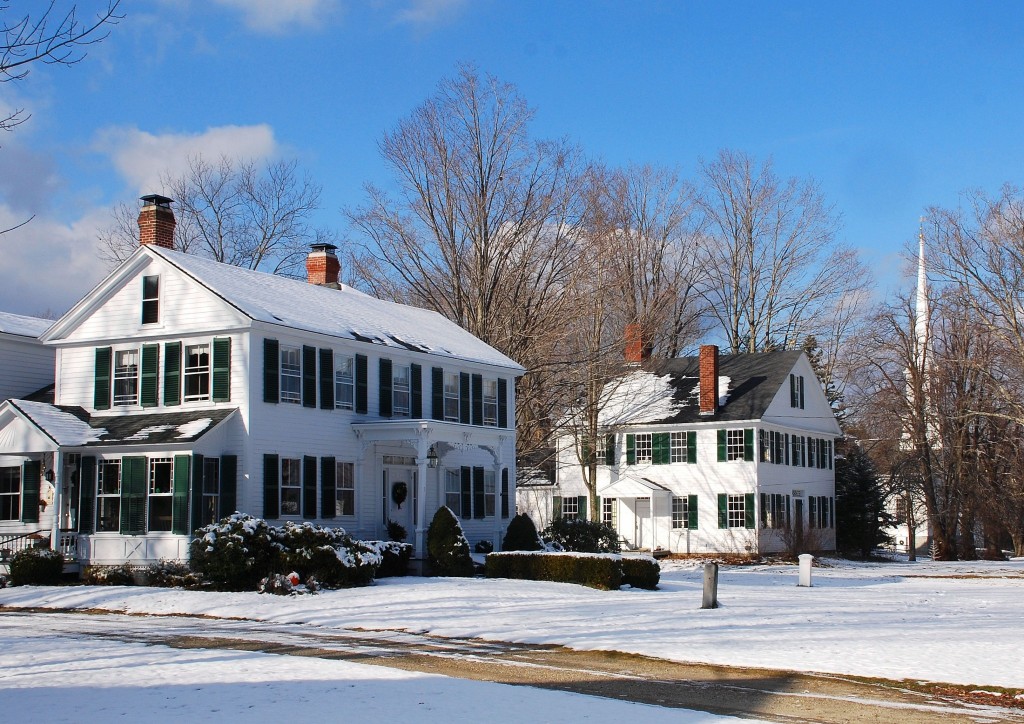 Royalston is a sleeper that relatively few non-locals know about.  It’s simply a classical New England village with a beautiful white church and a collection of historic houses.  There are no businesses; you have to drive to the larger village of South Royalston to find a store or café.

To get to Royalston, take SR 68 northwest from Worcester.  If you’re coming south from New Hampshire, take SR 32 from Keene or Fitzwilliam, but drive slowly – the road is full of frost heaves and potholes.  Turn left at the well-signed junction for Royalston shortly after crossing the state line. 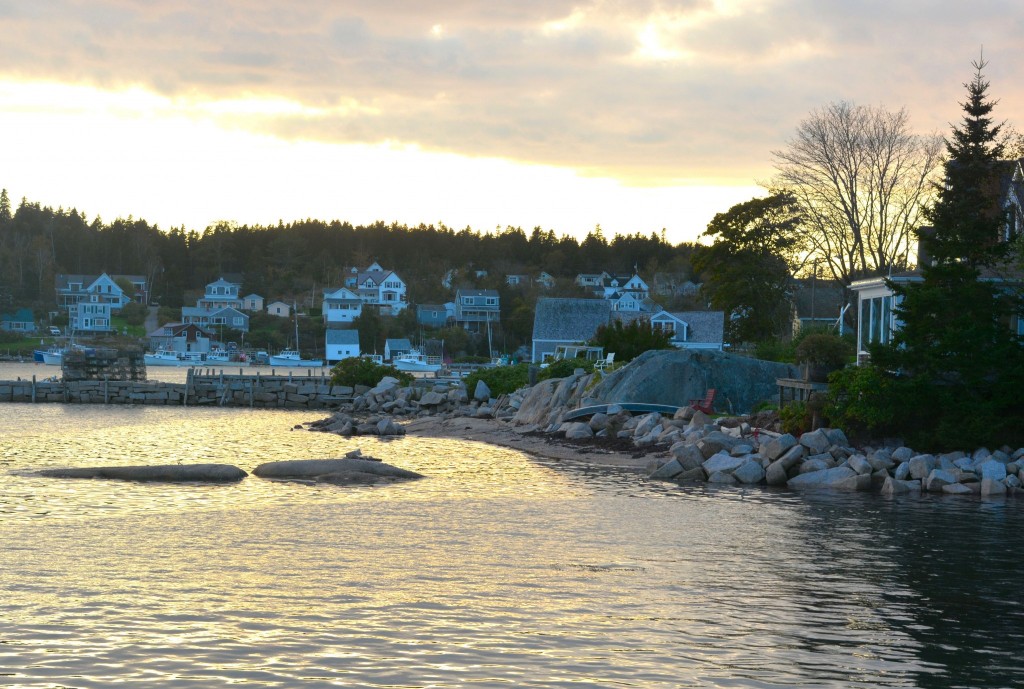 Wow!  Stonington has to be seen to be believed.  It’s not just one of New England’s most beautiful villages, it’s probably the most attractive harbor on the East Coast.  It sits on Deer Isle just off the tip of the Blue Hill Peninsula.

Stonington’s harbor is home to over 300 lobster boats.  The tides have tremendous fluctuations in this part of Maine, so the lobstermen have to anchor in the harbor and commute to and from their boats in skiffs.  Lining the harbor are handsome houses. Stonington has an interesting mix of townfolk, thanks to its position as a fishing village and its status as an art center.  Stonington is also the home port for a daily mail ferry to Isle au Haut – an offshore adjunct of Acadia National Park.

Getting there take some time.  From US 1, take SR 175 south to SR 15, then turn right and follow it to its end.  Trust me:  You’ll fall in love with this place.  Fortunately, it offers lodging, meals and gasoline, so stay as long as you like.

Here’s another place that isn’t well known, even in New England.  Washington is a tiny village with some very nice houses and not much else, with the exception of a remarkable cluster of public buildings a local constable called the “civic center” as he actually moved his police car so I could get the photo you see above.

Washington is reached via SR 31, which branches off SR 10 a few miles south of Newport.  If you’re coming from the south, you’ll find the junction with SR 31 just west of Hillsborough off SR 9. 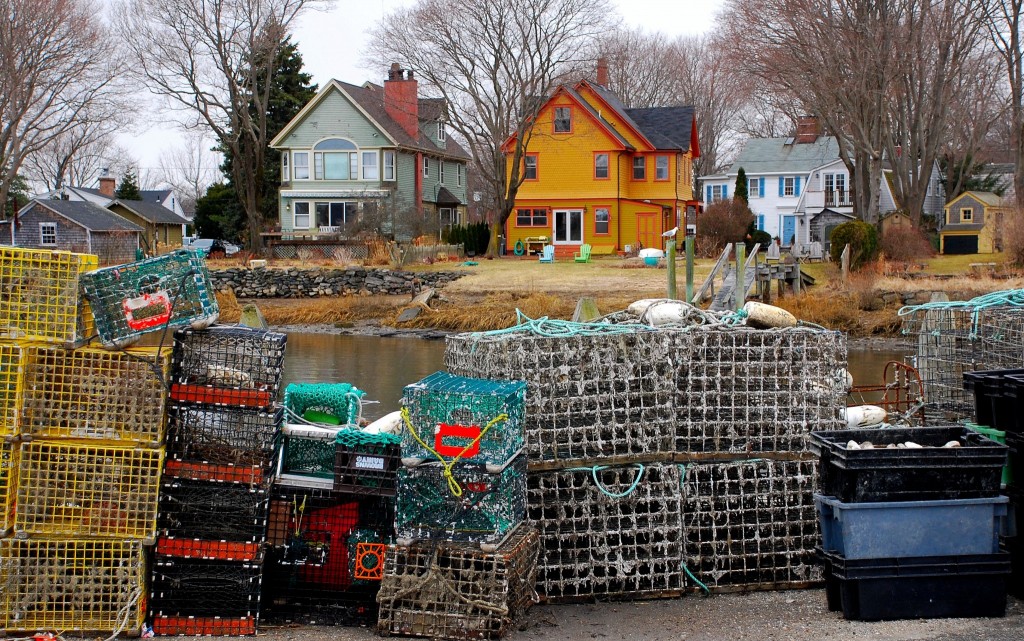 Wickford is old.  It was originally settled in the 1600s and formally established in 1709.  Today, it works hard to attract visitors.

The lures are shops and restaurants, along with handsome houses from the 1700s and a harbor used by working fishing boats and pleasure craft.  It’s a likeable place where you can easily spend a couple of hours.  You’ll find it off SR 1A a short distance south of Providence and west of Newport. 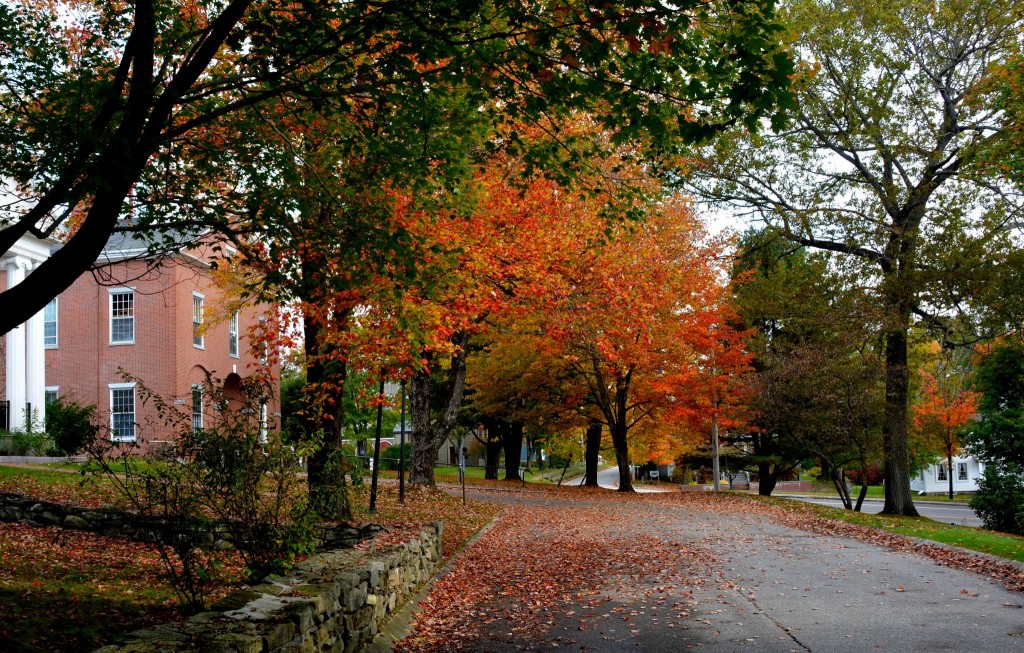 As you approach Wiscasset on US 1, you’re greeted by a sign proclaiming that this is “the prettiest village in Maine.”  I’m not sure I agree, but it is a pretty place, with a lively center and beautiful neighborhood streets with historic houses.

Founded in the mid-1700s, Wiscasset sits astride the wide Sheepscot River and has a small harbor.  From 1972 to 1996 it was home to the Maine Yankee nuclear power plant, which was decommissioned with attendant loss of jobs.  Since then, the town has relied heavily on tourism.  It’s home to Red’s Eats, a seasonal lobster takeout stand that’s one of the state’s most famous eateries.  Expect a long line if you visit in summer.

This week’s road trip takes us to Fort Scott END_OF_DOCUMENT_TOKEN_TO_BE_REPLACED

You can run out of adjectives really fast when describing END_OF_DOCUMENT_TOKEN_TO_BE_REPLACED