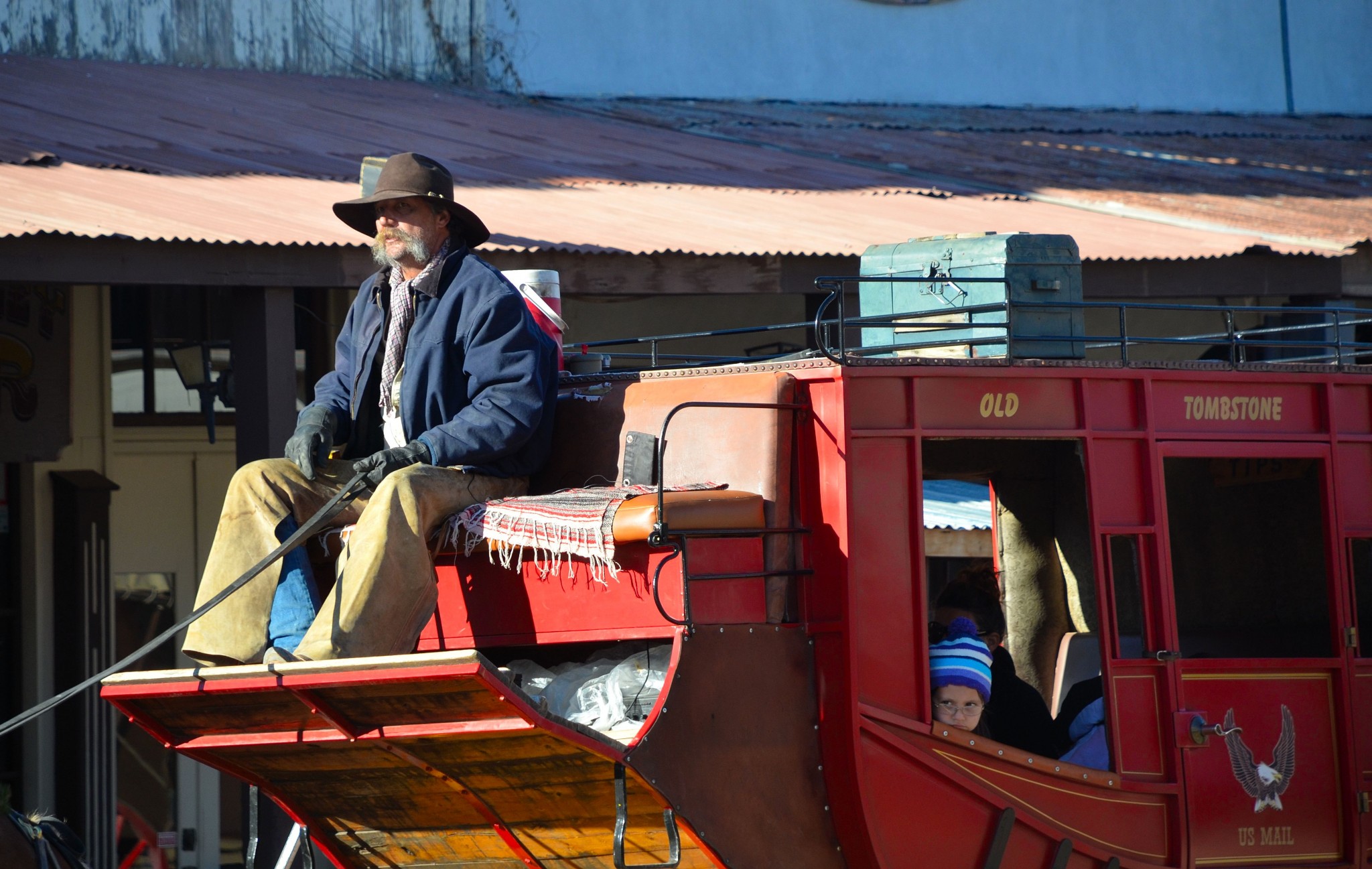 This week the road trips blog visits a pair of old mining camps in southern Arizona that offer a wealth of attractions for visitors.  Each is worth a half-day of your time.

Tombstone and Bisbee are neighbors and are often visited on the same excursion.  Both are former mining camps that have survived the loss of their mines and have moved successfully into the 21st century by reinventing themselves.  In both, an authentic historical heritage is overlain by a modern veneer.

But that’s where the resemblance ends.  Tombstone and Bisbee, despite being only about 20 miles apart, look unique and are unique.  They’ve taken different paths from what they were to what they are.  Both are well worth visiting, whether as an alternate route when you’re road-tripping along I-10 or as a day or weekend excursion from Tucson or Phoenix.  Both towns are higher and cooler than Arizona’s major cities, meaning they can comfortably be visited year-round.

Tombstone’s rise in the 1880s was based on rich deposits of silver.  Prosperity was relatively short-lived.  It ended shortly after the mines reached the water table, and mining became unprofitable.  Tombstone nearly became a ghost town, but its position as the Cochise County seat kept it afloat into the 20th century.  Since then, the town has capitalized on its boomtown heritage to attract over 400,000 tourists per year.  This is a great place to bring your kids.

Bisbee, on the other hand, was a copper town, and was known as “Queen of the Copper Camps,” although gold and silver were responsible for its founding in 1880.  Bisbee’s boom came later than Tombstone’s – just after the turn of the century.  In fact, there were two booms, the second beginning in 1950 with the advent of open pit copper mining.  When that ceased in 1975, Bisbee’s attractive setting and pleasant climate began to draw artists and other counterculture types, giving it an entirely different vibe than Tombstone’s.   Here you’ll find a mix of artists, writers, hipsters, musicians, gays and retirees, who all contribute to Bisbee’s lively cultural scene. USA Today called it “America’s best historic small town.”  AARP called it one of the country’s quirkiest towns.

Let’s start with Tombstone.  At the height of its boom in the 1880s, Tombstone had over 100 saloons, as well as schools, churches, stores and brothels.  There was even a Chinatown.  The population reached between 15,000 and 20,000 at its peak.  The most famous landmarks included the Bird Cage Theater, Schieffelin Hall (named for the town’s founder), the OK Corral, the old courthouse and the office of the Tombstone Epitaph newspaper.  All are still standing and open to visitors.  Among the colorful characters who lived here were Wyatt Earp, Doc Holliday, Ike Clanton, and Big Nose Kate, who was reputedly Tombstone’s first prostitute and later married Doc Holliday.  The town’s tourist website calls her, “The gal who loved Doc Holliday and everyone else, too.”  Tombstone cemented its reputation when it became the scene of movies and popular TV series about Earp, Holliday and the town itself.

Tombstone sits at an elevation of 4,541 feet and has a population of about 1,500.  The terrain is relatively flat, and the town is laid out in a grid.  The main drag is Allen St., which runs parallel to SR 80 a block south.  You’ll find parking at 4th St. and SR 80, and at the corner of 6th St. and Toughnut – a block south of Allen.  The latter has space for RVs.  The main concentration of shops and attractions is along a three-block stretch of Allen between 3rd and 6th Sts.  This stretch is closed to traffic and features covered plank sidewalks and tourist-oriented commerce.  Public restrooms are next to the OK Corral at 3rd and Allen, and at the corner of 6th and Allen.

Visit the old courthouse, which is now Tombstone State Historic Park (admission charged).  Don’t miss the gallows out back.  Take a stagecoach ride.  Have a sarsaparilla (or an adult beverage) at Big Nose Kate’s or the Oriental Saloon.  Skip the OK Corral, which has cheesy plywood cutouts representing the participants.  The gunfight didn’t take place at the corral anyway, but rather in a nearby vacant lot.  You’ll find plenty of shops and restaurants in Tombstone, as well as overnight lodging.  For more information, go to www.tombstoneweb.com

Continue across the desert for 21 miles, go through a tunnel under the Mule Mountains, and you’ll find yourself in Bisbee. The town’s layout is dictated by its rugged geography, as you can see in the photos above and below.  Downtown is in the bottom of Brewery Gulch, and the residential areas sit precariously on steep hills to the north.  Stop at one of the turnouts on SR 80 for a good overview of the town.

At an elevation of 5,538, Bisbee is higher than Tombstone, and with a population of about 5,500, it’s bigger, too.  In 1929 it replaced Tombstone as the Cochise County seat.  To enter the town, you take a cloverleaf to the right.   Just beyond the cloverleaf on SR 80 is the yawning maw of the Lavender Pit, evidence of Bisbee’s copper mining heritage.  There’s an overlook on your right.

Like Tombstone, Bisbee boasted a population of about 20,000 in its mining heyday in the early 1900s.  At one point it supposedly was the largest city between St. Louis and San Francisco.  It had 50-odd saloons, along with schools, churches and brothels.

The downtown streets are narrow and winding – best experienced on foot.  Parking can be difficult, but cruising around usually yields a space.  Bisbee’s counterparts to Tombstone’s garish souvenir shops and saloons are art galleries, coffee houses and brewpubs.

The town’s centerpiece is the Copper Queen Hotel, opened in 1902 and originally owned by the Phelps Dodge Corp., which operated Bisbee’s copper mines.  The hotel fell into disrepair and was sold in 1970 to a local businessman.  John Wayne was a frequent guest here and later became a partner with the owner in other enterprises.  The hotel still welcomes guests; warning:  It’s said to be haunted.

A good way to see Bisbee is on a tour.  Local operators offer historic tours, mine tours and even ghost tours.  You can find details on the town’s excellent website —www.discoverbisbee.com.  Be sure to visit the Bisbee Mining and Historical Museum on Copper Queen Plaza.  One of Bisbee’s most popular attractions is the Copper Queen Mine Tour, where you don a hard hat and ride a train into the underground mine.  Tours begin from a site on Dart Road just beyond the historic Bisbee exit from SR 80.  Most kids will enjoy this tour.

You’ll find a wide range of traveler services in Bisbee.  Among the accommodations is a motel whose rooms are vintage Airstream trailers.

This week’s road trip takes us to Fort Scott END_OF_DOCUMENT_TOKEN_TO_BE_REPLACED