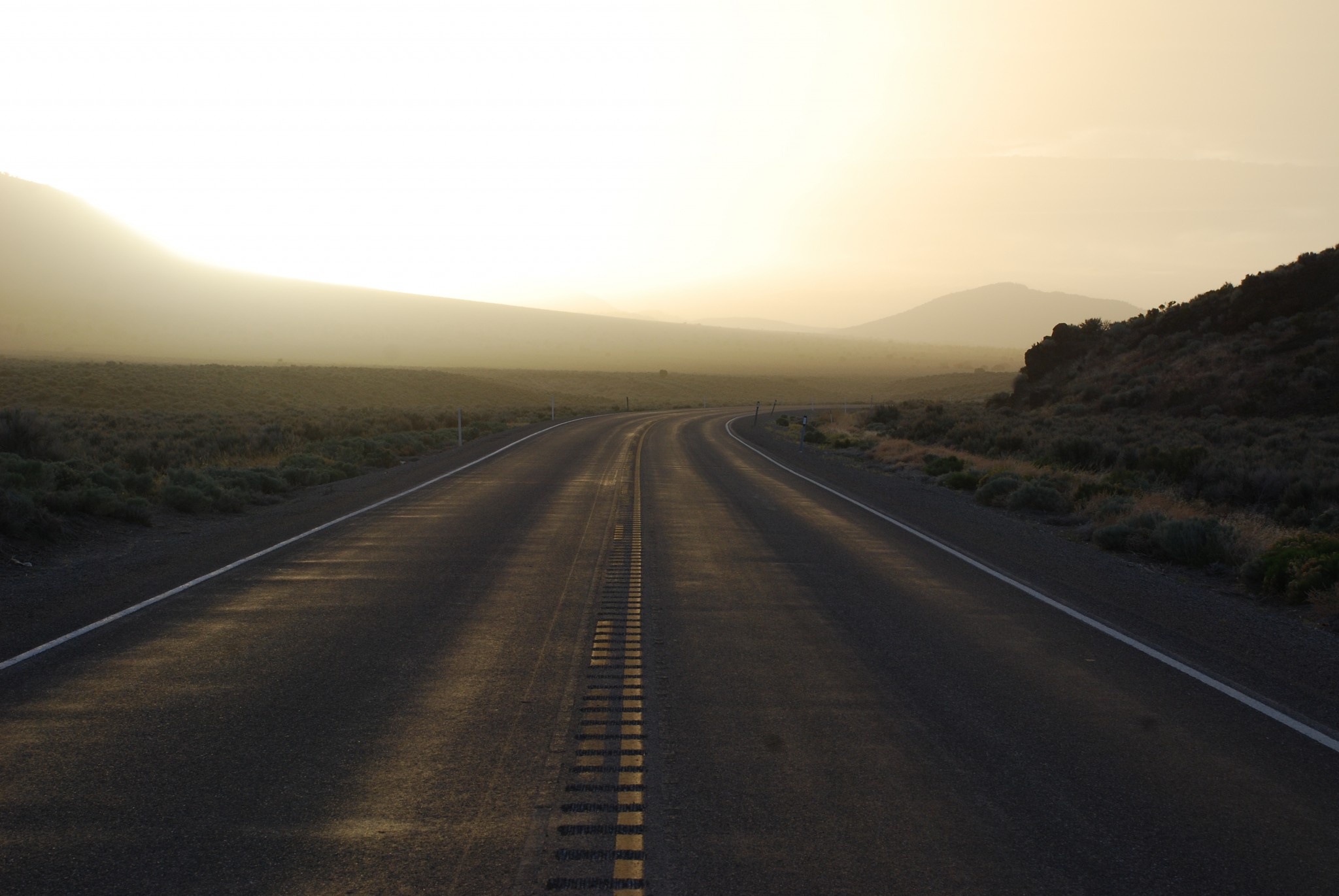 We’re going to central Nevada this week.  This post combines two closely related articles – one on a highway and the other on the national park it leads to.  Some of the photos you’ll see were taken during a prior trip in winter 2010; the rest were taken last month.

The loneliest road in America

Several years ago some local boosters decided to promote US 50 from Carson City to Ely, Nevada, as “The Loneliest Road in America.”

The premise seems a bit silly to me.  A successful promotion would draw more travelers and make the road less lonely.  Sort of defeats the purpose, doesn’t it?  Anyway, it didn’t  work.  This is still a road where you might pass another vehicle every five miles or so on a busy day.  The empty stretch begins at Fallon, about an hour’s drive east of Carson City.  From Fallon to Ely, it’s 254 miles of Great Basin desert.  Beyond Ely (population 5,000), the road is just as deserted as far as Delta, Utah, another 150 miles away.  It roughly follows the route of the legendary Pony Express across central Nevada.

The Great Basin is a series of north-south trending mountain ranges separated by long stretches of sagebrush-covered open range.  So US 50, running west to east, is an up-and-down drive as it crosses mountain passes and sagebrush expanses.  The passes are wooded with juniper and pinon pine.  The skies are usually clear out here – as blue as you’ll see anywhere – and visibility is as good as you’ll ever experience.  And if it rains, you’ll be treated to the sweet perfume of wet sagebrush, an unforgettable experience.

Why make this drive?  Well, it’s a good place to truly get away from it all.  It’s also a highway where you can drive pretty much as fast as you want to.  In places, you can see the road ahead as far as 10 or 12 miles.  The official speed limit is 70 mph.  Aside from the two-lane ribbon of asphalt, there’s nothing out here but two old mining towns – Austin (pop. 400) and Eureka (pop. 600).  Austin is a tattered shell of a town, whereas Eureka is charming, with spiffy-looking historic buildings.  Both towns have gasoline and food.  (The Pony Express Deli in Eureka is as good a small town breakfast and lunch place as you’ll find anywhere.)  Ely has all services, including a Ramada Inn and La Quinta Inn.  At Ely, US 50 joins up with US 6 for the 60-mile run to the Utah border.  I was surprised to find cell phone reception most of the way across Nevada.  Depending on your carrier, you may not.

Is this a boring drive?  Well, it depends on your state of mind.  It’s certainly a more visually pleasing experience than, say, I-15 to Las Vegas or I-10 to Phoenix.  See for yourself.

In the midst of the empty country near the Nevada-Utah border, the Snake Range rises dramatically, topping out at 13,063-foot Wheeler Peak.  Here, like an isolated island, is a different world from the desert that surrounds it.  This is Great Basin National Park, where you’ll find a glacier, 5,000-year-old bristlecone pines, forests of pine and aspen, trout streams, mountain lakes, a cavern complete with stalactites and stalagmites, great campgrounds, fall foliage, and plenty of hiking trails.  Wildlife include deer, bighorn sheep and an array of smaller varmints.  Want to see stars?  According to the National Park Service, Great Basin National Park has the clearest nighttime skies in the continental United States.

Despite the park’s attractions, it only gets about 90,000 visitors a year.  Compare that with Yosemite’s 3.8 million.  Most people have never heard of this gem of a national park.  Why?  There are three reasons:  Location, location, location.  Great Basin National Park is 290miles from Las Vegas, 240 miles from Salt Lake City, 550 miles from Los Angeles and 570 miles from San Francisco.  But if you’re looking for a worthwhile national park that’s never crowded, even in summer, fire up old Betsy and go!

Great Basin National Park is essentially a camping park.  In late October, two campgrounds were open; the fee is $12 per night.  In summer, you can also camp at Wheeler Peak campground (elev.10,000 feet), at the upper end of the scenic drive.  This is the trailhead for the alpine lakes, the bristlecone pines and the summit of Wheeler Peak.

The nearest AAA-approved accommodations are 60 miles away, in Ely.  Not far from the park entrance is the very rustic motel where I stayed.  It was okay, but I wouldn’t bring my wife there.

The park has no entry fee, but tours of Lehman Caves cost $8 to $10, depending on which tour you select.  Cave tours are offered year-round.  The park has two visitor centers, and ranger programs are conducted in summer.  For more information, check out the park’s web site at www.nps.gov/grba.

This week’s road trip takes us to Fort Scott END_OF_DOCUMENT_TOKEN_TO_BE_REPLACED

You can run out of adjectives really fast when describing END_OF_DOCUMENT_TOKEN_TO_BE_REPLACED