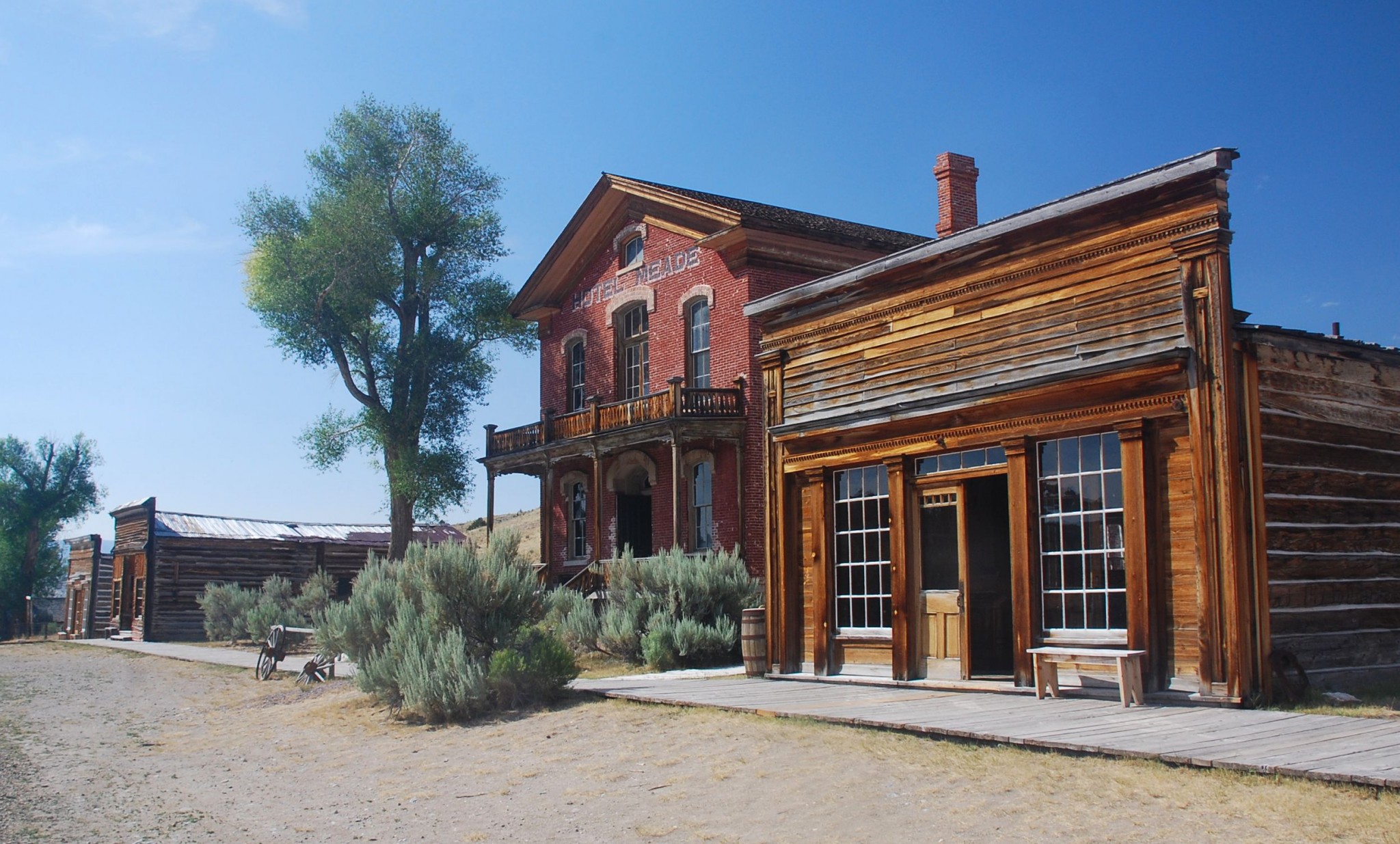 I love Bannack.  Chances are, you will, too.

It’s one of the two most intact, authentic ghost towns in the American West; the other is Bodie, California.  We’ll feature both in this blog, beginning with Bannack.   Why start with Bannack?  Easy:  I have digital photos of Bannack but none from Bodie.  That will be rectified this fall, and Bodie will be featured in November.  Bannack is only 2 ½ hours from Yellowstone, which makes it easy to visit if you’re headed that way on a road trip.

There are literally hundreds of ghost towns in the West.  Most were born when gold and/or silver were discovered, mushroomed almost overnight into cities with stores, banks, newspapers and brothels.  They then decayed or were abandoned when the mines played out.  Some have been tarted up for the tourist trade (Virginia City, Nev., Tombstone, Ariz., Barkerville, B.C.).  Others, such as Aspen and Park City, became ski resorts.  Still other hung on as living shells of what they once were.  Most, however, became piles of rubble where the loudest noise is the rustle of sagebrush swaying in the wind.

Bannack, on the other hand, became a state park.  Buildings are maintained in a state of “arrested decay.”  That means they won’t be restored to their original state, but they will be preserved from further deterioration caused by the elements or vandals.  There are no gift shops or restaurants here.  No inns or B&Bs.  Just 60-some buildings, many of which you can enter.  In other words, this is the real deal.  It’s not a stretch to visualize what life must’ve been like here 150 years ago.

Bannack was born when gold was discovered in Grasshopper Creek in 1862.  Within a year, it was a city of 3,000 people.  The following year, it was named territorial capital of Montana.  That was short-lived, however.  Gold was discovered in Virginia City (Mont.), and many miners, as well as the capital, went there. Bannack remained the seat of Beaverhead County until 1881.

Like many of the old mining camps, Bannack had a reputation for lawlessness.  The most nefarious crook was the sheriff, Henry Plummer.  During 1863, he and his gang murdered over 100 people.  The next year, a vigilante group captured and hanged Plummer and his two primary lieutenants.  By then, gold fever had begun to abate in Bannack, and the town was bleeding population.  Mining continued sporadically until about 1930.  The State of Montana took over the property in 1950.

The nearest town of any size is Dillon, which is the first Montana town you hit when you drive Interstate 15 north from Utah and Idaho.  To get to Bannack from Dillon, take Exit 59, then drive west 17 miles on SR 278.  At a signed junction, drive south on a gravel road (okay for passenger cars most of the year) another 7 miles to Bannack.

The park is open daily 8 a.m.-9 p.m. in summer, 8-5 rest of year.  Admission is $6 per vehicle.  There’s a campground costing $24-$28 per night, depending on season.  While the park is theoretically open all year, this IS Montana, and winters are nasty here.

You’ll find ample accommodations and visitor services in Dillon.  Keep in mind that Dillon is the only place on I-15 between Idaho Falls, Idaho, and Butte, Montana, that’s more than a dot on a map.  That’s a distance of nearly 200 miles.  You’ll need to make room reservations just about any time of year.

This week’s road trip takes us to Fort Scott END_OF_DOCUMENT_TOKEN_TO_BE_REPLACED

You can run out of adjectives really fast when describing END_OF_DOCUMENT_TOKEN_TO_BE_REPLACED